Courtesy of The Buchan Group. Photographer: Murray HedwigAt the Christchurch Art Gallery in New Zealand, you can observe how the building’s   design connects to the natural environment that surrounds it, as well as its cultural ties to the town after which it’s named. The shimmering, undulating glass façade is reminiscent of the ripples in the […]

At the Christchurch Art Gallery in New Zealand, you can observe how the building’s   design connects to the natural environment that surrounds it, as well as its cultural ties to the town after which it’s named. The shimmering, undulating glass façade is reminiscent of the ripples in the winding River Avon which has become a symbol of the old, as well as the new settlements. Punting along it is a well-established Christchurch pastime, now made a little glitzier for tourists (tourism being New Zealand’s largest industry).

To David Cole, the design architect and director of the Buchan Group, the link between the building and the Avon are not accidental. He says the “glowing glass and metal sculpture wall is intended to evoke the sinuous form of the river. Curved pools of water at its base also echo the Avon and create an impression of constantly changing light.”  Such environmental changes are important elements of biophilic design. 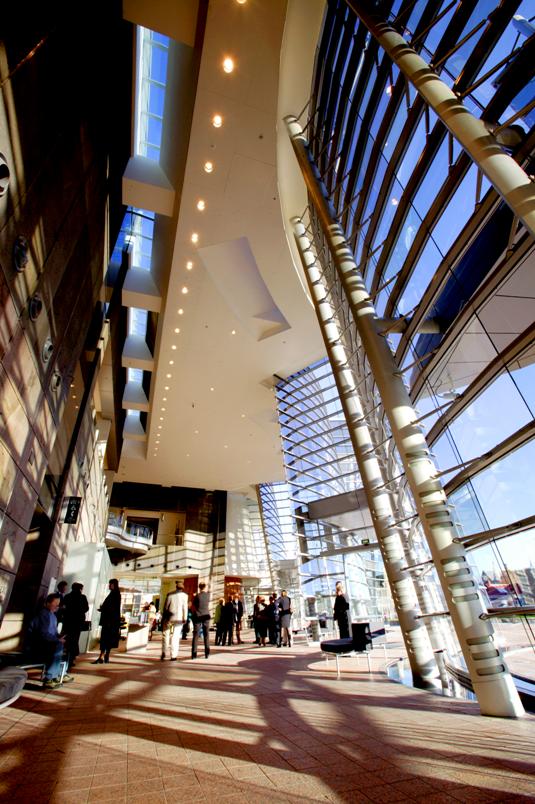 Inside, the lobby space is filled with light dappled by the form of the wall itself.  The experience of being there is similar to being under water or in a forest, both very appropriate in this river-bisected, wooded town. Dappled light is highly valued by human beings; it’s comforting in a fundamental, primordial way.

New Zealanders like to talk about their attachment nature. This is evident everywhere, even in the hard-surfaced sculpture garden that fronts the building, where foliage is never out of view. In addition, Cole tells me that the masonry forms of the gallery spaces are intended to evoke “the strong formal architectural heritage of Christchurch.”

The gallery, which opened in 2003, is the setting for a broad assortment of cultural activities that are an integral part of life here. Locals can take part in programs that may be as varied as crafts workshops, live performances associated with the world buskers’ festival, discussions with Maori playwrights, movie screenings, and live music performances.

The Christchurch Art Gallery embodies some of the finest aspects of New Zealand: a respect for the natural world, traditions, and change that enhances life experience. The nonverbal communication of these themes is expressed through the modern architectural form that resonates with the self-image of people in this area, drawing them into its folds (literally).

Sally Augustin, PhD, is a principal at Design with Science . She is also the editor of Research Design Connections and the author of Place Advantage: Applied Psychology for Interior Architecture (Wiley, 2009). She can be reached at [email protected] .

Sally Augustin’s previous post in this series was about a rural library in Texas.