Zaha Hadid Architects blends the historic and the futuristic for the Antwerp Port Authority’s new headquarters. 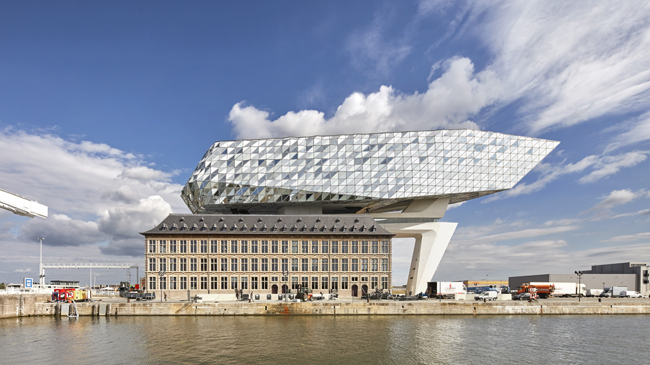 A shimmering glass cloud atop a century-old fire station makes up the new headquarters of the Port Authority of Antwerp.

​Zaha Hadid’s second posthumous project to be completed (after the oyster-shaped Maritime Terminal in Salerno, Italy, this past April) is the new Port House in the Belgian city of Antwerp. Composed of a restored early–20th century fire station with a new 364-foot-long glazed structure above it, the building overlooks both port and city, and shimmers as if in motion, an effect amplified by a massive angled concrete “leg” and cantilever at one end, and faceted triangular glass panels on the other.

Does the crystalline shape reference Antwerp’s diamond trade? And is its angular nose a ship’s bow and a nod to the city’s maritime past and present? According to project director Joris Pauwels, a senior associate at Zaha Hadid Architects, “all these connotations are there,” but for the practice “the shape of the volume is more to do with how it reacts to the external context, the way it opens up toward the city, and how you see it from a distance and perceive it as you arrive on the site.”

The overall impact on arrival is far from subtle, but then again, it isn’t supposed to be. The Antwerp Port Authority, which manages one of the largest ports in the world, wanted a landmark building that would stand out in an industrial cityscape and could house its 500-strong staff in one state-of-the-art HQ, explains Pauwels. “They operate at a very high level of competence, technology, and sustainability, and they wanted a building that could represent that,” he says (the new HQ has achieved a BREEAM Very Good rating).

Inside, the Port House is largely open-plan and designed to foster an activity-based working approach; the only exceptions are meeting rooms, an office for the president of the Port Authority, a panoramic boardroom that faces the harbor on the seventh floor, and an auditorium on the other side of the same floor, with equally scenic views of the city. “This is a space for hosting delegations and showing off the city and port landscape,” says Pauwels as we enjoy hair-raising drop-down views of the patterned square below through the angled glass. 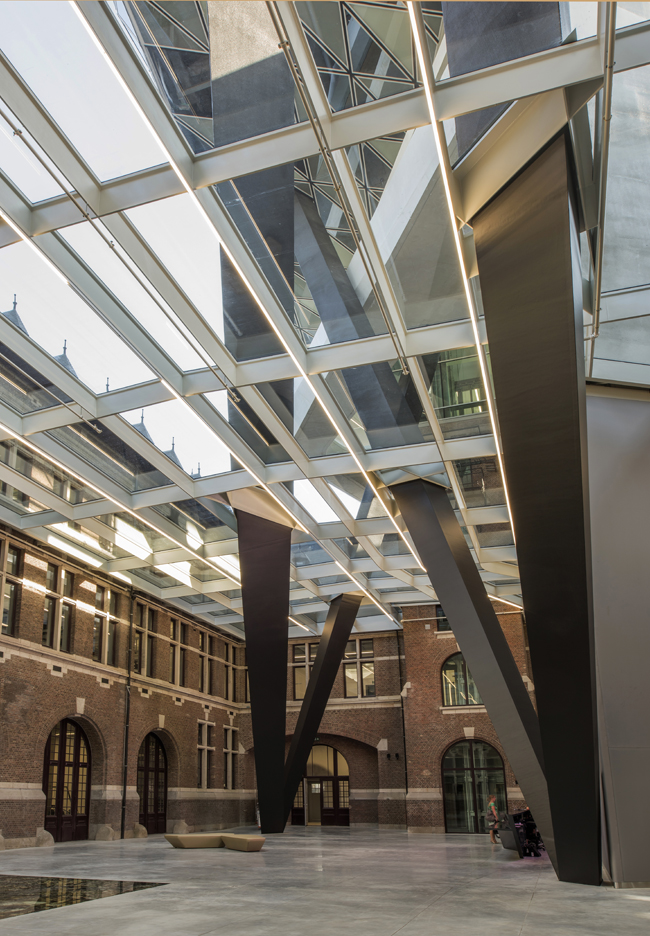 ZHA worked with heritage consultants Origin to restore the fire station. Columns grow out of the central atrium of the building to hold up the extension.

Whereas the addition is organic, asymmetrical, and all about memorable views, some framed or cut out by the triangular glass panels that have been back-painted for shading, the existing building is characterized by solid rectilinear spaces and smaller glazing. For Pauwels the two buildings are complementary. “If we had made something with repetitions of windows and bays like the existing building, it wouldn’t have worked,” he says. “The detail of the existing building works very well with the more uniform material cloud on top.”

It’s in the sheer chutzpah of bringing two such contrasting elements together that the Port House shows its ambition. The juxtaposition is unsettling and from a distance even bizarre-looking—but the engineering innovation it took to create the building pays off in sheer drama.

The new building is supported by two concrete pillars that house elevators and stairs, as well as two V columns that land forcefully, but with great precision, in the central atrium. Connecting these two cores and “holding the whole structure together,” as Pauwels says, is a walkable 360-degree outdoor concrete bridge or “ring” on the fifth floor that feels akin to the bridge of a ship. From here you can see the chimneys, roof, and brickwork of the existing building and its reflection in the geometric underbelly of the new volume.

Elsewhere the triangular panels pick up the surrounding water and the ever-changing light, creating interesting geometries inside the building and ripples along its facades. This constant play of light and shade, the contrast between the masses of the structures, and the way the spaces make you feel as if you’re hovering in the sky make this building another unique addition to Hadid’s bold and pioneering legacy. 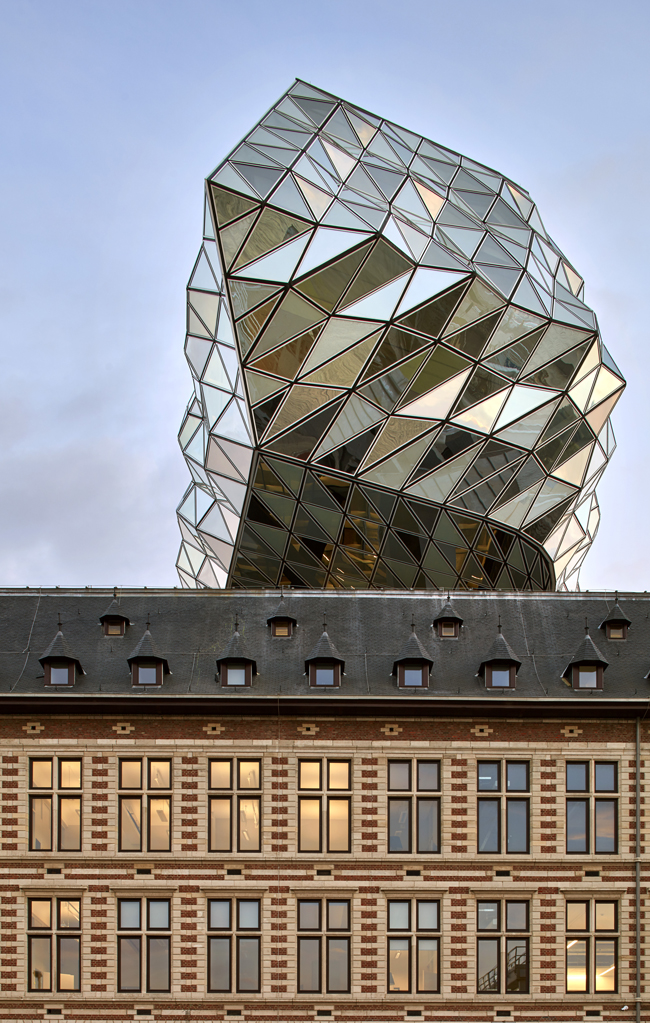 The facade of the new extension consists of  Saint Gobain Cool-Lite KS 147 glazing with profiles from Schüco and Jansen. 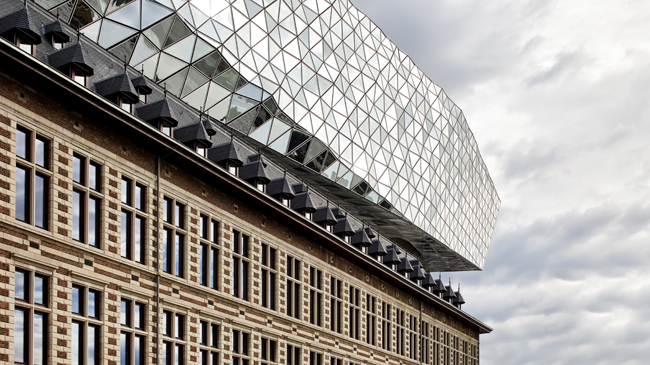 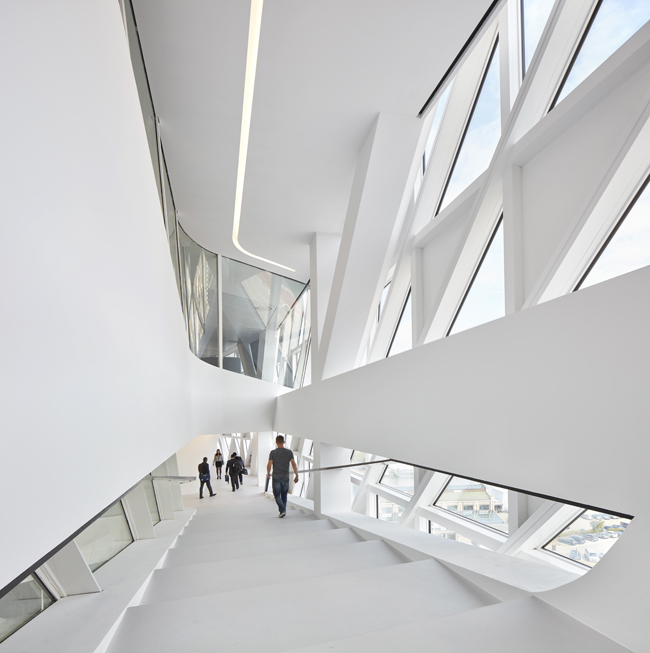 The offices in the restored fire station are sunlit, open-plan spaces, with the stairways providing a transition to the more expressive architecture above. 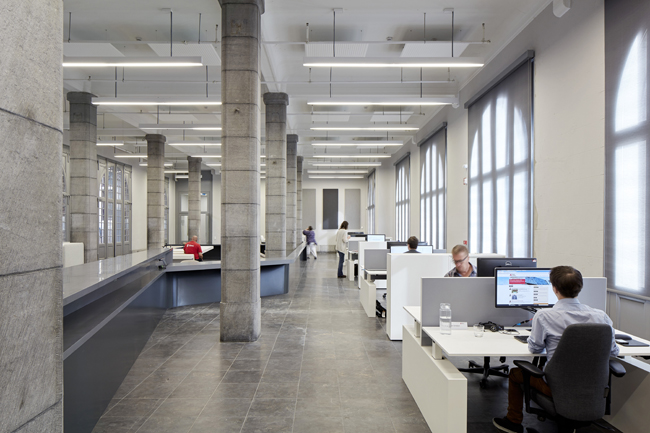 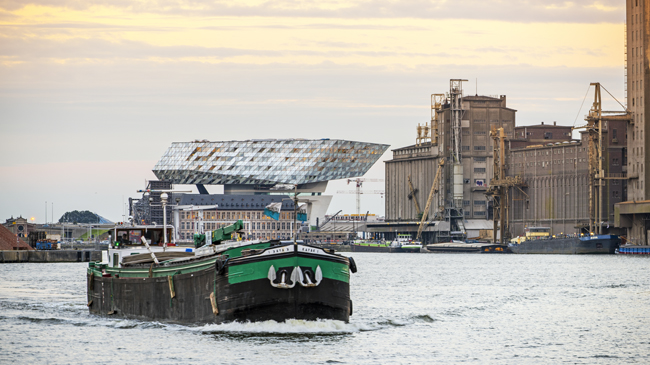 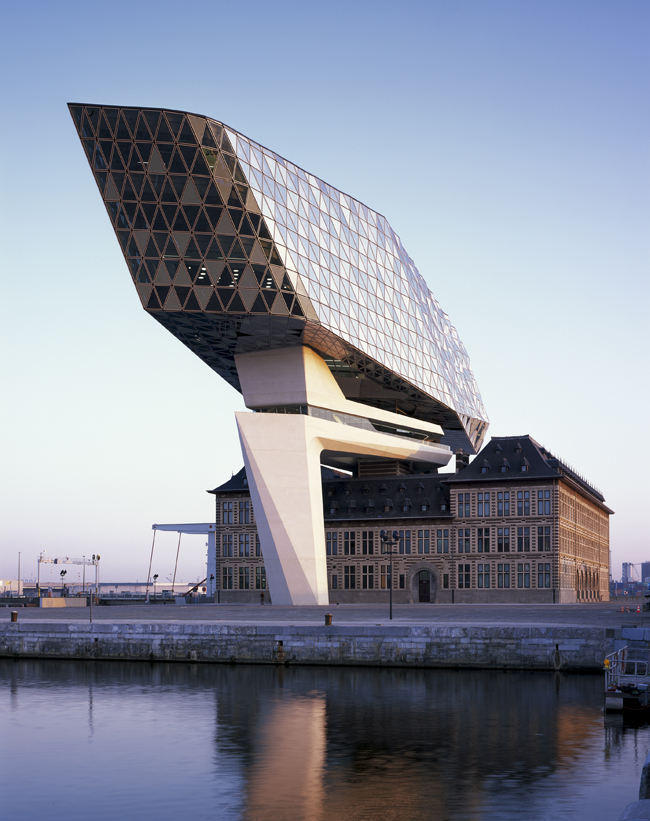 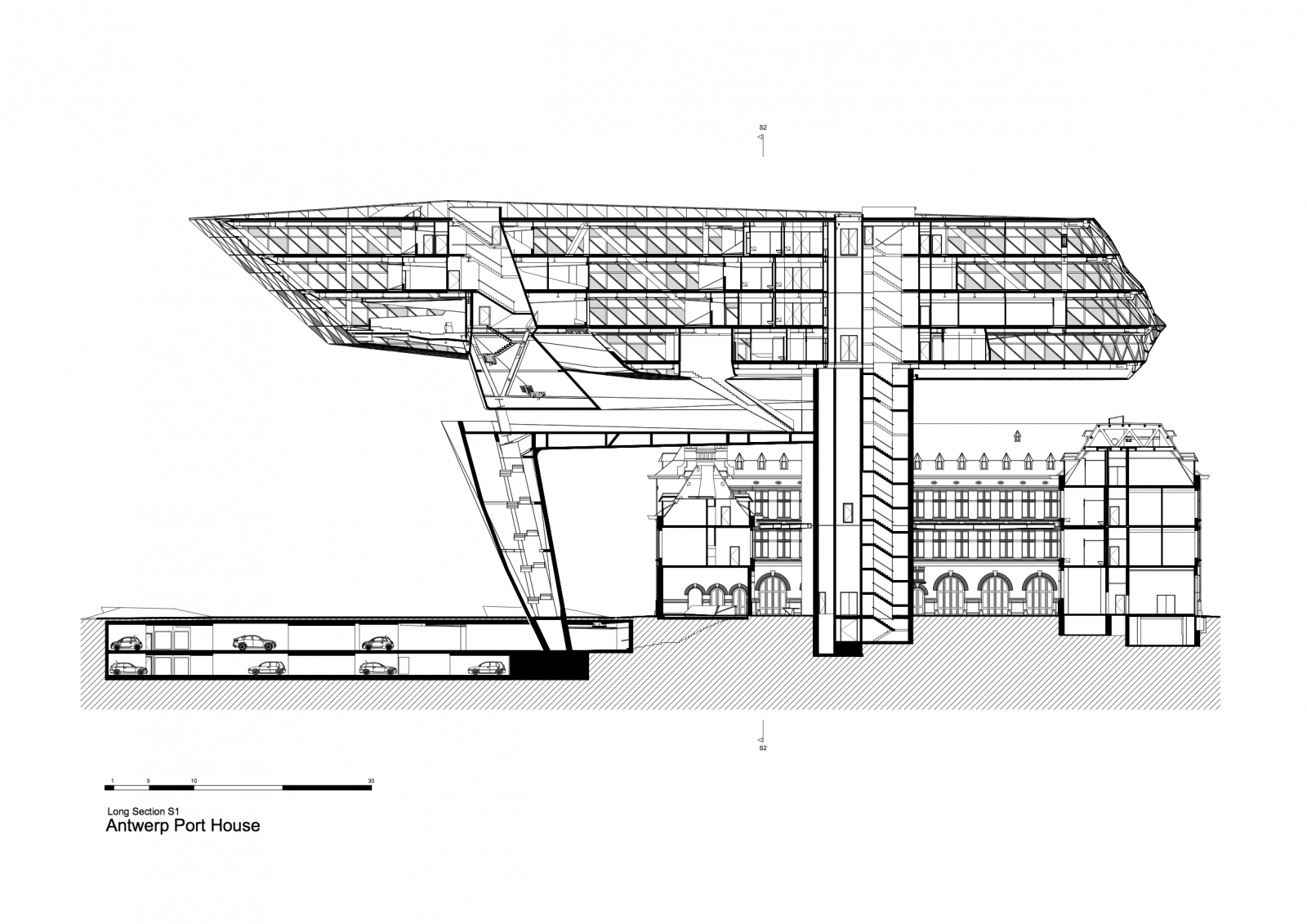