Amidst all the post-Sandy commotion and the excessive media coverage, it was confusing to keep up with all that was going on, be it just a few blocks away or in the far reaches of the wide spread New York City. This was further compounded by media outlets scrambling to report properly on the unprecedented storm; their efforts were patchy, to say the least. Last week when I sat down with Local Office Architects, Walter Meyer and Jennifer Holstad to discuss their projects, I was taken aback by their description of the degree of destruction on the Rockaway Peninsula. But I was also positively surprised to learn of the relief efforts they described (and were intrinsically involved with, having spearheaded some of them), and some of the initiatives to bring that beleaguered community back to life. 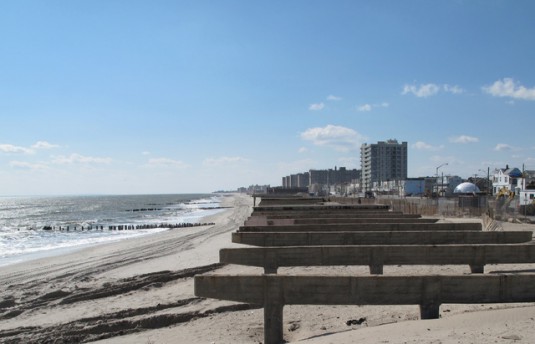 One initiative, PS1’s VW Dome 2, officially opens this Friday, March 29th. The temporary dome (a slightly smaller scale version of the one installed at PS1’s courtyard, gifted by VolksWagen) aims to give the  Rockaway community a place to gather and be inspired, whether they’re hosting talks, watching movie screenings, or taking in exhibits. 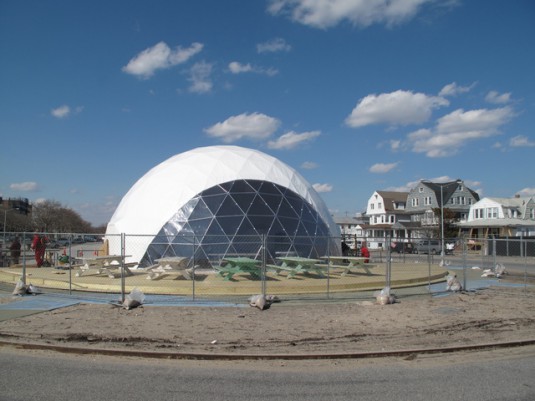 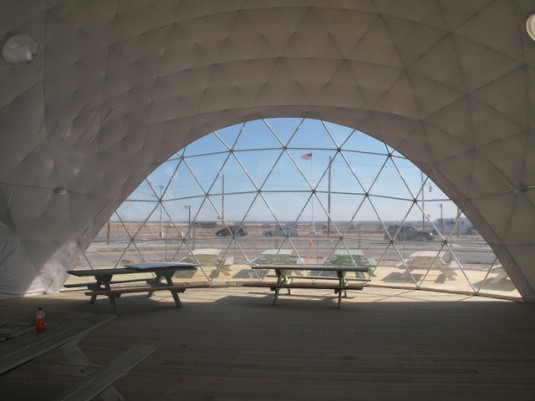 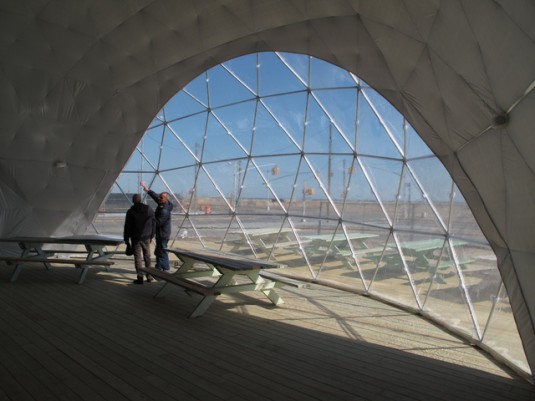 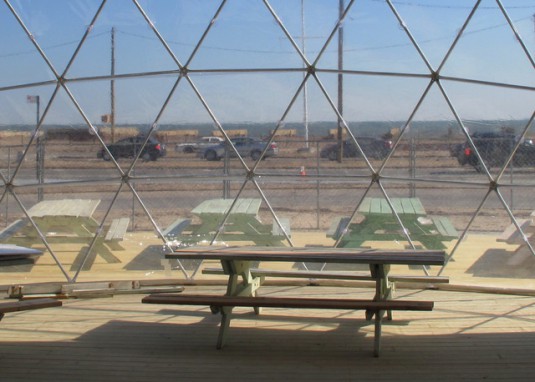 The project was initiated by Klaus Biesenbach, director of PS1 and part-time Rockaway resident. It reflects his belief that this is a time for visions and ideas about the area’s moving forward, not just for the obvious, relief support. Earlier this year, PS1 and MoMa’s department of Architecture and Design, went in search of creative new visions for smart development solutions for the area; they put out the “Rockway Call for Ideas.” The top 25 submissions will be part of “Expo1: New York,” on view at the Dome starting April 15th. Beyond the Dome itself, how it came to be is telling of the momentum in the area. It grew from a balanced mix of institutional, corporate, and good-old-fashioned community spirit. It was through that community spirit that Biesenbach was connected to Power Rockaway Resilience, the non-profit organization started by the architects, Walter and Jennifer. Biesenbach was introduced to them by David Selig, a sustainable food pioneer instrumental in setting up the Dome project. Then Power Rockaway Resilience, together with Solar One’s R. David Gibbs, designed the installation of the solar panel array on loan from Columbia’s “Solar Journey USA” project; solar generators were donated by Solar City. Further engaging the residents, Gibbs, will be leading workshops at the Dome (in association with the Rockaway Waterfront Alliance) on the basics of solar energy, so the technology can be applied to the rebuilding by the local work force itself. 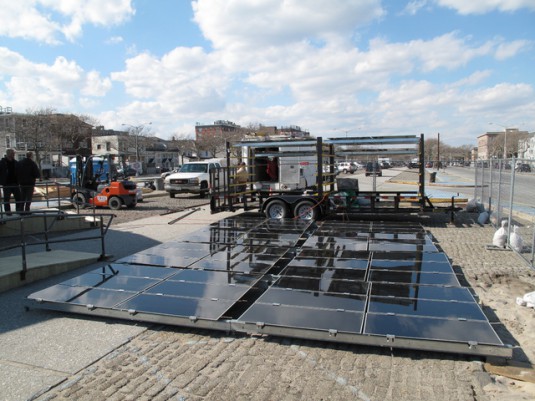 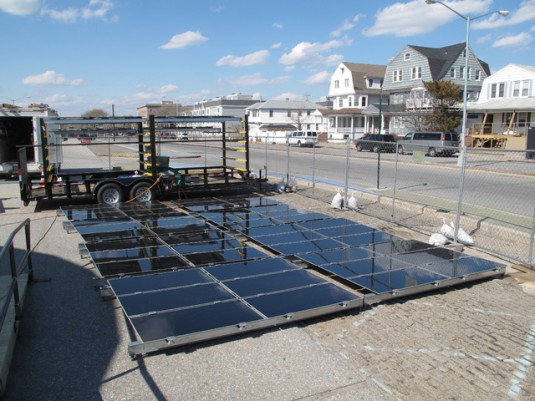 “The Rockaways is where New York City meets the Ocean and right now it is at this interesting nexus–the natural phenomena having created an opportunity to discuss its implications right there in the field where it happened,” Walter told me. “It’s a time for as much cultural resilience as environmental,” he added. The Dome’s duration is not yet determined beyond the end of May. But even if it’s temporary, the structure signals an opportunity to bring back a hard hit area and, possibly, improve on it. As Patti Smith says on PS1’s video on the Rockaways, “Somethings you can not rebuild. You have to find the new and better way to start over.” 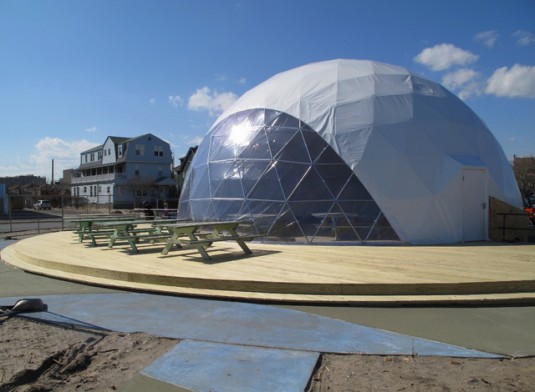 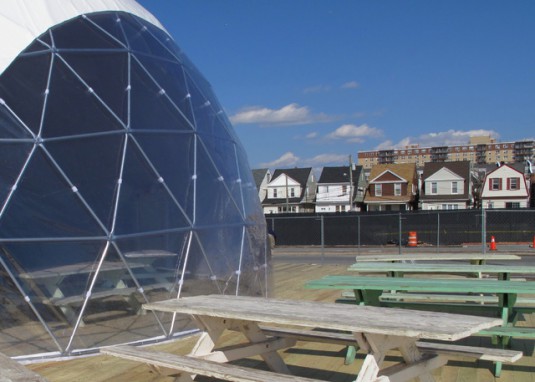 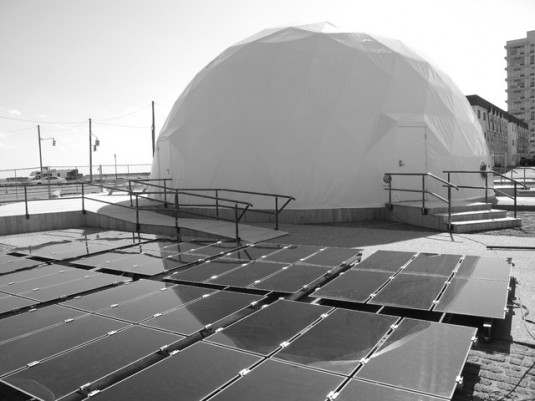 It was a very cold, yet gorgeous sunny first day of spring, when I arrived to check out the Rockaways. The crisp blue sky could not make up for the stale, desolate feel in the area. But once my eyes adjusted to it, I could see the underlying hints of resurgence. And the Dome, sitting serenely at the heart of the peninsula, is poised to become a creative engine of that resurgence. 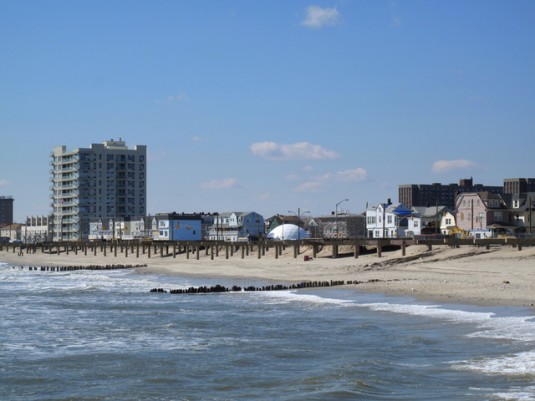 Almost 60 years after Buckminster Fuller secured its patent, the geodesic dome once more will nod towards the future and become a harbinger of good things to come. Photographs by Paul Clemence.