Le Corbusier designed a chaise longue, Mies van der Rohe had his Barcelona chair, and a bench by Frank Gehry was auctioned at an estimated $150,000 last year at Sotheby’s. Starchitects don’t just design buildings, and Zaha Hadid is no exception. An exhibition of her product designs, Zaha Hadid: Form in Motion, will open at […]

Le Corbusier designed a chaise longue, Mies van der Rohe had his Barcelona chair, and a bench by Frank Gehry was auctioned at an estimated $150,000 last year at Sotheby’s. Starchitects don’t just design buildings, and Zaha Hadid is no exception. An exhibition of her product designs, Zaha Hadid: Form in Motion, will open at the Philadelphia Museum of Art (PMA) on September 17th.

Lacoste Shoes in leather and rubber, designed in 2008 by Zaha Hadid.

Hadid is no stranger to solo exhibitions—two very large ones were mounted at New York’s Guggenheim museum and London’s Design Museum in 2006 and 2007 respectively. And some of the objects on display at the PMA have been part of those exhibitions—Hadid’s Mesa Table, an organic branched table designed for Vitra in 2007 was displayed at the Design Museum show. But this will probably be the first exhibition to solely focus on her product design work, and as such is an unusual recognition for a major architect. 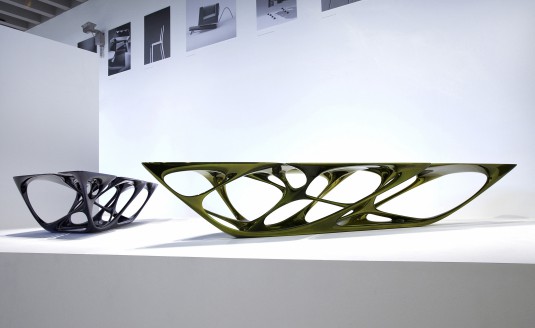 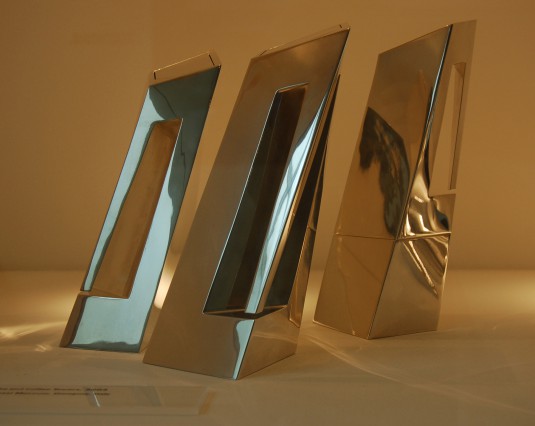 The objects themselves are faithful miniaturizations of the trademark Hadid style. A sharp and angular coffee and tea set designed in 1995 might be a splinter out of one of her famous renderings from that time, re-created in silver. The purple tendons of Hadid’s 2008 Melissa shoes look like they might have been yanked out of her 2007 design for the Abu Dhabi performing arts center. Among architects, her buildings are often considered brilliantly avant garde. In the world of product design, where artisanship and superminimalism have become the big trends, her work sticks out even more. 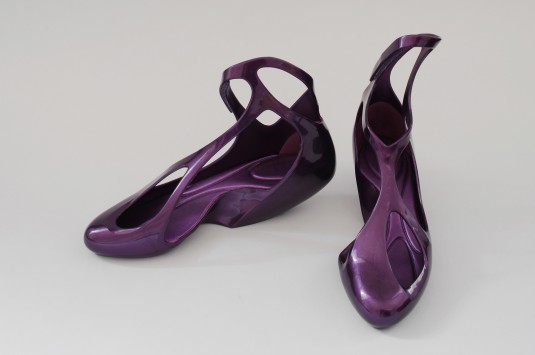 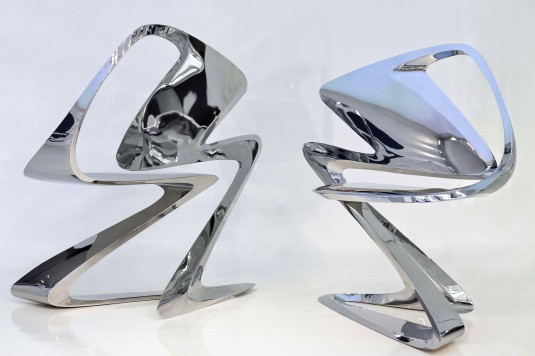 Celebrity architects rarely talk of their smaller designs as anything other than amusing side-projects. Zaha Hadid takes her product design works seriously enough to design the PMA’s exhibit herself. According to curator Kathryn Bloom Hiesinger, this gallery will be a “spatial compostion that ebbs and flows in wave-like movements, manipulating the viewer’s understanding of space.” 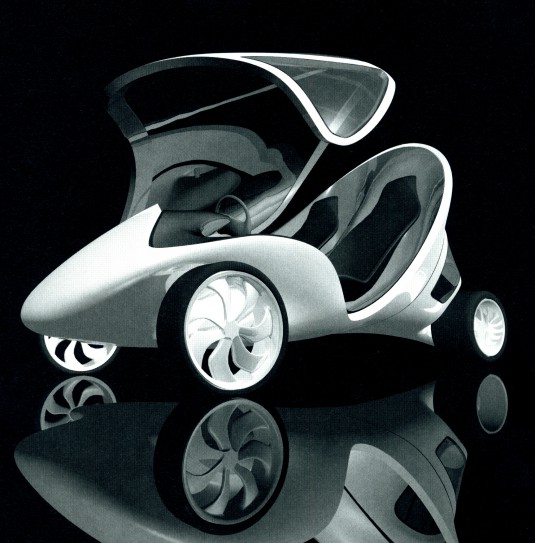 There seems to be a concerted effort to underline the dynamism of the objects—the show is subtitled “form in motion”—but the designs look rather sculptural and bulky.  In a recent review of Zaha Hadid’s London Olympics Aquatic Centre, the critic Rowan Moore put his finger on exactly this conundrum. “Her style seems to be about dynamism and weightless modernity,” he says, “but her buildings are actually massive. They are slow, not fast. They reflect an old idea, common to Palladio and Le Corbusier, that architects sculpt and shape and compose.” This seems to become only more apparent when Zaha Hadid’s architectural vision is scaled down.