The Arup fellow and director of the UCSF Medical Center at Mission Bay discusses the future of hospital design. 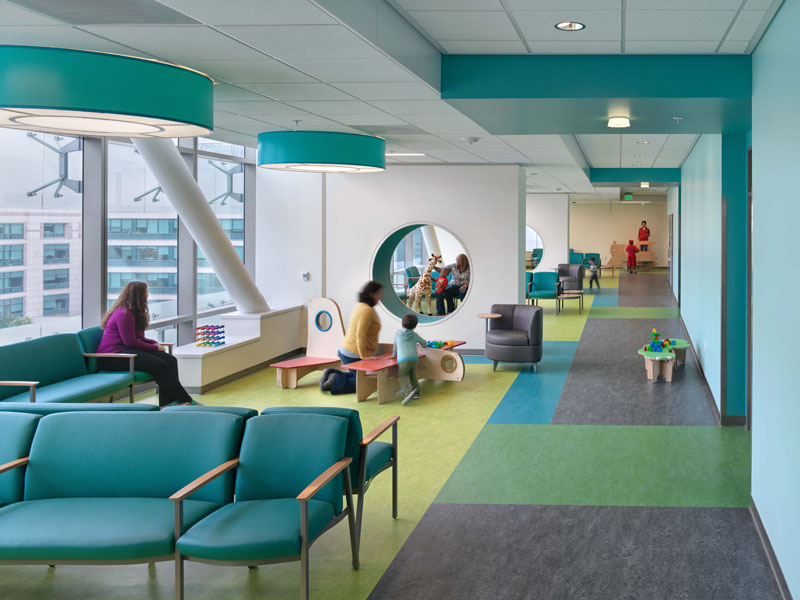 Energy reduction played a key role in the sustainable design of the UCSF Medical Center at Mission Bay. To optimize daylight, the lighting, engineering, and architectural teams worked together closely to orientate the facades of the women’s, children’s, and cancer-patient wings toward the north and south.

In February, the 878,000-square-foot UCSF Medical Center at Mission Bay in San Francisco opened its doors to the public, on schedule and under budget—no small task considering that many facilities encounter project-cost overruns and delays on the road to completion. Having led or contributed to the design of more than a dozen medical centers, Alisdair McGregor—Arup fellow and director of the Mission Bay project—shares his thoughts on what we can expect from the future of hospital design.

Tamy Cozier: Was it difficult to integrate sustainability into the UCSF Medical Center at Mission Bay?

Alisdair McGregor: Mission Bay was an integrated design delivery project. DPR Construction, UCSF, and Stantec—with William McDonough assisting in the early phase—all worked together to meet our goals. In the early stages, we set up energy targets and then worked backwards from there. For example, we went to the architectural team at Stantec and told them they could do anything they wanted on the facade as long as they met certain performance parameters. That enabled them to design a facade and building without us having to come back to them and say, “Oh, you have to start from scratch because you aren’t meeting our energy targets since you’ve got too much unprotected glass.” That happens in a lot of design projects where you have a linear process rather than having everyone in the room together sharing information.

TC: How do we approach design in a way that doesn’t put pressure on hospital budgets, which are already strained?

AM: You start by looking at energy costs, because every dollar you save there is going directly to your bottom line.If you’re operating at a five-percent profit margin, you have to get $20 of new revenue to put $1 into your profit margin. But energy savings, or efficiency savings, do have a big impact. For example, chilled beams are now another viable option for reducing energy consumption in hospitals. They’re basically like a radiator that sits up in the ceiling and allows you to separate the ventilation system from the heating and cooling systems. So you can use water to heat or cool the space, and supply 100-percent outside air at a much lower volume to provide ventilation. The Kaiser Permanente Hospital in San Diego is actually the first major hospital in California to use chilled beams in patient areas. 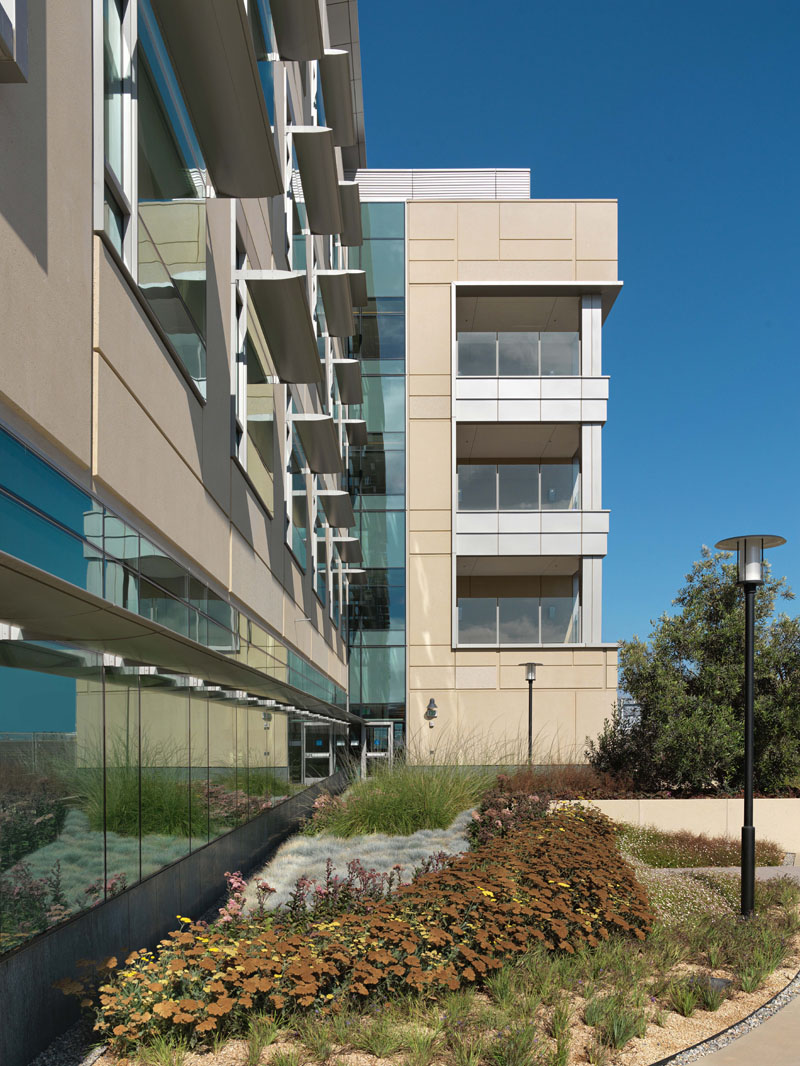 Twenty-four separate gardens and outdoor areas for respite accent the UCSF complex. The project’s plans include more than 1.1 acres of green space on the rooftop and 3.2 acres on the ground. The size of the roof’s green space is one of the highest among urban medical centers in the United States.

TC: How should we approach creating better, more functional hospitals?

AM: My opinion is that narrower floor plates—or at least certain locations where you can access the outside if you can’t get a smaller floor plate—should be an essential part of the design. From an engineering standpoint, we try to promote what you call loose fit, so that we don’t squeeze down the floor height and the floor space for mechanical systems or electrical rooms. We also need to think about how we can make open, mixed-use spaces that are good for reducing patient stress, while also being great for the staff to work in.

TC: How did you go about doing this at Mission Bay?

AM: The approach we took there was to have specific types of garden areas that are designed for different patients, and then separate ones for clinical staff to come out and basically decompress. There was also a double advantage of doing this because we were able to use our green space to mitigate storm-water runoff.

TC: What effect can good design have on patients?

AM: Hospitals have a lot of noisy medical equipment, but if we make the space too quiet, you run the risk of hearing every footstep up and down the corridors—so it’s a delicate balance. We’re seeing new kinds of hospitals—like Kaiser Permanente San Diego—which will be the first to be fully LED lit, where lights in patient rooms change from a reddish hue in the morning to a bluish one at midday, and then back down again. research studies have shown good design can provide an environment that reduces stress and can eventually lead to faster patient recovery. At the same time, this can lead to less fatigue in the clinical staff, so it can all have a cumulative effect.

TC: Doctors and nurses are a major part of the hospital setting. How do you also consider their needs?

AM: In most hospital design, clinical staff tend to be ignored. If you look at a typical patient-floor layout, nurses at nursing stations literally may not see the light of day unless they go into patient rooms. We, along with the architects that we work with, are trying to think of ways of introducing natural light at the ends of corridors and in other strategic places.The difficult part of doing this is that you will probably make your exterior or your floor plate bigger, which runs you into the issue of finding the financial benefit to make up for the additional cost. But, it’s very hard to put an actual number on what your nurses—one of your most critical resources—need to function better. 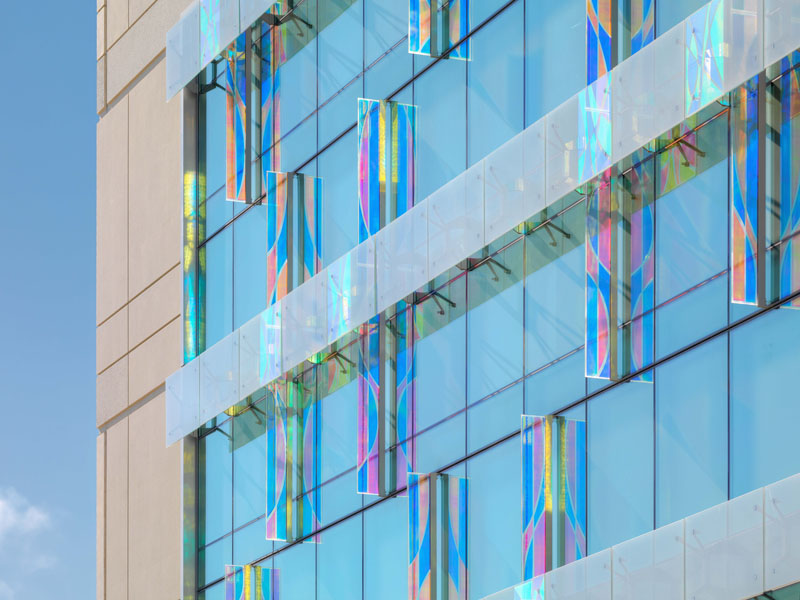 To minimize solar gains, the windows were outfitted with high-performance glazing and external shades. other innovations in the hospital include autonomous robotic couriers and virtual-reality MRIs.

TC: In addition to issues such as daylight, breathability is a problem for many hospitals. How do you design a space to allow fresh air to circulate?

AM: We need different approaches for different climates. Particularly in high-humidity areas, we have to be very careful about preventing mold growth. Hospitals in the United Kingdom, and a lot of hospitals in Europe, ventilate patient rooms with either louvers or operable windows, but here in the United States we have to be air-conditioned.There are a few places, such as the Laguna Honda Hospital in San Francisco, where we do have some operable windows in patient areas.

AM: I think, five to ten years out, we’re going to see facilities using only LEDs on the lighting side. Also, I think we’re going to see health-care providers making much more use of data. A lot of people are banding around big data, but not many organizations are really effectively mining it to make better decisions about how they use health-care resources. I also think completing a hospital on budget and on time, through an integrated design and construction team, is a great trend that we’re going to see more of. From an engineering standpoint, flexibility is increasing. It’s always been an issue because medical technology changes very rapidly, so when you think about the length of time it takes to design, construct, and open a major hospital, you may have very different medical equipment requirements. Flexibility is something we need to build into our design.