Artists look at how 3D printing can be used to create abstracted works of fine art.

One of this month’s fabricating duos, Jason Pilarski and Steven Joyner of Machine Histories, often works with fine artists to figure out how to bring their larger-than-life pieces into the world.  Their 2009 effort for artist David Schafer, Separated United Forms, was part of a 1% for the Arts commission for the Huntington Hospital in Pasadena and encapsulates the intricacies of their tech-meets-manual approach.  Schafer, an NEA-award recipient whose work has been shown at PS1 and De Vleeshal in the Netherlands, talks about the pair of sculptures.

Jade Chang: You and Jason taught a class together at Art Center?

David Schafer: Yes, it was a moment at Art Center where there was an opportunity to develop a new kind of interdisciplinary curriculum.  I was frustrated with Art Center because there was a Fine Art program, but no way to allow them to have access to the digital side of things.  Jason and I taught digital practices and sculpture. It was not market driven, instead, it was more or less taught from an art perspective. Students could bring in own conceptual ideas, they wouldn’t have to design a blender or anything, and they’d learn rapid prototyping machines and 3D modeling.  We had fine art-style crits—the kind that go on and on—to discuss their work. 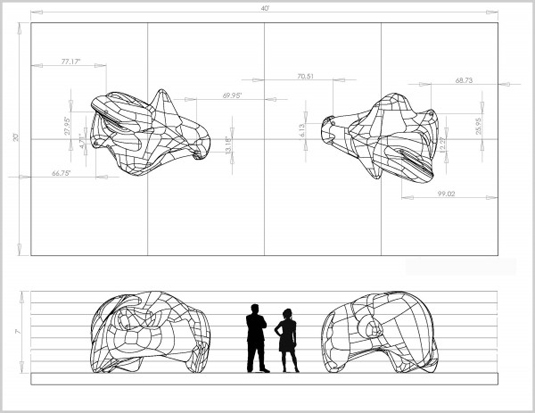 JC: And how did you meet Steven, the other half of Machine Histories?

DS: The three of us came together in that class.  Steve was really brilliant.  They just had lots of energy, and the class became a platform for these things to evolve and develop.  It was great to have fine arts students in the class with transportation design students, product design, to discuss everything from product theory to appropriation. Steve is definitely the one that’s the most organized.  He does go to great lengths to make the greatest looking racking to hold something—he gets as excited about the case as the thing in it. 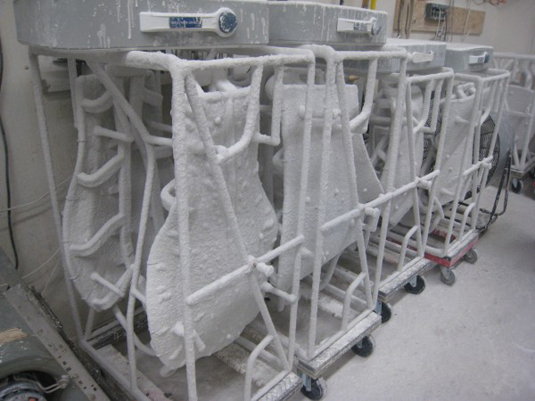 JC: What was it about the two of them that made you want to work together on Separated United Forms?

DS: They were both instrumental. It involved the handheld scanning of a Henry Moore sculpture at the Norton Simon Museum in Pasadena, using a 3D body-scanning thing that’s also used in hospitals. And it involved a lot of weird politics.  There were the ethics with the Henry Moore people, and all sorts of logistics.

Also, they’re both sort of punk in how they think, there’s something raw and direct about it. They allow the machines to do things that other people might not actually allow. You’ve heard of glitch culture? It’s big in music right now, sampling.  That can be really important—to embrace the glitch within that digital flow.

JC: How did the process actually go?

DS: I had these ideas on how I wanted to break it apart and sample it and superimpose parts of it. The conversation was, ‘Let’s try this. Let’s rotate this;’ just a lot of trying different things sitting side-by-side looking at a computer screen. Jason is so quick and fluid in the way that he can model [digitally] and the way he thinks allowed me to be incredibly free. I knew the forms needed to be sampled and superimposed but wasn’t sure how. The more that we embraced the digital workflow the more complex and interesting it got. We split the original sculpture digitally, and then rotated the two parts and reflected them back at each other so that there was a tension between the forms. That’s something you wouldn’t be able to do without the technology.

DS: Absolutely.  Scanning a marble sculpture from the 60s, and then having it cast in bronze at the end, that was interesting to me. We’re in that weird schism right now between analog and digital. 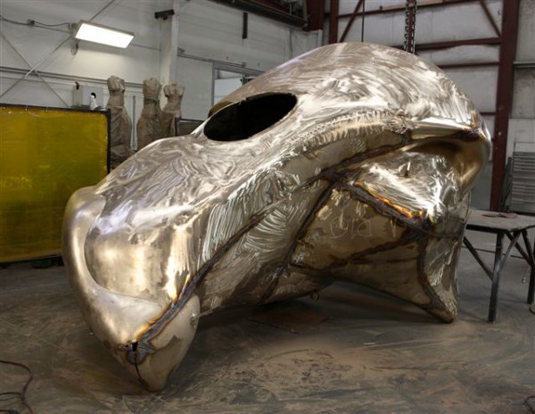 Here, we used state-of-the art imaging and modeling, and then went into a traditional foundry in Walla Walla [Washington] where they took the digital files and built the molds out of plaster-impregnated foam. We were able to bypass building the whole sculpture out of clay step, like any sculpture in the 20th century is made. I think it was fun for Jason and Steve to see something come back that was 20,000 pounds of bronze, when they were so used to computing in this scaleless, airless space.

JC: How long do you think we’ll stay in this in-between space?

DS: One technique doesn’t necessarily replace another. We’d model it, then draw it, then scan it, then build it in wood. You go back and forth. In a way it’s like working with sound for me.  It’s improvisational, and you still sort of need the artifact. It’s the combination of all the technologies that makes it interesting. How can you carve a wooden sculpture, and still have that be relevant?  How can you make a cast bronze sculpture and put it in front of a hospital and make it relevant?

JC: And then, how do you make a sculptor from the ‘60s relevant?  Why Henry Moore?

DS: I found out that Henry Moore had coined the phrase “vitalism in art”, and I really embraced the idea of the life force in an object.  So the sculpture would represent an inner force growing outwards, it would evoke an idea of biomorphic life, and I thought of that in relation to the hospital.  It turned out that the one I was interested in was called Reclining Form, which seemed perfect for a hospital—most of his abstracts are based on the female reclining nude.

JC: With this kind of work, is it hard to enjoy without the backstory?

DS: Probably.  The plaque reveals the backstory, but I did think about that, and I wish that you could involve the viewer in the whole process. I remember… we’re down in the basement of the Norton Simon and we’re scanning it, and it felt like that would reactivate the vital life force, that it would grow in the computer and come alive! Everyone was in masks and gloves, because you have to be so careful with those pieces, and we have this high-tech medical grade scanner, and it just felt like something out of science fiction. 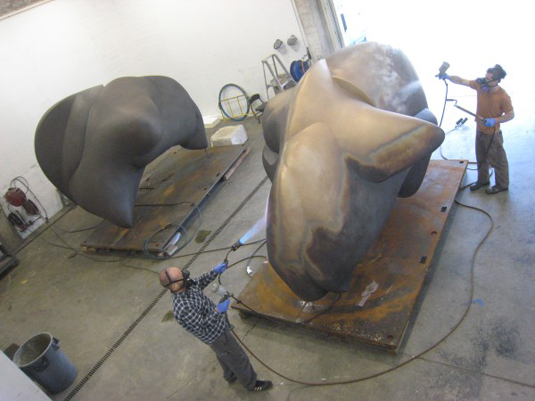 JC: Alien growths outside of a hospital—that can be scary!

DS: Abstraction can be threatening. Those pieces are about re-colonizing the body, and essentially that’s what happens in the hospital framework. I thought I could be really beautiful and poetic, but it can be threatening, like this weird growth. I like how it can provoke reactions. 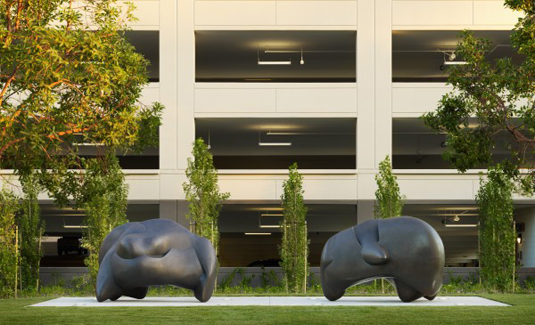 Jade Chang is a writer and editor living in Los Angeles. She was the West Coast Editor of Metropolis Magazine and the 2007 recipient of the AIGA/Winterhouse Design Writing award.