Montreal’s Moment Factory, a new media and entertainment studio, is best known for creating and producing multimedia environments that combine video, lighting, architecture, sound, and special effects. You may have seen their work at Cirque du Soleil, Madonna’s 2012 Superbowl Half Time Show, Disney’s E3 booth, or Jay Z’s Carnegie Hall debut. Perhaps you were there when they lit up the facade of the Sagrada Familia or Montreal’s Quartier des Spectacles district. Or maybe you saw that they were included in Apple’s recently launched 30th anniversary timeline.

Moment Factory was the main content provider for the interior concept and media features in the newly opened Bradley International Terminal at LAX, designed by Fentress Architects. It was a large collaboration consisting of several partners, including Mike Rubin with MRA International, Marcela Sardi of Sardi Design, Smart Monkey, Digital Kitchen, and Electrosonic with installation by Daktronics and Planar.

Reaction from passengers and the airport management at LAX has been, to put it most effectively, “WOW!” So was mine. That’s why I asked them to present the project at Dynamic Digital Environments-Master Class on Feb 11, at the Digital Signage Expo in Las Vegas. I produce this annual pre-conference education workshop and roundtable with architects and designers in mind. To preview our master class, I asked Moment Factory’s Melissa Weigel, senior multimedia director on Bradley International Terminal at LAX a few questions about the project. 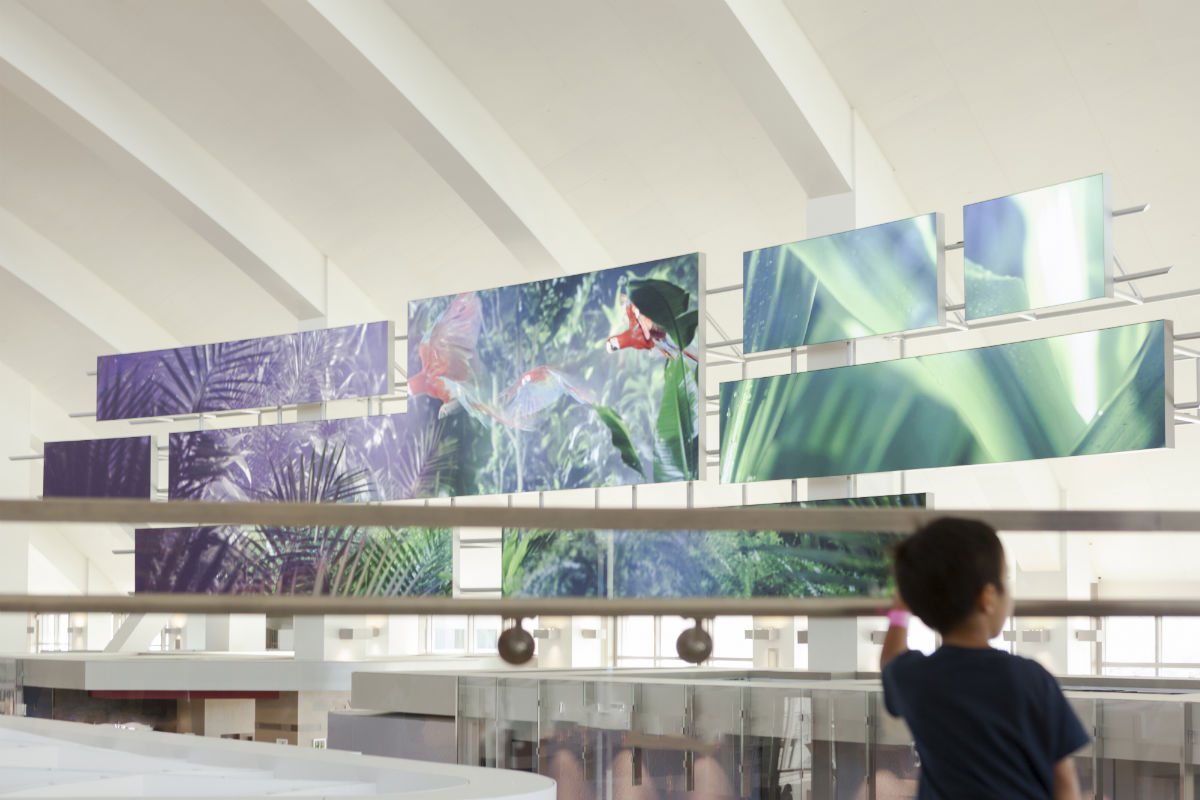 Digital screens in the atrium space at the LAX Bradley International Terminal.

Leslie Gallery-Dilworth:  At the LAX Bradley International Terminal, the media features are an integral part of the interior, and enhance, rather than detract from the space. I’m convinced that these features enhance the passenger experience of the space. The media work in harmony with the architecture. What were the biggest challenges in accomplishing in this?

Melissa Weigel: There is a big difference between shaping a space through the architecture, and shaping the experience of the space through cinematography. Think about the typical experience with cinematography, when a viewer is sitting still in a theater watching the fixed screen. Now think about a volume in which there are many activities, the light is not fixed, and the audience is coming and going, or just sitting for a period of time. In terms of content, movement, and color, each individual media feature had to work independently, but then they had to work together as an ensemble. The content had to work for a viewer just glancing at the screen, or for one spending more time there. Then there is the consideration of the scale of this space, which is very grand. How can space be narrated through multimedia? Marcela Sardi and Mike Rubin contributed to the decisions of where and how to place these features, and what form these features would take. We were the primary media content developers. 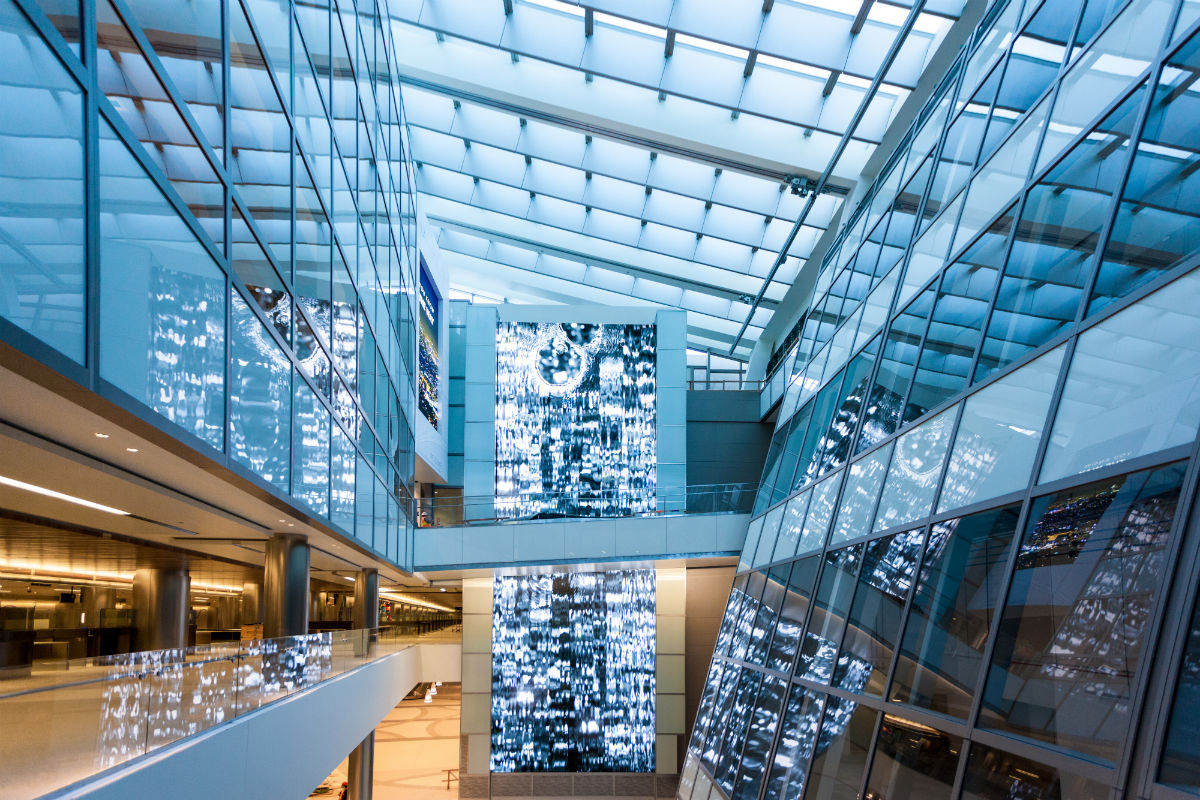 At LAX, it was important to create “a positive experience after the stress of the departure experience,” says Melissa Weigel.

LGD: How do the media features influence the experience of the passenger, and of the space as well?

MW: People are often anxious when they are in the airport terminal. They have either just gone through the hassle of security, or they have just arrived from a long flight. Creating a positive experience after the stress of the departure experience was important. What can we do through the media features to positively affect the mood? What kinds of stories do we want to tell?

We wanted the content to have something to do with the flavor Los Angeles. We considered the length of each scene, the repeats, and the atmosphere created by the content. The color palette of the images was another important consideration. Then there is the element of time and space. The natural light changes, the movement of people in the space changes throughout the day and the night. And the mood of the space changes, sometimes there is a rush of people arriving, and then there may be a lull. Another important issue to consider was how does both the space and the content live or evolve over time? 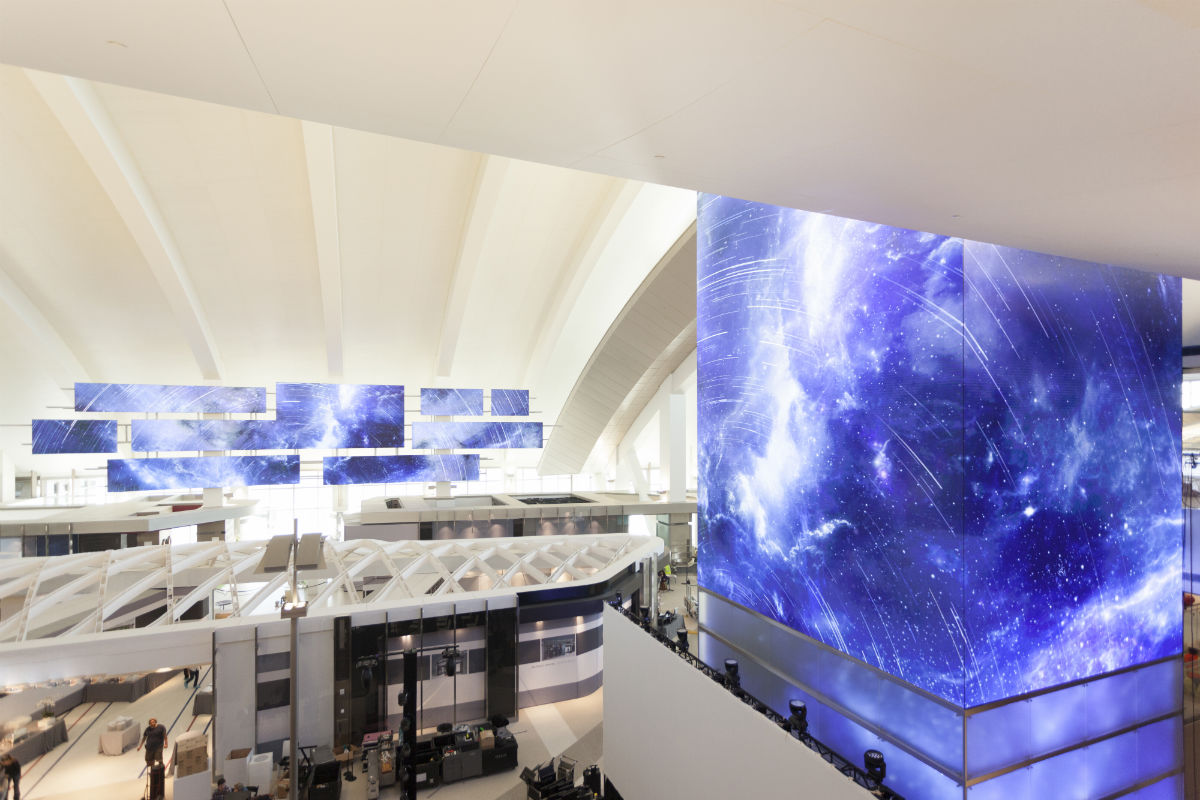 LGD: With a large team of many disciplines, in so many locations, and working with a complex public agency, how was this managed?

MW: LAX is challenging. There is security; it is a public entity; and we had a large team. But this project simply could not have been possible without generous collaboration. We had regularly scheduled group meetings of course, and frequently met at our offices in Montreal. Once the locations and concepts were developed, we built maquettes of the interior of the terminal to test ideas. Obviously we could not test the ideas on a full-sized model! There were many details in everyone’s camp. Constantly going back and forth with the technology consultants, and exploring what was possible and what would be required.

It was one year from beginning involvement to installation.

LGD: This is a very creative team. How does the technology contribute to or limit your creativity?

MW: It is very important to have this back and forth with the technical experts. Although Moment Factory has an experienced staff that includes many disciplines, we relied on Smart Monkeys and Daktronics and Planar to provide that expertise in many of the technical aspects. For instance some of the considerations were viewing angles. The installations would be viewed from many angles, and from a variety of distances, not just directly in front of the screens, and not just from one level. In addition to meshing the creative ideas with the technologies, there was also the challenge of the installation itself, within the airport. Huge attention was paid to every detail.

LGD: Mention digital signage, and some people envision a clutter of menu boards and billboards. Many architects, designers, urban planners and the general public think these technologies pollute our surroundings, rather than enhance our surroundings, or improve communication. What is your attitude toward so much visual stuff?

MW: I think a lot can be done in a positive way. This technology goes beyond menu boards, and billboards. We have a definite responsibility to contribute positively to our surroundings. When it is done well, it can be an offering to enhance the public space. Look at the Quartier des Spectacle in Montreal. The Luminous Pathway contributes greatly to the quality of public interaction, as well as bringing the district to life. This is a new language. It transcends the spoken language. It can be a public space enhancement. We have to break the format of the rectangular screen, and make this media technology more of an integral part of the surroundings and of the activities. We are very conscious of visual overload, and of the impact of fast images. Big billboards, now people just shut them out.

Rather than forcing these images–these dynamic surfaces–in their face, we think giving people something of quality is far more effective. We think of it as a gift, an offering. Our intention is to create a special moment that they can remember.

Leslie Gallery-Dilworth, FAIA, is an architect and urban designer. For 12 years she was the CEO of the Society for Environmental Graphic Design, prior to that she was the founding director of Philadelphia’s Foundation for Architecture. She has received three design fellowships from the NEA and was awarded their USA mid-career fellowship. You can find Leslie at [email protected]