The Lord of Thames Bank talks about Niemeyer and the architect’s influence on the new Norton Museum of Art.

Oscar Niemeyer and Lord Norman Foster in 2011. “He was in wonderful spirits—charming and, notwithstanding his 104 years, his youthful energy and creativity were inspirational.”

Last December, in the midst of a hectic schedule of events that have come to define ArtBasel/DesignMiami, I found myself attending a luncheon presentation of the plans for the Norton Museum of Art in Palm Beach, by Foster + Partners. While chatting with Lord Foster, I mentioned my Brazilian background and quickly the conversation turned to Oscar Niemeyer. Foster mentioned the talk he and Niemeyer had shortly before the Brazilian’s passing (coincidentally that same week in December marked the first anniversary of Niemeyer’s death). Curious to know more about the meeting and their chat, I asked Foster about that legendary encounter and some of the guiding ideas behind his design for the Norton.

Paul Clemence:  How did the meeting with Oscar Niemeyer happen? What motivated the encounter?

Norman Foster: It came out of a conversation I had with Hans Ulrich Obrist in January 2011, during an annual salon that my wife Elena curates with him in Switzerland. I travelled to Brazil later that year and met Oscar in Rio on 21 May. There were so many reasons for the meeting, but Hans had a particular interest in bringing us together to discuss our experiences as designers of cities. In Oscar’s case, it was, of course, Brasilia; in mine, it was our work in Europe and the Far East, notably Masdar in Abu Dhabi.

PC: How did you find Niemeyer? What were his spirits like at that advanced stage of his life?

NF: He was in wonderful spirits—charming and, notwithstanding his 104 years, his youthful energy and creativity were inspirational. His energy and good humor were boundless. We had an interesting discussion about architecture as invention and its capacity to surprise. And we talked also about life and the cosmos—as he said, “we are on board a fantastic ship!”  In the 1950s, I was inspired by his work which in the context of austerity in Britain was colorful, exuberant, and glamorous. This was before I started my architectural studies.

PC: As someone who was an early inspiration of yours, how did it feel to meet Niemeyer in person?

NF: The experience of meeting him was very special. Few of us get to meet our heroes and I am grateful to have had the chance to spend time with him whilst he was alive. I was touched by his warmth, his great passion for life and architecture. 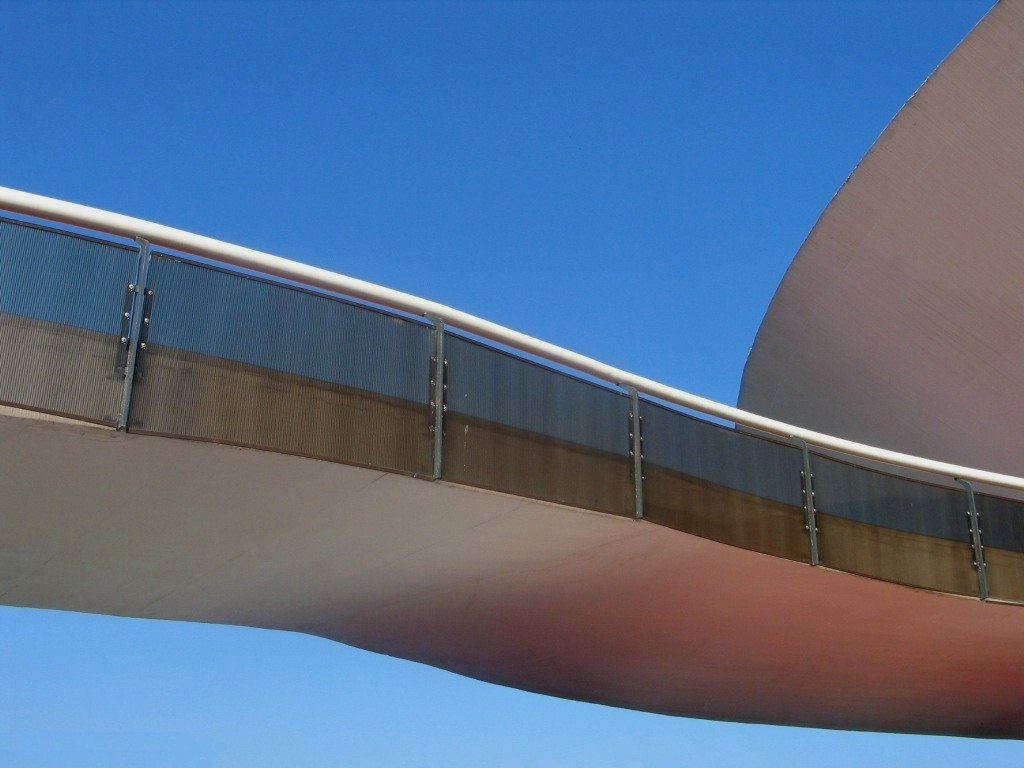 PC: What particular area of Niemeyer’s work most appeals to you? Do you find any common ground between your work and his?

NF: I am impressed by his ability to summon such a varied vocabulary of forms and structure them into brilliant architectural compositions. For architects schooled in the mainstream Modern Movement, he inverted the familiar dictum that ‘form follows function,” he demonstrated instead that, “When a form creates beauty it becomes functional and therefore fundamental in architecture.”

As Hans Ulrich Obrist observed, there are some parallels between Niemeyer’s Brasilia and Masdar City in Abu Dhabi—in the sense that they are both designed from scratch. However, Brasilia was designed at a time when the automobile was still considered to be the future of society. By contrast, Masdar is relatively car free and learns from ancient planning principles that predate the age of cheap energy and the dominance of the automobile. Moreover, it is a bold experiment to demonstrate that a zero-waste, zero-carbon community can be created and totally driven by solar power.

NF: I used to pore over Niemeyer’s work in my early twenties—the tapering, bone-like concrete columns of the Alvorada Palace; the formal dynamism and structural economy of Brasilia’s cathedral. The city of Brasilia is not simply designed, it is choreographed; each of its fluidly-composed pieces seems to stand, like a dancer on points, frozen in a moment of absolute balance. What I most enjoy in his work is that even the individual building is very much about the public promenade, the public dimension. I saw his contemporary Art Museum at Niteroi for the first time during our visit in 2011—it was exhilarating. Standing on its rocky promontory like some exotic plant form, it shatters convention by juxtaposing art with a panoramic view of Rio harbor. It is as if he had dashed the conventional gallery box on the rocks below, and challenged us to view art and nature as equals. I have walked the Museum’s ramps. They are almost like a dance in space, inviting you to see the building from many different viewpoints before you actually enter. I found it absolutely magic.

PC: Both you and Niemeyer have had an amazing path in your careers. Architecture being such a hard profession, could you comment on that and also on Niemeyer’s career?

NF: It is certainly true to say that architecture is a demanding profession and every project is fraught with obstacles along the way. Niemeyer was able to be true to his values as an architect over a uniquely long span of a professional career, maintaining his creativity and spirit to the very end. Perhaps the unifying element in your question is a shared passion and total devotion to architecture with a belief in its ability to lift the spirit. 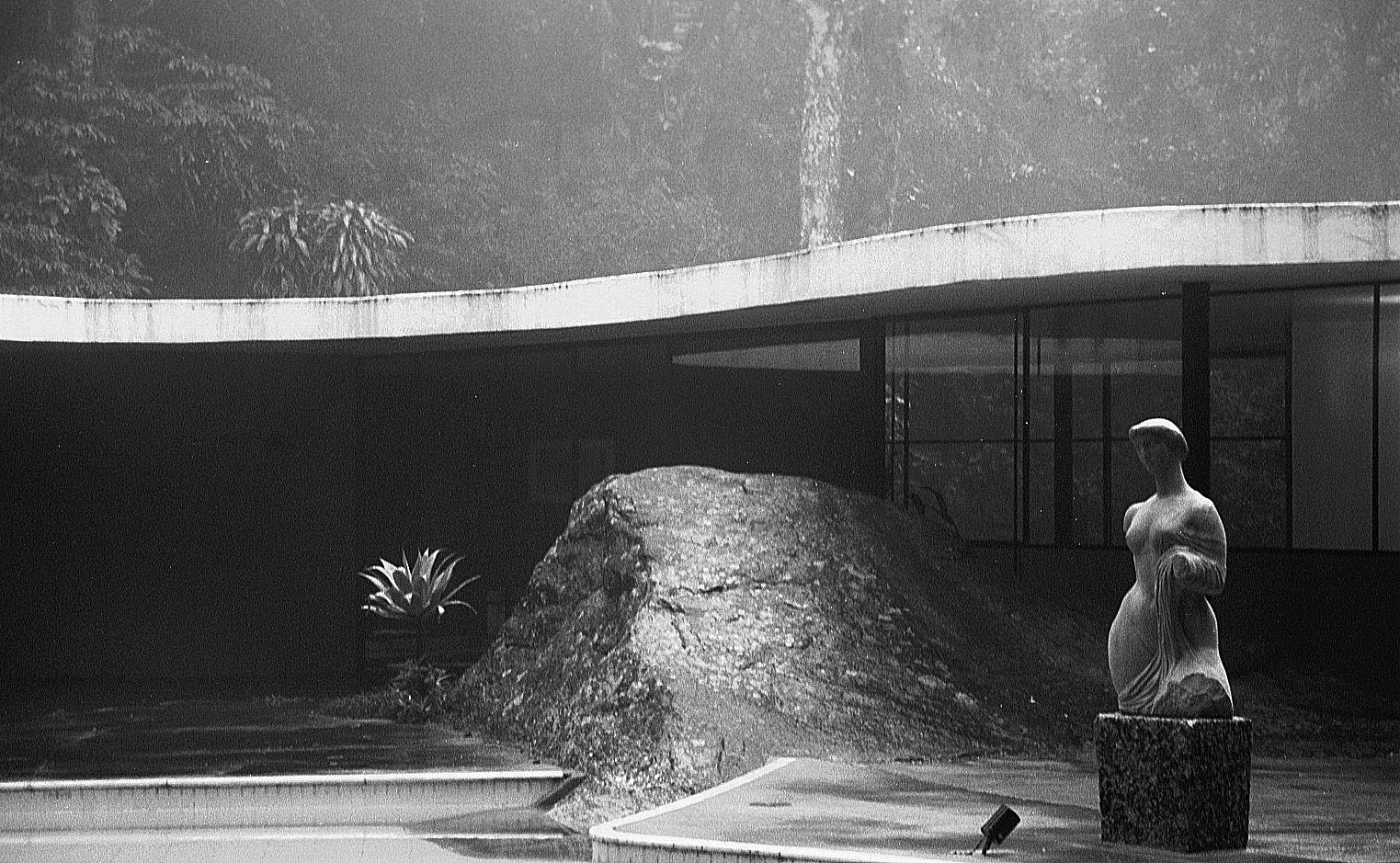 Casa das Canoas, by Niemeyer, with bolder at center. The house’s design, like much of the architect’s work, combines aspects of vegetation, landscape, and climate in ways that inspired Foster and many more. 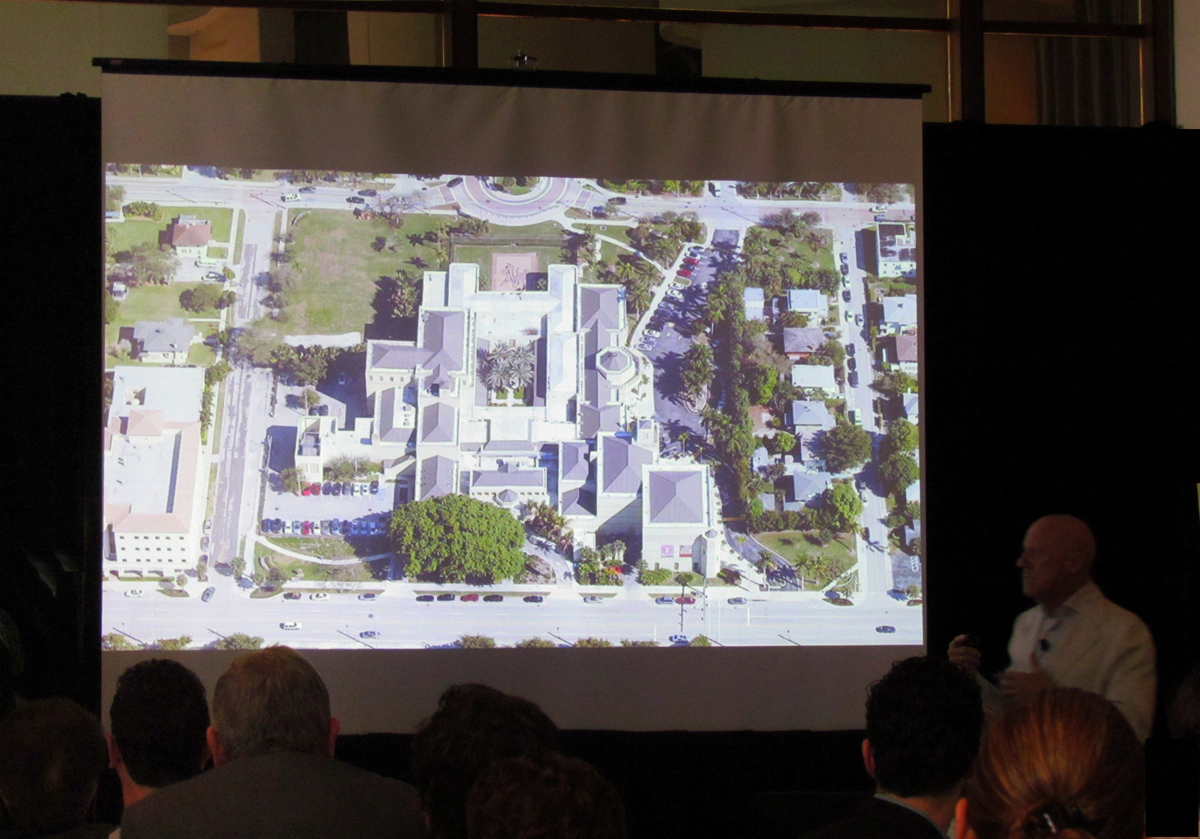 PC:  At the Norton project you will be dealing with a similar climate that Niemeyer dealt with most of his career, and also in a place where nature has a very strong presence. Maybe comment on that, any lessons from Niemeyer on tackling this context?

NF: The common denominator is perhaps less the climate alone and more the combination of the vegetation, landscape, and climate. These came together in my response to the social generators of the Norton Museum. It is easy to forget that the weather in Florida is so delightful, with great potential for outdoor terraces and dining. Much of the Norton site has been given over to tarmac and car parking. So by removing roads and bringing back landscape as a setting for sculpture and events, we have returned the museum to a historic tradition of marrying architecture and landscape. The link here to Niemeyer is not a conscious one. However, during our conversation, Oscar likened Brasilia’s green spaces to Brazil’s wonderfully varied landscape of rivers, forests, and mountains. In a sense, the capital can be thought of as a microcosm of the country as a whole – as much as it is a daring vision for its future.

Our approach to design is similarly guided by a unique sense of place—by the national and the local context; by research and analysis of the climate, culture, and the needs of many different users. The potential to harness nature to provide foliage and shelter, to ventilate or bring light into a building, is equally profound—by working in harmony with the environment, design can help to protect and conserve energy and natural resources. 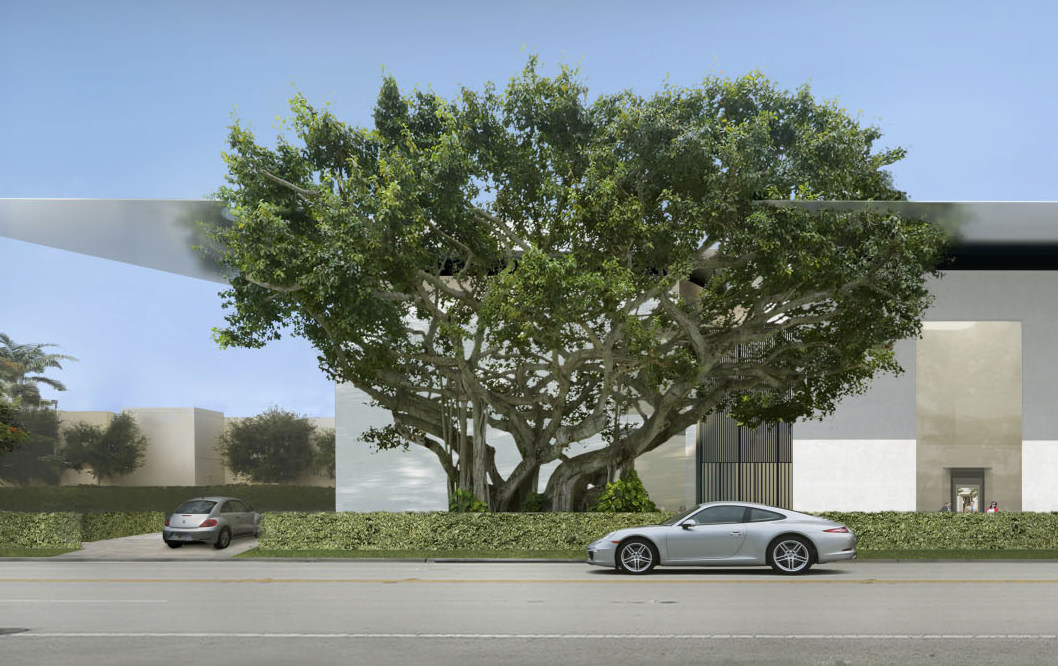 Rendering of the Norton Museum of Art, with preserved ficus tree.

PC: On that note, could you talk about preserving that tree by the South Dixie Highway façade and its importance for the project?

NF: The tree is a mature ficus, a native species to the tropics, which has been preserved as part of the new entrance plaza. It is like a noble sculpture with a long lifespan ahead. The metallic roof canopy has been cut away and curves around its branches, and the windows in the new pavilions have been positioned to frame views of the tree, thus helping to connect the interior with the landscape beyond – always providing a point of reference. The preservation of the tree is part of a wider landscaping concept for the grounds and sculpture gardens – throughout, we are incorporating native trees to provide shade with flowers and plants that are indigenous to Florida. 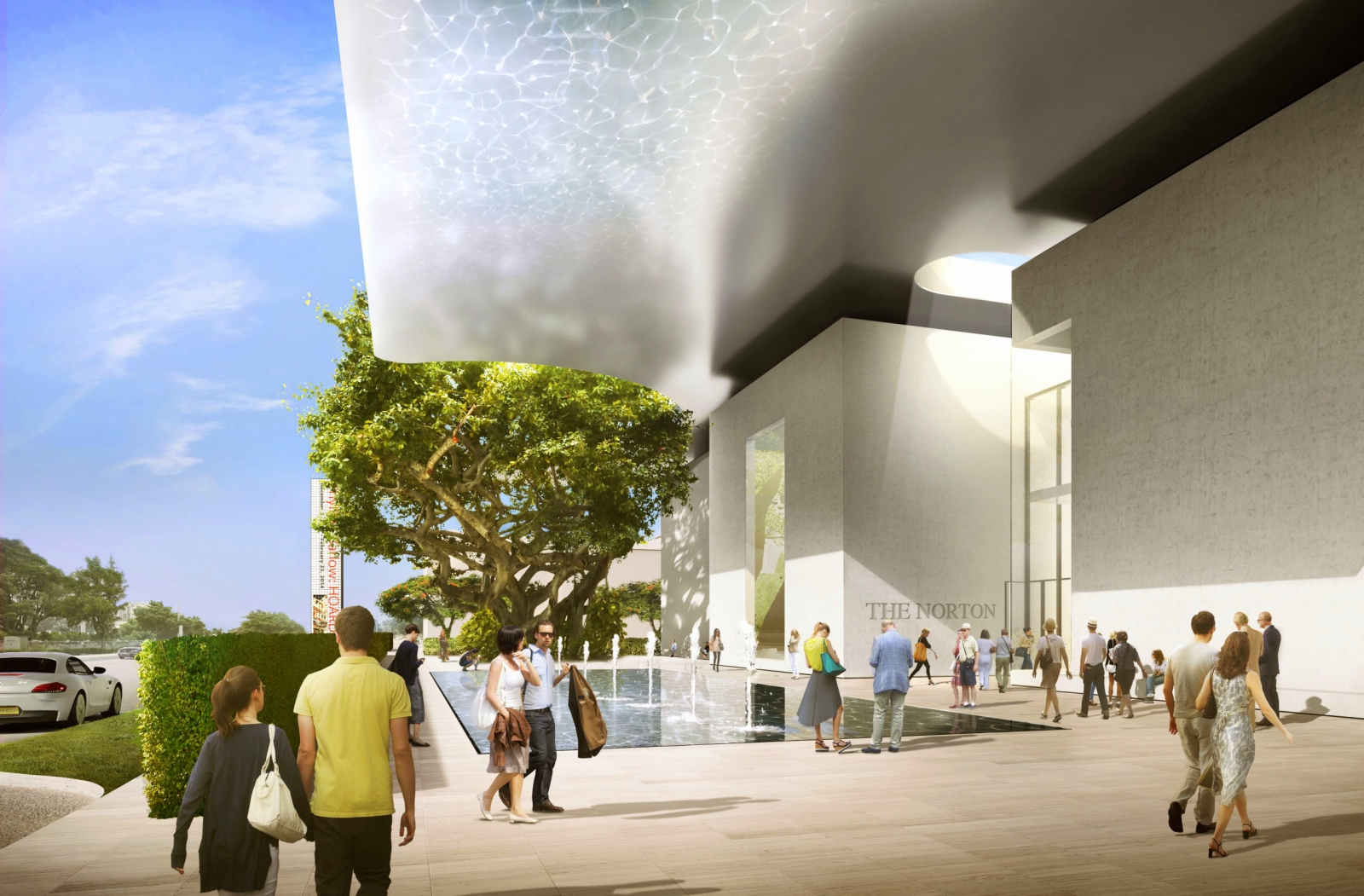 Rendering depicting the main approach to the Norton Museum of Art.

PC: The metallic roof canopy has an important role in the design; could you expand more on its relevance?

NF: The canopy visually unifies the three new pavilions and main entrance; it also helps to create the new street frontage and identity on South Dixie Highway. The roof canopy extends over the new entrance plaza with its linear pools, and it provides shelter and shade from the sun. As well as protection from the weather, the structure is designed to withstand extreme forces. It is gently tapered to visually create a very slim profile, while providing stability to deflect hurricane winds. The under-surface of the canopy is important. It will not be shiny or mirror-like but will be reflective enough to capture the sun’s rays as they bounce off the water below. This will create beautiful, abstract patterns that will dance by day and make a different kind of magic at night.

The canopy swirl around the majestic ficus tree reminds me of how at Niemeyer’s Casa das Canoas (Canoas House) the design is anchored around the boulder that erupts from the ground. In both cases nature invites you in and grounds the man made, sending a strong message of the desire for balance between the two. It shows that although of different times, approaches and mindsets, Foster’s and Niemeyer’s architecture both use the technology available to them (whether it’s a new cutting-edge metal structure or pushing concrete to its limit) to create a building that responds to contextual challenges while celebrating the human element. As Foster said so eloquently when asked for after-thoughts on that meeting: “Our talk affirmed shared values rather than revelations. The most fundamental of these is the importance of the social dimension, and Oscar’s reminder that ‘architecture is important, but life is more important than architecture.’ ”

The conversation between Oscar Niemeyer and Norman Foster, with Hans Ulrich Obrist present, was published by IvoryPress as part of their Architecture Series.