Q&A: P.D. Smith on the Development of Cities Around the World

Reading Peter D. Smith’s latest volume, City: A Guidebook for the Urban Age, is akin to strolling through a contemporary city, wherein broad impressions are punctuated by specific and visceral encounters. The elements that make and shape cities and urban experiences, from the physical contours to the social interaction that takes place within their borders, […]

Reading Peter D. Smith’s latest volume, City: A Guidebook for the Urban Age, is akin to strolling through a contemporary city, wherein broad impressions are punctuated by specific and visceral encounters. The elements that make and shape cities and urban experiences, from the physical contours to the social interaction that takes place within their borders, are all explored in broad chapters such as “Where to Stay” and “Getting Around”. Short narratives highlight these well-researched surveys, topics that deserve their own explication on different elements of the city that we think we understand, but as Smith quickly reveals, we don’t. In the chapter on “Where to Stay”, we are given a brief history of the meaning of wharves then and now in cities such as London, San Francisco, and New York in “On the Waterfront.”  The chapter “Getting Around” is separated into subtopics like “Walking”, in which the author takes us on a short tour of “Mumbai’s Skywalks”. And what would an essay on “Traffic” be without looking at the history of the ever-present “Parking Meter”? Throughout the book Smith references London and New York as points to depart from and return to. It is a book with a large intellectual scope. And clearly, there is much more to say. With this in mind, Guy Horton and I decided to ask Smith about his thoughts on issues in a time when developing nations are experiencing and experimenting with different development models, and our industrialized urban centers are seeking strategies for renewal and reinvention. We also asked his thoughts on the trajectory of contemporary cities in other parts of the world, including some of the BRIC economies, as well as nations in conflict. This is what he had to say.

Sherin Wing:  Let’s begin with contemporary urban spaces in industrialized nations, what elements do you think are at the forefront of our experiences of city-spaces?

Peter D. Smith: If I think of the cities of the industrialized world and how their spaces influence our experience of them, then I think first of how you get around those cities, of the transport infrastructure: the subways and underground systems especially. You can’t say you really know London until you’ve travelled beneath it. The Tube network is like a vast organism penetrating the substrata beneath the city. The buying and selling of goods is one of the most ancient aspects of urban life. The Egyptian hieroglyph for a town was a circle with a cross in it – the circle representing defensive walls and the cross the meeting of routes at a marketplace. Today, shopping remains one of the big attractions of the city, even in the age of the Internet, like the Tsukiji fish market in Tokyo, the largest such market in the world. This is a remarkable, dynamic urban space with its own history and traditions. That’s a very different experience from the sterile streets and shops of Ginza. And a recent poll showed that Londoners placed the capital’s shops top of the list of what they liked most about their city. Of course, the streets and squares are also important, the open spaces around the city’s structures. There may be broad avenues in some districts – probably choked with cars and trucks – and, in other areas, smaller streets, built on a more human scale where there are less people and where the experience of the city is more intimate. And we shouldn’t forget urban parks and green spaces – some of them quite small, where the sound of the passing traffic remains a constant reminder of the big city beyond the trees. Others are so large that the city’s towers vanish into the hazy distance and you could be in the countryside. All these spaces contribute to our experience of the city. 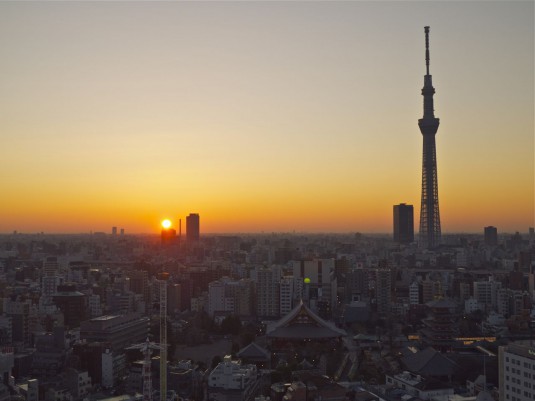 SW:  Are there certain elements of cities you think require attention, in terms of both neglect and revitalization that might significantly improve our lives?

PDS: The increasing use of surveillance technologies and private security guards in public urban spaces is troubling, although many of these spaces are not public at all now, but owned by private companies. Stadtluft macht frei – city air sets you free – was inscribed above many medieval city gates in Germany. But in parts of some cities nowadays you feel like you are entering a military camp or even a prison. Anonymity and the freedom to come and go as you please, we must not lose these rights in the high-tech, smart cities of the future, when everything and everybody can be tracked constantly and covertly by cameras and cell-phone signals. Crime and terrorism are important issues affecting urban life, but we need to take care that our response to these threats does not undermine the freedoms that are at the heart of city life. I also think that the car has caused untold harm to cities and city life. Hopefully, the sustainable cities of the future will have efficient and cheap public transport, walkable districts, and will encourage cycling, as in Copenhagen or Tokyo. Cars bring pollution into the city and busy roads destroy neighborhoods. If you drive a car in a city you are also isolated from other city dwellers.

SW:  You identify categories such as religion, walls, writing, getting around, and parks as important features in the urban spaces of industrialized nations. How about those cities that are currently undergoing conflict?

PDS: Conflict within cities (riots, civil war) and between cities is nothing new. The rise of urban civilization in Mesopotamia some five thousand years ago created large wealthy communities. They needed to protect themselves. In the earliest cities we see the first standing armies, with professional soldiers. War between the city states became an annual feature of life in Sumeria, wars over resources – water and food. In the future, too, as the world faces a changing climate as a result of global warming, there will be wars over resources. But the cities of the future will not have just 50,000 hungry, thirsty inhabitants, but 40 million or more. Walls – an ancient response of cities to conflict – are still used defensively and as structures of control. Think of the Israeli West Bank barrier, some 700 km long. Or before that the Berlin Wall, 165 km long. Walls are used within cities, too, as a response to internal conflict. Mike Davis highlighted the retreat of wealthy Angelenos into gated communities, describing this phenomenon as “Fortress LA”. This is now a common feature of urban life around the world. Such walled private citadels are the modern equivalent of medieval Italian tower houses. But they solidify divisions in society revealing that we live in fragmented, unequal communities. They reflect the balkanization of the city, a worrying trend.

SW:  What are the dominant elements to BRIC economies’ cities?

PDS: In China, for example, the rate of urbanization is unprecedented. Between 1880 and 1930, New York became a vertical city, the city that defined the world’s idea of a modern metropolis. Shanghai has concentrated that growth into a mere two decades. In 1980, there were 121 buildings over eight storeys. By 2005, there were more than 10,000. It now has four thousand buildings in excess of twenty storeys. It also has three supertall towers, including the Jin Mao (1,380 feet), the Shanghai World Financial Center (1,614 feet), and the Shanghai Tower (2,073 feet). As the migration of people from rural areas continues, high-rise, densely populated cities are being constructed across China. Chinese cities are also building subways. Shanghai’s is now the longest in the world and even medium-sized cities, like Wuhan (750 miles to the west), are building new subways. But bicycles have been discarded for cars, just as European cities like London and Copenhagen are rediscovering the joys of cycling and car-free city centers. What are the dominant elements in such cities? Skyscrapers and high-rise towers, subways, roads and traffic congestion, large stores – these are all topics with a fascinating urban history. Indeed, it was the continuity of urban life across space and time that struck me whilst researching my book. For instance, at the time of Julius Caesar, ancient Rome suffered from crippling traffic jams. So much so that carts were banned during the daytime. Many urban problems are not new at all.

SW:  Do you think that any city or combination of cities provides a viable model for regions that are experiencing both initial and revitalizing growth?

PDS: One aspect in the design of cities is the need to make them sustainable, to reduce significantly their ecological footprint. Global warming and the increasing rate of urbanization have made this an urgent goal for cities everywhere. This has resulted in some revolutionary designs for new cities, such as at Tianjin in China or Masdar City, near Abu Dhabi. These cities aim to generate their own energy, to recycle their water, and to reduce their inhabitants’ reliance on private cars. Older cities are also trying to make themselves more sustainable. For instance, Freiburg im Breisgau, in south-west Germany, now has Europe’s largest car-free urban zone – Vauban. 70% of Vauban’s families do not own a car. Cities around the world need to start following these examples if we are to avoid the fate of the first cities in Sumeria, which were unable to cope with a changing climate and environment. All that remains of these cities are mounds of dust in the desert.

Created with flickr slideshow. Sherin Wing writes on social issues as well as topics in architecture, urbanism, and design. She is a frequent contributor to ArchDaily, Architect Magazine and other publications. She is also co-author of The Real Architect’s Handbook. She received her PhD from UCLA. Follow Sherin on Twitter at @xiaying Keep an eye out for Metropolis’ October 2012 issue featuring the future of cities. Flickr slideshow added on 9/20/2012. Tokyo caption amended on 9/25/2012.