President of Philadelphia’s Center City District talks about his initiatives for the area.

In preparation for a panel I’ll be moderating on February 26, at the Digital Signage Expo (February 26-28) coming to the Las Vegas Convention Center, I decided to learn more about my panelists, their subjects, and the potential breakthroughs in media technologies. “New Design Directions: Dynamic Digital Environments,” organized by the irrepressible Leslie Gallery-Dilworth, FAIA, will conclude with a conversation between the day’s presenters and me. Here I start on the large scale, the city, and how the urban environment can benefit from the newest technologies, be it through offering new experiences or new development opportunities, all of which respect the glorious building stock that distinguishes many of our cities.  Philadelphia, the cradle of American democracy certainly fits into our list of treasured cities. So I start my Q&A series by asking Paul R. Levy, the president and CEO of the Center City District to talk about a recent kinetic light installation in that historic area, and his hopes for what it will bring to his city. 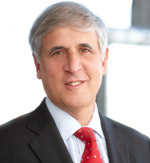 Paul Levy, President and CEO of the Center City District

Susan S. Szenasy: I understand that Philadelphia’s Center City District (Market Street East at the Gallery), which you oversee, has been designated as a large scale digital signage area. What will this initiative do for the area (talk about your expectations here)? And why, in the first place, has it been decided to establish digital sign guidelines?

Paul R. Levy: Market Street East is a 7 blocks shopping and hotel district that is just one portion of a 120 block business improvement district that covers the entire central business district of Philadelphia. In the 19th and early 20th century it was the city’s primary department store shopping district, but it declined for much of the latter half of 20th century. Now, it is the link between a large convention center and the Independence National Historical Park and is being repositioned a hospitality, destination retail, and entertainment district. Digital designs were approved to achieve two objectives: animation of the exterior of several large buildings and the generation of new revenues that can be captured by developers who are seeking to transform obsolete buildings and vacant sites. The guidelines were established to limit signs to only those properties that have a minimum of $10 million capital investment in their building for general renovation purposes, to limit the locations that can have signs and set size and other design parameters.

SSS: How will the digital involvement effect real estate developers? What do owners and developers in the designated area hope for, in terms of revenue increases? Other outcomes?

PRL: Many of our most ambitious proposed renovations require some form of public assistance. But in a time of scarcity, neither our city nor our state has the capital reserves to assist at the required scale. By authorizing signs under specific conditions, our local government is providing developers with a much-needed additional revenue stream.

SSS: Will these signs, which make such an impact on public space, bring public information and art to the area, as it has happened in Manhattan’s Times Square?

PRL: This is one thing owners may propose, but it is not a requirement. In another place in downtown, the PECO Energy building features the artwork of regional digital artists

SSS: In what ways has your program utilized lighting and signage? And my favorite topic: how will the program enhance way finding? Mention some particulars like site-lines, color, type size, dynamic vs static, graphics, animations, or any other feature that strikes you as especially innovative.

PRL: While the CCD has installed pedestrian-scale sidewalk lighting and color-changing coordinated LED on multiple buildings in our performing arts district,  (see sound and light show below)  all of these improvements on Market East will be made by the private developers and owners.

SSS: In general, I’m really interested in how you see urban design evolving for our digital age. What can cities do to make themselves relevant and exciting places to be for a generation that lives on their screens? Will they finally look up and see something more exciting than their Facebook “friends’” blurry pictures?

PRL: I think we are at an exciting moment when property owners and developers are integrating new technologies into their building interiors and exteriors to generate vitality on the street, to generate revenues and stimulate interaction between people on the sidewalk and digital signs on buildings.