Steven Holl Doesn’t See Himself as an “American” Architect

The Daeyang Gallery and House in Seoul, Korea, by Steven Holl Architects Courtesy Iwan Baan This year, the American Institute of Architects conferred its highest honor, the AIA Gold Medal, upon Steven Holl. I had the opportunity to talk with Steven about his sources of inspiration, a mid-career enlightenment, and his recent recognition as one […] 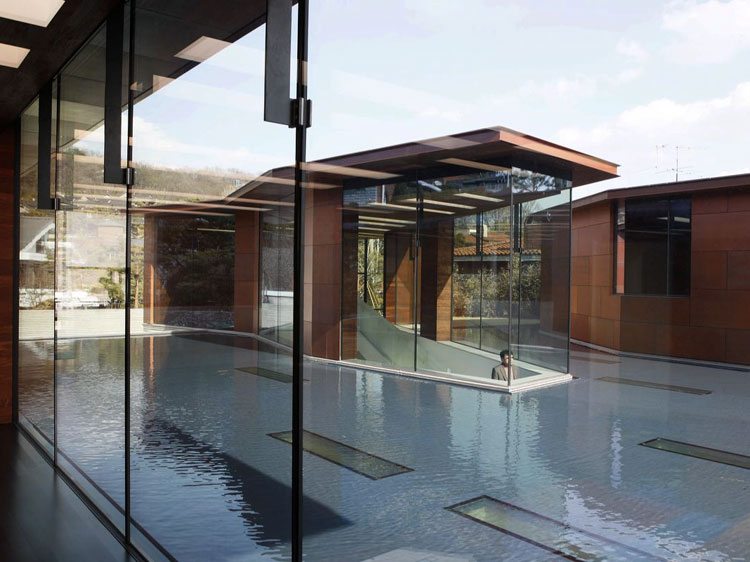 The Daeyang Gallery and House in Seoul, Korea, by Steven Holl Architects

This year, the American Institute of Architects conferred its highest honor, the AIA Gold Medal, upon Steven Holl. I had the opportunity to talk with Steven about his sources of inspiration, a mid-career enlightenment, and his recent recognition as one of the most celebrated “American” architects.

Andrew Caruso: Balancing your practice with teaching and art is clearly a part of the designer we know you to be. How do these explorations shape your design point of view?

Steven Holl: Every project is unique: a site and a circumstance, a culture, a climate, a program. All of these forces are unique and you need a concept to hold the manifold pieces together, an idea that makes the project significant in its place and for its purpose. That is always the way I begin projects.

The chapel of St. Ignatius, for example, was built around the idea of seven bottles of light in a stone box, an idea very particular to their program. The idea that architecture can have a “religiosity”, that it can inspire a kind of reflection about the mystery of existence, is an important ingredient for a chapel.

With all projects, I explore deeply to find an original idea that can drive a design, an idea that can make the building mean more than it would if I was making a kind of style that I move from one site to the next. I’m not a signature architect because I don’t have a signature. Each project is unique. Each project has a relationship to the site, to the climate and to other forces. 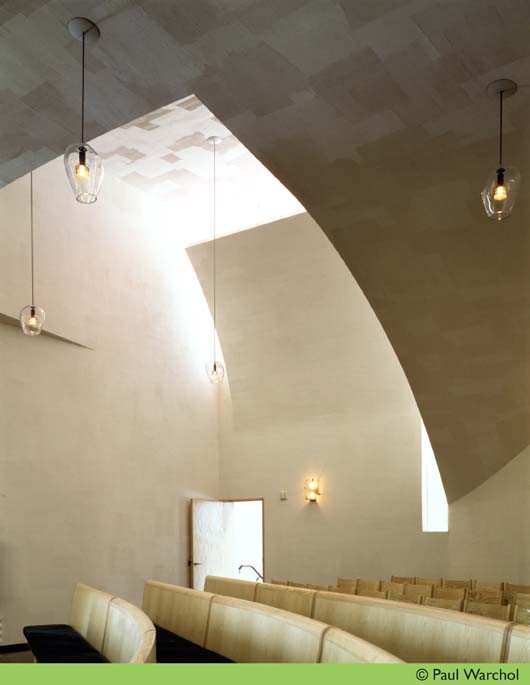 Chapel of St. Ignatius in Seattle

AC: During your career, you experienced a radical shift in the direction of your design philosophy. How was this evolution influenced by phenomenology and the writings of Juhani Pallasmaa and others?

SH: Wittgenstein said there is no such thing as phenomenology, there are only phenomenological questions. I agree with that reflection. I reached a dead end in my thinking and work around 1984. I had been trying to transform building typology as a way of going forward; the notion of the morphology of a city and building typology came from the Italian rationalist movement. I was trying to find an American 21st century way of thinking, and I felt that was a dead end. Because I was teaching and didn’t have that much work, I immersed myself in texts. Matter and Memory, by Henri Bergson, was a key text for me; it speaks about time as ‘duration’ and the experiential dimension of existence as being the most profound and important one.

In a time when computer screens and handheld devices become the way we experience the world, I think architecture has a more urgent role to play in engaging all the senses. I think it is a great time to be an architect because architecture changes the way we live.

AC: How did you engage these texts?

SH: I made projects. A seminal moment for me was the Porta Vittoria competition for the Triennale in Milan. The normal pattern of an architect is to come up with a programmatic plan and section and then create perspectives. We did the opposite. We made perspectives first and then projected them backwards into plans and sections. For a city sector in Milan there were a number of buildings to be done, and no program was written. So equally in reverse order, we found programmatic things in a method I called semi-automatic programming: making programmatic suggestions backward into designed spaces. We also created a prepositional chart as a way of making the sections very rich. I said there were only four types of architecture: under the ground, in the ground, on the ground, and over the ground. You could then add the word “between” to create additional conditions.

I remember when our project was received in Milan they were blown away because it seemed from outer space for that moment in time and its projections on the city. 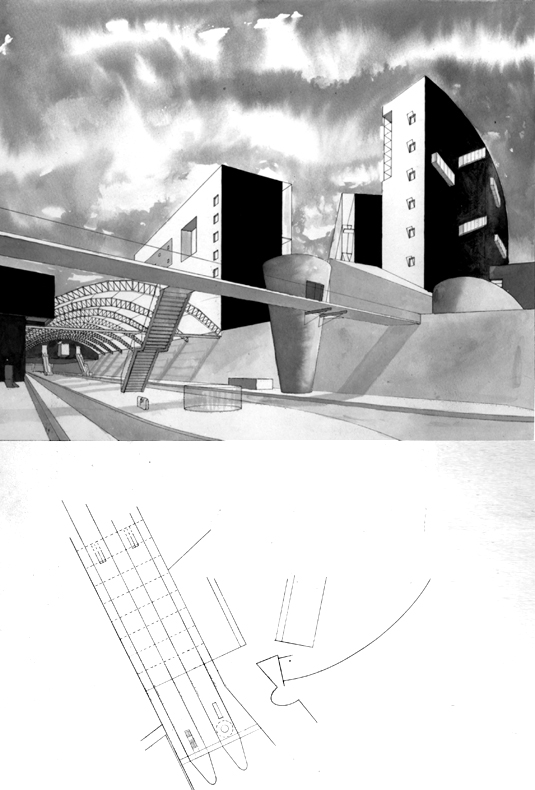 Illustrations for the Porta Vittoria project of 1986 demonstrate a process of urban design using a series of partial-view perspectives, which were drawn a priori and cast backwards into plan fragments. These fragments were later assembled into a “whole” urban plan, according to a concept of centrifugal movement from heavy to light in reverse of the sprawl tendency of the current city of Milan.

AC: Patterns of practice today are certainly global, yet you’ve been specifically described as an “American” architect? Why then does this type of nationalistic (or at least continental) label persist? Does this label resonate with you?

SH: I never considered myself an American architect. I was educated in Rome and London. My first buildings were done in Japan. My first major museum was realized in Helsinki. My practice is all over. Not that I don’t love America, but I don’t really see the need to be nationalistic about architecture. It’s like music; if you’re the conductor of a big orchestra, your biggest aspiration is to play all over the world. I think that will continue to happen more, and I don’t think it’s a bad thing. The more aware we are of the whole condition of the planet, the more we can act together to restore natural landscapes and build buildings that are responsible for making a better place out of this earth.

AC: You talk about being able to blink an eye and move on as soon as a project stops; maybe one in 30 projects is realized. How do you thrive, or even survive with this reality?

SH: It is a way of taking the optimistic as a method. One of the most exciting things of any project is the beginning, getting an idea and trying to find form for that idea. It carries the whole team and everyone gets very excited, and then you present the competition and don’t win. But you get the great excitement of beginning a different project again instead of working for eight years trying to realize the one you lost. It’s a lot of work realizing a building; let’s say a minimum of six years for a larger project.

I’m not complaining about one in 25 or 30. In a certain sense it has allowed me to have more ideas and more potential concepts for architecture today than if I had to build everything. I’d be stuck in meetings all day. 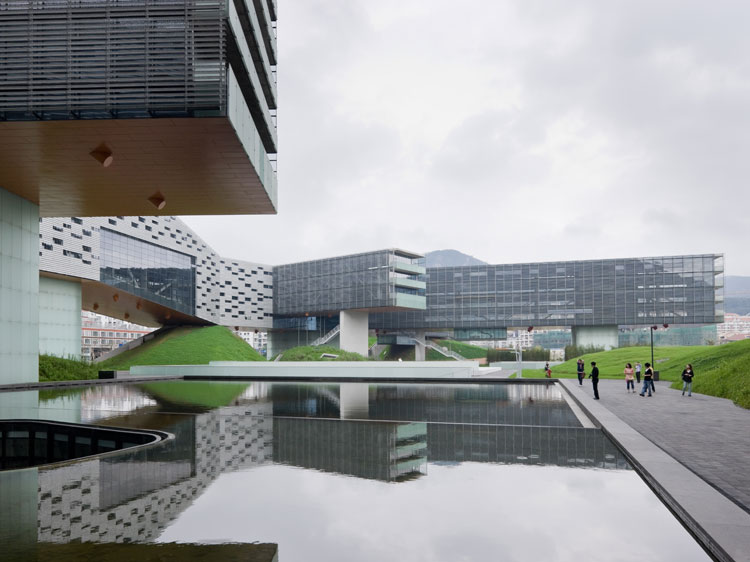 Horizontal Skyscraper – Vanke Center, the decision to float one large structure right under the 35-meter height limit, instead of several smaller structures each catering to a specific program, generates the largest possible green space open to the public on the ground level, Shenzhen, China.

AC: You talk about capturing ideas for projects in your famous watercolor paintings. Why watercolors?

SH: It’s a more elaborate technique. Someone can scratch an idea in a piece of charcoal on paper, but by making the concept diagram slightly more elaborate, I introduce light, color, and texture in the beginning thought.

With watercolor, it’s about the movement of light across a surface. Right from your initial thought about a building or space, the wash brings in the condition of where the light is coming from. Shade and shadow, light and geometry; they’re all in there from the beginning.

AC: When did you first pick up a watercolor brush? 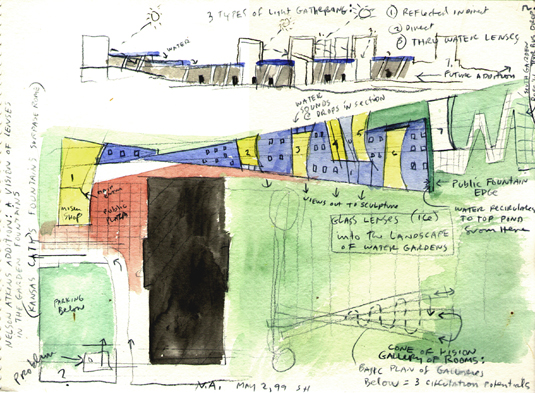 AC: Your father still lives in the very first house you designed. How long has he been there and what has it been like watching the lives of your father and of the building become entwined?

SH: He’s lived there since 1974. My mother always complained that the kitchen was too small and she was right. [Laughs] I never published that house because I wasn’t ready.

One of the nice things is that there are great lessons in that house. I work to the golden section, in a way that’s my classical connection to the history of architecture.

But in that first project I developed two systems that were very complicated. I had been studying Le Corbusier and tried to come up with something original. In the end, the dimensions required cutting from construction materials larger than standard sizes, so there was enormous waste in the construction of this little house. You learn these lessons. The house is full of little naiveties that were learned in the making. That’s part of growing up.

AC: Why didn’t you feel ready to publish that house?

SH: It’s about not being satisfied. Inside there is a curved stair that my father built to connect three floors, and it is perfect. If only I could publish that by itself. The builder said he couldn’t do these complicated things, so my father did it on the weekends. He was going so fast that the builder wasn’t catching up. The stair became this little tower sticking up out of the construction site, made in plywood and special water-bent sheetrock. It looks great today. It has held up all these years.

My father had a sheet metal company, so when I was 14 or 15, I used to make ductwork. I laid out very complicated geometries, so maybe that level of geometry came from working with my father.

AC: Were you surprised to be featured in Time, a publication whose content is typically beyond the specificity of our industry? You don’t often see coverage of architects in this type of national (or global) media.

SH: I think it is important, and I really believe that architecture is important. I agree with Winston Churchill’s reflection, “First we shape our buildings and then they shape us.” One of the sad things today is that there aren’t enough architecture critics. Exposure to and criticism of architecture needs to be covered because it’s very important to the way we live. When a great building is realized it should be covered, analyzed and studied. It’s rare. And it isn’t just a talented architect; it’s the collision of a great client and a talented architect.

AC: It strikes me that you’ve gone from a young architect hesitant to publish the home he designed for his parents, to being featured by Time Magazine. How do you make sense of that kind of trajectory?

SH: [Laughs] A lot of years between those two. I don’t make sense of it. It doesn’t seem quite possible. I really love my work; it’s what I would rather do. I don’t like vacations because I love to draw, paint, and work. I have a lake house, but when I go there I work on the projects at hand. That’s my greatest enjoyment.

From the early days until now, the part that isn’t surprising is that if you’re obsessed with what you’re doing, if you work hard enough, and you’ve got a little bit of talent, you’ll get somewhere.

Andrew Caruso, AIA, LEED AP BD+C, CDT, publishes and speaks internationally on issues of talent within the creative industries.
A version of this article originally appeared on the National Building Museum Online.