Q&A: Wendell Burnette on the Architecture of Place

The architect and former Taliesin fellow discusses why landscape matters.

Wendell Burnette’s journey through architecture has taken him from Frank Lloyd Wright’s Taliesin to some of the most beautiful landscapes in the world, where he has designed a type of architecture that resonates with the power of natural surroundings. It has also taken him to one of the world’s fastest growing cities, Phoenix, Arizona, where his practice, Wendell Burnette Architects, is based and where he calls home. More recently it has brought him to Los Angeles where he is the current Nancy M. & Edward D. Fox Urban Design Critic at the USC School of Architecture. He is also Professor of Practice at The Design School at Arizona State University’s Herberger Institute of Design and the Arts.

I spoke with Burnette about his approach to architecture, the importance of direct experience, and the meaning behind his current USC studio, “Earth Curvature”.

Guy Horton: I’m struck by how your work seems to be defined by a deep understanding of place. How do you achieve this?

Wendell Burnette: “Presencing” program is one way. When a building expresses its mission and engages the street it can be understood even from passing cars, or passing by on foot, as well as from the inside. A project like Maryvale (Palo Verde Public Library/Maryvale Community Center), for example, expresses a spirit of civic engagement. It reveals itself as a place for people, a place people want to be. In this sense, architecture can be inspiring programmatically. It gives something back by honoring the program and making it more transparent to the outside. Maryvale is a case where we re-presented a public program that had been hidden behind block walls. The old community center was like a cellblock. Now it’s a mind-body dialogue with the library and community center/gym both being revealed. This is one way you can get people to understand it’s there for them. Architecture can also embody the remembrance of a site, its history as a place. 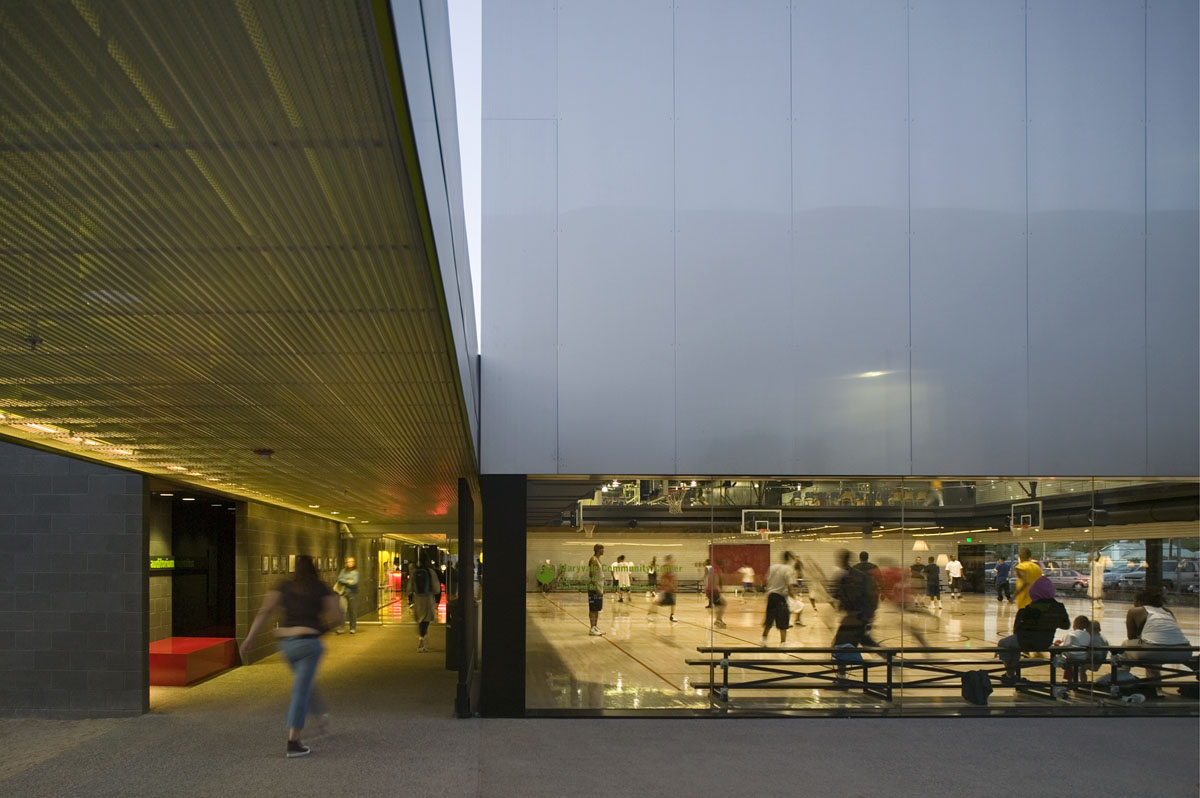 The library was designed as a response to the closed nature of typical community buildings and based on the belief that transparency can transform a community. Older public buildings in this area of Phoenix had become territorialized by race and neighborhood gangs. The project preserved existing green spaces and connected recreation and community functions with a library.

GH: What was your experience like at Taliesin, the Frank Lloyd Wright School of Architecture?

WB: I was interested in architecture from a young age and chose to go to Taliesin because I wanted to learn through doing and I liked the idea of studying in two very different locations based on the seasons, Taliesin East in Wisconsin and Taliesin West in western Arizona. It was a way of observing and experiencing the world through these extreme contrasts. My first project was built at Taliesin West. It was a type of sheep herder’s tent I devised, built, and lived in for the three years I was there. We would spend one third of our time working on real projects, one third on construction, and the last third on maintenance like working on plumbing or serving in the kitchen. It was very communal. When I was there it was still very small. There were about forty senior apprentices and thirty junior. Taliesin West was also where I fell in love with the desert and decided that that was where I wanted to practice. Phoenix is very much a city in the making and I was interested in how you make places where there is nothing, or very little, in terms of a built environment.

GH: Besides your time at Taliesin most of your education in architecture has been through independent study rather than the more traditional  academic route. How do you think this makes a difference in terms of your approach and philosophy? And how does this translate into your teaching in formal institutions?

WB: I felt I could bring a different perspective, a perspective of practice with an emphasis on the power of direct experience rather than learning about architecture in the abstract. It’s a reciprocal relationship between me and the students. The students have diverse backgrounds and points of view and this is also an influence on me. It keeps me on my toes. 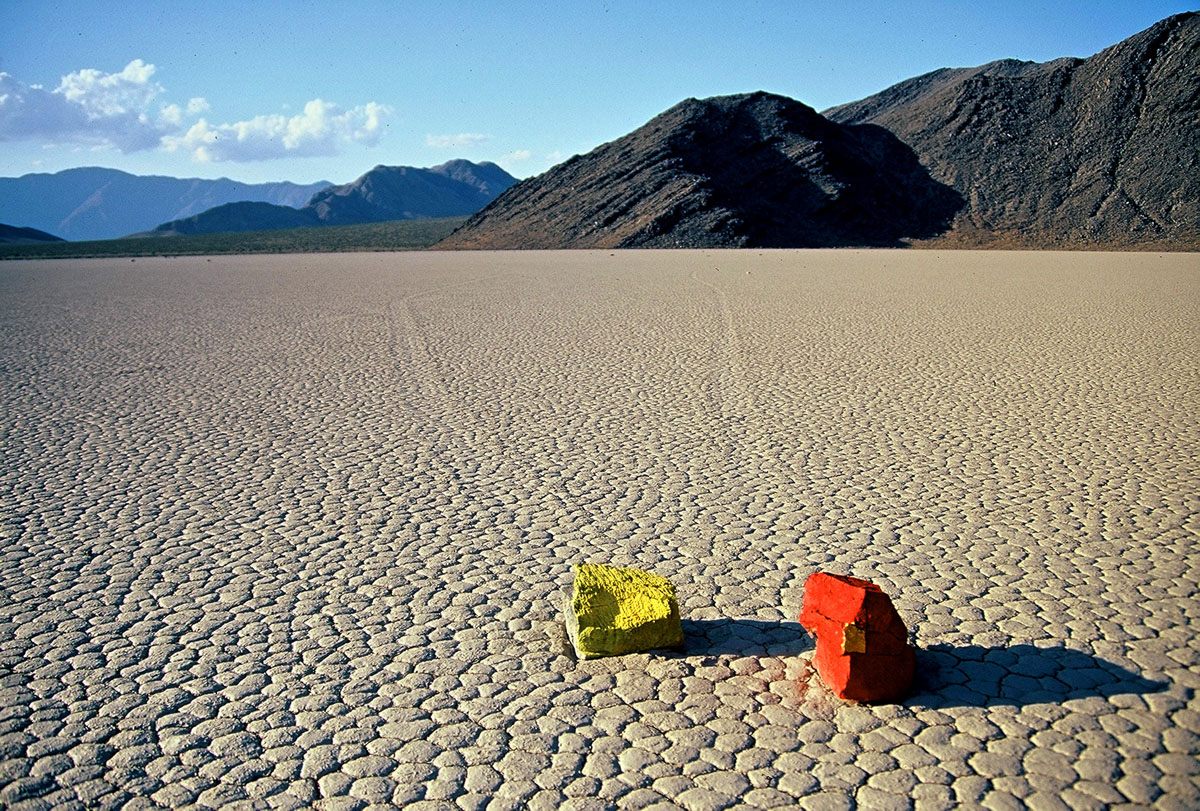 The Racetrack Playa at California Death Valley National Park is one of Burnette’s landscapes of inspiration. For him it speaks to the specificity of place or “context as material”. This scenic dry lake bed is known for its “sailing stones”, a geological phenomenon where slabs of dolomite and syenite are thought to be pushed by high winds, leaving tracks on the playa surface. 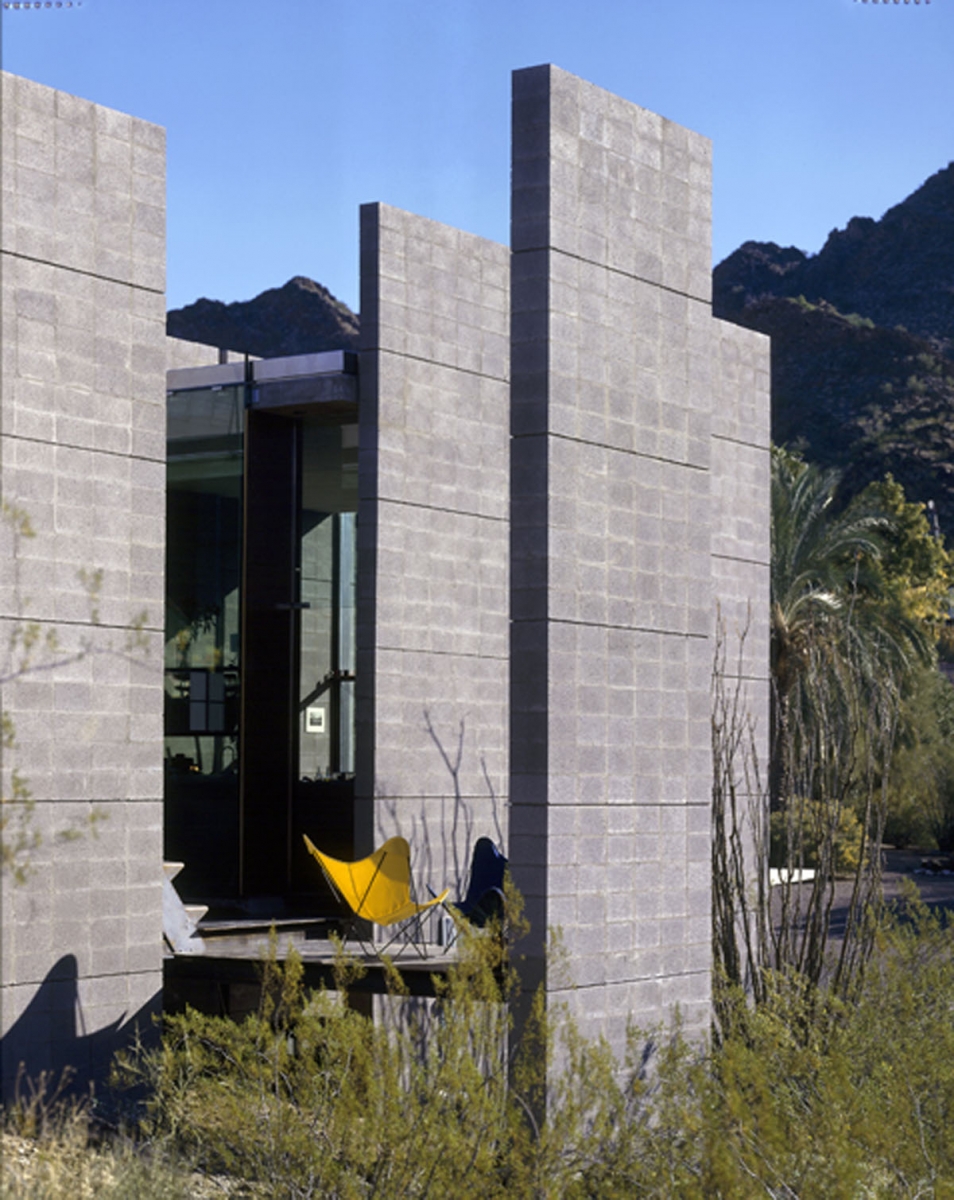 Burnette’s own house in Phoenix, Arizona, is an example of his sensitivity to context and his ability to make legible the specific natural forces that define a site. The house, orchestrated within light weight concrete block monoliths, acts like a man-made canyon one can drive or walk up into. 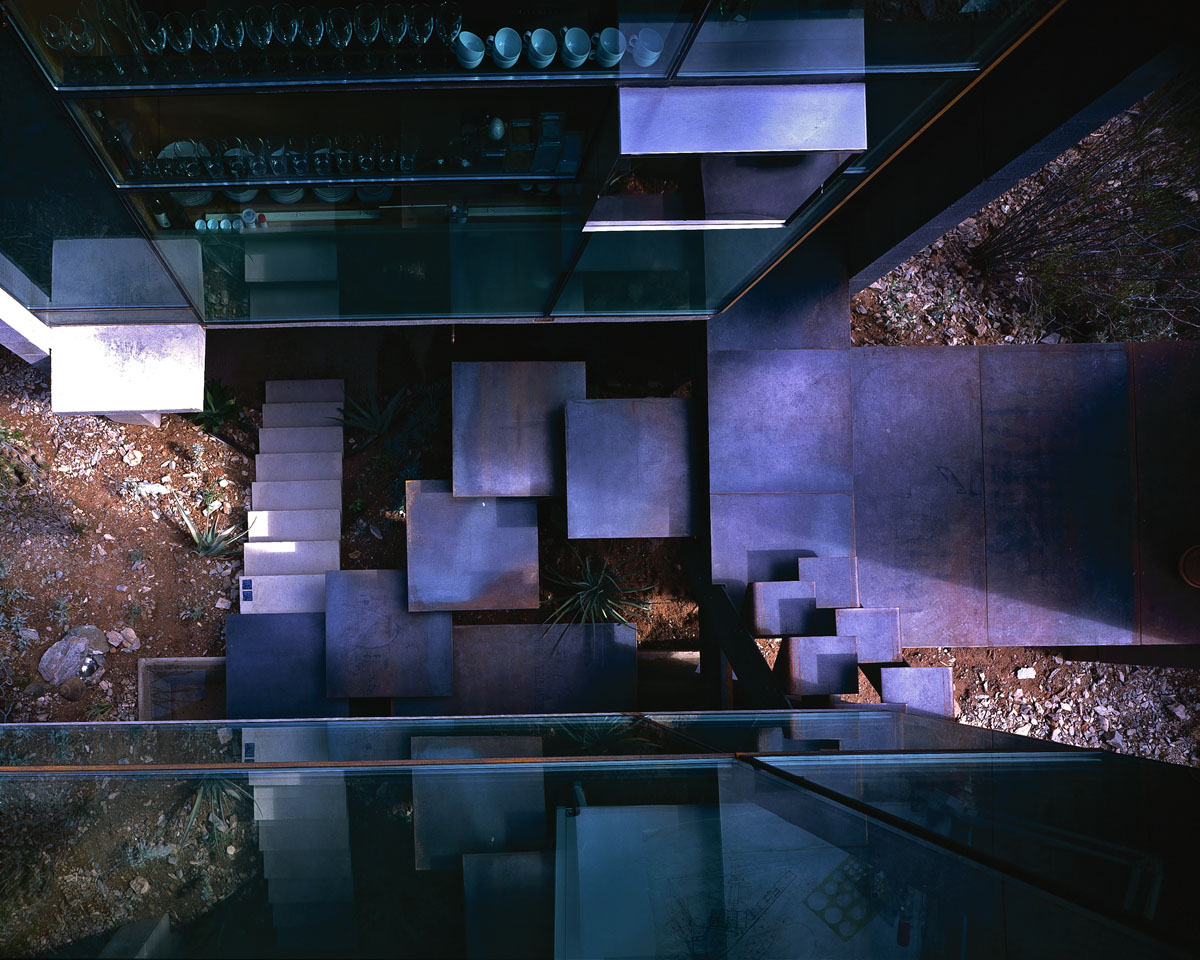 The house is composed as a “series of multisensory moments” that extend the topography of the site. A desert garden with an evaporative cooling pool defines the entrance, unifying the house’s front and back volumes and suffusing the space with the sound of falling water.

GH: What brought you to USC?

WB: Last summer, Gail Borden, discipline head of architecture and director of the graduate program, brought his field studies studio to Arizona, and I took them around to some different projects. Showed them my house, the desert, what Phoenix is like. We started talking about doing a studio as soon as the opportunity came up.

GH: Your current studio is called “Earth Curvature.” What is it about?

WB: Being interested in direct experience, I try to work with students to help them engage the environment they are working in. Even though we are in a very dense urban setting here in Los Angeles, the studio asks them to examine a remote landscape. We are looking at the I-80 portal to Salt Lake City. While the studio looks at a more remote setting, its essence is to teach students how to read places they are more familiar with by engaging the unfamiliar. How do you perceive the normal with new eyes, or reach an understanding of the deeper context of a place?

GH: Coming from the vast desert landscape, how do you view architecture in relation to dense urban settings? And what does architecture potentially contribute to a city?

WB: I’ve always been interested in community, making places, urban or elsewhere. I’m interested in placemaking, architecture that resonates with place and programs that engage society. This isn’t purely intellectual. It’s more about a gut reaction, a feeling. If people have to read a script about what you’ve built then you’ve failed. If they can feel the architecture then they can cherish it. Then they will want to defend it and it lasts. This is sustainability in a different sense.

GH: Given your background and where you come from, what’s it like thinking about architecture in Los Angeles?

WB: Actually, staying here is a different way of engaging the city, a new way for me since I’ve always just passed through. You just try to engage it with passion, engaging the world. It’s not always quantifiable. There is always an urban setting whether micro or macro. It’s important to think about human behavior, private and public realms. Like the Amangiri project. It’s like a little city in the desert. Ultimately I think it’s about how you presence a place in the world and how you are present in it. 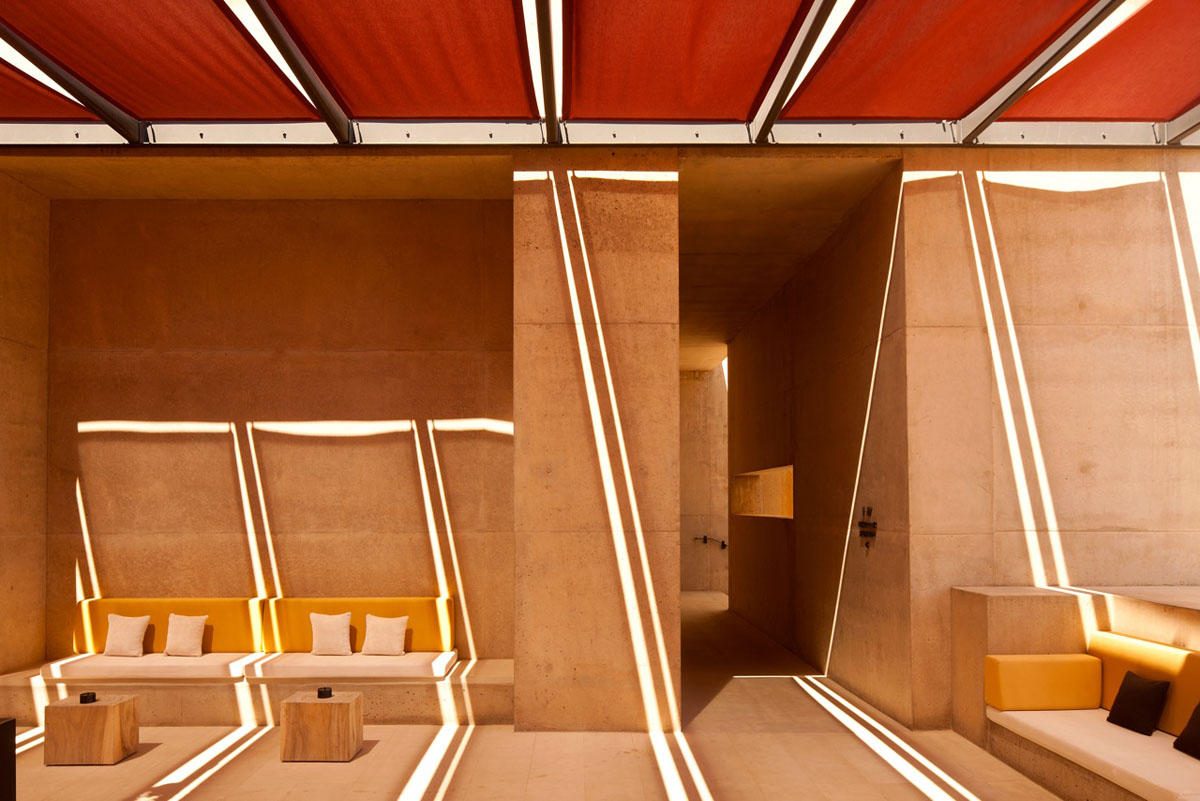 “A dream project,” says Burnette of the Amangiri Resort and Spa in Southern Utah. Amangiri acts like a “settlement” in the midst of a remarkable landscape defined by high cliffs and dramatic rock formations. Burnette cites Octavio Paz’s poem, “Wind and Water and Stone” as a guiding inspiration for the evolution of the design. The structure’s reflective concrete finish was achieved by using thin foam panels as formwork, the same process employed by Louis Kahn and Tadao Ando. Local sand, aggregates, and fly ash lend the resort the character and color of the surrounding landscape.

WB: Japan was very important for me. I think this is linked to the powers of landscape and site we just talked about. This is what attracted me to Japan, the layered and sequenced spaces of the gardens and temples. I must have visited forty gardens and temple compounds in and around Kyoto and Nara, including Ise Jingu. These are places I had taken notes on in books that had been sitting on my shelves for twenty years. In these spaces the buildings are never separate from landscape. The gardens contain and frame abstractions of larger landscapes that unfold through a spatial sequence that starts with the street. In this sense, the context of a Japanese garden is an urban condition, becoming more complex as you move in. It’s a lot like Los Angeles, in fact.

GH: Your designs give off this feeling of being intimately connected to the landscape, like they just belong there. Could you talk about how site and landscape inform your work?

WB: I grew up on a farm just outside of Nashville and from an early age I was passionate about nature and building. I used to construct my own spaces in my backyard, down by the creek, or in places I thought had something special to them. I’ve always thought spatially, and the special character of places resonates with me. It’s how I see the world and how I practice. When I walk onto a site for the first time, I try to listen to or read what is already there and then amplify that. It’s never about destroying a place. It’s about the layering of meaning to create a sense of place.