Watching the Academy Awards ceremony last Sunday, I waited eagerly for a section I don’t usually pay much attention to – the award for Best Documentary: Short Subject. As Jake Gyllenhall and Amy Adams opened the envelope, I was rooting for The Warriors of Qiugang, the rousing story of Chinese villagers who are protesting a […]

Watching the Academy Awards ceremony last Sunday, I waited eagerly for a section I don’t usually pay much attention to – the award for Best Documentary: Short Subject. As Jake Gyllenhall and Amy Adams opened the envelope, I was rooting for The Warriors of Qiugang, the rousing story of Chinese villagers who are protesting a pesticide factory that is poisoning their lives.

Filmed in 2007 by Ruby Yang and Thomas Lennon, and co-produced by Yale Environment 360, the film follows the fortunes of the farmer Zhang Gongli, who is determined to have the chemical plant shut down. Its effluents have contaminated the village’s water sources, killing off the fish in the river, the crops in the fields, and over fifty people in two and a half years. The 39-minute film is full of colorful characters: conniving factory employees, angry villagers, the officials who are bribed to turn a blind eye, the city-bred environmentalists with their idealism, and my favorite, the village headman’s aunt who knows that her nephew is in cahoots with the factory and does not approve. As the inevitable things happen – villagers are beaten up, Zhang is threatened, and the factory re-opens – I realize that this is also a familiar story.

A scan from the October 1988 issue of Metropolis. Photos: Donna Mitchell.

In Metropolis’s October 1988 issue, photographer Donna Mitchell wrote a strikingly similar tale about Ponca City, Oklahoma. While taking some photographs of protesters at the Oklahoma State Capitol, Mitchell ran into Lester Burns, a member of Ponca City Toxic Concerned Citizens (PCTCC). The oil giant Conoco – then owned by DuPont – had its biggest refinery in Oklahoma in Ponca City, and the smoke from its chimneys was making the lives of the locals unbearable. Worse, petroleum products from the company’s tanks were leaching into the soil and the water table. Citizens had begun complaining of breathing problems, but they were also contracting cancer.

What followed was long, protracted legal maneuvering between the citizens, Conoco, the Environmental Protection Agency (EPA), and the Oklahoma Water Resources Board (OWRB). Cases were filed by Ponca City families as early as 1973. Conoco made a $265,000 settlement for property damage and medical bills, but took no responsibility, blaming the pollution on “earlier refinery operations.” Studies sponsored by the EPA and the OWRB proved so tangled and inconclusive that they were not actionable. It was not until 1985 that Conoco was sent a compliance letter requiring it to take note of the effect it was having upon the environment. When Mitchell finished her story in 1988, Conoco had yet to take any action, and the Oklahoma Office of Public Affairs had removed the protesting PCTCC members from the grounds of the State Capitol.

There was some media buzz around Ponca City at the time, including a mention in the New York Times. And two weeks after the Metropolis issue appeared, the travails of Ponca City were featured on ABC’s World News Tonight with Peter Jennings. Eventually, the contamination was contained. But a quick internet search suggests that the tension between the refinery and the townspeople has never really gone away. There’s a video titled Ponca City and the Toxic Tour on youtube.com, made by some young people on their way to the 2010 U.S. Social Forum in Detroit, MI. They were hosted by the Ponca City Native American Nations who are still protesting the contamination of their lands. 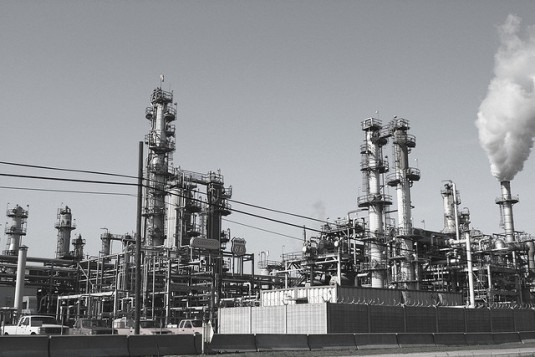 A lot has been said about emerging economies like China repeating the environmental crimes that the industrialized nations committed half a century ago. But it is still shocking to find parallels like Qiugang and Ponca City, with an almost one-to-one correspondence. If Ponca City’s wounds still fester, it does not bode well for Qiugang, unless some decisive action is taken. I don’t really care that the documentary didn’t end up winning the Academy Award, all I hope is that the warriors of Qiugang eventually win their battle.

Watch The Warriors of Quigang in full, on the Yale Environment 360 web site.