Artist David Lefkowitz creates speculative structures on and out of corrugated cardboard.

On a recent Saturday afternoon I slipped into Soo Visual Arts Center (SooVac), an alternative gallery in Minneapolis, to take in Austerity Plans: Corrugated Drawings by David Lefkowitz. The show is a mini-retrospective of the Minnesota-based artist’s work, namely his watercolor drawings of architectural studies on splayed corrugated cardboard boxes. The soft, porous surface provides a compelling textural contrast for Lefkowitz’ precise but expressive drawings, executed in a muted palette of reds, blues, greens, oranges, and browns. The irregularly shaped works, pieced together like puzzles, reveal all the creased edges, stamps, and tears that result from manipulating the material.

Of course, Lefkowitz is hardly the first artist to paint on cardboard. What distinguishes his practice, however, is that his subject matter—the speculative structures he draws—are actually constructed from cardboard boxes themselves. Boxes are his virtual building material, not wood or brick. This playful conceit is subtle enough that a group of 20-somethings visiting the show never noticed.

Lefkowitz’ buildings have uncomplicated descriptive titles like Observation Tower, Blue Concourse or 65 Improvised Structures, a grouping of small-scale individual works laid out in a grid. Most reflect a modernist sensibility with oblique nods to the likes of Peter Behrens, Gropius, Le Corbusier, Mies, Wright, and Neutra. That said, classical architecture rears its head in pieces such as Palenque Hotel Reconstructed and Housing Block with Poplars, both of which sport plinths, columns and architraves—all made from stacked cardboard, of course. 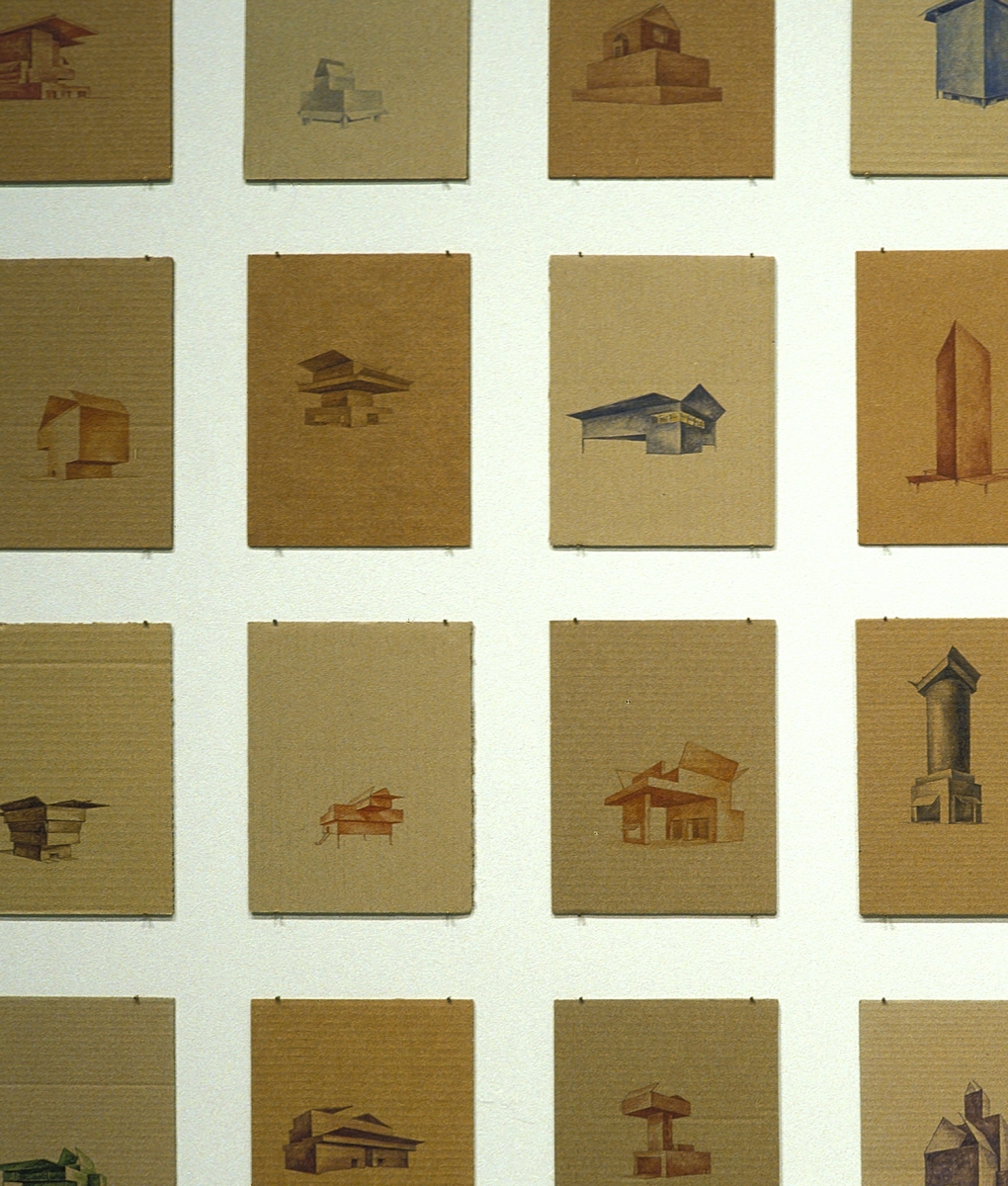 Austerity Plans surprises with its visual acrobatics. Technically accomplished, the structures evolve in a subtle manner from empty space to full-fledged building. At their foundation they are simply boxes. But as the structures rise up into the space of the picture, they become sharply defined forms. In Cultural Institution, Loading Dock Entrance, boxes are not only just the loading docks, but also the steps leading to the two portals, the crates stored inside, and the shadowy institution looming behind. In Observation Tower, the uppermost box is balanced on stilts, accessed by a ladder through a trap door. Its walls are punctuated with windows, while the box’s top flaps open to the sky like an observatory. This is one of the few traces of human presence. 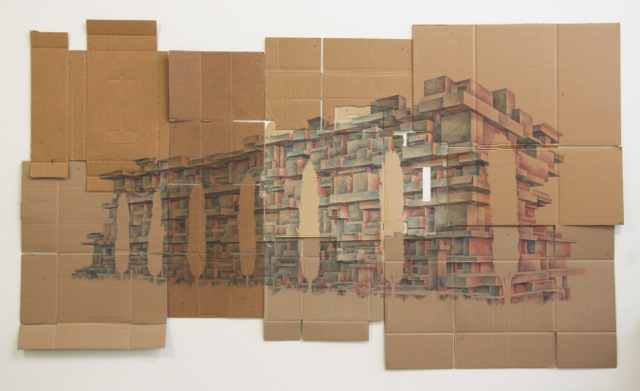 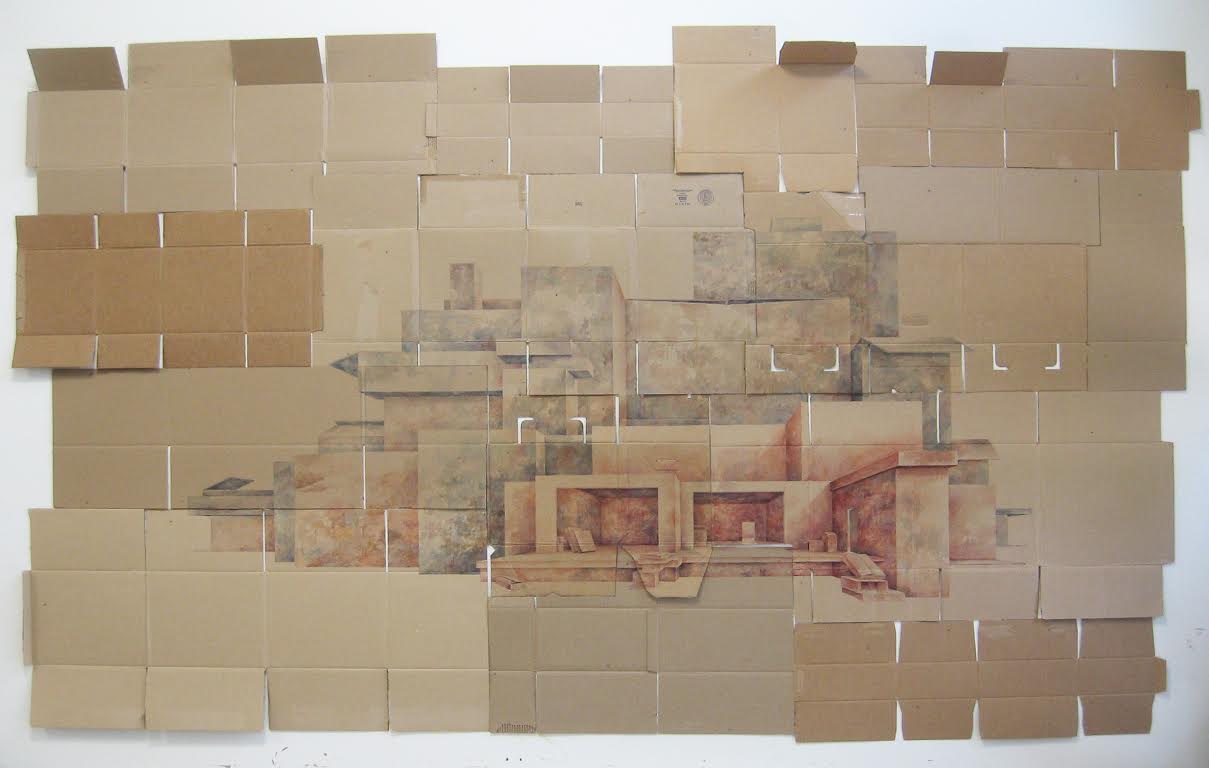 Lefkowitz also employs perceived negative space to great advantage. He allows actual holes in the cardboard and gaps between boxes to function as compositional elements, lending the pieces surprising depth. In Crevasse, for instance, a field of tightly packed boxes is riven by geological-like fissures whose lines stretch out over panels of cardboad. A spatial tour de force, Crevasse reveals not only Lefkowitz’ technical skill but also his fertile imagination. Likewise, 65 Improvised Structures is a delightful catalog of imagined architectural forms, which take stock from the history of contemporary architecture. There are references to Adolf Loos’s ironic design for the Chicago Tribune Tower competition, a Miesian office tower, and Breuer’s Whitney Museum, among several others. 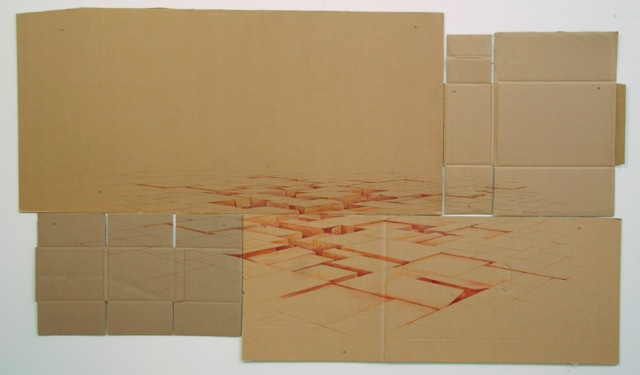 Undergirding Lefkowitz’ sophisticated and clever work, which he has pursued for a decade, is a critical commentary on “culture’s cavalier attitudes about resource use.” The work prompts dialogue about our cultural notions of what is permanent and what is disposable, what has value and what does not, and how we overlook or mismanage common resources. Lefkowitz describes his approach as “a kind of awkwardly articulated policy statement about how to make more out of less.” Being art, it assigns value to the ostensibly valueless.

“In this batch of work I’m drawing on my inner bricoleur—the resourceful scavenger who reconstructs the world from residue culled from the scrap heaps of consumer capital,” Lefkowitz explains. “Yet, because of the flimsiness of the material, I also hint at doubts about the efficacy of such efforts. I want to acknowledge that such a pursuit is at once worthwhile and ridiculous.”

Mason Riddle is a writer based in Saint Paul. She covers the visual arts, architecture, and design. Her reviews and articles have been published in Architectural Record, Architecture MN, Artforum, Dwell, The Star Tribune, Public Art Review and Rain Taxi, among others. Her article, Game Plan, explored the textile work of, Alighiero Boetti in the Italian conceptual artist’s MoMA retrospective and appeared in the winter 2013 issue of Surface Design. She is former director of The Goldstein Museum of Design and MN Percent for Art in Public Places program.