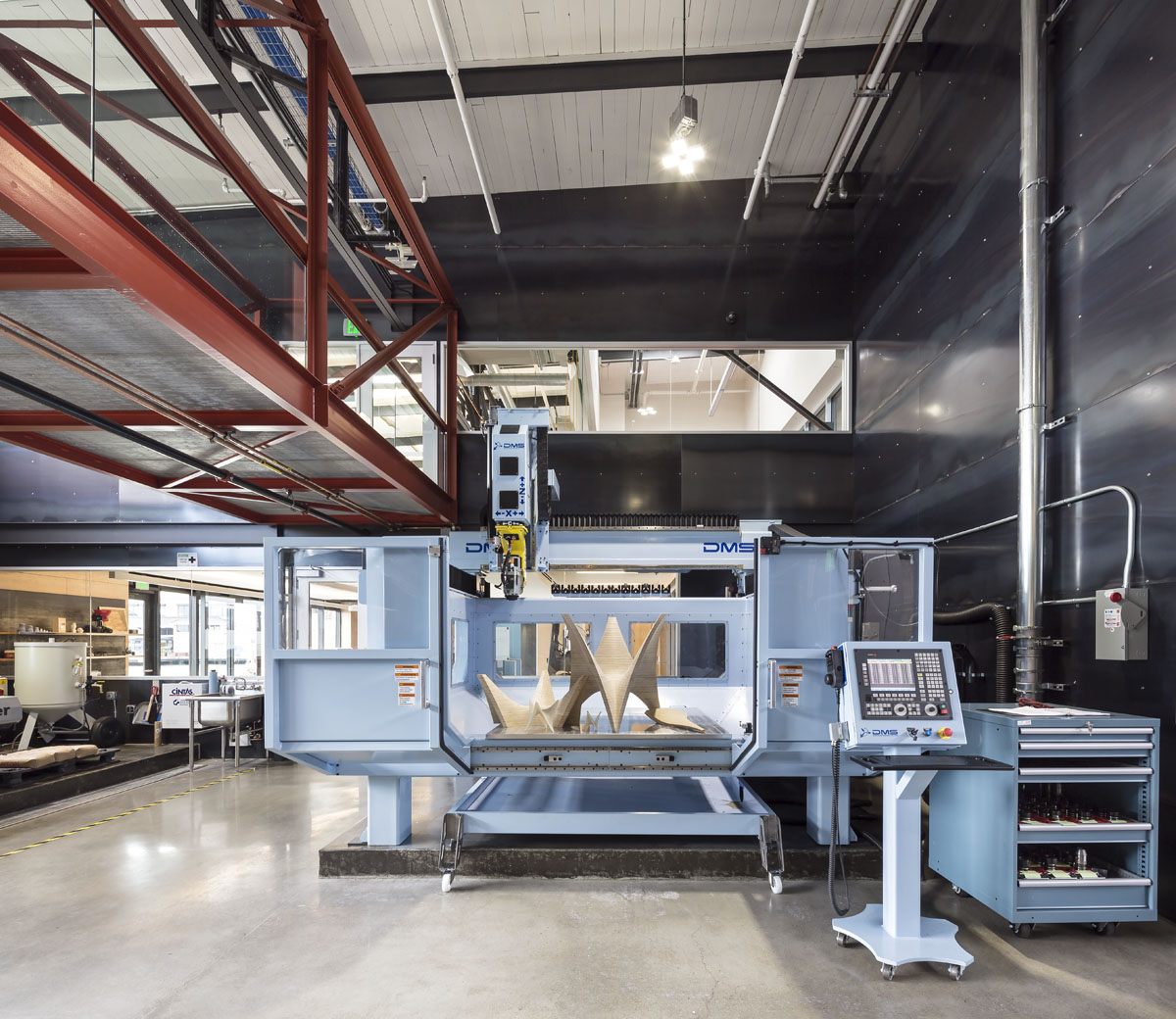 On the shop floor of the new Autodesk Workshop at Pier 9, a model takes shape in the DMS 5-Axis overhead gantry CNC machine.

All photos by Blake Marvin, unless otherwise noted.

Lined all along the waterfront of San Francisco’s Embarcadero, is a series of uniformed piers. From the front they are polished and historic, but their Beaux-Arts stucco exteriors give way to a bulkhead of heavy timber, steel trusses, and concrete aprons. Most are nothing more than aged and hollow warehouses, forlorn vestiges of old-world industry. Think Upton Sinclair, wartime efforts, tugboats, and straight rye whiskey.

Two years ago, the software company Autodesk decided to convert Pier 9 into a digital manufacturing facility where they could build and test products. The Autodesk Workshop would showcase a millennial version of industrialism, in which minds, machines, and computers convolve—instead of tugboats and whiskey, think CNC machines and shots of Fireball.

The man commissioned to amalgamate these two worlds was Olle Lundberg, from Lundberg Design. He is an architect with a sculpting background, known for his free-flowing creativity and ability to transform any space. “A lot of the work done on the port buildings has been overtly retro, and we were trying to get away from that, trying to make something that was more interesting, and had a more modern character to it,” says Lundberg.  Using a simple palette of cement board, steel, and plywood, but a tremendous amount of craft, Lundberg was able to celebrate the old structure while creating a new aesthetic. 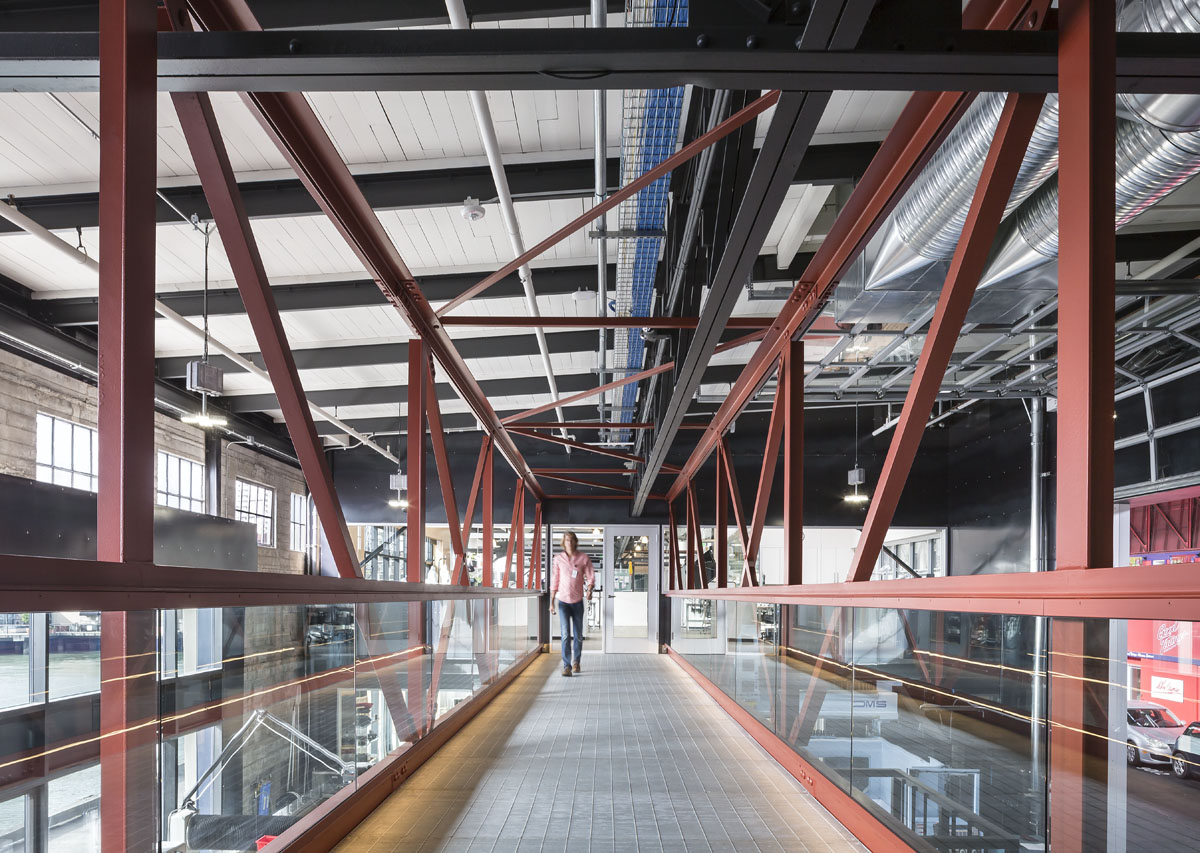 An overhead pedestrian bridge runs across the shop floor, connecting it to the office spaces on the mezzanine level.

Inside the enormous pier is a drive aisle and false exterior facade made from geo-board and aluminum panels. A sketch of the yellow Instructables robot serves as doorman. “The character of the old shed dominates, and is the unifying element that runs through. But the expression varies, depending on where you are within the building,” Lundberg says. The ground floor hosts the various workshops, each with its own unique tilt to accentuate the differing use of space.  The woodshop is paneled with plywood walls, the metalshop dressed in steel. The state of the art 3-D printing-lab, in a sleek white finish, resembles the Construct in the Matrix.

The metal shop is by far the most dramatic, with double height space. Raised rolling steel warehouse doors overlook the bay, and a pedestrian bridge, aptly painted in Golden Gate Orange, passes overhead.  The narrative of old industry and new technology are quite literally welded together here—the lofty visions from the office space on the mezzanine level of the pier are often made a physical reality here in a rainfall of sparks. 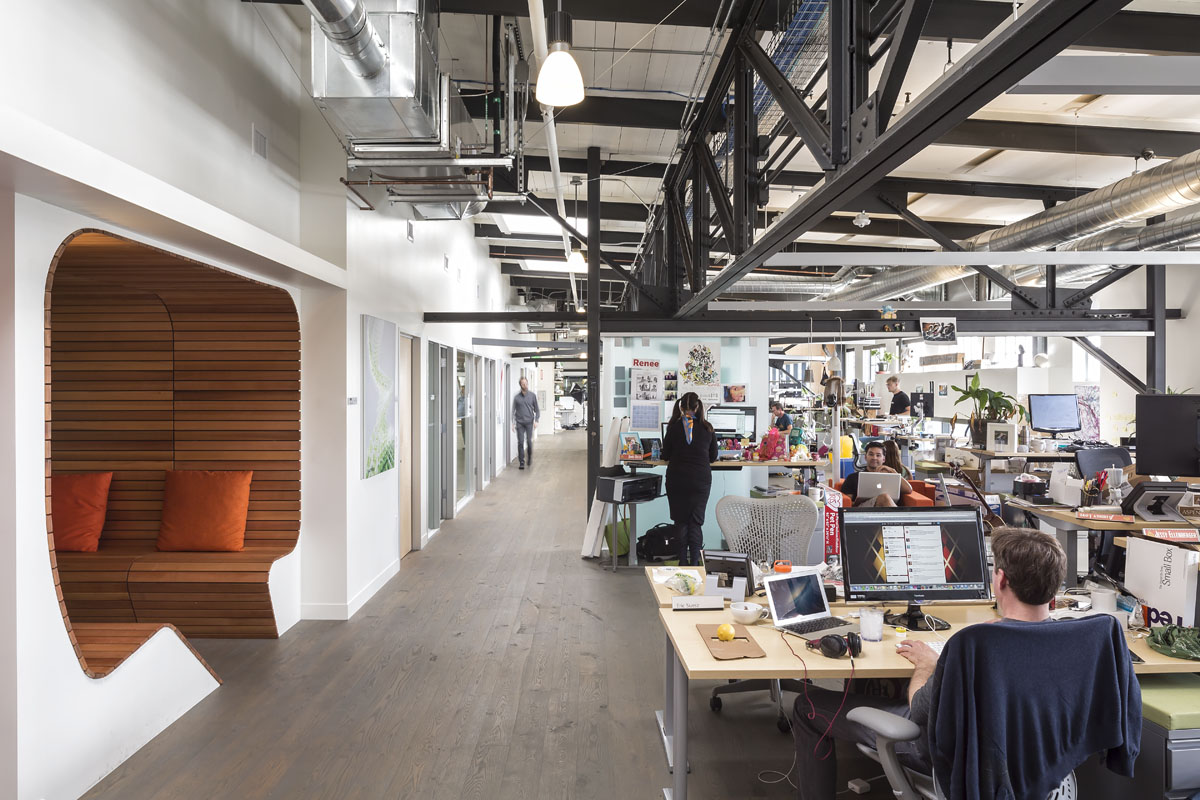 The Workshop is a place where Autodesk makes and tests new products. Ideas generated in the office space can be quickly prototyped and tested with the facilities in the shop floor below.

Everyone who works here can stand on tiptoes and touch the exposed I-beams that, not long ago, were the building’s rafters. Tables, computers, and bodies crowd the open area in a beehive of creativity. A wood-paneled alcove, shaped like a speech bubble and cut into the wall, provides a private meeting space and respite from the buzz. 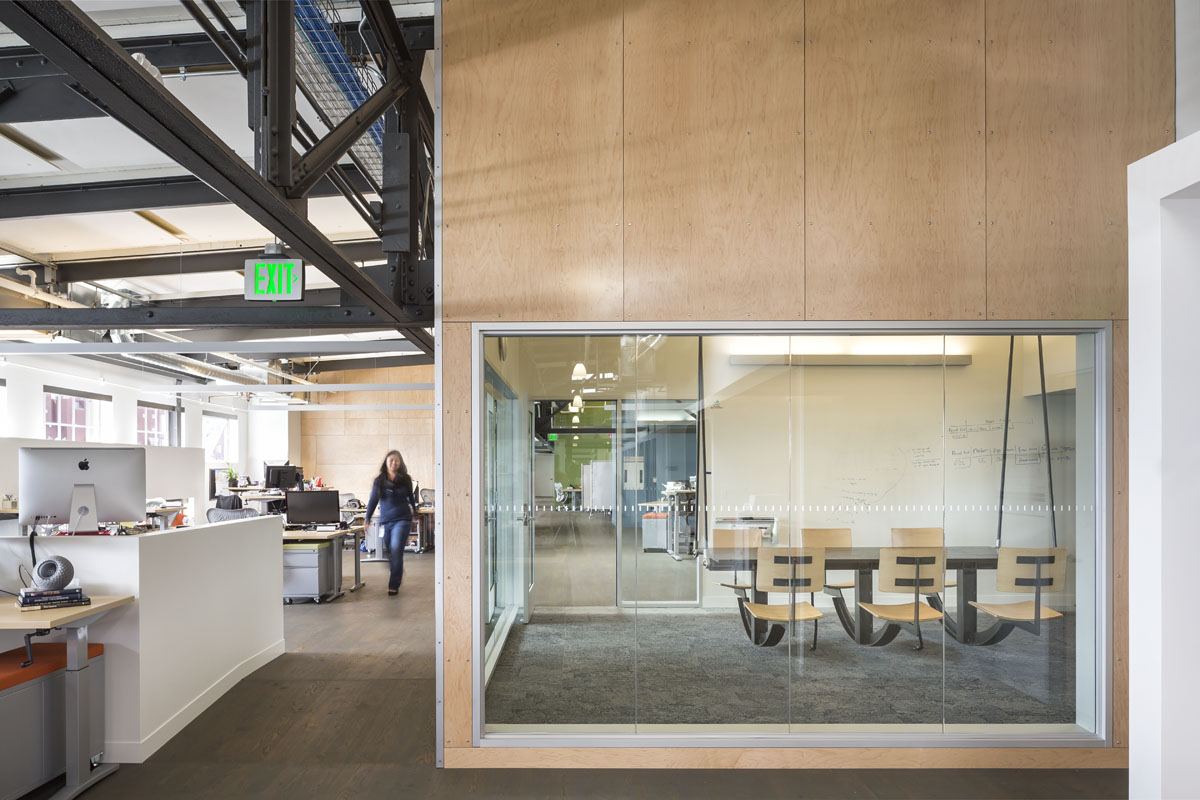 Then there’s the desk, a Lundberg custom piece and Autodesk favorite, with a steel frame and six wooden seats hanging from the ceiling of the conference room. Autodesk had asked for something ‘emblematic of collaborative use,’ and in a tongue-in-cheek response, he built a suspended conference table that, depending on how well its inhabitants cooperate, will swing. “We honestly didn’t think they were going to go for it,” says Lundberg. “You gotta be careful what you show clients, they might actually like it.” 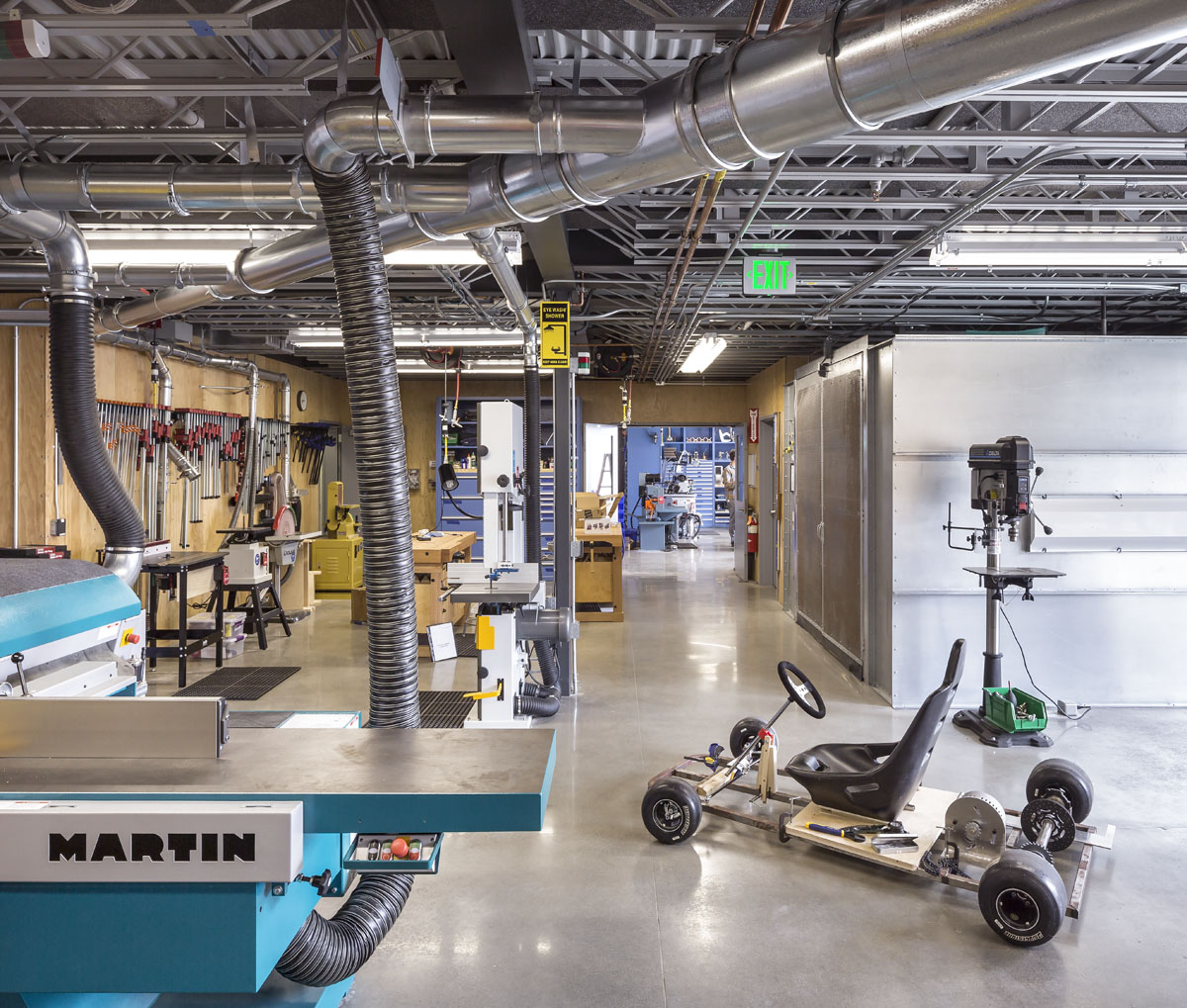 The wood shop, with its plywood-panelled walls. 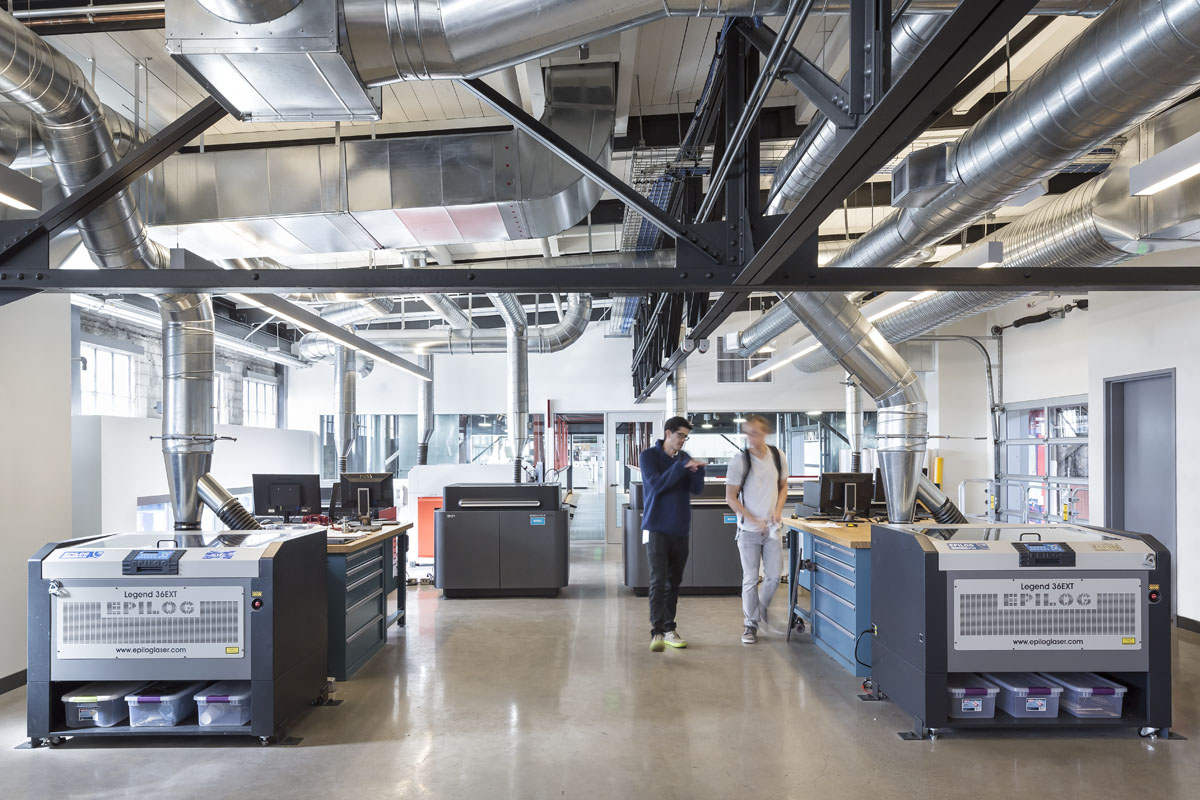 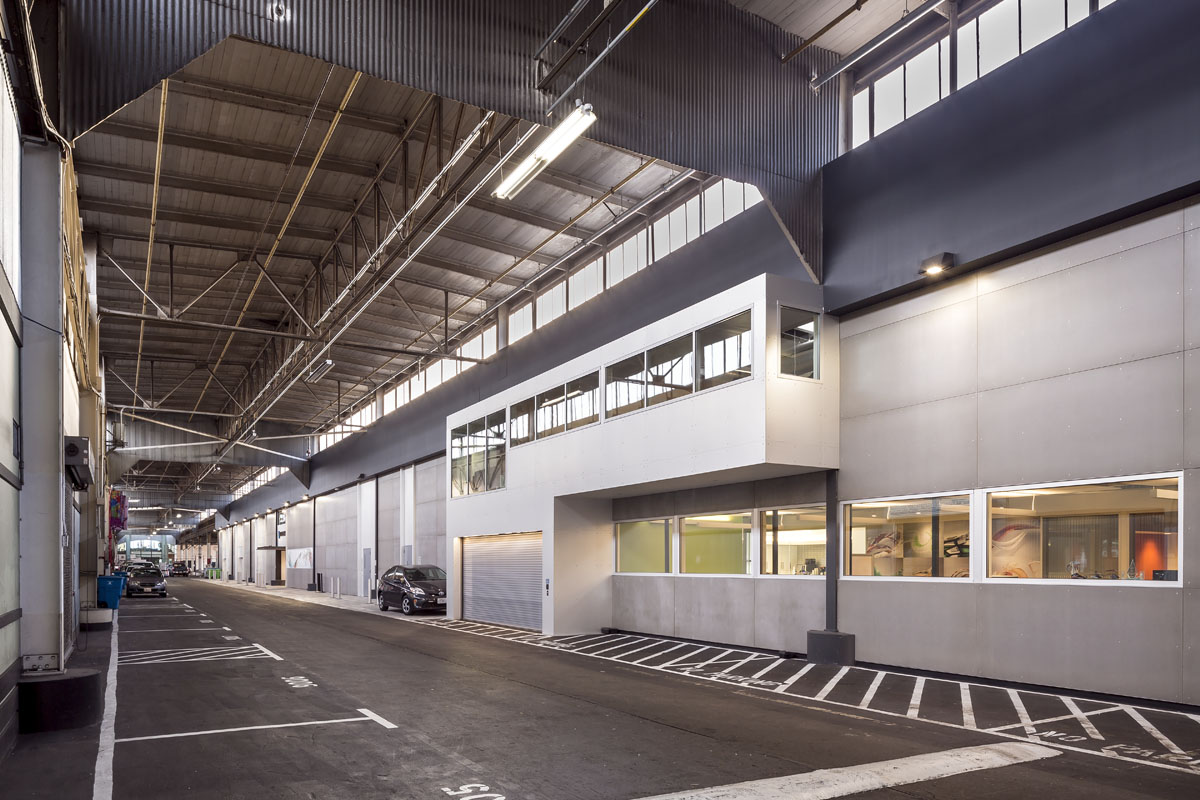 Lundberg inserted a drive aisle into the pier (above), and a facade of geoboard and aluminum panels (below). 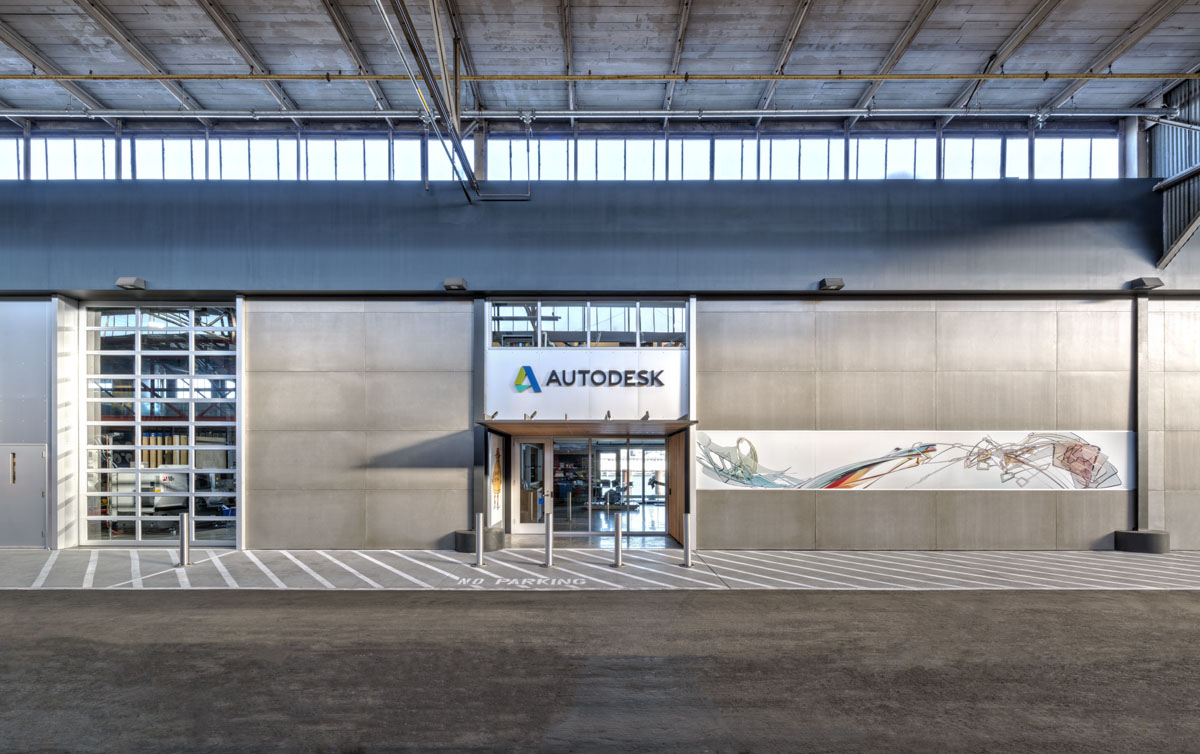