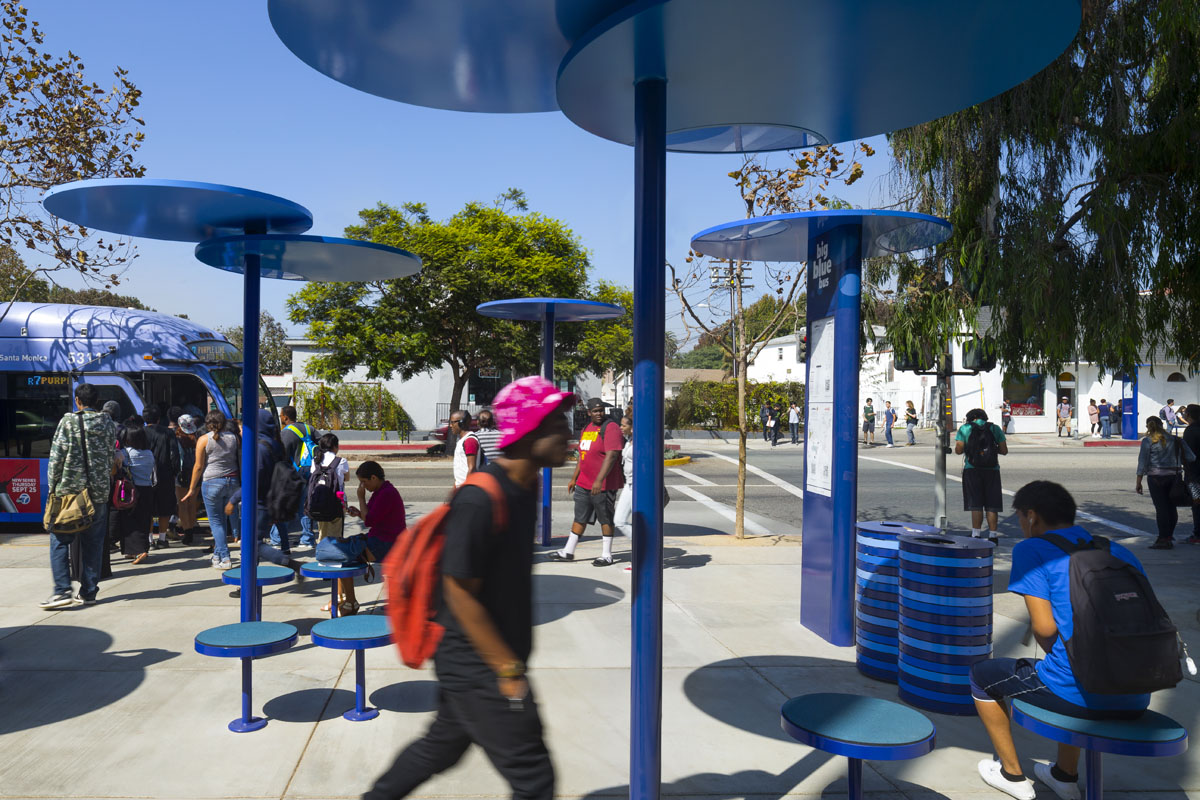 Even though the design of Santa Monica’s bus stops seems simple, with their circular blue canopies, the planning is far from rudimentary. The layout of each stop has subtle cues, such as the signature post that also serves as a marker for the buses to stop at.

Let’s face it—taking the bus isn’t fun. Uncomfortable seats at bus stops are followed by uncomfortable seats on buses, which are perceived as the lowest on the totem pole of public transport. How to make it an attractive option?

The City of Santa Monica recently tasked Lorcan O’Herlihy Architects (LOHA) with finding a solution, asking the firm to design 300 iconic and recognizable bus stops across the city. The answer was simple: Make it basic, and make it cool. And blue, apparently. LOHA’s royally hued reinterpretation, with signage designed by Bruce Mau, is set up as a kit of parts—a series of “uni-strut” posts that support canopies designed to block the sun during peak travel times.

“Santa Monica is known as a progressive city, and this new form of bus stop engages with that culture,” says principal architect Lorcan O’Herlihy. The configuration of each stop is determined by rider volume, solar orientation, and proximity to underground utility mains and businesses along the street. The canopies also hide small solar panels, which power the bus readout and LED lighting. 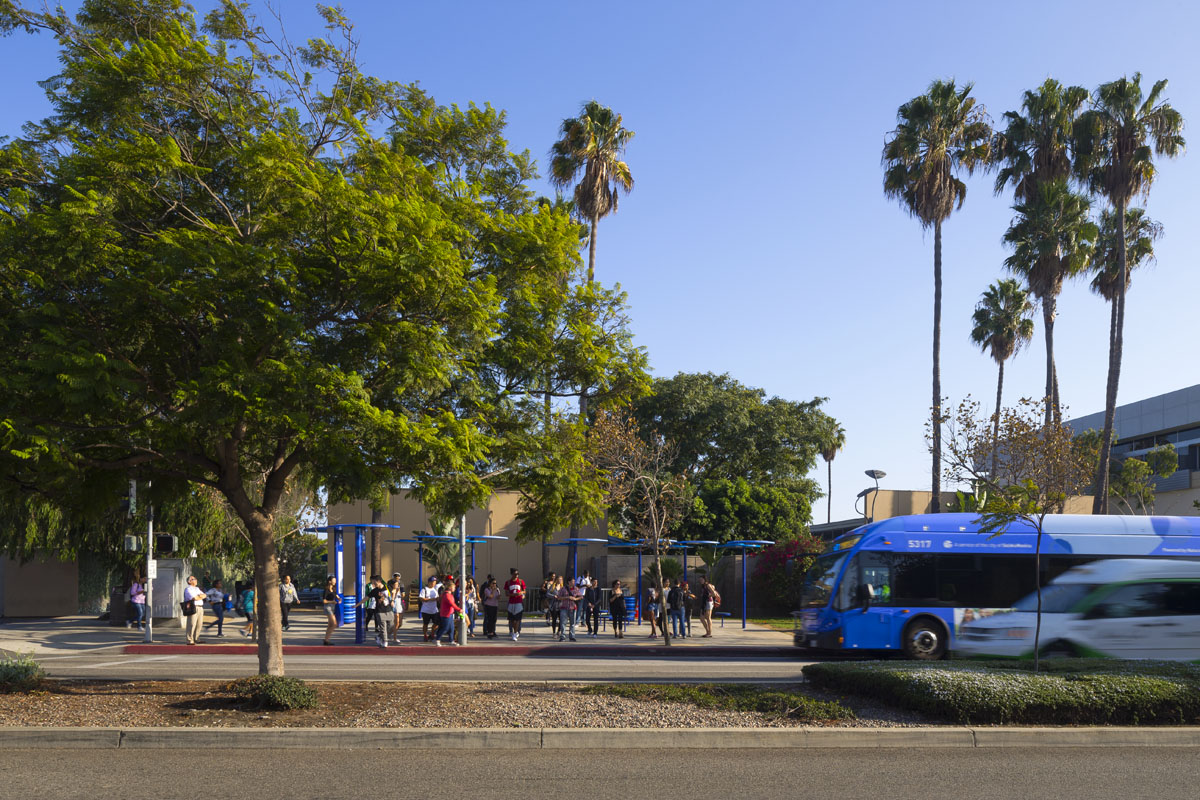 The first bus stops are part of a multi-phase rollout across the city.

About 150 of the stops—called the Big Blue Bus Stops—have been placed across Santa Monica, the first set of a multi-phase rollout. And though they’re enormously successful as icons, response has been a bit mixed—the canopies don’t always block out all the shade, and the seating is somewhat limited. Plans to modify the design for the next phases have already been made.

Clearly, the bus stops are a bold first step. “Many elements of our public infrastructure are overdue for reconsideration from a design standpoint,” O’Herlihy says. “It’s important to ask how these objects in our landscape (that we’ve taken for granted for decades) may be developed to accommodate context-specific needs and new technologies.” 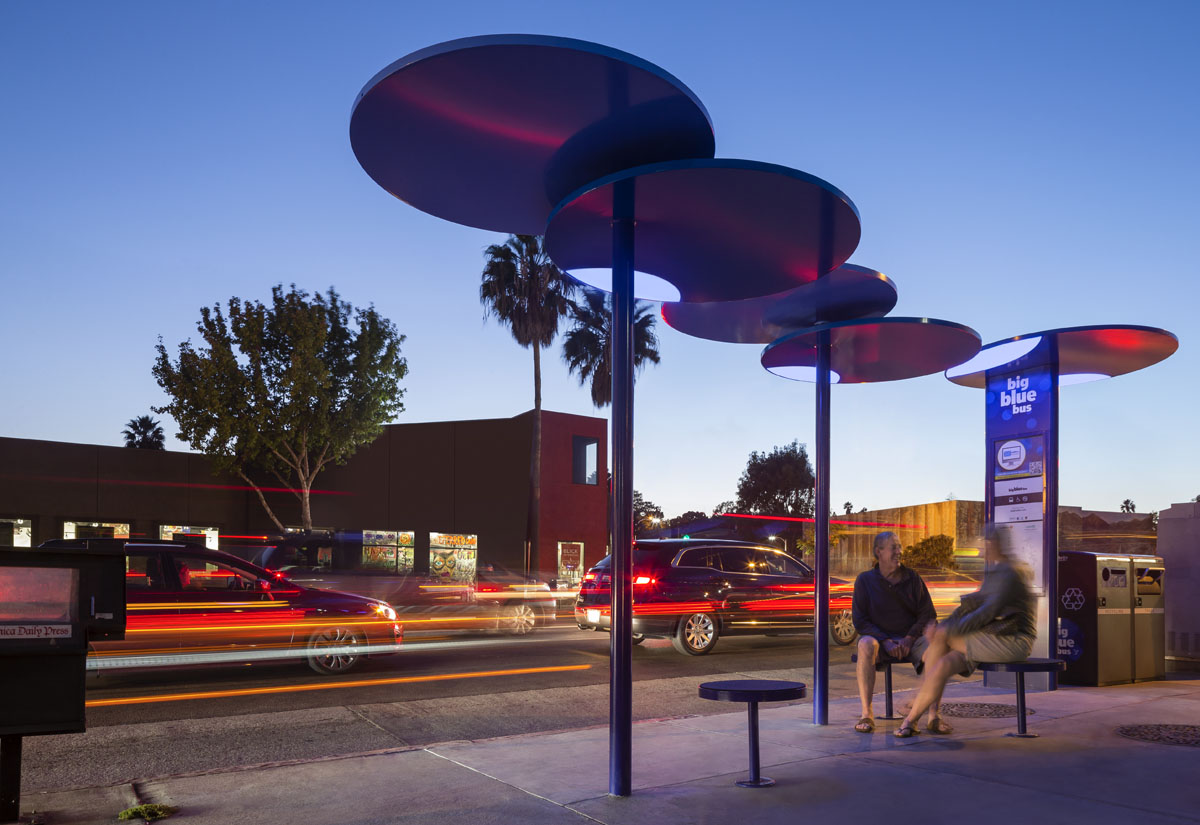 Bruce Mau designed the signage of the bus stop system.