A salute to those special places—some humble, some utterly utilitarian—that give a city its unique personality and collective soul.

The six places and objects shown in the following pages are urban amenities of a particular kind, but really they’re much more than that. These are the distinct features in the landscape that give a city its unique character. Every city has them. They can be supremely useful (the parkettes in Toronto, Pike Place Market in Seattle, Washington, D.C.’s fabulous subway stations) or gloriously idiosyncratic (the hidden staircases in Los Angeles, Pittsburgh’s charming Inclines, the incongruous gas lamps of sunny San Diego). All of them, however, play a beloved civic role that transcends their mere function, lending a kind of quiet poetry to daily life, grace notes to the grind. We invited six writers and designers, one from each city, to reflect on these special characters in the urban landscape. 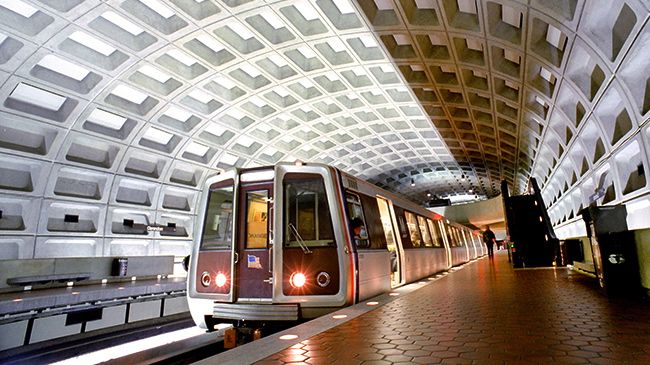 Washington has the most impressive metro stations I’ve ever seen. Firstly, they’re gigantic. Then there’s the design, with those vaulted ceilings, which remind me of the Pantheon, in Rome, but with the lighting reversed. Here, the light mainly comes from below, along the edges of the platform. The dramatic lighting makes me think of Hugh Ferriss’s renderings from the 1920s. There are also lights linked to the arrival of the train, which was probably wildly futuristic in the 1970s, but feels futuristic even today. Great design has a long life.

But that’s the funny thing about timelessness. When you look at photographs from the 1960s of New York City’s Seagram Building, it looks just as fresh, but the cars parked in front look so different. This is also true for the Washington Metro. The stations still look great, but the current fleet of trains is dated. When we redesigned the trains, we tried to make things simpler, but also timeless. There’s a different attitude towards public space in D.C. People here are kinder towards public equipment. And we also have to live up to that monumental station architecture.

Masamichi Udagawa is one of the founders of Antenna Design, which designed the 7000 Series Railcar for the Washington, D.C. Metro. 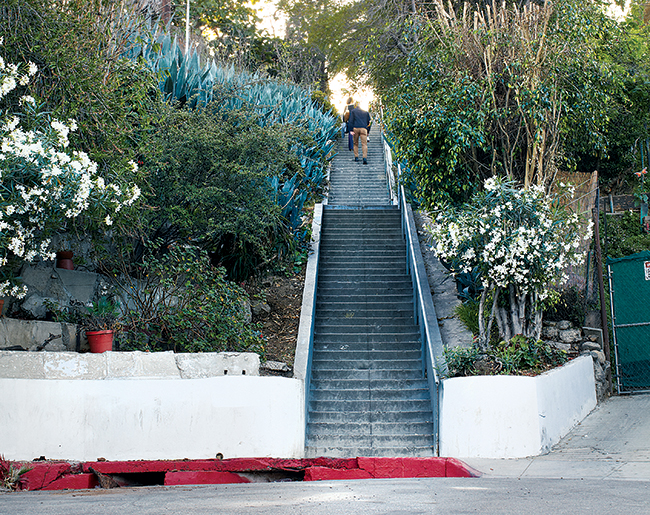 Los Angeles’ Secret Stairs are so secret that even with Charles Fleming’s eponymous guidebook we get lost just trying to find the ones in Pasadena. Of course, they’ve lain dormant since the 1920s, when pedestrians used them to get to L.A.’s streetcars and trolleys. But no, just beyond that SUV and driveway and garbage cans… stairs!

Obscured by jungle-like growth, a long stone staircase dappled in shadow and light rises up the hill, opening into a small portal of blue sky. It feels like our own personal wormhole, or some other mode of time travel. Literally. We find ourselves climbing through 1960s ticky-tacky homes, past a grand, eighteenth-century-style Spanish mansion, to a twenty-first-century quasi-ocean liner, all white and steel and modern.

The stairs go up and down as we traverse streets whose homes in turn have their own stairs. Glazed-eyed from trying to map a trail in this Escher drawing, at one point we start to follow an elderly Asian couple climbing a staircase and then stop when we see them open their front door, turn off their alarm, and enter their own home. Whoops!

By 10 a.m., though, the relative Saturday morning stillness is broken. The secret is apparently out. Our private magical time-space escalator has become a superhighway of singles and couples and ladies in safari hats, all clutching Fleming’s guidebook.

It’s just as well. We have been walking for an hour. I check my iPhone for the quickest route back and I swear, the streets appear ghostly and in old movie soft-focus, an effect I have never seen before. Our blue dot hovers between Glenullen and Tamarac, street names that sound like very old Scotches. Or like the Brigadoon that just vanished. But with a wish, I am sure it will reappear again, in the mists, tomorrow.

Sandra Tsing Loh is a contributing editor to the Atlantic. 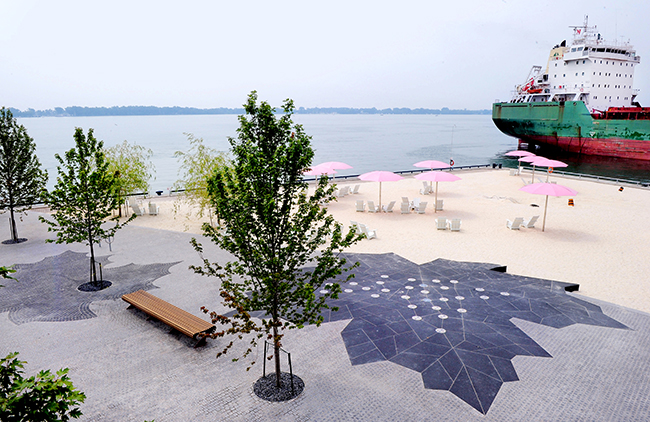 From the street, Toronto’s Sugar Beach is hard to discern. But for the pink plastic umbrellas, the impossible whiteness of the carefully imported sand, and the languid assembly of half-naked sunbathers, it would be another invisible corner of a working harbor, passed by, overlooked, and ignored on our way to more important things.

With its cringe-worthy colonial history and muddy provincial past, Toronto is not a city accustomed to the sweet pleasures of inhabitable public space and, in this case, of incon- gruity. Now its denizens bask in it. The tiny beach, which faces a huge sugar refinery, turns visitors into audience members in the theater of industry unfolding across the slip.

Massive ocean-going ships dwarf children playing in the fountains and climbing the red-and-white-striped “candy rocks” that surround the sandy surfaces. Until Sugar Beach, hard hats were more likely to be seen down here than bathing suits. In a city that has long taken pride in the paved indifference of its public realm, Sugar Beach is all the more remarkable. No benches on Toronto streets (they would only make us loiterers). Prettiness must also be distrusted, elegance eschewed.

Tucked away in an obscure corner of Toronto’s fast-changing working waterfront, Sugar Beach is a brilliant manifestation of the city’s sudden craving for urbanity. Small pocket parks—they’re called parkettes here— can be found throughout the downtown core. But Sugar Beach raises the stakes, replacing civic rectitude with hedonistic individualism. Little wonder Torontonians find it irresistible. It speaks of human desire. It knows the difference between what we want and what we think we should want. It’s not there to make us better citizens or prove a point; its rationale is the logic of pleasure. It’s neither good for us nor bad; it exists to be enjoyed.

Christopher Hume is the architecture critic for the Toronto Star. 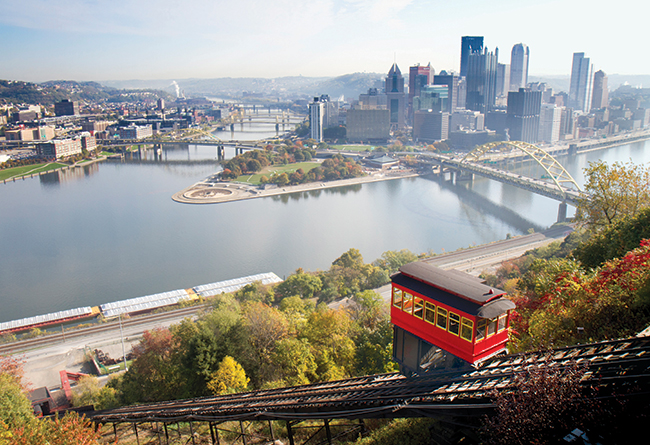 Across from downtown Pittsburgh, Mount Washington rises sharply to a plateau. It’s a formidable redoubt, this escarpment separating the riverbank below, once site of the waterfront factories and warehouses that helped make Pittsburgh prosperous, and the casual boulevard above, with its thriving bars and restaurants offering spectacular views back to the city.

Look carefully and notice two sets of cable cars negotiating this dramatic hillside. They service residents of the suburbs above going about their daily lives and are today among Pittsburgh’s most celebrated attractions. The Inclines miraculously survived from the industrial era, when the city could boast of more than a dozen such machines. Known as the Monongahela and the Duquesne, and dating from the 1870s, each consists of a double run of track and a contiguous cable, with one car ascending as its twin descends.

Entry is through chalet-like structures at both the base and top of each Incline; only the upper station is manned by an operator in a dedicated control box. The Monongahela cars are stepped in section with three small interior tiers; the red Duquesne cars are consolidated volumes, like miniature railway carriages. You climb aboard and the car shunts gently away from its berth. At night, the Monongahela track is marked by blue lights, the Duquesne by red.

These funiculars are little capillary machines, glowworms, kinetic charm bracelets. They slowly reveal a panorama of a city built on steel, aluminum, and glass; Pittsburgh and its rivers appear for your vertiginous viewing pleasure. There’s Johnson/Burgee’s pointy glass confection for PPG dating from 1984. Over there is Harrison & Abramovitz’s powerful Cor-Ten tower for U.S. Steel (1971), now capped by a UPMC sign. Should the Steelers or Pirates be playing in their new stadia, the entire metropolis is illuminated. Expect fireworks!

Raymund Ryan is a curator at the Heinz Architectural Center at the Carnegie Museum of Art, in Pittsburgh. 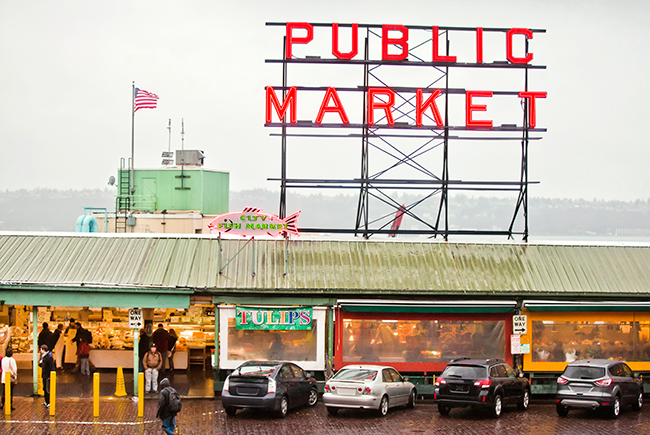 The thrumming heart of Seattle is a labyrinthine, multi-chambered, ramshackle organ that has survived repeated attacks by the diseases of urban renewal and gentrification. A cacophonous warren on stilts, it’s terraced into the cliffs above Puget Sound, a gateway from Seattle’s shores into the city’s downtown.

“The Market” is something out of a previous century: fishmongers, buskers, small farmers, immigrant flower vendors, and a host of merchants hawking everything from belt buckles and kitsch to intricate glass sculptures invite visitors from all over the world to bargain, browse, or enjoy the spectacle. It was the inspiration for early works of the celebrated artist Mark Tobey; the site of the world’s first Starbucks; home to legendary fish-tossing performers; and has welcomed the artists, writers, and engineers who have rented its loft spaces to launch dreams, art movements, and world-changing software.

Founded in 1907 by a Seattle city councilman outraged at the price of onions, Pike Place Market was conceived as a space for farmers and consumers to trade without middlemen. It grew rapidly and with no discernible plan into a sprawling array of businesses, craftspeople, farmers, street performers, and musicians. Some ten million visitors traipse through the maze every year.

But the numbers don’t begin to tell the Market’s real story. For that, you have to be there, letting its sounds and smells wash over you while you wander in and out of the bewildering array of shops; hallways; ramps; staircases; and odd, dark passages. You haven’t lived until you’ve gotten hopelessly lost in its depths, wondering if you’ll ever escape—or ever want to.

Fred Moody is the author of Seattle and the Demons of Ambition: A Love Story. 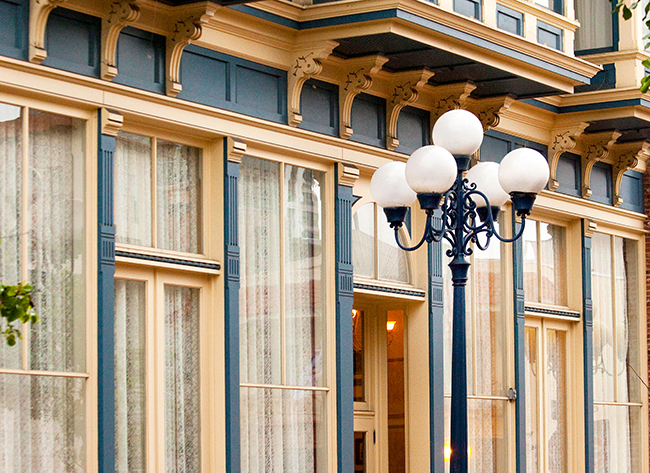 Many have a myopic view that San Diego is simply a beach town. There is so much more to it. The Gaslamp Quarter is the historic heart of our city and a wonderful representation of mid-1800s San Diego architecture. As a unique fixture from this era, the gas lamps are a statement to the history of place. However, I do not think the district is the sole example of how our city is “growing up.” We’ve become a contemporary outpost for so many diverse attitudes, research projects, and technological innovations. There are many distinct neighborhoods, each expressing a specific cultural iconography. The energy of the reimagined Gaslamp Quarter has spawned fresh expressions of urbanism in the adjacent East Village—where our studio was located for years—and Barrio Logan, where a rich arts scene is emerging. Our studio is beginning design work on a new boutique hotel in the district with the developer SD Malkin, which has developed in the Gaslamp Quarter for 23 years. I’d like to think projects like this can be a catalyst for change, and the Gaslamp Quarter is ripe for this, as so many historic urban neighborhoods are. It’s primed for an influx of arts, food, theater, and culture.