An interactive pavilion at the Sochi Olympic Park acts as an architectural machine for selfie-taking.

Selfies are quick, viral, intrisically immediate. Architecture, then, seems an unlikely vehicle for transmitting the stuff of the genre, namely snapshots of duck-faced teens or preening celebrities. A new pavilion at the Sochi Olympic Park, however, argues otherwise. Designed by London-based architect Asif Khan, the MegaFaces project calls up the grandeur of Mount Rushmore or Stalinist propaganda and renders it in the service of Olympic tourists. With MegaFaces, every wink, frown, smile, twitch, furrow—and yes, duck face—is captured and reproduced gigantically.

The cube-shaped structure frames an 8-meter high facade that reproduces the mugs of standees using an innovative kinetic wall. The facade, which was created in collaboration with Basel-based engineers iart, incorporates technology like a fast 3-D scanning process able to produce a fully-formed portrait magnified 3,500 times over. Visitors stare into a face-scanner that records the grooves of their unique visages then relays this information to the screen’s 11,000 actuators. Seconds later, their likenesses are displayed on the side of the billboard-like building.

Valentin Spiess, CEO at iart, explains that the difficulty lay in retaining a simplicity and efficiency in employing this highly advanced technology. “The challenge in our case was the development of a system that would meet Asif’s requirements of the project in relation to speed, usability and image quality. The process will be as fast and simple as using a commercial photo booth,” he says.

Khan’s architecture has always veered towards the dynamic and responsive. The studio’s first project, the humble little West Beach Cafe, had a hinged facade that opened onto an oceanside vista. More recently, at the London Olympics in 2012, the Coca-Cola Beat Box Pavilion (featured on the cover of our October 2013 issue) beautifully assembled a sensory experience of architecture, music and sports. 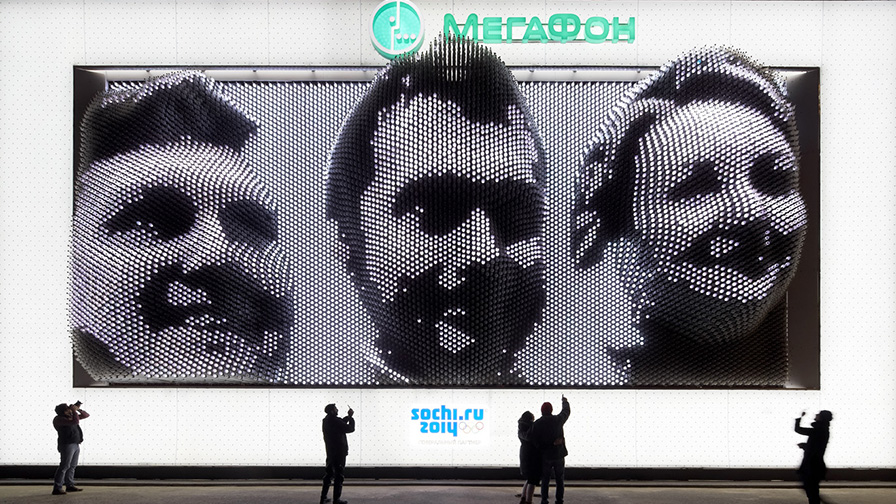 For MegaFaces, Khan tapped into the human proclivity for self-portraiture. “For thousands of years people have used portraiture to record their history on the landscape, buildings and through public art. I’m inspired by the way the world is changing around us and how architecture can respond to it,” the architect explains.

However, it’s Khan’s ability to employ a fairly futuristic digital technology to create something that is sentient and lifelike that makes his work stand out. “My instinct was to try and harness that immediacy in the form of sculpture; to turn the everyday moment into something epic,” he says. “I’ve been thinking of this as a kind of digital platform to express emotion, at the scale of architecture.”