The poetic form of the Bahá’i Temple of South America is a triumph of engineering and material innovation. 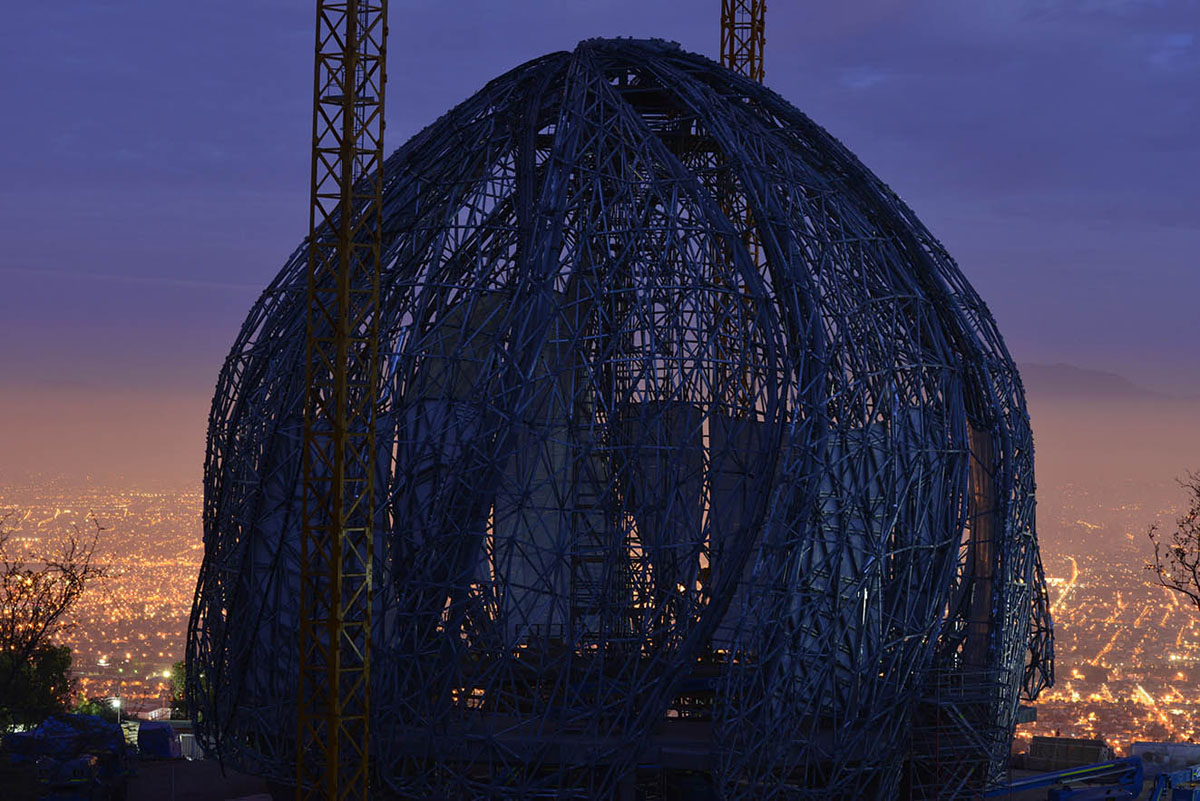 It’s been over a decade since the architects of South America’s first Baha’i Temple sketched out its design. “The shape never changed from what it was on the computer in 2003,” says Doron Meinhard, project manager and associate-in-charge of Hariri Pontarini Architects.

For the last few years, in the Andean foothills just outside Santiago, Chile, a mysterious orb-like structure has been slowly rising under construction cranes. The new Bahá’i Temple of South America will be the first of its kind on the continent when it opens in 2016. It has been a historic journey for the Bahá’i faith in this part of the world—Bahá’i first arrived in Chile in 1919—and a patient journey for the architects, engineers, and builders who have brought the temple to life through a decade-long process of innovation.

Designed by Canadian architect Siamak Hariri and his Toronto-based firm Hariri Pontarini Architects, the temple takes its inspiration from the Bahá’i conception of light as a symbol of unity. In addition, following Bahá’i scripture, the building was required to have nine entrances—welcoming all who come from all directions—and a dome to let in light.

Going in an entirely unexpected direction, the architects created a form made up of nine “sails” that twist, bend, and curve as they reach up to join an “oculus” at the apex. In the harsh Andean terrain, the building appears to billow and coil lightly as it emerges from its heavy concrete base. The architectural language —achieved in partnership with U.S. engineering firm Simpson Gumpertz & Heger (SGH) and Germany-based Gartner Steel and Glass GmbH—is at once high-tech and organic, combining digital design and fabrication technologies with the personal sensitivity of craft and the rough imperfections of nature. 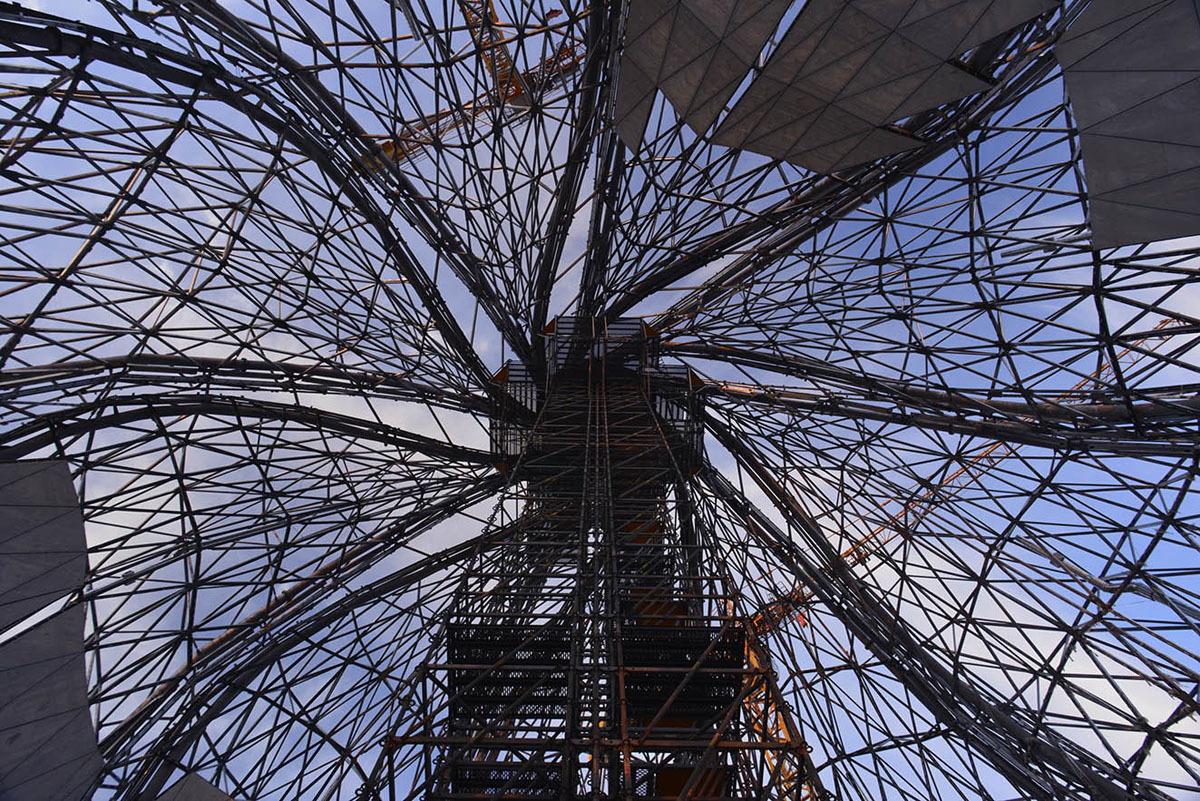 The engineering firms were key to keeping the integrity of the architectural form. Even in the final stages, Gartner Steel and Glass came up with a new approach that eliminated the sub-frame, saving over $850,000.

“We wanted the building to be about light, but with a more special, ancient quality to it,” says project manager and associate-in-charge Doron Meinhard. “We knew we had to do something special because this building was intended to be a 1,000-year project,” he adds. The “sails” are the embodiment of this approach, maintaining the organic character of the original competition-winning design. It could have been a simplified structural and cladding solution made with off-the-shelf components, but the architects and engineers allowed complexity to thrive—expressed in water jet-cut cast glass on the exterior and translucent marble panels on the interior. These two translucent layers follow an intricately webbed space frame structure connected with custom nodes. “These nodes are the DNA of the project,” says Meinhard. They allow the glass and marble to achieve a high tolerance of connection right up to the space frame, following the shape closely without gaps. The only concession to simplification was making each “sail” identical and repeating it nine times. “A repetition factor of nine was good enough,” says Meinhard. “We wanted to keep the standards very high.” 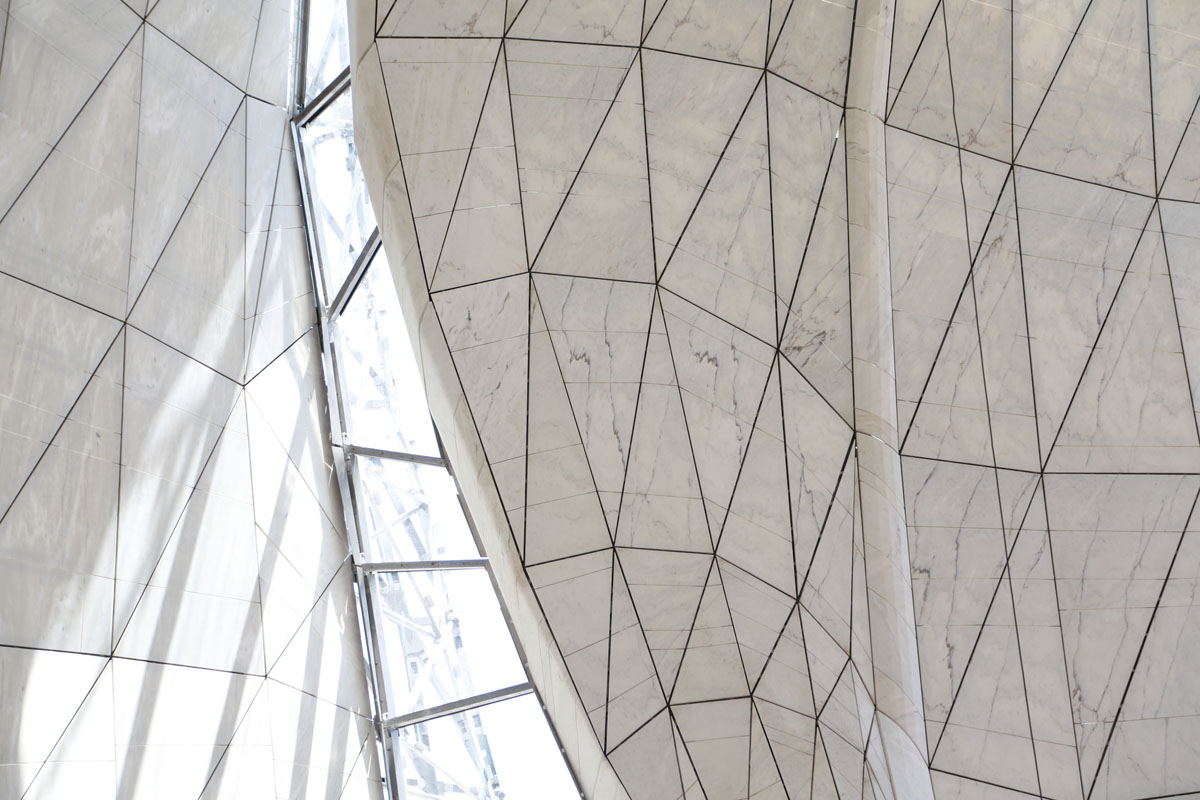 The interior surface of the nine “sails” (above) is marble, the exterior is cast glass developed by artist Jeff Goodman. He took great care, using lab-grade borosilicate to avoid any thermal stress. SGH then put the material through rigorous testing: subjecting it to freeze and thaw cycles, and submerging it fully in water. Then, because the 2,000 panels on each of the sails are all unique, the seismic load on every single one had to be tested.

The design team also stayed away from typical annealed or plate glass, going instead for something that looked and felt more like stone, but still had the visual properties of glass. This ultimately led to a four-year collaborative research process with Canadian glass artist Jeff Goodman. Known for his work with ornate blown glass, Goodman created the original prototype for the custom 1.5-inch-thick patterned glass panels that clad the building. The patterning takes its cues from the work of the American artist Mark Tobey, specifically his “white writing” or “structured light” paintings inspired by Chinese calligraphy and his conversion to the Bahá’i faith early in his career. But there is more to the glass than just the way it looks. Significant temperature swings every day of the year posed expansion and contraction challenges to using typical glass. “We did a lot of testing on the glass,” says Frank Kan, principal at SGH. “This type of cast glass, also known as Pyrex, has less thermal expansion.”

The whole system was rationalized using CATIA software, but in a way that stayed true to the concept. The final pieces of cladding are now being hoisted, positioned, and fixed into place for a building that defies rational thought and veers into the realm of the emotional.