What to Make of Steven Holl’s “Urban Hopes”?

A monograph dedicated to Steven Holl’s large-scale projects in China points to a new 21st-century urbanism.

Steven Holl is the rare architect whose concepts are equally known as his buildings. Chalk that up to Holl’s prolific output, in both buildings and monographs, and his knack for branding his ideas. Urban Hopes: Made in China (Lars Müller, 2014), a condensed reader on Holl’s latest work in China, is the latest in a stream of small books that have continually repackaged the architect’s growing body of work.

Anchoring and Intertwining appeared in 1996 and expounded on architectural themes and spatial notions only partially evinced by his work up until that time. In both, the buildings were few and far between, scattered between pages imprinted with “paper architecture,” the primary outlet for Holl’s creative energies in the prior decades since his move to New York in 1976. These and more titles were followed up by Parallax in 2000, a blend of philosophical, scientific, and poetic references that invest the architecture with the aura of the Gesamtkunstwerk. Holl’s idea of “porosity” made its debut here, if prematurely, where it was applied rather literally to Simmons Hall at MIT and its sponge-like facade. It wasn’t until a few years later, when the architect first got his feet wet in China, that the concept would be baptised as a core tenet of 21st-century urban design. 2009’s Urbanisms advances as much, while further recapitulating the big ideas of the previous book installments.

The large-scale visions Urbanisms presented were still tentative, as nearly all were unbuilt or, for those sited in China, under construction. With Urban Hopes, the ratio of built-to-unbuilt projects is skewed towards the former. The volume centers around five urban complexes planned for different cities all over China, three of which have been since completed and are open to the public. According to Holl, they exemplify five points of the short, self-styled “manifesto” that opens the book and which could be titled Towards a Geopolitical Architecture. The homology to Le Corbusier’s founding five points of modernism is, of course, intended, but perhaps not unfounded. The ghost of Corbu has long haunted Holl’s architecture. 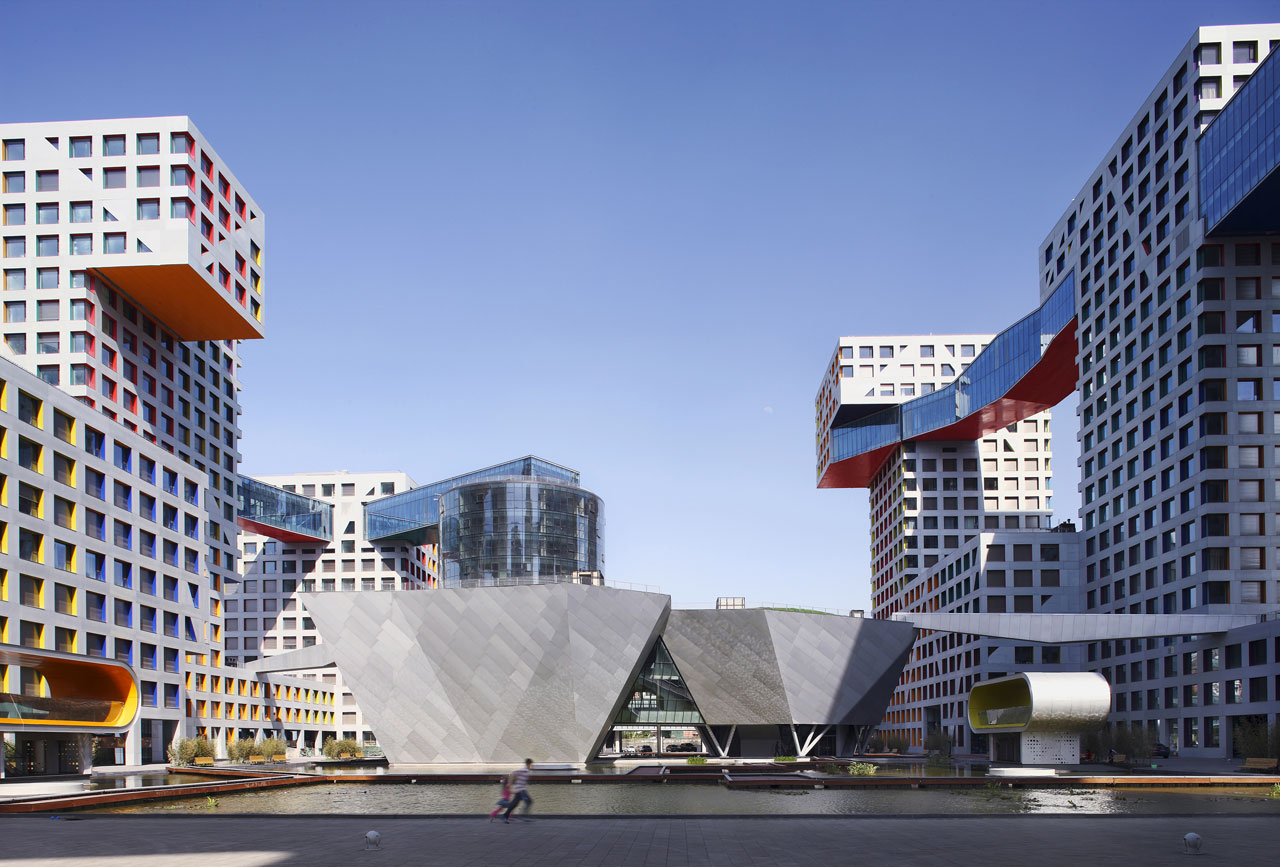 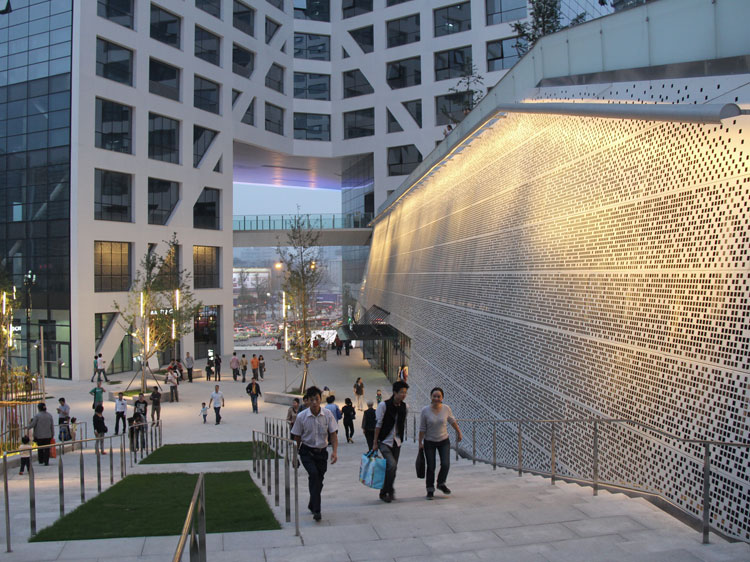 The central urban space at the Sliced Porosity Block in Chengdu, 2012.

Nevertheless, each point adequately captures the novelties of Holl’s Chinese work, even if it seems that he hurried the muse with the nomenclature this time round. The ideas come off as rather bland; categories such as “Space Formation,” “SuperGreen & Urban,” and, yes, “Idea” are simultaneously opaque and commonplace. The first and the fourth points, “Hybrid Buildings” and “Anchoring,” are more evocative and come across most forcefully in the built work, as at the Linked Hybrid in Beijing and the Horizontal Skyscraper in Shenzhen. Both, along with the striking Sliced Porosity Block in Chengdu, were built in the last five years and easily rank among the best new buildings in China. Together, they represent some of the most adventurous and daring architectural projects of the young century.

It’s ultimately redeeming for Holl that the germ of these projects can be found in his erstwhile “utopian” and speculative plans of the late 80s. The irony, at least, isn’t lost on him: “The exploration of strategies to counter sprawl at the periphery of cities and the formation of spaces rather than objects, were primary aims of our ‘Edge of a City’ projects made between 1986 and 1990.” The ideas were long in place, but their implementation evaded Holl for 20 odd years. 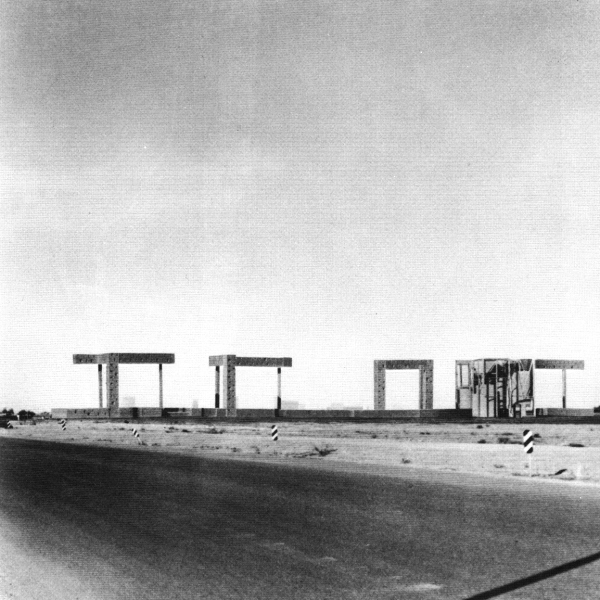 Holl’s speculative proposal for large architectural assemblages located at the edges of cities that worked to counter sprawl. 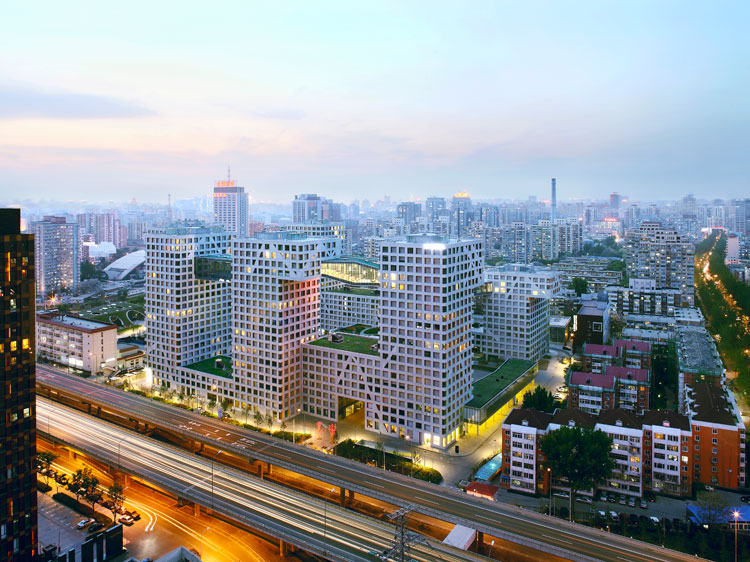 The Linked Hybrid, seen from a distance. Note the sky bridges, lifted from the “Edge of a City” concept, which find their realization here.

China’s building boom and the country’s rising class of elites gave Holl the change to dig out his youthful proposals and update them for a new millennium. The forms are familiar—“boxy” still prevails—but the “super green” gizmos are new. These include subterranean geothermal wells used to heat and cool the complexes, recycled water systems, PV roof panels, and more than an ample amount of green lawning. Just as important as a building’s performativity, Holl says, is its ability to meaningfully delineate and create urban space. “All of these projects,” he explains, “share urban ambitions: the ideals of pedestrian orientation, public open space formation, juxtaposition and variety of urban programs and super green architecture.”

Holl boils this soup down into the all-too-suggestive term of “social condenser,” a concept well familiar to students of architecture. Originally coined by the Soviet Constructivists to describe the sociological thrust underpinning their collectivist housing blocks, the phrase has been co-opted by architects ever since. What they, and Holl, really mean isn’t a radical restructuring of housing types, but instead a spatial model that’s aspiringly urban. This is clearly reflected in the plan and section of the Sliced Porosity Block. The complex, in the heart of Chengdu, consists of five irregularly shaped, interconnected towers clustered around a large central square, whose section reveals three distinct plazas. A shopping mall sits directly beneath one of the plazas and can be glimpsed through a shallow glass pond. Shops are located at the periphery, while offices and apartments loom overhead. Three art installations—one by Holl, another by Ai Wei Wei, and the last by the late Lebbeus Woods—are embedded in the crevices and leftover spaces between the towers. The act of walking through the “Block,” ascending its heights, crisscrossing its public spaces, and descending down into its subterranean mall constitute a real urban experience. Holl might be right in calling it a “city in a city.” (Not coincidentally, a new exhibition under the same name and devoted to Holl’s China works is currently open at the Schindler House in L.A.) 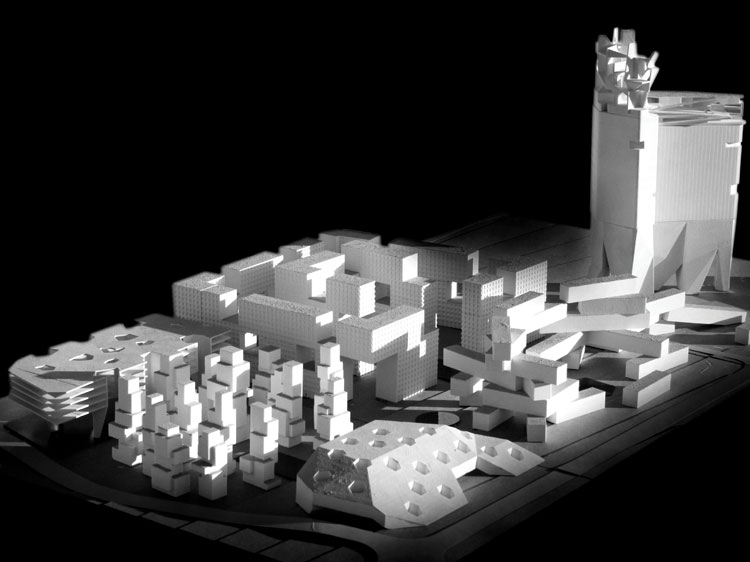 A model for Holl’s “Tropical Porosity Plan” for Dongguan, China.

The remaining two projects explored in the book are harder to pin down. Where Linked Hybrid aspires to the rationalized urbanity of Rockefeller Center, and the Sliced Porosity Block imagines a futurist San Gimignano, these unrealized projects don’t have any clear urban precedents or reference points. The Tianjin Museums, designed for a new city currently under construction at Bohai Bay, breaks from the rectilinearity of Holl’s other China projects to embrace the sculptural. The twin museums, one devoted to ecology and the other to planning, resemble gigantic jigsaw pieces, as designed by Jean Arp. The Tropical Porosity Plan eschews ordering principles for something altogether different. Drafted in 2011 for Dongguan in southern China, this “city” is a Hedjukian collage of types planned for 7,000 people. The fanciful structures are laid out in a seeming haphazard manner, hemmed in only by the site edges. If built, it will be the densest collection of Holl’s architecture anywhere in the world. 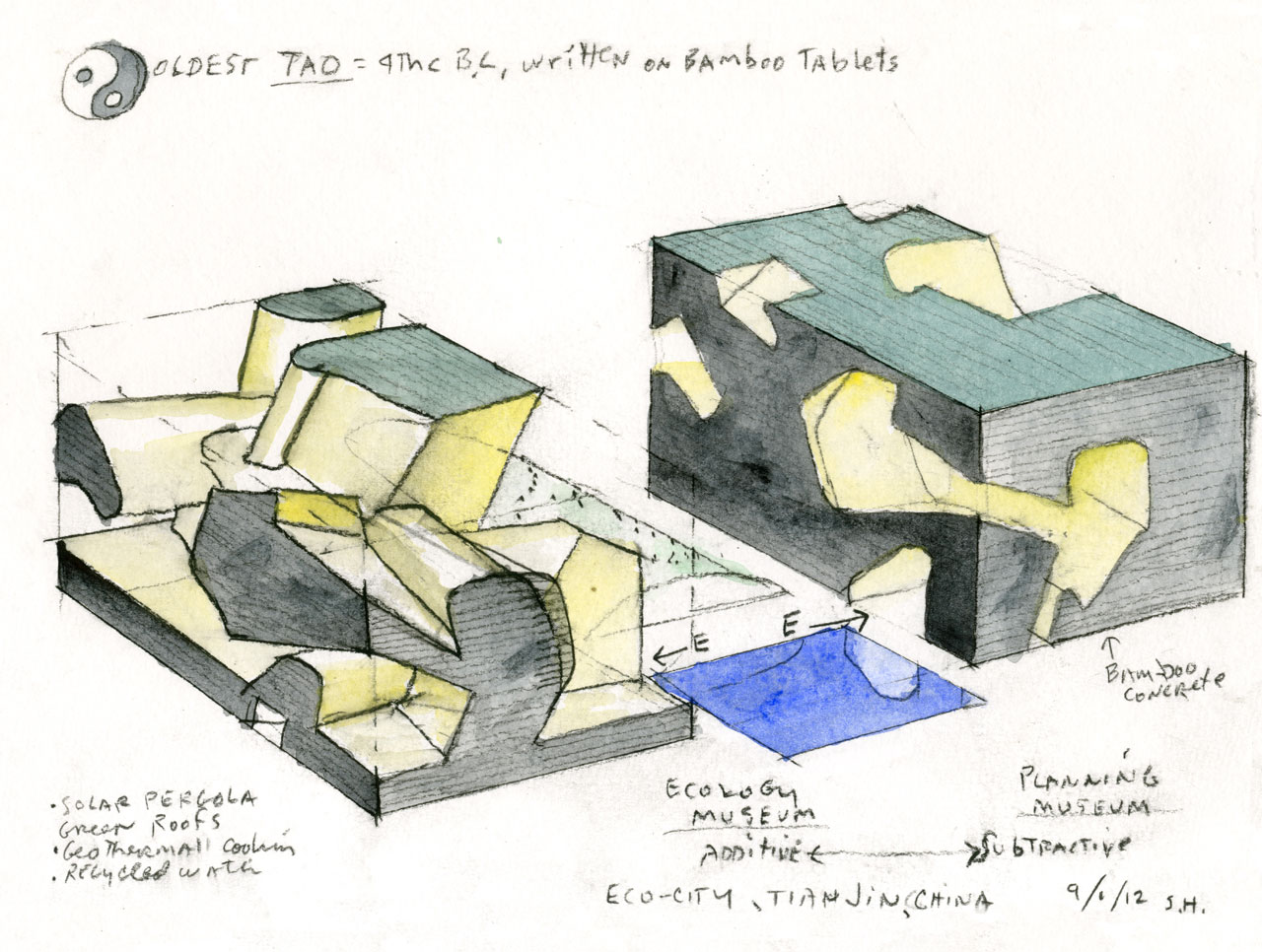 A preparatory watercolor by Holl illustrating the key parti of the Tianjin Museums.

If there is a quibble to be had with the book, it is its insistence on insinuating Holl’s cannon within a heritage of architectural precedents that don’t quite fit. Two essays bracketing either end of the bulk of the study (i.e. the buildings) are superfluous, while diagrams spuriously relate these massive urban complexes to the street layouts of the West Village or the urban compositions of medieval Italian “cities.”

The end result feels forced. That said, an introductory essay about Chinese ink wash paintings and their influence on Holl’s own watercolors brilliantly supplements the photography of the built work. The inclusion of Lebbeus Woods’ “Slow Manifesto,” also, is as touching as it is timely. “The new cities demand architecture that rises from and sinks back into fluidity,” wrote Woods. The urban conditions of the 21st-century will need visionary architectural proposals like Holl’s, or that’s the implied suggestion. For Woods, new technologies and political conditions will produce “architecture drawn as though it were already built—architecture built as though it had never been drawn.”