Storytelling in EGD: The Ancients Started It All

A look at Environmental Graphic Design’s surprisingly long past.

Once upon a time, there was a group of hunters who lived in a cave in France. These hunters lived during the Late Stone Age, which was somewhere around 17,000 BC, give or take. They were very capable hunters and very observant, as well—as good hunters should be if they want to survive. They were also very expressive, leaving behind on the walls of their cave home paintings and drawings of many of the animals they encountered. They drew deers, bears, bulls, birds, and horses as well as stick figures of themselves. Their drawings and paintings tell stories about life in the neighborhood, the drudgery of day-to-day survival, the thrill of victory, and the agony of defeat. 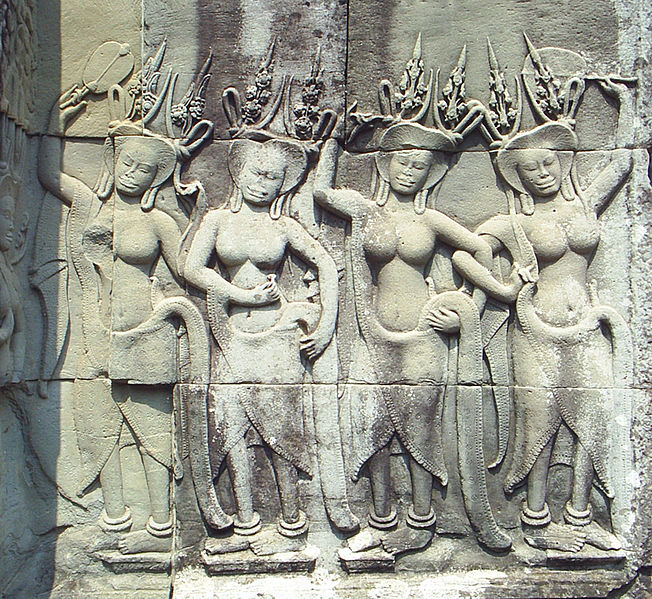 Carvings of devatas on temples at Angkor Wat.

Graphics in the environment continued to develop through the ages. The frieze from the Parthenon, also known as the Elgin Marbles, told stories of conquest, heroic deeds, and triumphant events. The stained glass windows in Christian churches and cathedrals were used to tell stories of religious events, parables, saints, and miracles. Paintings and carvings on the Buddhist temples of Angkor Wat in Cambodia depict the deeds and acts and beliefs of Buddhism. The cities of the Maya, Aztecs, and Inca are filled with carvings and glyphs that tell stories and document history. Trajan’s Column in Rome is an amazing example of storytelling in the round! Examples abound throughout the world. 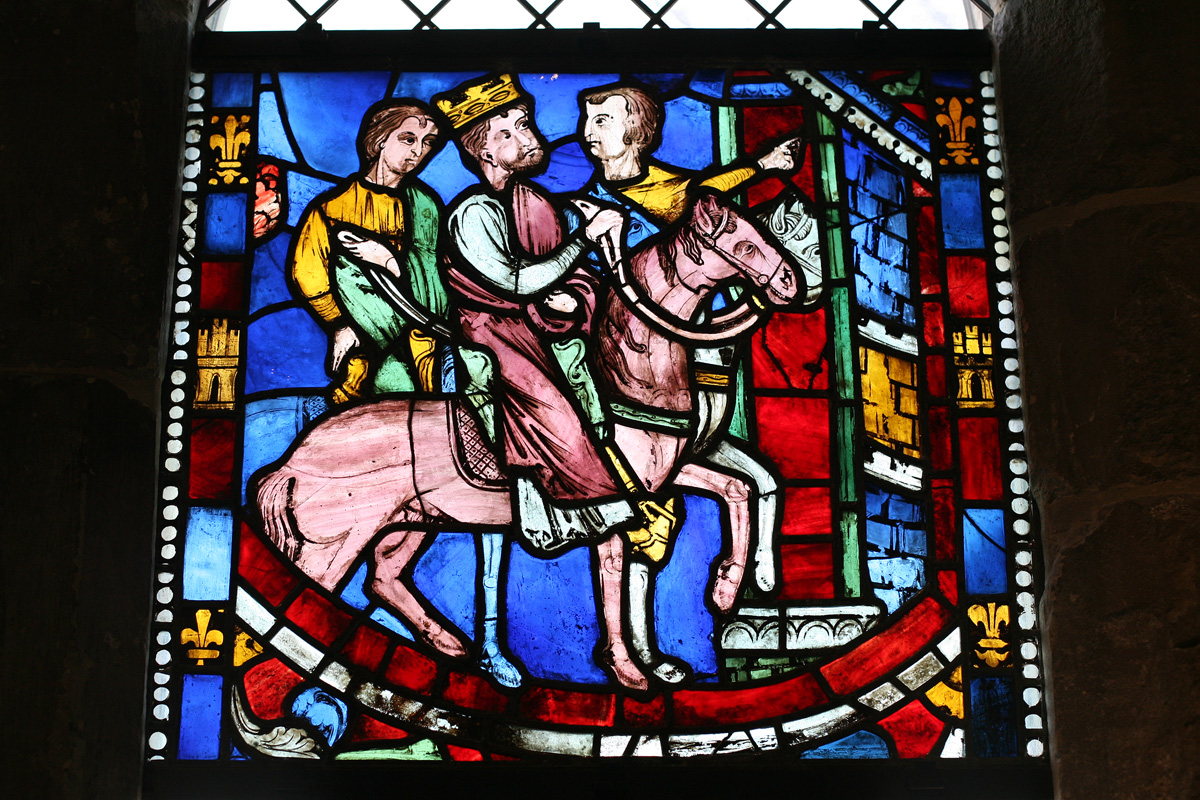 Stained Glass Window. Theodosius Arrives at Ephesus (scene from the Legend of the Seven Sleepers of Ephesus), ca. 1200–1205, Rouen, France.

As technology and learning advanced, storytelling in the public realm changed from pictographic to typographic. Stories were told in greater detail via the written word. We now have museums, outdoor exhibits, computer generated stone carvings, and cast bronze tablets providing an endless supply of stories for public consumption. Along the backroads of the United States, one can find historical markers, roadside installations, and small museums dedicated to the culture, history, art, and events of the country. Not to say that heroic and monumental expressions are out of favor. Mount Rushmore, the monuments and memorials on the National Mall in Washington, DC, and the names cut into the bronze panels of the 9/11 Memorial in New York are all examples of storytelling. 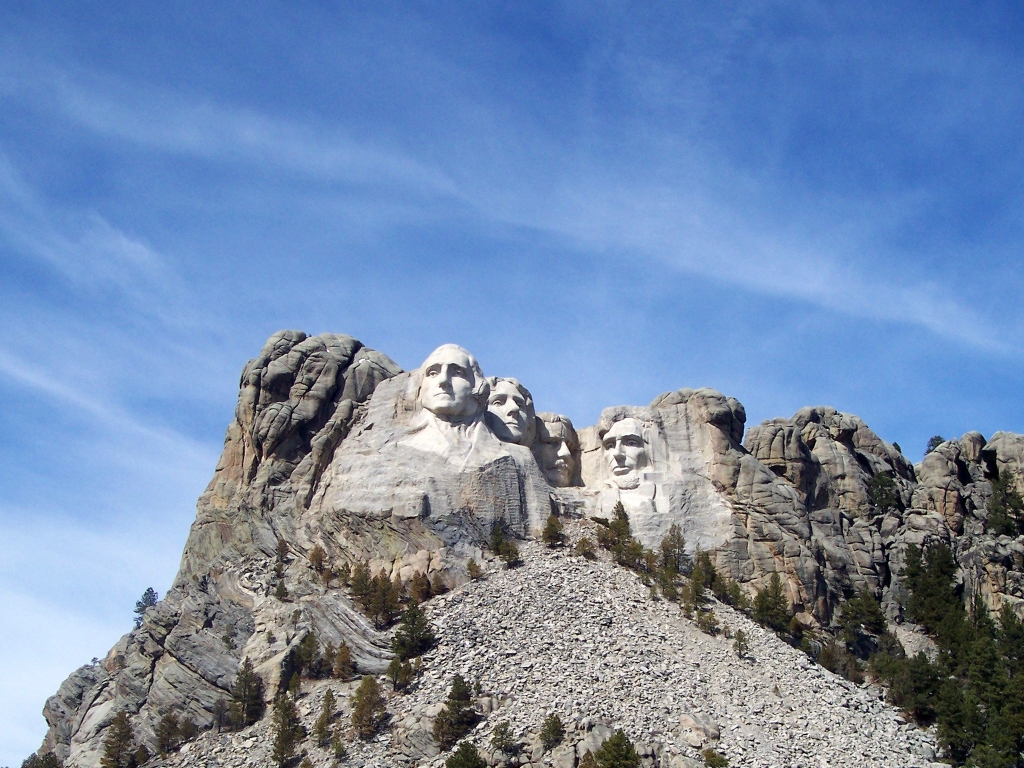 Mount Rushmore. The history of the US carved in stone.

Calori & Vanden-Eynden (C&VE) is using storytelling as the basis for an ongoing project in Detroit. There, we conceived a series of towers, appropriately called Tributes, to tell stories of events that took place along Woodward Avenue. The avenue is a 26-mile roadway linking the city’s downtown with Pontiac, Michigan and is the backbone of Detroit’s history and culture. Each Tribute tower is designed by a local artist and designer and depicts specific events, people, industries, or cultural accomplishments that took place along a given span of the avenue. Together, they form a collection of short stories, and the collection begins to create a sense of place. 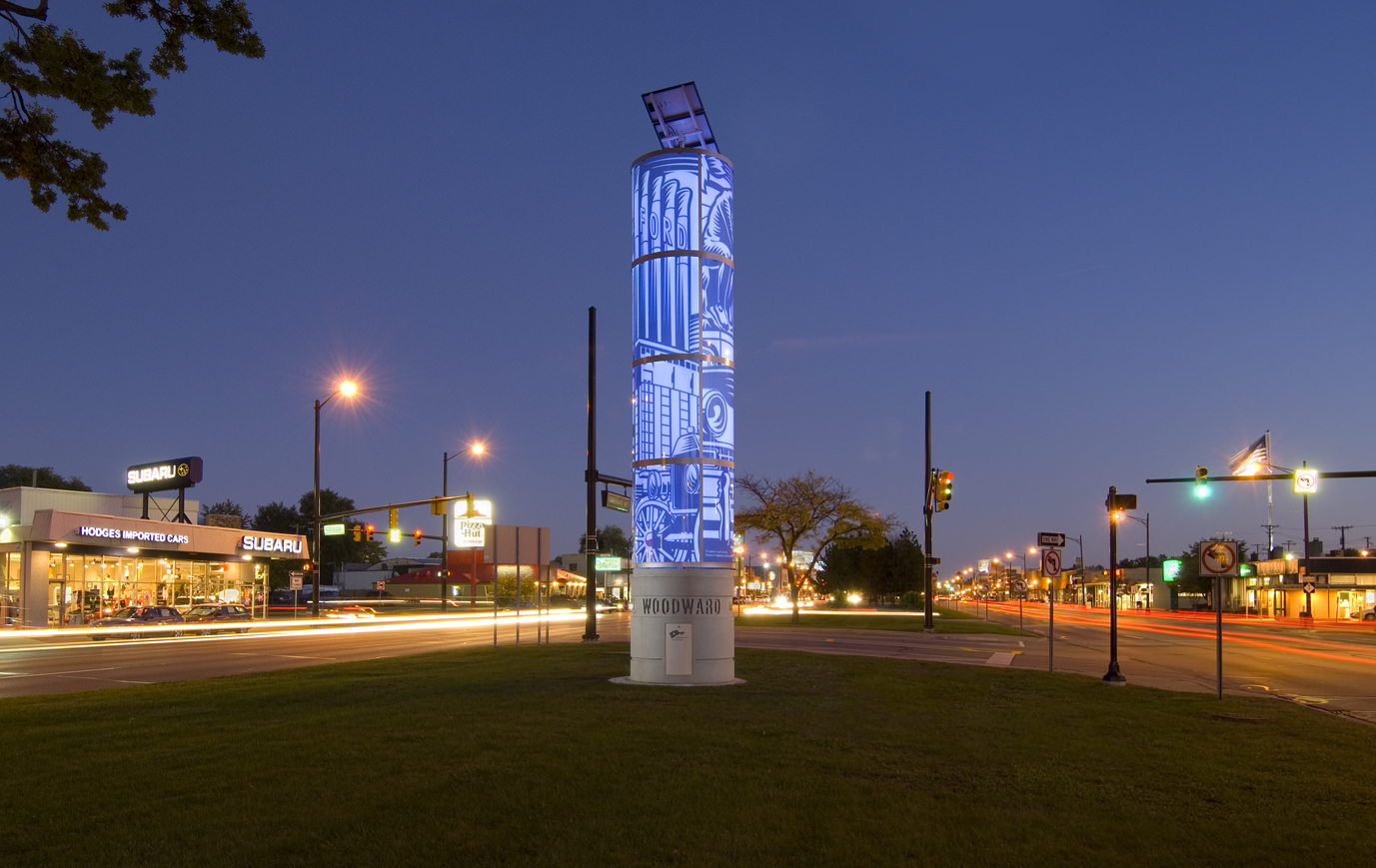 Woodward Tribute. The Tributes tell the story of Woodward Avenue, one chapter at a time.

Placemaking is another aspect of EGD (Environmental Graphic Design) that has grown in appreciation over the years. For me, it is storytelling on steroids—more than a collection of short stories, it is a complete novel. We can ignore a single story, but it is harder to ignore a complete environment. Simple examples of placemaking include theme parks—think Epcot at Disney World. Other examples include spaces that evoke a particular emotion or speak to a point in time, like the pyramids of Giza. The truly wondrous aspect of placemaking is that it can be unplanned; it does not need to be an intentional undertaking. Times Square, for example, was not planned as the crossroads of the world, it just evolved to be that way. Placemaking can be experienced in an immersive environment or as a collection of similar elements or events. 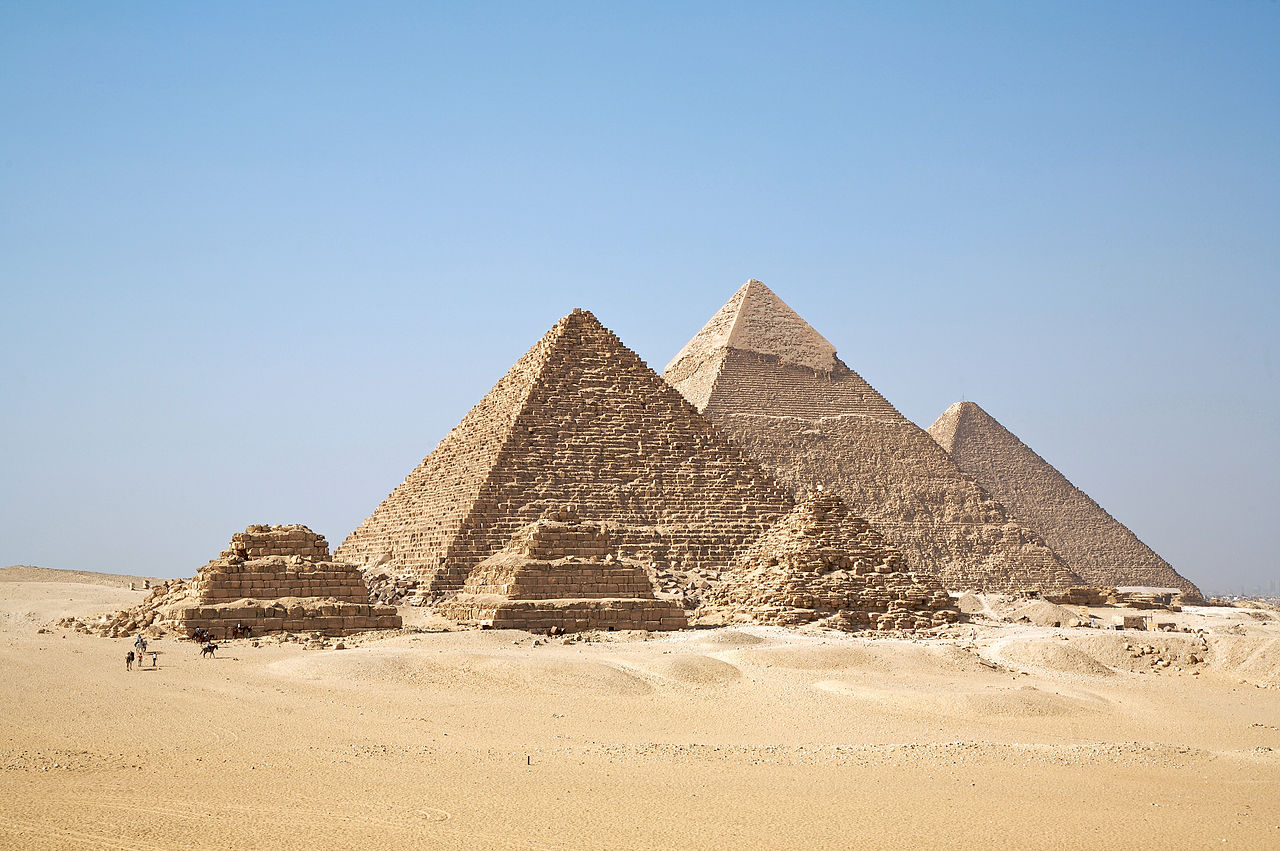 The Pyramids, perhaps the greatest placemaking effort of all time. 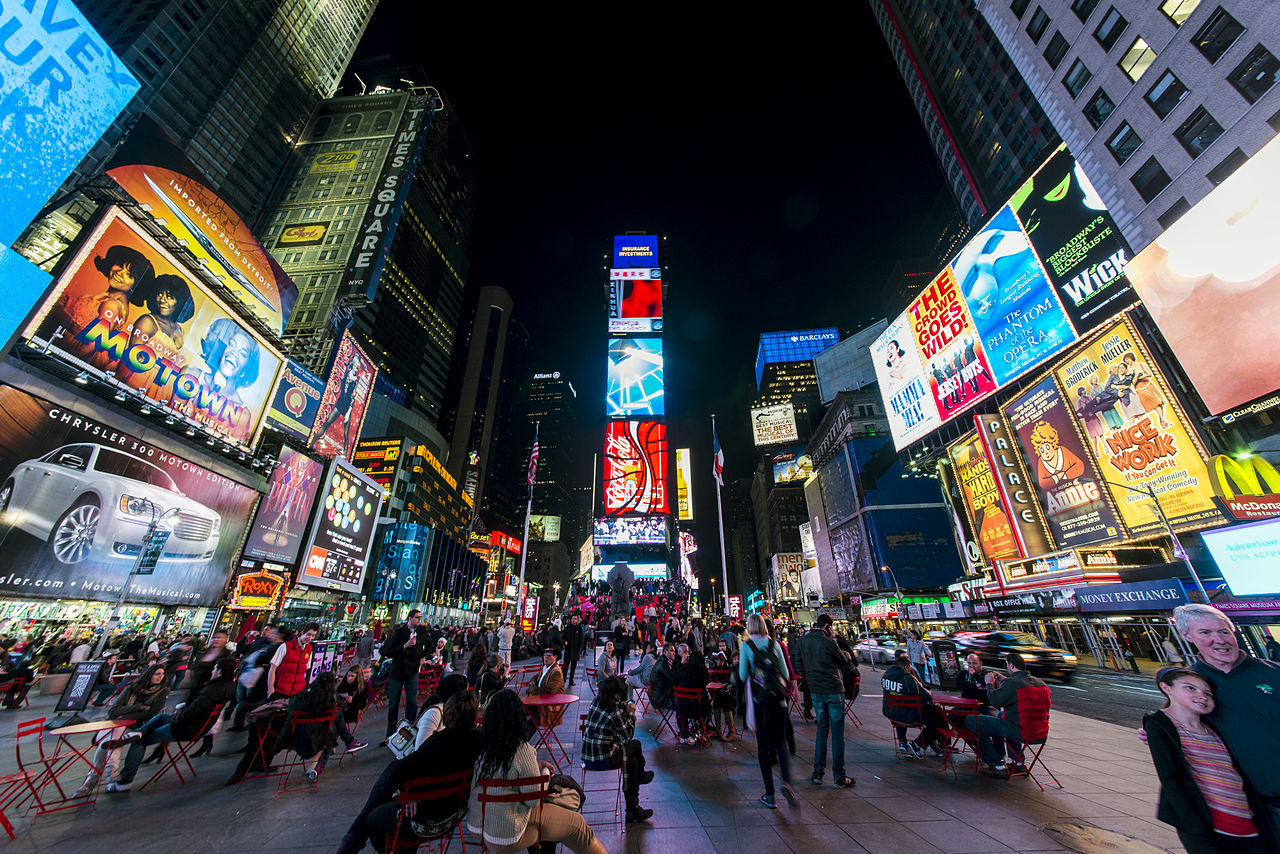 For thousands of years, environmental graphics have helped us understand, document, interpret, and preserve our collective histories, cultures, religions, and civil and social structures. And just as we have transitioned from cave paintings to digital displays to tell our stories, environmental graphics will continue to be a key narrator in the storytelling process.

David Vanden-Eynden, AIGA, FSEGD, and his partner Chris Calori, AIGA, FSEGD, lead Calori & Vanden-Eynden (C&VE), an internationally recognized, New York-based design firm specializing in the planning and design of signage, wayfinding, branded environments, identity, and user navigation systems. Chris literally wrote the book on the subject—Signage and Wayfinding Design: A Complete Guide to Creating Environmental Graphic Design Systems—which was recently published in Chinese and will be issued in a second English edition in 2015.