O+A, the go-to firm for tech companies and start-ups in the Bay Area, tackles the challenge of sound in the open office. 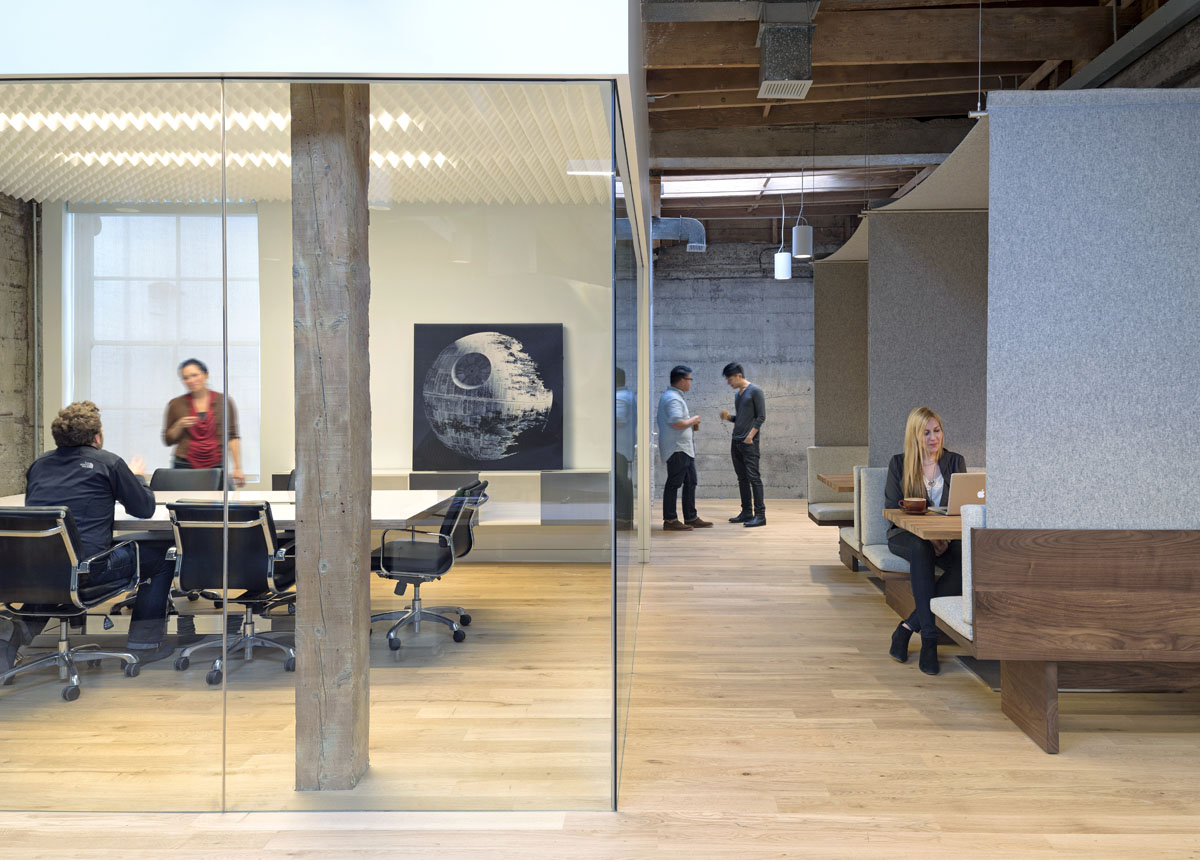 This software development company in San Francisco occupies three tight floors of largely open-plan space. “We tried to provide different levels of acoustical privacy,” says O+A cofounder Denise Cherry. “The fully enclosed conference room is for confidential conversations, but you also have in-between spaces, like the canopied cabanas, which are connected to the work area—connected to the open plan—but still have some acoustic and even some visual separation.”

Conference room ceiling made of recording-studio foam manufactured by Auralex.

In the beginning was the cubicle. And the cubicle was almost everywhere, and the cubicle held almost everyone, and it was good. Then there was the backlash, and the cubicle was destroyed, put aside, swept away in favor of the open plan, the endless span of space, floor, and ceiling—punctuated by the occasional column so that the roof wouldn’t collapse onto the floor plate—and everyone talked about collaboration, togetherness, synergy, randomness and happenstance. Renzo Piano designed a New York Times building with open stairways so writers and editors could (would have to) run into one another, and everyone remembered the always-ahead-of-the-curve Steve Jobs who, when he was running Pixar, asked for only two bathrooms in the whole Emeryville building, and insisted they be put on the ground floor lobby so that designers and renderers could (would have to) run into each other, and such was the office culture of the new millennium.

And then there was the backlash to the backlash. Those writers wanted their own offices, and editors wanted privacy, and not everyone wanted to be running into people all the time, because not everyone was actually collaborating, even though their bosses and their bosses’ bosses said that they should, because collaboration, teamwork, and togetherness—these were the new workplace buzzwords. Until they weren’t. Until people realized that they were missing—as architect Ben Jacobson said in a Gensler-sponsored panel on the need to create a balance between focus and collaboration—the concept of “parallel play,” i.e. people working next to each other, but not necessarily with each other. Until individuality came back, particularly in San Francisco in the tech scene, and particularly in the iconoclastic start-up tech scene, where people began to want something a little different. 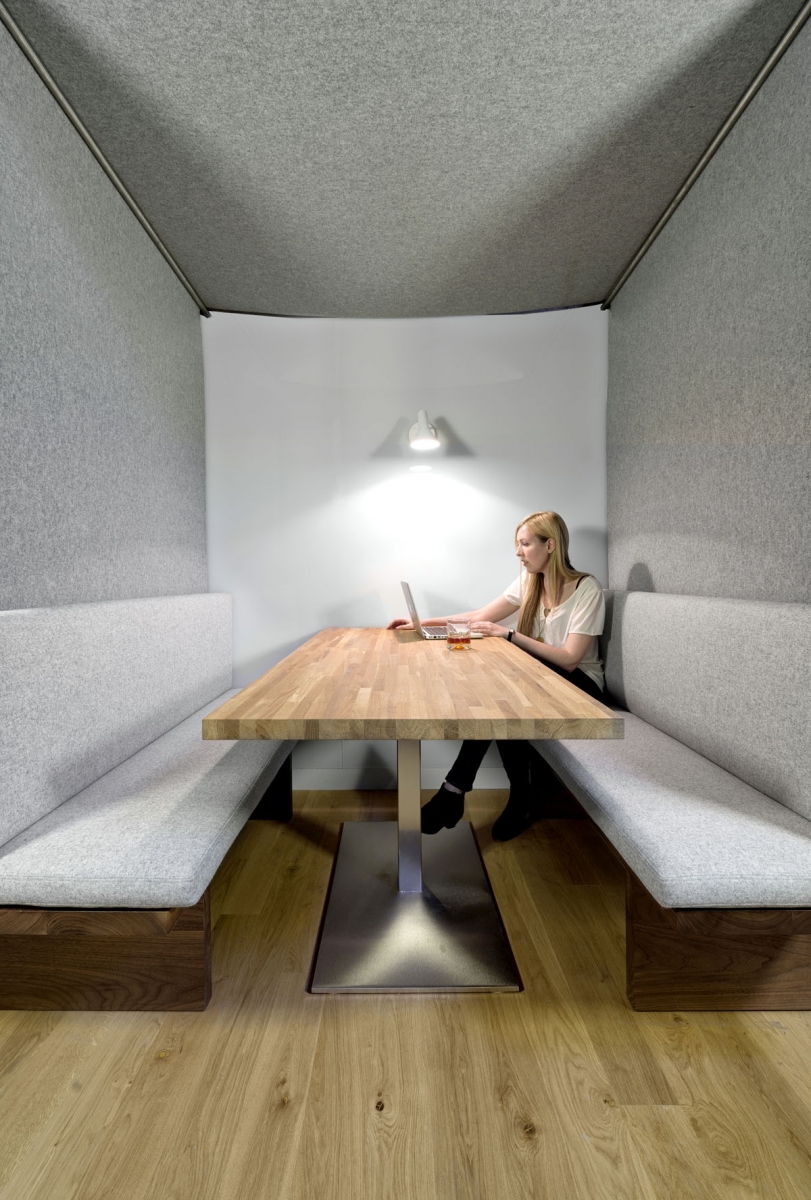 A felt canopied cabana inside the Giant Pixel offices in San Francisco. “We are open-office fanatics,” says Verda Alexander at O+A. “But it’s too simple to say a space is just open plan, because at the same time we’re creating ‘other’ spaces that mix with open-plan work areas.”

Partial acoustic and visual separation made possible by felt material manufactured by Filzfelt.

They wanted their own offices in which to code and try out their apps and test their logistics systems and hack into their own iPhones, so that they could jailbreak into a deeper and more fascinating world (one that William Gibson’s desk jockey, Case, of the 1984 novel Neuromancer would be more than a little familiar with). At the same time, they wanted to be able to run things by John in engineering or Zephyr in accounting. And so some of those people came to an architectural firm based in San Francisco named O+A, and they asked for help. 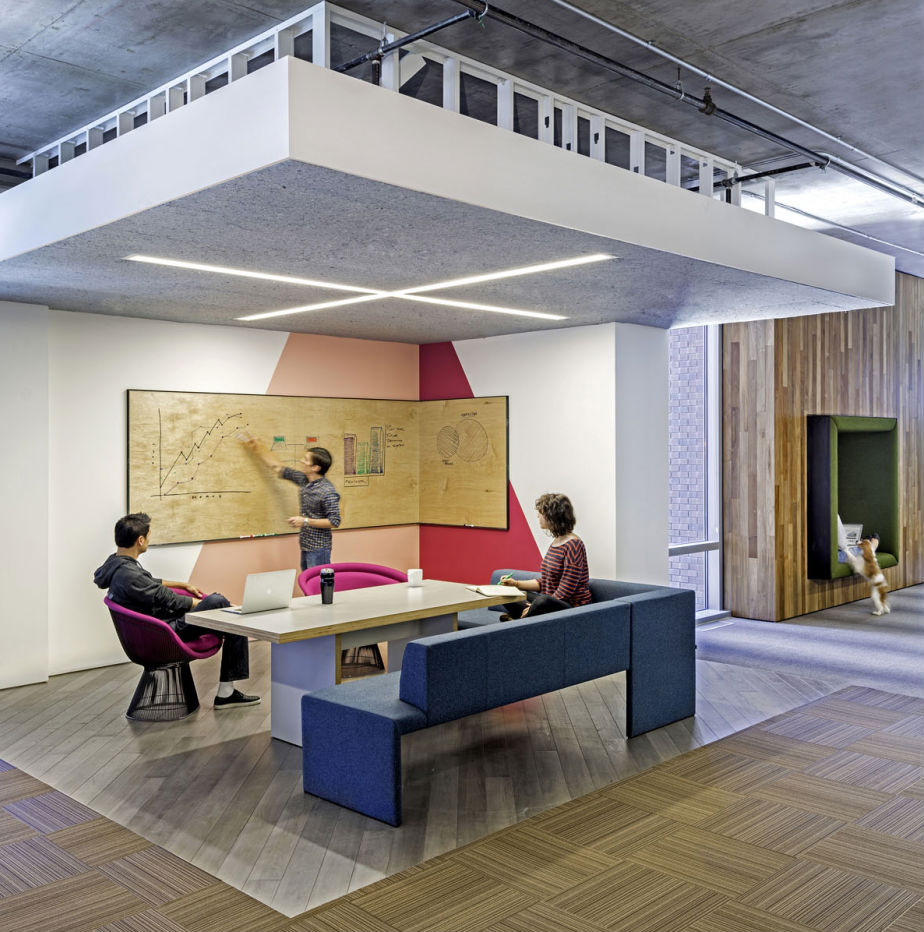 For Meraki’s 110,000-square-foot office in San Francisco, O+A used clear sight lines and collaborative spaces to create a feeling of intimacy. “We’re very interested in exploring how you create a space without using walls,” Cherry says “This feels like a room. It’s set up like one. And, acoustically, it works better than you would think, because the sound gets captured in that felted ceiling, which is more than two inches thick.”

One such company was Cisco, or actually a subsidiary of Cisco, just acquired, called Meraki—a company that produces wireless routers and manages the cloud that exists, let’s just be real about it, everywhere. They had two lumbering floor plates, about 50,000 feet apiece, and what were Primo Orpilla and Denise Cherry of O+A going to do except work with what they had? “How do we create a space that feels very open and light but is still cognizant of visual and acoustic privacy?” Cherry asks. You know she knows the answer, even as Orpilla jumps in with his own: “Scene changes, material changes—we can define a new space.” 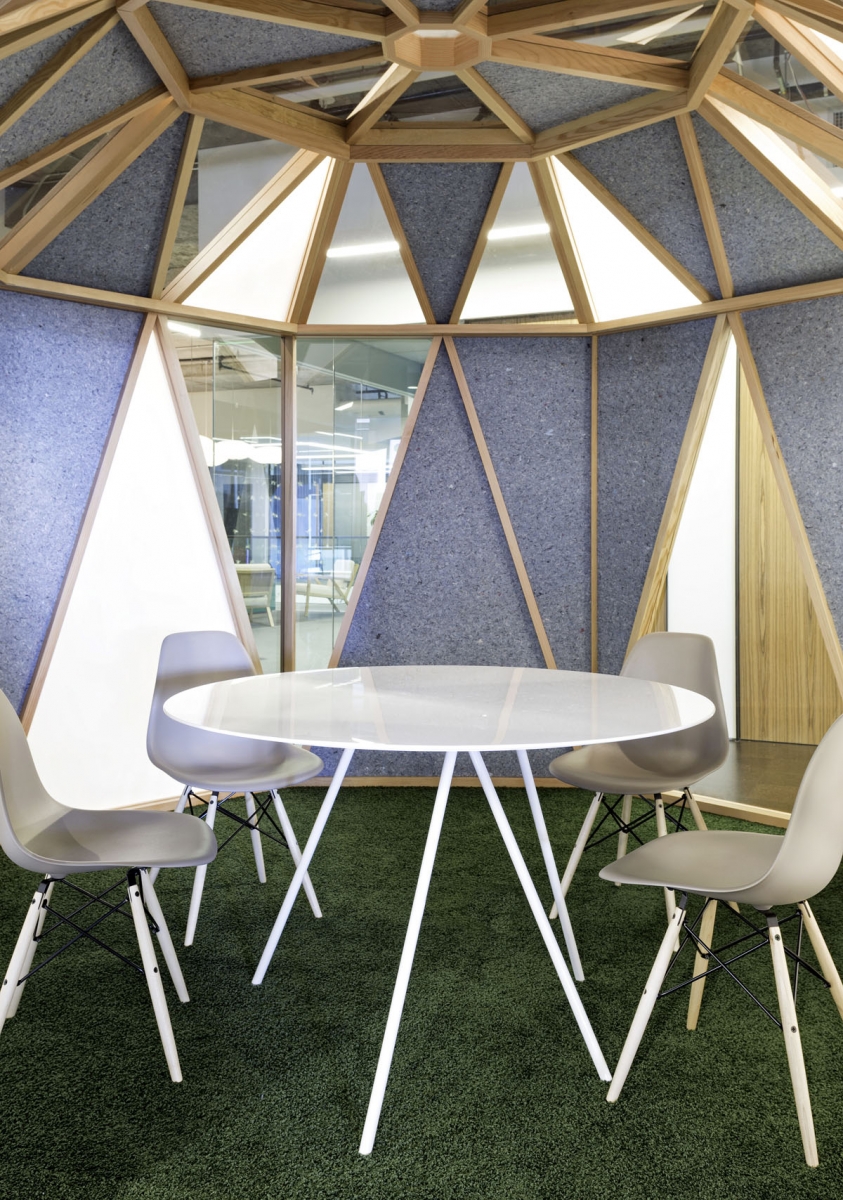 The firm also designed three types of meeting “yurts.” “In each of the different typologies, they get a little more private and insulated, depending on the kind of conversation you want to have,” Cherry says.

A good example is the “yurts” they designed, with a layer of gray felt that insulates for sound, a layer of smoked acrylic that allows some visual transparency but not so much that there’s the let’s-all-be-watched fishbowl effect, and another of white fiberglass that lets through light but not a single specific peep into what the yurt’s inhabitants are doing. The company had original Mongolian fabric yurts in its first office, but when there’s only fabric “there’s no acoustic separation at all,” Cherry points out. So this time they built them—ten split among three different types—for variations on visual and acoustic privacy. They’re not scattered here and there randomly, but are centrally located so that if and when “you want to have a very quick nonconfidential meeting, you can pop into one of these and it’s very adjacent to work areas,” Cherry says. 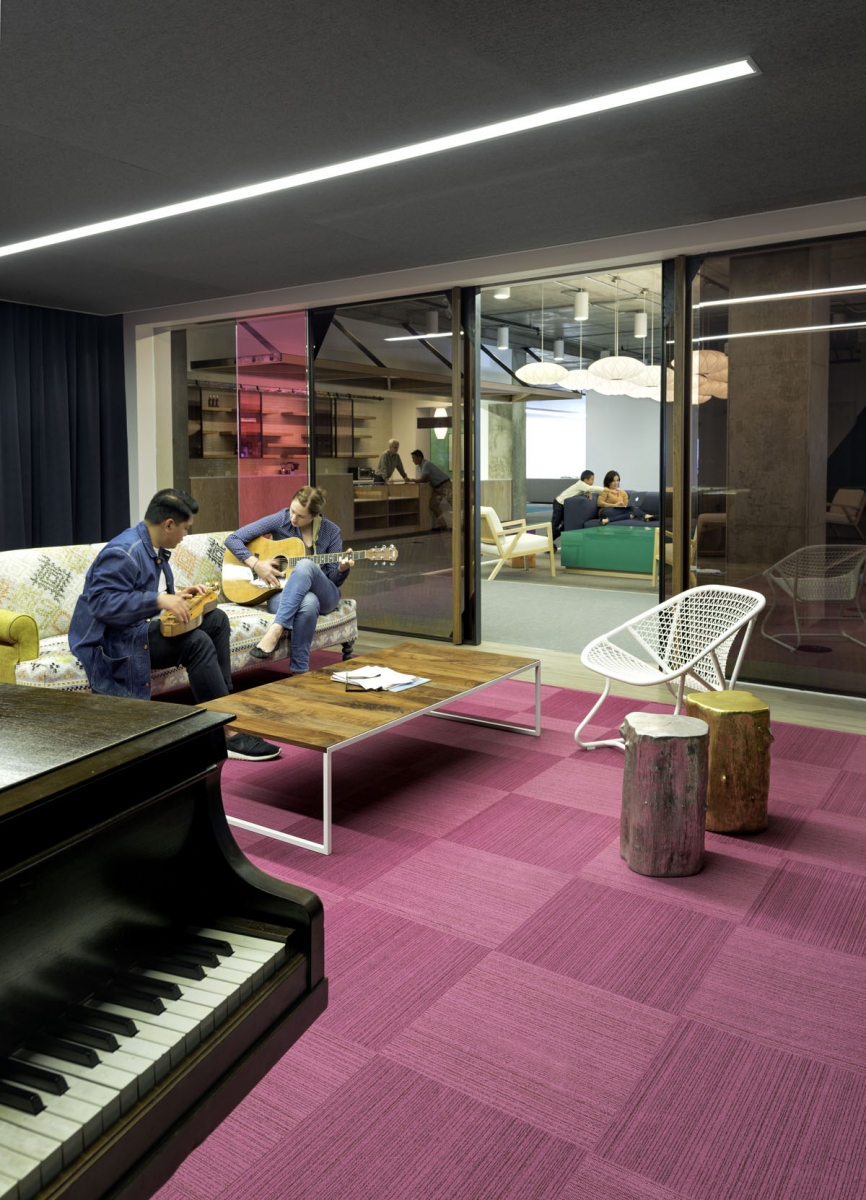 The music room at Cisco’s 110,000-square-foot offices in San Francisco

There’s also a music room—a sort of total upgrade to the idea of work-as-campus—with a piano and, as Cherry says, “a lot of unidentifiable instruments that we couldn’t figure out.” Of course, there needs to be a way of blocking all of that guitar, lute, and tabla sound from getting in the ears of people busily trying to design and produce routers and manage the nonephemeral parts of an ephemeral storage system. So sliding doors and acoustic curtains and a thick, plush, pink carpet absorb the noise of the necessary breaks—necessary because people are working such insane hours. 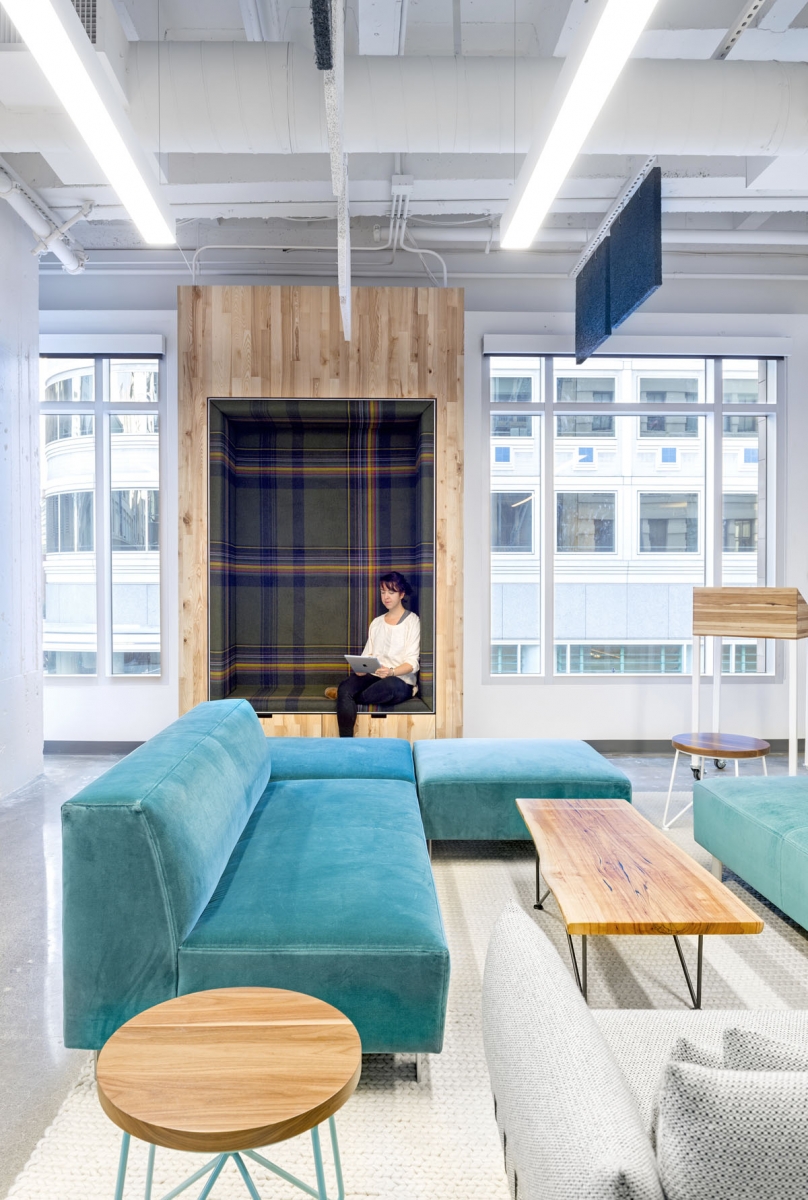 The bank has created entrepreneurial Capital One Labs in three cities: Washington, D.C., New York City, and San Francisco. The Bay Area outpost, designed by O+A, has 35 full-time employees operating in an open-plan space that looks and feels like a hotel lobby. The fully upholstered cubby is, Cherry says, “a cozy place to tuck away. Even though it’s really just a big open workplace, we also created these quiet little respites.”

The fully upholstered cubby, lined with Paul Smith Plaid cloth by Maharam, isolates sound while still maintaining a visual link to the rest of the space.

Why do engineers want a music room, though? Why do they want to stop coding and pick up a guitar or poke at some piano keys? “A lot of engineers do digital work,” Cherry says, “and they’re looking for an analog balance.”

And that’s the crux of it, of all this materially focused design that the firm has done for numerous other tech companies in San Francisco. At first glance, the offices might seem almost overly textured, crammed full with an entire color spectrum and pops of light and smooth swatches of impossibly clear teak, and with hanging ropes with lightbulbs on the end and plaid-lined privacy nooks. All of these offices look like the complete opposite of the ephemeral and technological worlds these companies—and their employees—live in. But that’s exactly why it’s so necessary to have a drop Tectum ceiling in the Capital One office, for example, or felt-canopied restaurant-style cabanas in the gaming company Giant Pixel’s office, or the industrial felt ceiling in the communal space of smartphone security firm Lookout, or those light-emitting ropes at Yelp’s multifunctional floor-plate-filling cafeteria. 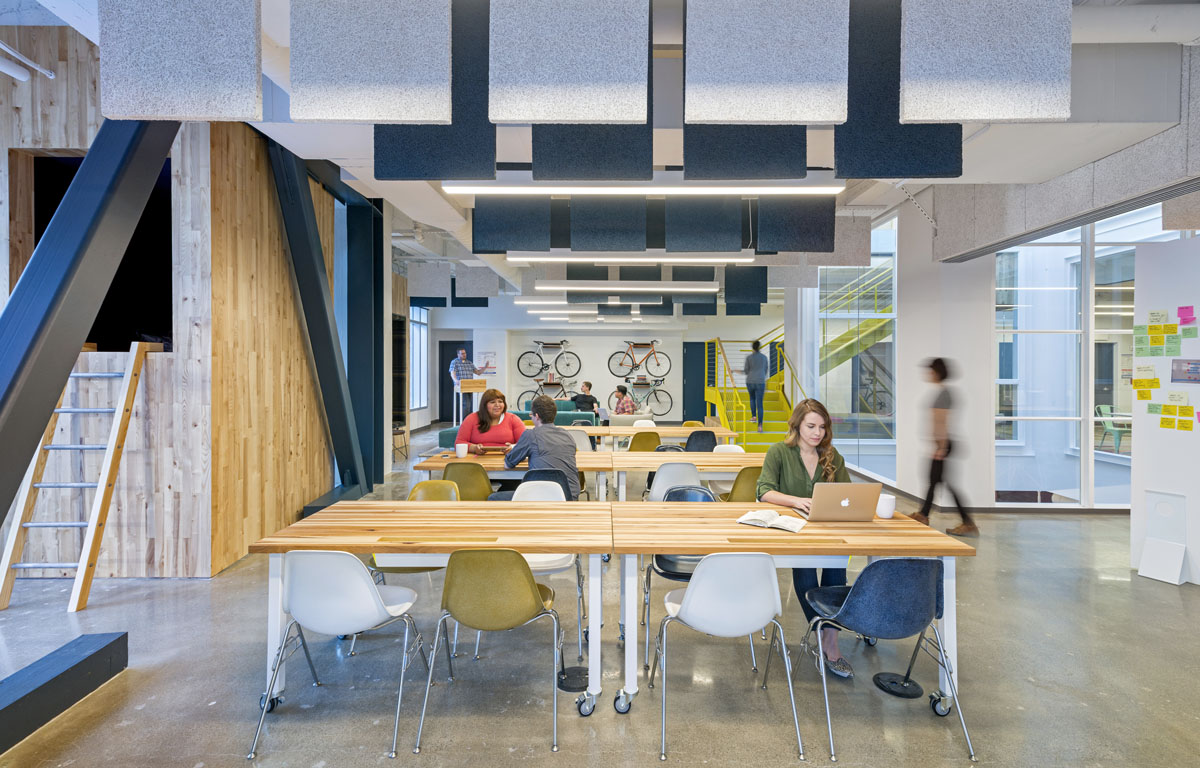 The Tectum ceiling panels (above) appear to be largely aesthetic. “They make a beautiful pattern, but it’s not a random one,” Cherry says. “By offsetting those vertical baffles, you’re creating a series of sound barriers, so they’re actually doing double duty.”

“We try really hard to not make technology a big part of the design,” Orpilla says. “It fades into the background—we just want space where people can do their work.” O+A is inspired by lessons from the hospitality industry—think of the 1980s emphasis on the hotel lobby first codified by Philippe Starck and his original Royalton and then finalized for the millenials by the late Alex Calderwood’s Ace Hotel in New York, designed by resolutely analog firm Roman and Williams. The performativity of the lobby had swung too far by the end of Starck’s reign, and it took 20 years for openness to come back. Now, Cherry says, “I think the backlash against the open office is very similar to the backlash against closed offices—the minute that the pendulum swings too far into one extreme or another, it becomes unsuccessful.” People still need concentration areas, they still need quiet space, and they also need to be able to collaborate with each other, to ask for direction from their team captains and give direction to their interns. 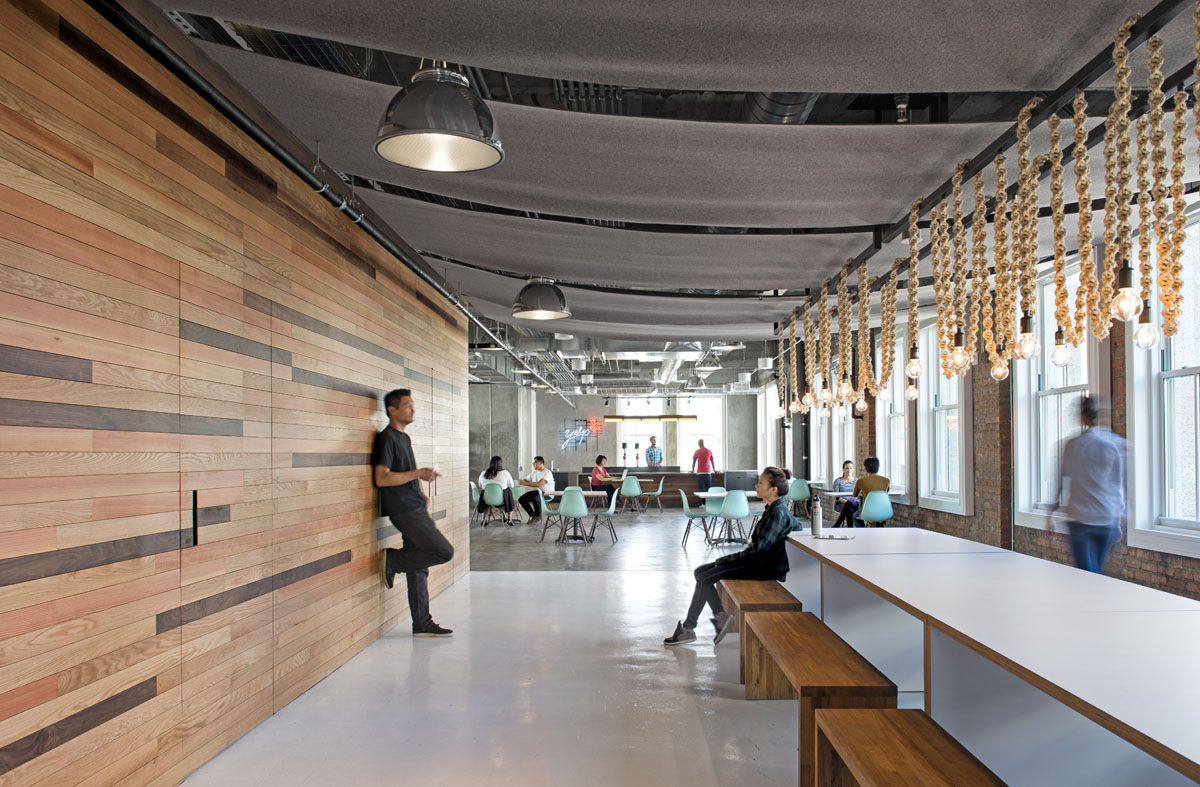 “People work for a long time in these spaces and they need variety,” Orpilla says. And then there’s the investment: “If you can work anywhere, what makes you want to work in an office space?” he asks. That’s the question the firm went into these five projects with, as well as the combination of materiality, openness, enclosure, wood, concrete, rope, computers, desks, conference tables, nooks, dropped ceilings, whiteboards, Mongolian yurts, music rooms, and people. Always people. Just not always in your face.