The Spanish headquarters of Cosentino are a bit paradoxical. The spacious offices in the small community of Cantoria are a testament to the beauty of the company’s products. The building’s interior is covered in their stone surfaces and, with the sun shining into the atrium, Cosentino presents a glittering showcase that is the ultimate marketing tool. “This is why you want to purchase our product,” the building says. But outside the sleek offices visitors find themselves on an immense manufacturing campus. Trucks loaded with quartz mined from nearby quarries rumble by, while a constant buzz emanates from the surrounding factories where tiles are cut, colored, and glazed.

However, neither the glamorous offices nor the bustling factories are today’s main attraction. Visiting architects and designers ride golf carts to another building on the outskirts of the industrial park. It’s Cosentino’s newest work-in-progress: a factory using a potentially groundbreaking technology that will enable it to produce a new type of extremely hard, chemical- and weather-resistant surface.

Dekton, as it’s called, is the result of 22,000 hours of research and development and $172 million. With such a huge dedication of time, effort, and money, it’s somewhat surprising to learn that Dekton sprang from a series of informal discussions about five years ago. Architects and designers were looking for a surface they could use both indoors and out that would hold up against a host of extreme conditions. “The conversation was simply about overcoming limitations in terms of design, temperature, and UV resistance,” Valentin Tijeras Garcia, Cosentino’s director of product and innovation, says. “Then we started to analyze the technologies available in the market.”

An overhead view of Cosentino’s headquarters in Cantoria, Spain

Their exhaustive research led them to a much bigger idea: creating an ultra-hard surface using a new technology that replicates the natural process of  metamorphic rock formation. The morphing of two rocks (as you may recall from middle-school science class) happens when those rocks are placed under thousands of tons of pressure over eons, causing an intense heat buildup that changes the physical characteristics of the rocks as they meld together. The result is an entirely new stone that is stronger than the two originals. So, Cosentino’s chemists wondered, could the painfully slow creation of metamorphic rock serve as inspiration for a new way of manufacturing?

The answers came from the development of an advanced, exclusive Particle Sintering Technology, a type of intense pressure that squeezes particles into a single form. Garcia explains it for the layperson: “We have these inorganic raw materials found in glass, porcelain, and natural quartz pressed together with the pressure of 25,000 tons. We need a bit of heat for chemical reactions to take place, so we bring the temperature up to 1,200 degrees Celsius. Then we cool it until it’s almost liquefied. It’s not going to liquefy totally because we’re creating a magma so the material crystalizes. This pressure is like a mountain on top of the material, and the heat is equivalent to the core of the Earth. That’s what we’ve matched.” But, unlike in nature, the process won’t take 20,000 or 30,000 years—but four hours. 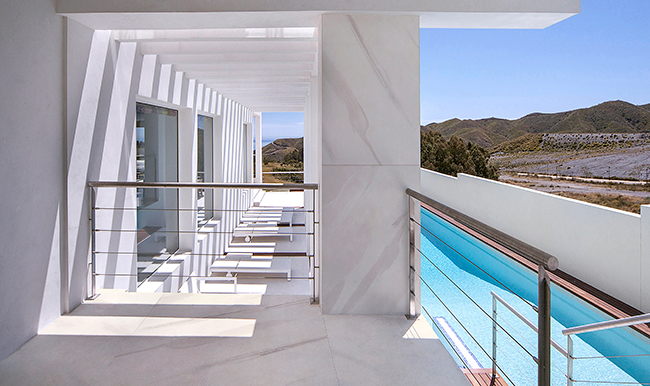 “Multiple uses come to mind,” says architect Philipp von Dalwig of Manifold Achitecture of the Dekton’s potential. “For instance, the blurring of the relationship between interiors and exteriors.”

Developing the technology was clearly a challenge, but the team faced an even bigger one in finding a press large enough to replicate the geologic conditions found in nature. “When we went to machinery manufacturers and told them what we wanted to do, they looked at us like we were fools,” Garcia says. “We had to change people’s minds, make them believe it was possible.” The company finally found a manufacturer (whose name it doesn’t reveal) willing to take it on. No easy task, since each piece of the press had to be tooled from scratch, a process that took two years. The necessary equipment—including the 25,000-ton press and a 600-foot-long oven—was so immense that a new 750,000-square-foot facility had to be built to accommodate it.

Now, Cosentino is ready to showcase Dekton to the world. For its October launch the company is working with seven firms—Architecture in Formation; Desai/Chia Architecture, Easton + Combs, Leong Leong, Manifold Architecture Studio, Moorhead & Moorhead, and SOFTlab—to demonstrate how they envision it will be used. There’s a lot of enthusiasm. Katherine Chia of Desai/Chia foresees major advantages. “Dekton is waterproof, incredibly durable, and comes in very large sizes which provides tremendous flexibility,” she says, noting this will also allow for  a refined level of detailing both indoors and out. Matthew Bremer of Architecture In Formation calls Dekton unprecedented, saying, “It can take on a variety of tasks, but be a chameleon visually. It also presents a real opportunity for product development.”

One question remains: If Dekton is truly revolutionary, isn’t its maker worried about competitors knocking it off? “The reality is that people have tried this and nobody has done it,” says Eduardo Martínez-Cosentino, the CEO of Cosentino North America. “We prefer not to patent the process. There’s no way that we can protect our work. We don’t know what’s going on in China. What keeps us safe is that we don’t reveal the secrets of the process. It’s like the Coca-Cola formula.”