Upon first encountering the new chair and bench prototypes from the Dutch design duo Tejo Remy and René Veenhuizen, of Atelier Remy & Veenhuizen, you’d be forgiven for not immediately registering the furniture’s material. From a distance, the objects appear to be inflated. Are they vinyl? Plastic? Then again, they could be leather; they look […]

Upon first encountering the new chair and bench prototypes from the Dutch design duo Tejo Remy and René Veenhuizen, of Atelier Remy & Veenhuizen, you’d be forgiven for not immediately registering the furniture’s material. From a distance, the objects appear to be inflated. Are they vinyl? Plastic? Then again, they could be leather; they look malleable and seamed and just a bit overstuffed in places. It’s only on closer inspection that you see the telltale pocking on the surface that can only mean one thing: The chairs and benches are fabricated of concrete. Poured into plastic molds and structured with steel, these pieces read one thing (light, airy) and are another entirely (cement and metal). 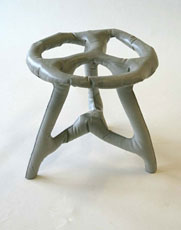 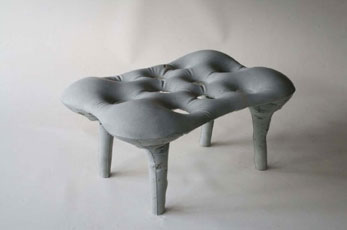 That this kind of trompe l’oeil playfulness comes out of Atelier Remy & Veenhuizen should be no surprise. Remy (one of the original designers in droog) and Veenhuizen have built a reputation for using common materials to spectacular effect. Their studio in the Netherlands is a place of unfettered experimentation, where mundane objects like tennis balls and discarded wool blankets find a second life in seating and floor coverings. There is, they say, inspiration in repurposing. “Robinson Crusoe was stranded on this island and he had to reinvent his paradise by using what was already there,” Remy says. “We use what’s available.”

The breadth of work coming out of the studio is now on display at Industry Gallery in Washington, D.C. This is the first U.S. solo exhibition for the designers, and its title—Hands On—references their process. Every piece in the show (save one metal picnic bench) has been made by hand. “The process is in making things,” Remy says. “We don’t draw. We don’t go to the computer. We just make the model first and explore. And then we make it bigger.”

“We do use the computer sometimes, but we prefer to work hands-on,” adds Veenhuizen. 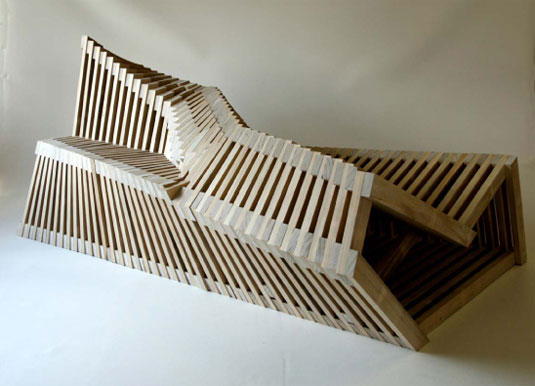 This is shocking, really, when you look at things like their Reef Bench (above), constructed of renewable Accoya wood. (Think, in contrast, of SHoP Architect’s Dunescape benches for P.S.1 Contemporary Art Center and the fact that they were rendered and cut by computer.)

While playful, the selection of material is not without reference. The tennis ball bench was commissioned by a museum and is meant to represent the ever-evolving entirety of a museum collection; the balls act as a metaphor for an organism, with intact molecules that connect and grow to realize new forms. Then there’s the Accidental Carpet, constructed of strips from discarded wool blankets. The pieces were originally commissioned by a foundation that specializes in epilepsy research, and each covering resembles a slice of the human brain as seen through an MRI. 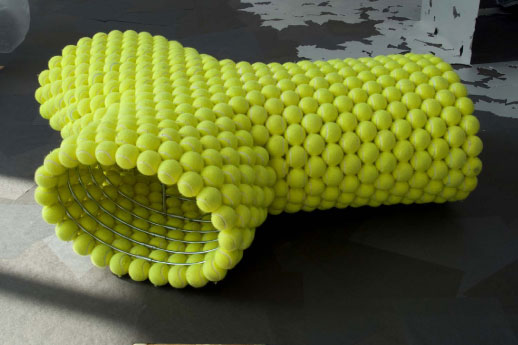 This process of letting material inform outcome attracted the interest of Industry Gallery’s owner, Craig Appelbaum. His exhibition space, which opened in January, focuses on international designers who translate simple materials into new creative forms. “There is a generation of designers and artists who are using basic materials to define a new aesthetic,” he says. “They are able to surprise us by redefining how we think of everyday materials.”

Which is exactly the effect the concrete prototypes had on guests at the exhibition opening last month. The pieces stopped gallerygoers in their tracks. “People were stunned to find out they were concrete,” Appelbaum says. “The response was overwhelming.”

Hands On runs through May 8.