The London Olympics Are Over. Now What?

Just as Danny Boyle’s cinematic representation of England’s transition from a pastoral, farming nation to the leaders of the industrial revolution, London’s East End has been going through a transition of its own in preparation for the Olympic Games. The next question that begs analysis, and dare I say it, the delightfully sarcastic judgment that […]

Just as Danny Boyle’s cinematic representation of England’s transition from a pastoral, farming nation to the leaders of the industrial revolution, London’s East End has been going through a transition of its own in preparation for the Olympic Games. The next question that begs analysis, and dare I say it, the delightfully sarcastic judgment that so often begets British dialogue, is what happens next? When the athletes, officials, tourists, and hoards of security and soldiers leave the Games to patiently wait for the next spectacle of outstanding athletic feats, what is the next phase of Danny Boyle’s English dream?

The London Olympic Committee, for all intents and purposes, has done a fairly progressive job of planning for the temporary nature of the Olympics. Finally, after 30 previous Summer Games where the host cities have seemed to plan with the spectacle in mind, and then proceed with a wish and a prayer that somehow the sites will be used after the event, the planning committees have asked, ‘Hey, maybe we should figure out what to do with this stuff when the 14 days are over’?

London has introduced concepts of temporality in its buildings, unlike previous Olympic host cities. Most of the major sporting structures will decrease in size following the closing ceremonies, or transition into other programs and uses. For this, London should be applauded. They have stepped into the zone rarely taken by architects of impermanent place making.

Yet for all intents and purposes, the Games are still an aggressive rally against thousands of displaced residents. And they’re hardly something to point to as a model of sustainability. What we didn’t see on TV are the thousands of people kicked out of their homes and businesses in the name of world sport and the Olympic ‘spirit.’ So the question still remains, despite all the talk of planning and paying attention to the post-Olympic let down: what is REALLY going to happen to the buildings, the open spaces, and the people that had to relocate all in the name of tradition?

We only have to look back a few short years to the Athens Olympic Games of 2004 to see the fissure between the spectacle scenario of the event and the chaos an ultimate abandonment of the sites after the athletes and spectators have left town. With over $1.2 billion in security alone and nearly $11 billion in total costs, there is little to no money for maintenance of the once celebrated structures. There has even been talk that the Olympics put the Greek economy into a tailspin.

While the Olympics offer the promise of urban spatial transformation, the results are often far from the early ambitions of the planners and idealists. There are 43 sites for the London Olympic Games. London has done a fairly decent job, with very few venues needing to be built from scratch. The Olympic budget has increased to a whopping $18.3 billion, causing rational people to question what will happen to the mammoth structures rising out of those billions of British pounds.

To get more specific, I’d like to take a quick look at three of the major Olympic venues in London.

What do you do with a stadium that has a capacity of 80,000? For the London Games, the Olympic Stadium’s capacity will be reduced post-events to a permanent capacity of 25,000. The structure is comprised of a temporary steel and concrete upper tier, which holds the additional 55,000 spectators to be dismantled after the conclusion of the event. The plan is to use the stadium as a venue for sporting events, as well as cultural and community events; for example, it will host the 2015 IAFF World Championships.

What’s not clear, however, is who owns the stadium—is this a public or a private venue?  Is the lack of information a result of disorganization or deliberate obfuscation (some would argue the latter). On the positive side, the attempt at temporality in architecture is admirable, much like the Chicago’s World Fair provided a collection of temporary buildings that changed the future of that city. But in actuality, the plans for London do not extend far enough. After 14 days, what will these so called ‘cultural and community events’ be? How often will they take place? Who will organize and run these events? What is the financial model for operating the stadium? How much will it cost to maintain the stadium every year? Stadiums are costly to maintain and keep up—is this really what the city needs? And if the proper analysis indicates that a long-term stadium is more of a burden than an asset, what can designers do to create truly temporary venues that don’t crush the host city in the post-game world? 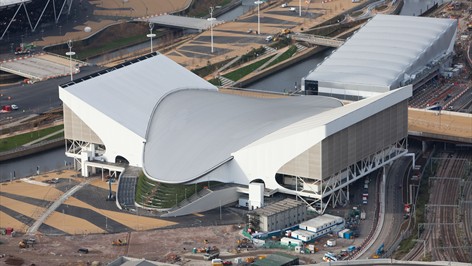 Let’s move over to the new swimming and diving center designed by famed starchitect Zaha Hadid as the stylish accessory to the Olympic Stadium’s traditional form. That being said, will its beauty be enough to sustain the facility post Games? The Olympic Committee believes so. They anticipate the facility will attract swimmers of all levels at an estimated 800,000 visitors a year.

By design, the Aquatic Center will transform from 17,500 seats to a capacity of  2,500 by removing the seating ‘wings’, creating a flexible facility for the future. While the object in space, with the added “wings,” is less of a beauty to look at, critics who rail against the Aquatic Center have overlooked the facility’s ability to convert to a smaller size post-games.  People love to swim, and in a climate like London’s, swimming outdoors is rarely an option. There are currently approximately 16 suitable swimming venues in London, with two being outdoor facilities. In a city with a population of 8,174,100, that means that there is one pool for every 510,881.25 people. That is absolutely not enough, and having an additional great indoor swimming facility can do wonders to the city’s healthy living environment. 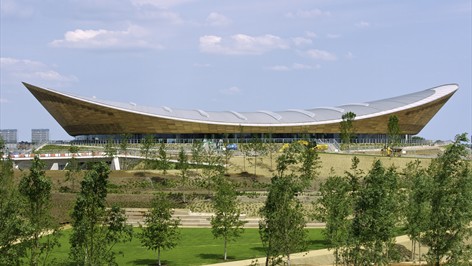 The Velodrome, home to the indoor cycling events throughout the Olympics has been touted as one of the most sustainable and iconic venues of the Games. Yet the materiality and construction of a building are only part of the story of sustainability. If a building that is constructed out of sustainable materials is never used, can you still call it sustainable? As Mark Hough wrote in the recent July Landscape Architecture Magazine, “There is nothing sustainable about spending billions of dollars on venues that will be used only for a few weeks.” Amen.

Let’s look at the plan made by the Olympics Committee for the future of this massive structure.  Taking a direct quote from the 2012 Olympics site itself, “Legacy was at the forefront of the design and build of the Velodrome.  After the Games, the venue will be handed over to the Lee Valley Regional Park Authority and form the heart of a new VeloPark for use by the local community, clubs and elite athletes. The VeloPark will also include the reconfigured BMX track, a new mountain bike track and a new road cycle circuit, as well as a café, bike hire and cycle workshop facilities.”

Well, that does sound pretty cool. But with the British economy in dire straits and the Euro tanking exponentially with every ring of the early morning stock exchange bell, will the Lee Valley Regional Park Authority be able to fund its maintenance? Where are those numbers? Would a temporary building that turned into an outdoor bike park with less maintenance costs be more ‘sustainable’?

Without sounding like just another critic, I think it’s high time we stopped calling the Olympics an economic catalyst and look more closely at the impact they have on communities before, during, and after the spectacle. In a few weeks, when we’re lost our Olympic Fever and returned to our daily lives, these buildings will weigh on the land (and the finances) of another host city. We praise the new designs as lofty, innovative—and egregiously, as “sustainable,”—a term I can’t believe is used in the same sentence as “Olympics.” If the call to engage, think, and build truly sustainable urban design and infrastructures within cities is something we aspire to, perhaps we should think of the Games as a massive opportunity to truly invest in the reinvention and renovation of a city.

Laura Mosca is a designer and writer with a M-Arch from CCA and a BA from Brown University. Her recent thesis work at CCA looked at the future of Olympic Games and Events-as-Spectacle, with a focus on designed modular structures that can fit within local communities and adapt post-games. She currently runs her own consulting practice that acts as an ambassador of design to people, organizations and cities.