The Power of Speculation

It turns out that the 1939 World’s Fair in New York was only the culmination of what seems to have been a veritable craze for International Expositions in the United States. Designing Tomorrow: America’s World’s Fairs of the 1930s, on view at the National Building Museum in Washington, D.C., until September 5, presents astounding evidence […]

It turns out that the 1939 World’s Fair in New York was only the culmination of what seems to have been a veritable craze for International Expositions in the United States. Designing Tomorrow: America’s World’s Fairs of the 1930s, on view at the National Building Museum in Washington, D.C., until September 5, presents astounding evidence of America’s world-fair-mania: posters, architectural models, films, furniture, and even Elektro the Moto-Man robot.  Throughout that glorious decade companies like GM and Stran-Steel gave designers free reign to speculate and dream. And the American public lapped it all up. The contrast with the US pavilion at the 2010 Shanghai Expo, or even recent American design shows, is almost too stark to bear. 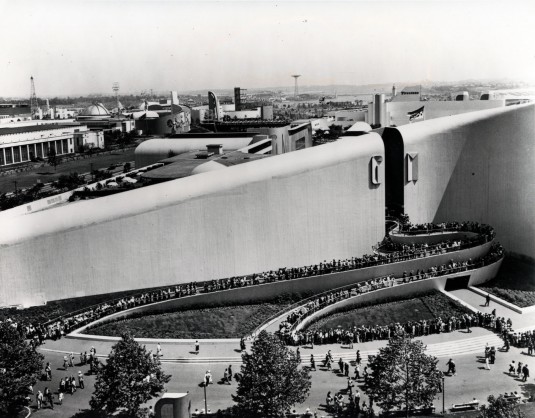 In addition to the 1939 World’s Fair, where General Motors created the prophetic Futurama exhibit, designed by Norma Bel Geddes in a building by Albert Kahn, Designing Tommorrow features five other fairs. Chicago hosted the Century of Progress International Exposition in 1933-34 to celebrate the 150th year of its incorporation, and the themes were supposedly science and industry. But people came to see design and architecture as well. Stran-Steel built a steel house, and architect John C.B. Moore created his Design for Living House with interiors by a much more famous name – Gilbert Rhode, who would become Herman Miller’s first director of design. San Diego and Dallas both held World’s Fairs in 1936, the California-Pacific International Exposition and the Texas Centennial Exposition, respectively. Three million people attended the Great Lakes Exposition in Cleveland in 1937. San Francisco exploded in color for the Golden Gate International Exposition in 1939, but it also popularized a Pacific modern style of architecture, with Asian and South American influences. 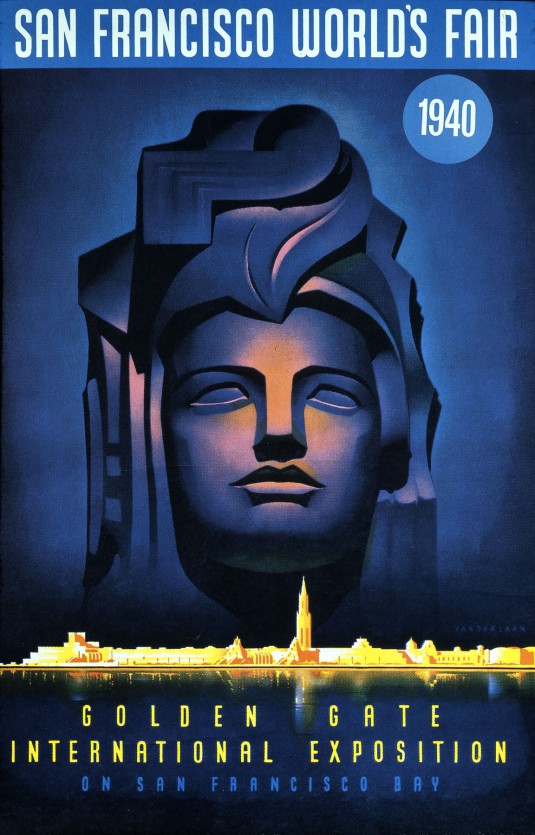 Guidebook to a 1940 International Exposition in San Francisco, from the collection of the National Building Museum.

Elektro the Moto-Man robot, at the 1939 New York World’s Fair, was the gimmicky extreme of the kind of work designers produced for these fairs, but he is representative of the common thread that runs through all of them – the future. The big guys like Chrysler and Westinghouse spared no expense to allow their designers to go wild, but even smaller manufacturers made their presence felt in Halls of Progress or Houses of Tomorrow. The industry dealt with the crippling aftermath of the Great Depression by offering the public an extravagant vision of what could be, and getting them to buy into it. 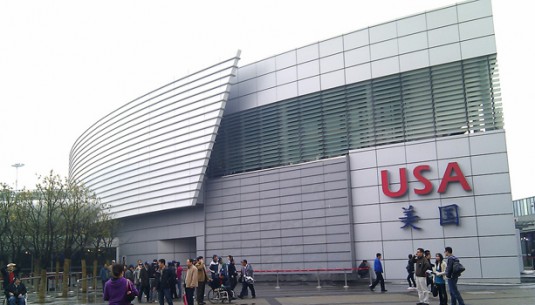 The U.S. pavilion at Shanghai 2010, photo by Ian Zhang, Courtesy Flickr, via artinfo.com

The extraordinary creative output on display at Designing Tomorrow makes one wonder what has made the aftermath of the recent recession so different. At the 2010 World Expo, even the more exciting pavilions were found wanting (Jonathan Glancey at the Guardian waxed nostalgic about the expo designers of yesteryear.) The unremarkable U.S. Pavilion came in for some pretty sharp criticism. Within America, we seem to have entirely lost the tradition of the World’s Fairs, replacing them with smaller, decidedly less-inspiring annual affairs—the Detroit Auto Show, New York’s ICFF, or Chicago’s NeoCon. And even at ICFF, the primary space for speculation was at the student booths. It might just be a product of our information age; maybe we are living in the future; maybe the internet is our World’s Fair. But after the technicolor delights at Designing Tomorrow, one can’t help but feel that those are poor consolations.

Designing Tomorrow: America’s World’s Fairs of the 1930s has been extended to September 5, so you still have a chance to see it.

If you can’t make it to Washington, take a look at the goodies on the curators’ blog, or even better, the Designing Tommorrow Flickr group.