The Socialist Car & Its Impact on Soviet Cities

To get one large point out of the way: In the new book, The Socialist Car: Automobility in the Eastern Bloc, several contributors rapidly acknowledge the oxymoron of the title as well as the practice of owning a car in the former Soviet Empire. The private automobile, that avatar of western individualism, is difficult to […]

To get one large point out of the way: In the new book, The Socialist Car: Automobility in the Eastern Bloc, several contributors rapidly acknowledge the oxymoron of the title as well as the practice of owning a car in the former Soviet Empire. The private automobile, that avatar of western individualism, is difficult to square with collectivist notions. And once its owners were at the wheel, these socialist automobiles were often difficult to reconcile with notions of mechanical reliability. More than one contemporary joke appears in the text; the introduction, for instance offers,  “Why does a Trabant have a heated rear window? To keep your hands warm when pushing it.” All that aside, the collection of essays edited by Lewis Siegelbaum, is a fascinating look at automobile use, production, and urban planning behind the Iron Curtain. It reveals a system that, if far from socialist or egalitarian in origin, created a culture of automobile use distinct from the western world.

The discussions begin by addressing the East’s initial technical borrowings from the capitalist world and repeat dips westward for design inspiration, following the spirit of Khruschev’s 1954 invocation—we must learn from the enemy in order to overtake them. Early on the Soviet state appropriated considerable numbers of Western vehicles for its military, while the Trabant was first produced at a former Audi facility; the Wartburg at a former BMW facility. Subsequent designs frequently borrowed from western models. Zavodi Crvena Zastava, the industrial concern that produced the infamous Yugo, drew upon technological collaborations with Fiat. Romania entered car production with a licensed model from Renault.

The gradual acceptance of individual car ownership began, slowly, with a region-wide redirection of production towards consumer goods starting with the death of Stalin. This switch began as a propaganda campaign, setting out to refute the bloc’s material shortcomings. The German Democratic Republic, reckoning with the prewar legacy of the Volkswagen, saw little choice but to pursue automobile production in an effort to keep pace with its western cousin.

Car sharing was still a cherished Soviet ideal. “For us, the capitalist, private ownership-based use of the car is a path to be avoided,” commented Krushchev in 1960. But a growing enthusiasm for ownership forced states’ hands and soon Ladas, Dacias and Zastavas joined the Zaprozhets, Volgas, and Moskoviches in the burgeoning galaxy of Eastern car production.

In line with collectivist ideals were aspects of production and planning. Yet these, too, had their western roots, as Valentina Fava tells it. “The reference point was still, though with some updating, the Ford Model T: motorization was to come about through a single model, and the market would be created thanks to low sales prices, low production costs, and a maximum of standardization.” The Trabant, whose 1963 P601 model endured as the standard East German issue until 1989, embodied these qualities implicitly, using a two-stroke engine for simplicity’s sake, a plastic frame to avoid using precious steel, and an extensive repair kit and manual. 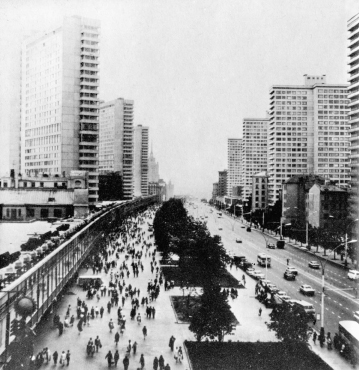 Automotive production and planning was frequently concurrent and at times directly intertwined with novel urban planning schemes. The Soviet automobile company KamAz was directly involved in planning the new city of Naberezhnye Chelny. Elsewhere, planning schemes for new freeways, arterials, and rigidly separate industrial and residential, pedestrian, and automotive zones sought to circumvent the gridlock seen as choking the West, while often drawing upon western notions of city building. The influence of the West, although it’s difficult to say capitalism, was pronounced – the hand of Le Corbusier in new towns across the Eastern bloc is undeniable. Corb’s top-down technocratic schemes, rarely implemented on large scale in the West where they were stopped by enduring property rights, found fertile soil in the East. 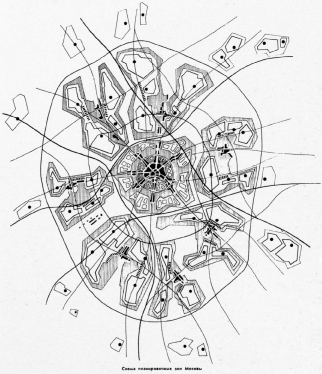 The new cities generally made more explicit provisions for transportation than their western counterparts. The Marzahn suburb of Berlin was planned to provide easy walks to an S-Bahn stop. Halle-Neustadt and Naberezhnnye Chelny were organized around central streetcar lines. Nevertheless, the automobile seemed to reign. As Elke Beyer, in here survey of 1960s city planning notes, “… the literature on urban planning recognized the role of public transit in socialist urban mobility, but its discussion of traffic problems and acceptable solutions focused mainly on the car and corresponding road systems. Pedestrians featured only as an endangered species needing to be isolated on reservations.”

Towers on plazas, ringed by arterial roads, were the typical result, in new locations as well as in urban reconstruction. Eastern planning sought to scientifically circumvent the congestion of western cities and ended up producing dreary cityscapes and commuting schemes. In the East as in the West, farmland was not the only victim. Alexanderplatz in Berlin and Prospekt Kalinina in Moscow owe their genesis to similar thinking. 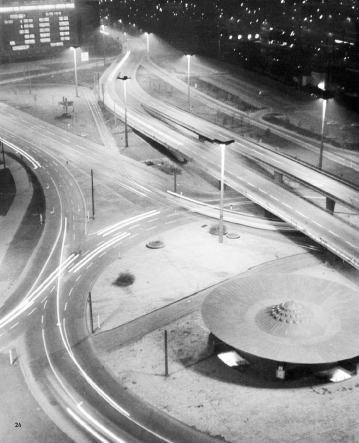 However lamentable the planning fabric for the automobile might have proved, the Eastern bloc did dodge one western malady–congestion. This was due to a considerably smaller proportion of car ownership, due to a combination of design and production shortages.

The course of popular distribution of automobiles is perhaps the most intriguing element of this tale. The car was initially pressed into public service for officials and high-ranking functionaries. Provisions for their use soon became subject to wide abuse. In Romania, records of official car use in 1958 revealed huge numbers of miles used in Bucharest, a city with an expansive public transportation system.  Efforts to rein in these abuses increased, but, as the goal of mass auto-ownership grew, the link between political fortune and “automobility” remained purposefully strong. Eastern bloc manufacturers explicitly sought to make cars for the common man, with frequent contrasts to “elite” ownership in the West. Distribution, however, followed clear channels of power.

“Cars in socialist countries are simply means of transport and bear no signs of social distinction,” Luminita Gagejel writes. “This was a commonplace assertion in the socialist consumption discourse. Objects should be cherished for their use value and not for their status. Reality, however, was somewhat different. In the Soviet Union of the 1950s the locally produced car models were arranged into a hierarchical pyramid. At the bottom stood (crawled) the tiny Zaporozhets, built especially for disabled persons, followed closely by the small Moskovich, destined for the average citizen. Next on the scale was the middle-class Volga, the wheels for the nomenklatura. One position higher stood the Chaika limousine, in which party and state functionaries were chauffeured, and on the very top was the ZIL, used exclusively during summits. Instead of just one car for everybody, there was a model for each class, ordered along a strict hierarchy. The reason for this arrangement was simple. Seeing cars passing by, one would immediately know who sat inside. Social status and car ownership were directly linked.”

By the 1970s, as Eastern bloc production increased, an intriguing phenomenon emerged. A genuine market developed – in assorted socialist cars. COMECON made some effort to avert just such development to ensure standardized production, but car manufacturing proved too great a lure for minor communist states, and a wave of mass-market automobiles based on western designs appeared throughout the region. “The Polski Fiats, Soviet Ladas, Yugoslav Zastavas, and Romanian Dacias, manufactured on the basis of Western licenses, entered socialist markets like Trojan horses and brought with them the shine of a capitalist consumer culture,” writes Gatejel. Cars from the west also trickled in. Volvos for GDR elites, Peugeots for Soviet officials, some VW models in East Berlin, and assorted Western cars in the Czech Republic. Intriguingly, though, most consumers continued to opt for local models.

Gatejel also notes that the GDR kept prices artificially high–equivalent to a two-bedroom apartment–to temper demand. Despite this, most buyers continued to opt for the homegrown Trabant (and its attendant waiting list) over imports. Automobile repair facilities were continually short of parts in the Eastern bloc, and problems were no doubt more easily addressed with a local model than a foreign make. Kurt Moser addresses the attendant culture of repair and modification surrounding GDR automobiles. With only a few official models available (windshield wipers, though part of the purchase, had to be attached by the owner). Hobbyist magazines burgeoned with DIY repairs and customizations.

Waiting for Trabants is now a relic of the past, part of a fascinating look back at the Eastern bloc experience. As the Soviet system system fades away, the physical legacy of the automobile age is far more resilient. For each streetcar or S-Bahn stop conveniently located, the ease of mass land-planning resulted in acres more remote concrete-slab housing amidst pedestrian desert, an authoritarian legacy far more resilient than even the longest-lived Trabant. Esther Meier quotes the Russian poet Alexei Aleshkov: “But where are the sources of love/And first friendship to be found/How the little rivers of childhood/Have shallowed in the captivity of the asphalted streets.”

Anthony Paletta is a writer living in Brooklyn. He has written for The Wall Street Journal, Bookforum, City Journal, and PopMatters on urban policy, cinema, historic preservation, and literature, and Metropolis on fallout shelter design.

All images courtesy of The Socialist Car: Automobility in the Eastern Bloc.