To Save the World

As Milan’s design week readies to showcase the newest, shiny furnishings by world-renowned designers at the Salone, the world is obsessing over oil spills, earthquakes, tsunamis, and nuclear radiation. We’re thinking interconnectivity — the delicacy and art of human-to-earth relationships and activities.

Our exploration of art, green, design, and architecture has led us to uncover the exciting vitality of art beyond galleries and architecture aligned with green space. From outdoors to indoors and back again, we’re asking, what is the current of conversation of our experience of the land, and how does this conversation apply to the design of our homes?

Christo, Greenpeace, the return of local green craft, techno-geekery in communication and, even the Dalai Lama, could add up to the notion that art, design, and intuition might save the world yet. As we head to the Milan fair, eager to see how top designers will display their art for interior spaces–elsewhere around the globe outdoor art interventions are springing up in cities, reflecting trends of interconnectivity, green, urban intervention, and celebrations of the transitory–we are re-organizing our thinking.

Milan’s Green Island, the green/art satellite fair of Salone, is a weathervane of a conversation that’s happening everywhere. As the fair nears its opening day, we’ll cover activities on Green Island in detail. In the meantime, we look at urban art interventions worldwide for clues to what trends Salone designers might be showing at the cutting edge of new thinking, materials, and ways to live an interconnected and green life. 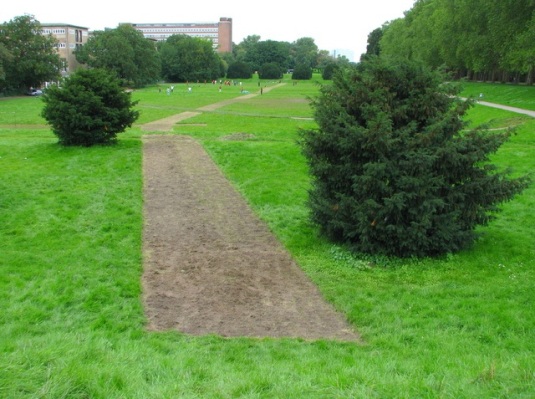 Swords into Plowshares: Lawns and Missiles removed in Germany: Artist Ralf Witthaus removed a three-meter-wide path on the green lawn of Cologne’s inner greenbelt, revealing the city’s unique architectural layout as a continuous form, a defined circular loop park altering boundaries and protocol. Cologne was one of the first cities in Europe to consider a greenbelt, way before the turn of the last century. The path encourages interaction and slowing down, running cross the Rhine through the Sculpture Park and to the location of the future 2023 National Garden Show, near the Main Market. A removal of something instead of an adding, a lessening of one’s footprint on the earth and increasing value, has been the rallying cry of sustainable movement and this project is unique in demonstrating that.

Another German project, this one by Stadtbaukultur NRW, is Raumortlabor Hombroich, a new type of “city,” and an example of their credo, to “not construct buildings or places nor …plan new roads….(we) encourage communication about baukultur….an investigation in the effect of the built environment on people’s well-being and the search for models for the future design of our cities.”

A former missile base now becomes an island in the town of Neuss, where the balance of 90% land and 10% buildings will make up a new “city”, defined by what is removed and what is most necessary. 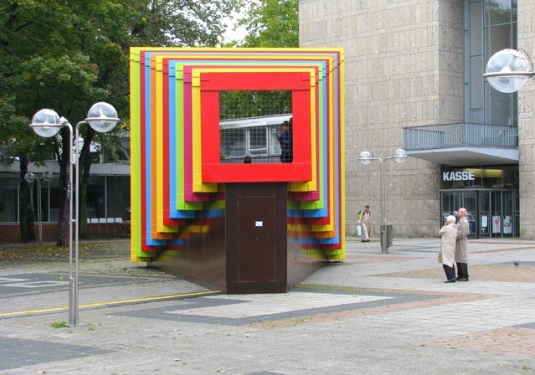 Nature in Your Face: Big Flowers and Toys in PARIS and Colgne: StadtBauKultur-NRW also explored the urban-temporary relationship in Cologne, Germany, with the SEHEN LERNEN SEHSTATION project, coordinated by Ulrike Rose.  A light, temporary, mobile wooden structure made of concentric vertical squares, built like an accordion camera with its folds, was at once a staircase and sport bleacher open on both ends. Escalation of the colored squares, a geometric cave, altered views and awareness of the city and encouraged a playful experience of being boxed in by ideas. 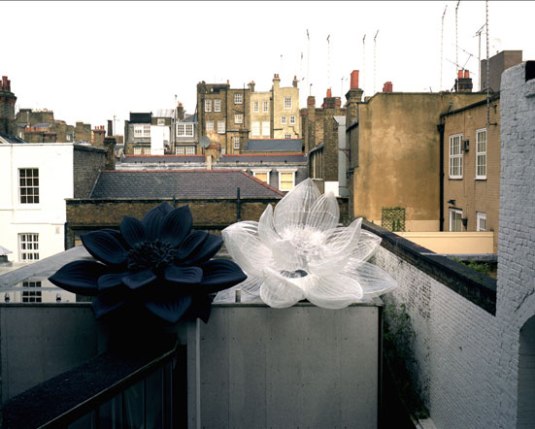 Equally playful are Jeong-Hwa Choi’s lotus flowers popping up in unlikely cityscapes, including Les Nuits Parisiennes, this April. As another public art event in a city that monthly exhibits art in its Nuit Blanche evenings—designed to get people out and interact with art in the landscape, not just galleries– green is abstract and manicured so far. If Paris invented café society, now they’re inventing a program of art in the streets as a harbinger of new urban relationship. 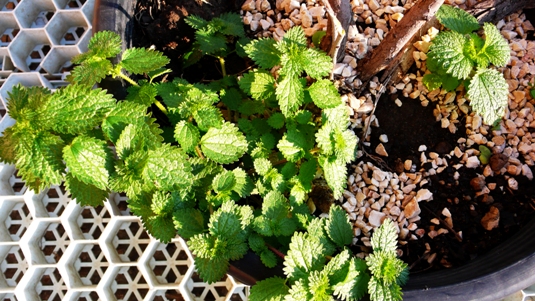 Lawns go to the roof: New US Victory Gardens: Fritz Haeg, the Artis perhaps most Popularis, who literally led the U.S. revolution to replace suburban lawns with the art and personality of a family garden, has been in Italy for the past year as the winner of the 2010/2011 Rome Prize. His simple experimental garden, the Roman Rooftop Homestead, fashioned out of discarded plastic bottles, paper cartons, fruit crates, burlap sacks, cardboard boxes, compost bin (using worms), and chronicled in his blog may be his most influential art yet, given the online audience wanting to get their hands dirty and their consciousness clean about the food they eat.  We do expect more chic rain-catchers and solar lights along with high-recycled material content  at Salone. 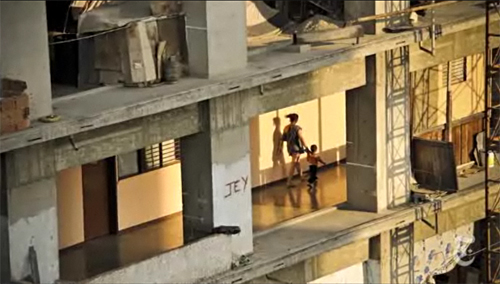 Squatting in South America: Adaptive Re-Use Art. A collaborative project by Venezuelan artists, Ángela Bonadies and Juan José Olavarría, curated by Rody Douzoglou, of the gallery without walls known as DOUZ AND MILLE. The artists present The Tower (from the inside), a luxury shanty,” based on the emblematic 60 percent completed luxury skyscraper in Caracas, now home to squatters and families living in precarious dwellings inside its urban shell with no elevators or basic services installed. The artists turn the building into iconic tourist souvenirs as social commentary on home, national identity, luxury, and Venezuela’s social and economic reality.

Adaptive re-use of consumer and economic waste was raised to an art form with Swimming Cities, the floating art/junk ship that was the talk of Venice Biennale and is a growing trend in design, often the result of entrepreneurial efforts of local craftspeople in urban cooperatives. As of yet, it has not evolved to architecture, but we see an art and social trend here. 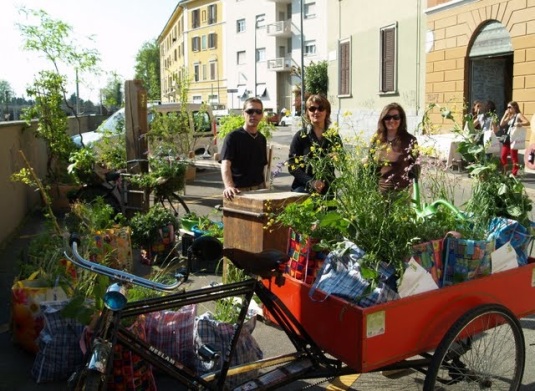 A New Museum without walls in Milan. A project of AMAZElab., the curator of the Green Island fair, is also known as MAST (Museum of Social and Territorial Art) another kind of new museum without a fixed location. MAST has built light-weight  structures at transition zones in Beirut, Cyprus for capturing story and memory as citizens migrate across borders and arbitrary city zones, as nations change identities.  The focus of AMAZElab’s urban green art, from portable gardens and Milan’s first weed garden, seem like simple concepts. Yet in a new world, with resources in question, transition, increasing migration, they whisper of a new kind of luxury.

Small Luxury Footprints, Less is More, Big Nature, Personal and Portable Lives, Gardens and New Adaptive Re-use…will designers at the Salone be tapped in or tapped out of this new dialogue? We’ll tell you what we see and hear.