The fashion designer Tomas Maier has launched a campaign to save the best of the Japanese capital’s twentieth-century architecture.

Maier stands in front of Kenzo Tange’s St. Mary’s Cathedral. Unlike several of its modernist kin, the church isn’t likely to be touched by the destructive effects of Olympic-related development.

Tomas Maier, creative director for Italian fashion house Bottega Veneta, is on a mission to save iconic works of Japanese modernist architecture from the wrecking ball. He recently launched an initiative to draw attention to a handful of these endangered architectural landmarks, which are under threat by the development ramp-up to the 2020 Tokyo Olympics.

“I think it’s very important to maintain this. This is what makes up the face of a city. This is what makes the difference,” says Maier in a video (below) for the initiative he launched with Bottega Veneta and Japanese lifestyle magazine Casa Brutus. The son of an architect, Maier has had a deep appreciation for Japanese modernism since he first visited the country in the mid-1980s. His fascination with the works are evident in the footage, which finds Maier wistfully gazing at iconic buildings like Kenzo Tange’s Yoyogi National Stadium and the Yoshiro Taniguchi-designed Hotel Okura.

The film oozes nostalgia, giving off the sense that these buildings, both originally built for the 1964 Tokyo Olympics, are already gone. They very well may be, but Maier wants the world to know about them before they go. He’s hoping they can be protected the way traditional works of architecture like temples and palaces have been.

Yoyogi is safe for now. The Hotel Okura is, however, slated for demolition, only to be reincarnated as a monster 38-story glass office and hotel tower. This would be the new Hotel Okura, a shallow substitute for the original, which Maier credits as inspiration for developing his own sense of blending traditional craft with modern design.

The video also spotlights other buildings with similarly precarious futures, including the 1963-built Nissay Theater and two other Tange projects, the Kagawa Prefectural Gym and Kagawa Prefectural Office Building. With all these projects, the culprit is nearly always the same. Many areas in and around Tokyo are being swept up in the net of Olympic-related development that is beginning to engulf the city. The historic Tsukiji Fish Market—the largest wholesale seafood market in the world—is, for example, scheduled to be relocated to make way for upscale apartments and a tunnel leading to man-made islands that will hold new Olympic facilities. 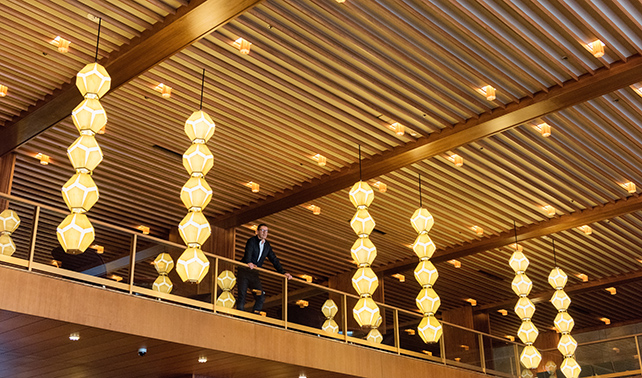 Looking out onto the Hotel Okura’s historic lobby

The fabric of Tokyo is set to irreparably shift, but this isn’t the first time development euphoria has swept over the city. The 1964 Olympics brought its own wave of demolition to the Nihonbashi area of Tokyo. The games were an opportunity to fill in canals, raze buildings, and construct an eight-lane expressway overhead. According to The Economist, this state of affairs is now officially regarded as “one of the nation’s greatest eyesores.”

Maier is hoping people come to their senses before this sort of history is repeated. If they do, Maier says, much anguish could be spared: “I think it’s important to react now so we don’t have to be upset later.”