Yale School of Architecture’s “Two Sides of the Border” Reimagines the U.S-Mexico Border

In a new exhibition at the Yale School of Architecture Gallery, dozens of photographs by Iwan Baan line the perimeter walls. The color prints depict sites in Mexico and the United States. Almost all of them are devoid of people, which is unusual for Baan; the Dutch photographer is known for juxtaposing concrete, glass, and steel with its messy, human context. We built it, we live with it.

So Baan’s photographs, commissioned for the topically urgent Two Sides of the Border: Redefining a Region, are all the more striking for their stillness. Some look like film sets. This is portraiture, of the way humans on both sides of the border have pocked and scarred the land in equal measure, from identical tent cities for separated children in El Paso, Texas, and Ciudad Juarez, Mexico, to a Pizza Hut, a church, and a high-rise coexisting in the same cramped Monterrey, Mexico, corner. In the photograph “End of the Border,” a jagged metal wall extends into the frothy Pacific surf between Tijuana and San Diego and abruptly ends. If its implications weren’t so tragic, it would almost be a comic image: a lame human attempt at control. If you don’t look at the labels for the photographs, it is hard to distinguish one country from another. This is the point.

Organized by the Mexico City–based architect Tatiana Bilbao, the exhibition is an exploration of the way that the United States and Mexico have always been culturally, socially, and economically entwined and co-dependent, and how our 1,954-mile-long border has always been permeable—“an act of memory applied along imagined lines of separation,” as Bilbao writes. She also engaged 13 architecture studios (including two of her own, at Yale and Columbia University) from 12 universities across the U.S. and Mexico to reimagine the two nations as unified region. Produced during the spring 2018 semester, the student work, mostly in the form of models, sits on rows of parallel tables filling the gallery. A third component of the exhibition is a set of maps of the two countries, some from as early as 1765, which show the two countries’ shifting political borders over time. Others were made for the exhibition by mapmaker Thomas Paturet—these aerial views prove that nature and geography don’t recognize the man-made border.

But it’s Baan’s photographs that serve as a sort of precis for the student work. He has documented what exists today and I expected the 129 student projects to look toward a hopeful, idealized future. They do, but it was disappointing to find that Nile Greenberg, who designed and curated the exhibition, decided not include explanatory text alongside each student’s project. Even the 28 geographical sites that the models and drawings correspond with aren’t easily discoverable (a key exists on a wall at the entry to the gallery). This renders the sea of models an unreadable text, as beautiful, weird, and intricate as they are.

When I asked Greenberg why he and the exhibition team made this decision, he responded by email that it was “for a few reasons, some logistical, some curatorial.” He added: “Mainly we chose to balance the limited number of individual projects that we could show with the vast imaginative landscape that the entire initiative calls for. This balance emphasizes the shared qualities and ambitions, the blurriness and richness of the topic, and, by organizing each studio together, it gives enough tonal shift to isolate certain topics.”

Ok. The result is certainly blurry. At a time when the relationship between the United States and Mexico feels desperate, broken, and exploitative, I was looking forward to a detailed atlas (a word the exhibition organizers use to describe the sum of the show’s three parts) for the future—fantasies of unity grounded in reality. The lack of text is a letdown and a missed opportunity. In her essay for the pamphlet that accompanies the exhibition, Bilbao does give brief explanations of the studios. At Raveevarn Choksombatchai’s UC Berkeley studio, “border conditions are expanded and converted into infrastructure zones … [a place] that could be mutually productive by generating jobs or increasing cross-cultural exchanges.” Two others, at the University of Cincinnati and Cooper Union, explored Mexican labor contributions to food production. 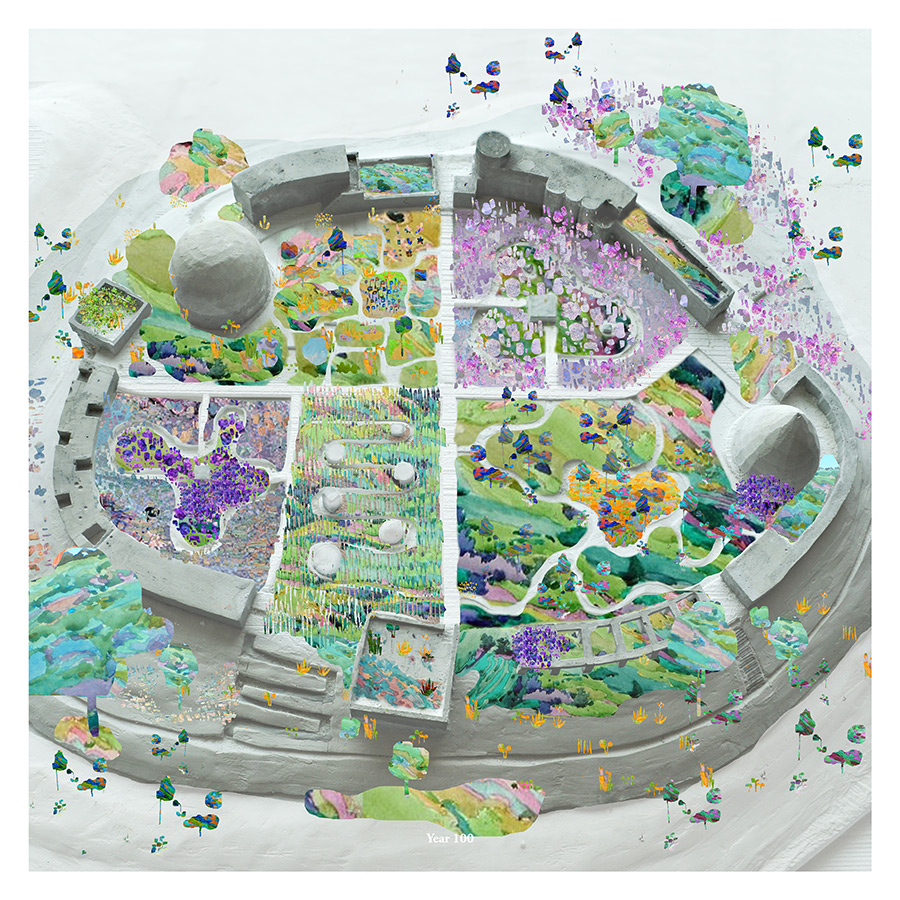 In addition to its contents being included in a symposium, Bilbao writes that the exhibition will be incorporated into a book. I hope that is true, and that detailed descriptions of each studio and student’s work can be included there. If Bilbao’s wish is to instigate “a conversation about alternative futures that will be productive for the entire continent,” let’s free the ideas from behind a conceptual wall.

Two Sides of the Border is open through February 9, 2019, at the Yale School of Architecture Gallery, 180 York Street, New Haven, CT.

You may also enjoy “The Eclectic Legacy of Bruce Goff Lives on in Exhibition at the University of Oklahoma.”