Later this month the 2012 Venice Architectural Biennale will come to a close, so perhaps now is a good time to reflect on this year’s theme of “common ground.” I traveled to Venice in October to check out some of the exhibits, which represented everything from abstract intellectual concepts to concrete solutions for the most stubborn […]

Later this month the 2012 Venice Architectural Biennale will come to a close, so perhaps now is a good time to reflect on this year’s theme of “common ground.” I traveled to Venice in October to check out some of the exhibits, which represented everything from abstract intellectual concepts to concrete solutions for the most stubborn challenges in planning and design in the public realm. The following are a few of the highlights.

The Poland and Romanian exhibits took a somewhat conceptual approach. In the former the idea of common ground is tied to our shared experience of sound. One enters the pavilion to hear brash reverberations of creaking walls and thumping footsteps. Soon we learn that these sounds are actually amplified projections of live events taking place in real time within and around the pavilion, reminding us of the wide range of sound elements that combine to create a common ground of auditory experience.

The Romanian pavilion, meanwhile, contains a dark room filled with dozens of back-lit pedestals, some containing objects of graphic art (postage stamps) and others of bureaucratic process (architectural and other technical stamps), calling attention to some of the common but functional dichotomies of the creative and applied realms of planning and design. 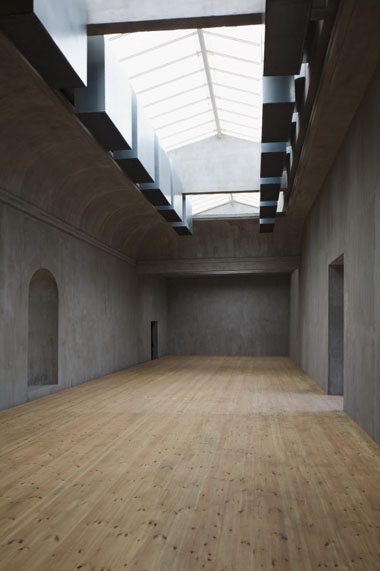 Acoustic space of the Polish Pavilion

A second group of exhibits approached the theme of common ground through an all out celebration of public spaces and the master planners and designers who create them. A collaborative effort between Norman Foster and filmmaker Carlos Carcas produced a dizzying multi-media collage of town squares, churches, stadia and other public places. Moving in a digital stream of images across the floor are the names of many of the prominent “common ground” architects, critics, designers, landscape architects and planners who helped bring them to life.

Similarly, the Brazilian pavilion commemorates the work of architect/urbanist Lucio Costa, whose concepts for the city of Brasilia helped define the ideology of Brazilian Modernism. Costa’s work is combined with some projects by contemporary architect and film director Marcio Kogan of Studio MK27.  The Russian pavilion employs a clever use of UR codes to tout the efforts of a prominent team of architects who are planning and designing a new Russian city for scientific and technological research called Skolokovo that will house 21,000 permanent residents.

A third point of view looked at the role of architects and planners as community-based common ground activists. The Japanese pavilion featured the work of some young designers whose collaboration with 2010 Sunami victims are helping to build hope and manifest progress in their community’s long road to recovery.  An exhibit from the island of Cypress outlines a proposition for community-based systemic planning that includes a full spectrum of tourism, education and economic development assets.  The curators of the American pavilion created a dynamic exhibit that celebrates the work of more than 250 young planners, architects, artists and citizen activists whose on-the-ground projects embody a shared sense of compassion, community awareness and civic responsibility. 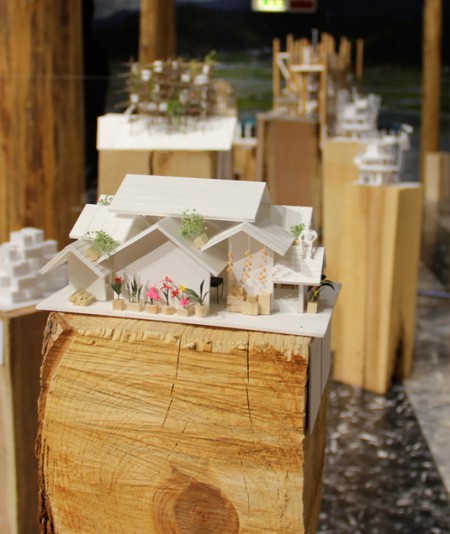 Of the many points of view represented at the Biennale, these three groups of exhibits embody some important insights into how architects and designers see their roles in the twenty-first century: first as concept artists, second as self-determined form makers, and third as facilitators and civic activists. But the search for solutions to the challenges of these turbulent times would be most effective if these seemingly divergent groups of ideologies were working together, where the common ground of familiar truth could meet up with the creative edge of discovery and innovation to create a new common edge of forward-looking ideology and civic responsibility. Here the best of abstract thinking can combine with the best of self-determinism and compassionate collaboration to deliver a new kind of common edge planning and design thinking that can address the most compelling social, economic and environmental challenges of our time.

The notion of building this new common edge of design thinking will be challenging, but federation building is a critical part of any quest for the greater good.  In his book The Rising Glory of America, 1760-1820, Gordon S. Wood discusses how some similar common edge concepts contributed to the design of our own complex democratic republic:

“More than any other kind of polity, republics required an absence of selfishness and luxury; their existence in fact demanded an extraordinary moral quality in their people, a moral quality that the eighteenth century, like previous ages, designated as virtue — that is, the willingness of the people to sacrifice their private desires for the good of the whole. “A Citizen,” declared Samuel Adams in a common exhortation of the Revolutionary years, “owes every_thing to the Commonwealth.” …This virtue, or the unselfish devotion to the collective good, represented all that men of the eighteenth century, from Benjamin Franklin to Jonathan Edwards, sought in social behavior. It was generally assumed that those most willing to forego their selfish interest for the public good were those who privately practiced a mixture of classical and Puritan virtues — temperance, industry, frugality, simplicity, and charity.

Another inspirational example of common edge thinking can be found in the philosophy of Ubuntu.  With its origins in the Bantu languages of South Africa, a translation of the concept means: “I am what I am because of who we are.” Nelson Mandela explained Ubuntu in the following way:

“A traveler through a country would stop at a village and he didn’t have to ask for food or for water.  Once he stops, the people give him food and entertain him.  That is one aspect of Ubuntu, but it will have various aspects.  Ubuntu does not mean that people should not address themselves.  The question therefore is: Are you going to do so in order to enable the community around you to be able to improve?”

Building towards a new and more virtuous common edge of design thinking will require some innovations in professional practice. The recent buzz around sustainable design and community engagement is a good place to start, but more innovation will be needed to sustain the level of change that can get us there from here.  Somewhere along the way many “either-or” design ideas will have to move closer to “both-and” design dialogues.  But if planners, architects, landscape architects, interior designers, product designers, civic activists and others can first agree to put our creative minds to the task we can find new ways to leverage our collective resources towards the common good.  Sounds complicated, but it is a goal worth achieving, and now, more than ever, is the time to make it happen.

Steven Bingler is the founder and president of Concordia, a firm that focuses on the planning and design of a wide range of community-based environments for living and learning. Concordia’s research alliances include the MIT Media Lab, Harvard University’s Project Zero, the University of New Mexico, the National Aeronautics and Space Administration, the Thornburg Institute, the Appalachian Education Lab, and the West Ed Lab.