What if…Veterans Could Solve the Farming Crisis?

For his inaugural column, architect and activist Andrew Burdick considers how farming could provide a way to help veterans transition back to civilian life.

Over the past 15 years of my career as an architect and design activist, I have come to believe that architects and designers can, and should, take a more active role identifying key challenges and opportunities facing our world. Titled “What If…?”, this series focuses on design opportunities and their potential impact.  Some articles will be first-hand accounts from my own work with Ennead Architects; others will focus on impactful questions that my peers are tackling. Still others will focus on questions we should, but currently aren’t, asking, questions at the  intersection of design and the public good.  At its core, it asks the fundamental question: “What if…?”

At our first meeting in 2014, Leora Barish, the founder of the non-profit Heroic Food, said something that struck me instantly: “For many veterans, the problem is not just finding a job. It’s finding a mission.”

Since 2014, Heroic Food has been dedicated to training and equipping U.S. military veterans for viable careers in sustainable agriculture.Their website explains the mission clearly: “Men and women returning from military service suffer a high incidence of unemployment, social dislocation, loss of sense of purpose, and reduced self-esteem. These stresses, with or without the presence of other disabilities, sometimes lead to profound discouragement and frustration. Although injury and trauma can play a large role in the difficulty of transitioning to civilian life, reintegration is also obstructed by the difficulty of finding fulfilling work worthy of their skills and dedication.”

According to a report released in 2011 by the The National Young Farmers Coalition, the median age of the American farmer is 57; by 2030, it is expected that 70% of the United States’ private farm and ranch lands will change hands, and almost one quarter of all farmers will retire . At the same time, there is a growing demand for local, sustainably-grown food, particularly that produced within 300 miles of large urban centers like New York City. To state it clearly, America needs new farmers.

What if these two issues could be solved in tandem?  What if farming could provide a way to help veterans transition back to civilian life? Could farming provide veterans with that critical opportunity: a new mission?

Judging from my past two years of collaboration with Heroic Food, I would say the answer to this question is unequivocally “yes.” As an architect and a designer, nothing excites me more than when two challenges become each other’s solution. 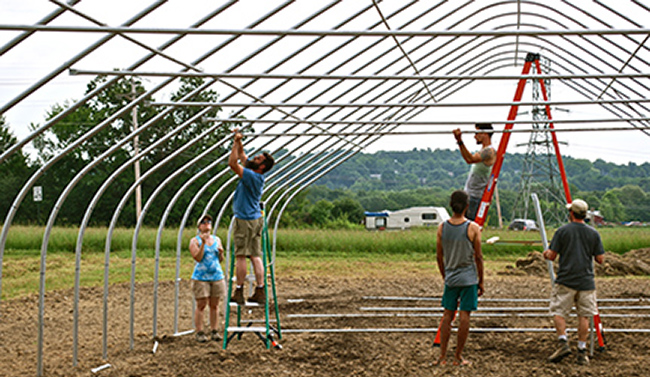 ​In 2014, our team at Ennead Architects partnered with RAFT Landscape Architecture to begin collaborating with Heroic Food to develop a master plan for the organization’s 18-acre farm in Columbia County, New York. The goal was clear: create a home for the first comprehensive, residential farmer training program exclusively for veterans.

Heroic Food’s design brief was not given as a series of needed spaces, but rather as a series of questions, which emerged as we walked the farm and discussed the organization’s mission and goals: Could the farm be designed in such a way to help veterans transition back to civilian life?  Can supportive, short-term housing provide more than shelter?  Could the design create an implied sense of community and encourage both formal and informal interaction between veterans and mentor farmers?  How might we create a ‘supportive place?’

To answer these questions, we developed a series of site strategies and program spaces that could integrate with the farm’s existing buildings, capitalize on the site’s incredible views, and lay lightly on the land, minimizing the new construction’s impact on the site. From the project’s siting to its walkway edge details, the design creates a sense of community while simultaneously supporting a sense of independence for each veteran trainee.

Forming an “L” configuration, the project creates a new edge from which residents can view the farm’s rolling fields and vistas.  A “community building” anchors the new project to the existing farm, joining two existing barns and forming a new courtyard and outdoor classroom space.  A raised teak deck hovers above the adjacent field, providing accessible connections and creating a community porch between the project’s eight residential units, the community building, and an old hay barn on the site.

From the beginning of our collaboration, it was clear that the design must be as economic and efficient as possible. This not only aligned with the overall vision and mission of Heroic Food as a sustainable agriculture organization, it was also integral to the long-term goal of directing as much funding each year directly to veteran-supportive programming. In other words, every dollar in energy costs and overhead that the buildings can save is a dollar that could be devoted directly to veteran training programs. 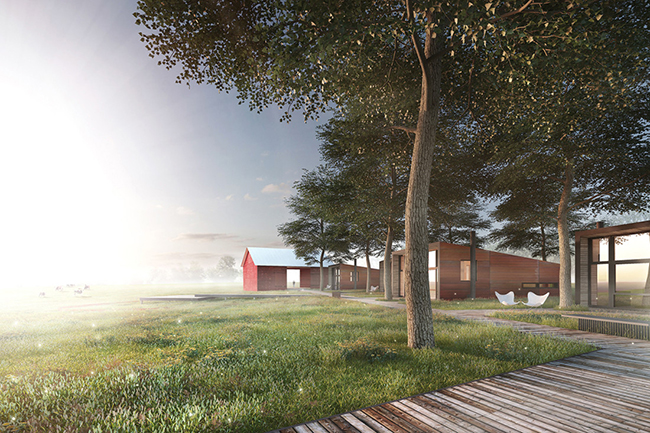 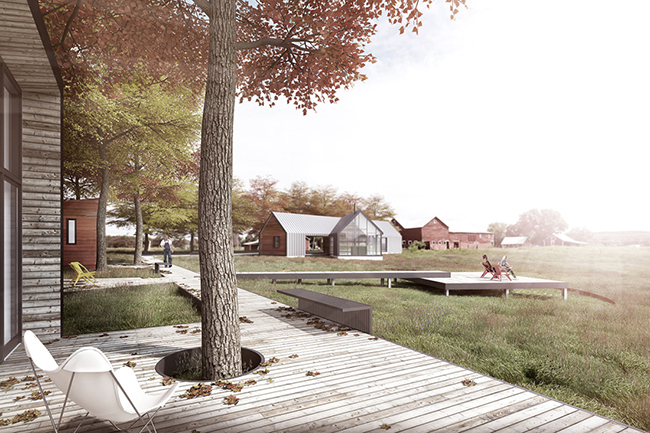 View from the housing units looking back to the Community Building

This project is about more than architecture or design. It is about creating an identity, a physical and organizational structure that supports the mission of Heroic Food. In recent months, this has also meant the development of a new visual identity for the organization, culminating in a new logo and graphic identity designed by graphic designer Aaron Draplin for CP+B LA.

By square footage, this project is modest. Its potential impact, however, is exponential. This project is not a bespoke design for a single farm in upstate New York; it is an architectural approach and a kit of parts for supporting farm training programs for military veterans at sites across the United States. Within a 20-mile radius of Heroic Food’s farm, there are over one hundred potential mentor farms.  Imagine the potential impact if every state had at least one of these farm-training centers and mentor farm training programs in place.  Imagine the opportunities for our veterans.  Imagine the possibilities for America.

Andrew Burdick is an architect and design activist. He is an Associate Partner at Ennead Architects and the Director of Ennead Lab, the firm’s research and design advocacy initiative. Ennead Lab actively applies architectural thinking to investigate challenging issues and intriguing design questions outside the traditional boundaries of architectural practice.

Heroic Food’s new logo creates a strong and easily-recognizable identity for the organization. 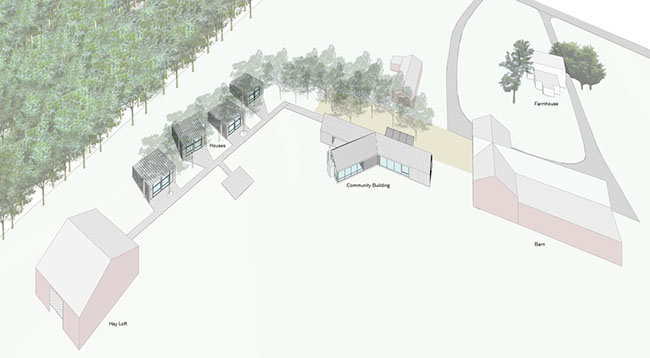