Why Cycle Cities Are the Future

No longer just for bike fanatics but a healthy, efficient, and sustainable mode of transportation alternative for urban planners

This article, by Simon Henley, originally appeared on ArchDaily as “Why Cycle Cities Are the Future.”

The 2010 launch of the “Boris Bike” – London’s cycle hire scheme, named after mayor Boris Johnson – was the clearest indication to date that cycling was no longer just for a minority of fanatics but a healthy, efficient and sustainable mode of transport that city planners wanted in their armory. There are now more than 8,000 Boris Bikes and 550+ docking stations in Central London. And the trend’s not anomalous to London: Wikipedia reports that there are 535 cycle-share schemes in 49 countries, employing more than half a million bikes worldwide.

However, the real question is: will cycling actually change the city? Will it result in new urban forms or, as the title of Australian academic Dr Steven Fleming’s new book predicts, a Cycle Space? Like Fleming, I believe so. I believe that cycling might just be the catalyst for a 21st Century urban renaissance.

Recently I took four weeks out of the office to cycle from Chicago to New York and to visit cities along the way. My 1,300-mile trip was part of a group expedition called P2P that went from Portland, Oregon to Portland Place in London (read more about it on portlandtoportland.org). The objective was to report back to the UK and London in particular on American city-cycling culture and the political initiatives that are emerging in the US. 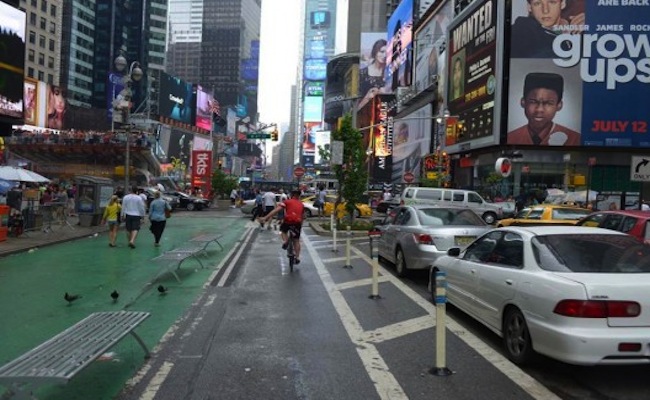 What impressed us was the speed of progress. When we were in Chicago at the end of June, the city launched its own bike share scheme. New York already has one. The docking stations bring tangible cycle infrastructure to the city streets. In-carriage and separated cycle routes have begun to proliferate. Disused railway lines are being harnessed as leisure trails, and in some cases these were working well for commuters too. Indianapolis had recently completed their “Cultural Trail,” an active transportation loop linking the five central city districts.

Towards the end of my trip, it occurred to me that this explosion in cycling ought to be put into an historic context, in order to enable the politicians and the public to recognize the scale of the opportunity, the change it might bring to our cities and our lives. 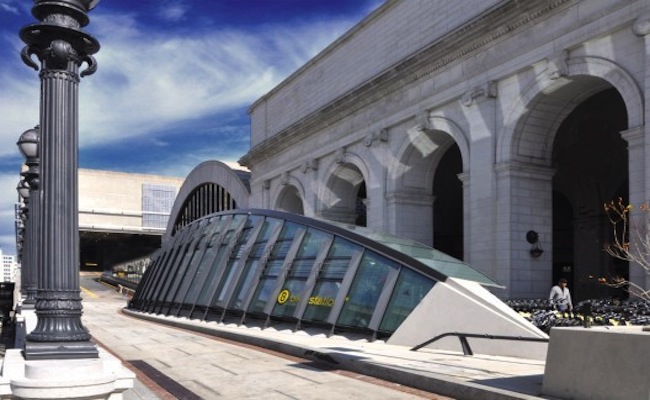 Take London in 1667, a year after the Great Fire of 1666. An Act of Parliament was passed that introduced building inspectors to ensure that buildings be built from brick and not timber (a law which predated the fire, but that hadn’t been enforced). Of course, the fire and resulting devastation meant that much of London had to be rebuilt, and that these buildings would be brick.

In the 20th-century, Corbusian modernism eventually had a monumental impact on London’s streets and skyline. Again the catalyst was in part a disaster – the havoc wreaked by the Luftwaffe and the need for rapid reconstruction – and the solution was political. The dilapidated terraced houses with their back yards and privies were associated with poverty and poor living conditions. Modernity, and the mass production of homes demonstrated optimism, and a commitment to those who had survived the war. It was a tangible dimension of the newly established welfare state.

Of course, the tabula rasa model wasn’t necessary. It was ideological. But it brought with it flats with fitted kitchens, bathrooms, and toilets. This prompted the gradual gentrification of the remaining streets. Indoor toilets were fitted, and bedrooms and sculleries were converted into bathrooms and kitchens in the surviving 19th-century housing stock.

But it’s the work of Joseph Bazalgette, the chief engineer of the Metropolitan Board of Works that stands out to me – not just for its contribution to public health but also for its potential parallels to Cycle Space. For much of its history London had been associated with poor living conditions and disease. By the late 1850s the scale of the city was making things worse: London’s sewage was deposited into the River Thames, out of which the city’s drinking water was being collected. Bazalgette’s solution was to construct a series of sewers that would run parallel to the Thames, both north and south of the river, collecting the sewage and ensuring the drinking water that was drawn from the river was clean. 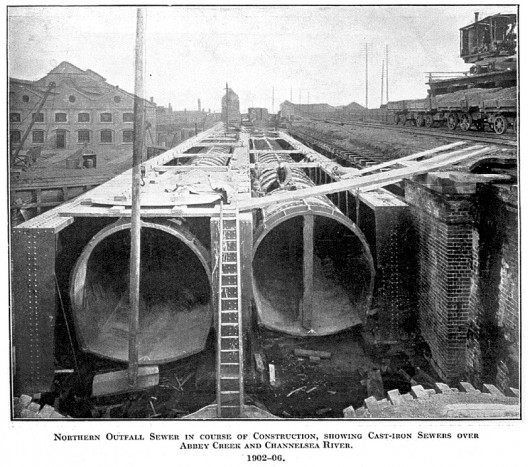 This monumental feat of engineering offers us the best precedent for the impact the bicycle might have on London or any city for that matter. Cycling offers us, for the first time in more than a century and a half, the chance to build an infrastructure that will bring with it significant public health improvements. In our auto-centric world, we have unprecedented levels of health problems – obesity, diabetes, etc. –all associated with our sedentary lifestyles. Cycling should mean a fitter population and a longer life expectancy, which would take pressure off the National Health Service and bring huge economic benefits. It would of course also reduce energy consumption.

From an architect’s perspective though, the question remains: what will Cycle cities be like?

The day of Margaret Thatcher’s funeral at St. Paul’s Cathedral gave me an indication. For security reasons, much of the Square Mile was closed to vehicular traffic; the streets were preserved for the pedestrian and the cyclist. What I remember about that day was the sense of calm, how quiet it was, and how generous the streets actually felt. For a brief moment the public realm was uniquely different. Imagine: whilst it may not be possible to ban the car outright, it ought to be possible to keep HGVs and delivery vans out during the day, when their impact on the physical environment and the safety of pedestrians and cyclists is most evident. 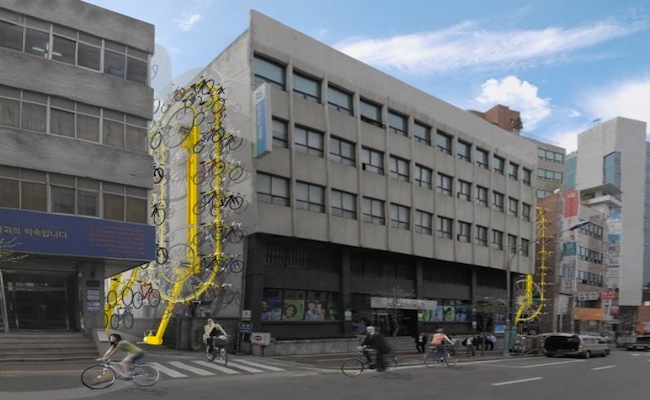 Bike Hanger, a proposal for Seoul. 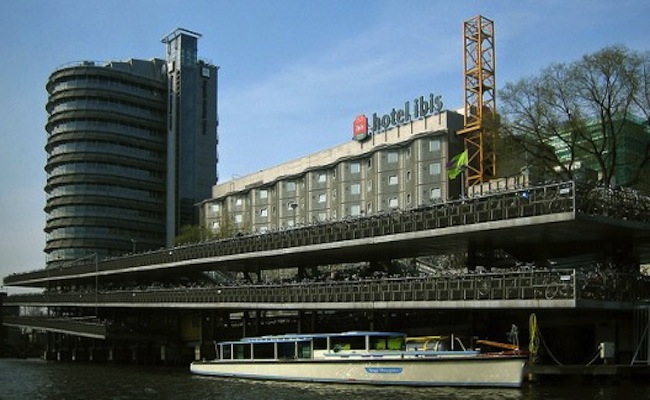 Imagine that the Boris Bike docking stations outside railway stations and in key public spaces might incorporate general cycle parking. Thus the Cycle City would bring with it a new building type – the multistory cycle park. Fietsenstalling, a multi-story cycle park outside Amsterdam’s Centraal rail station, with its Escher-like pattern of steel decks that suspend over the canal, is a dramatic model. Its very presence is didactic. It is persuasive.

And imagine if – instead of London’s Cycle Superhighways, currently only blue-painted tracks on the side of the road – London’s cities and villages were linked by a series of segregated active transportation routes? What might these be like? A scheme our firm designed in response to a competition in 1998 could serve as a good model. At the time, “Park + Jog” was treated as a curiosity; we still describe it as a “ utopian scheme.” But nowadays, it seems less and less fanciful.

It envisioned a 1km stretch of dual carriageway between Salford University and Manchester city center as a 4-lane linear park. One lane is grassed, another a water channel, another sand and the last a running track. Commuters leave their cars in a multi-story Car (P)Ark. The interchange also incorporates a suburban train station, cycle docking station, stables, and a boathouse and changing rooms. From the Car (P)Ark commuters head east into Manchester walking, jogging, cycling, rollerblading, horse riding, swimming or rowing. The park terminates at a Suit Park where commuters can shower, change and get a coffee. (The word “suit” refers to the business suit). Eight hours later, on their way home, commuters deposit their clothes and return through the park, to the interchange to collect their car or catch a train. The scheme could be extended to each of the radial routes into Manchester and at intervals these Parks could link, completing a comprehensive green commuter infrastructure. 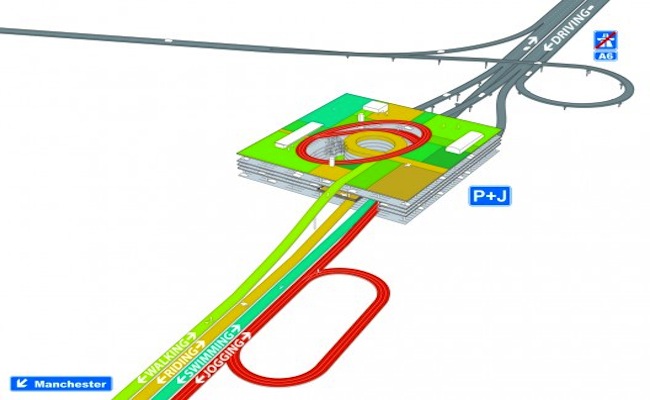 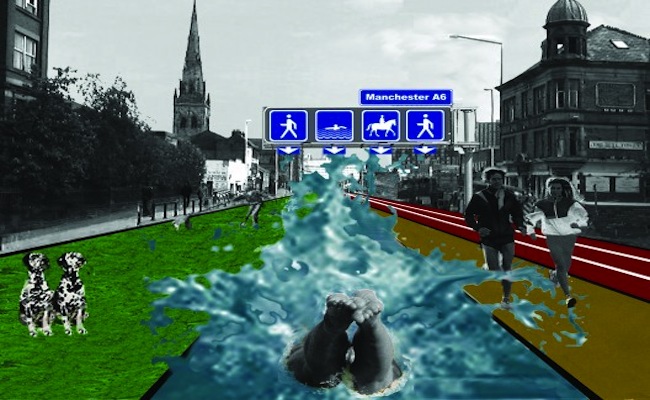 What is striking about these parks is the positive impact they can have on their surrounding neighborhoods, particularly when one considers the alternative. With roads, be they a dual carriageway or a street, come heavy traffic, noise, and pollution, at the expense of those who live and work around it. In the case of a High Street we forego certain types of shops, cafés, and restaurants that engender a street life. At the scale of the dual-carriageway the A40 that tears through west London illustrates beautifully how dramatic the blight on homes can be, as this mid-20th century residential avenue has been transformed into a slum wrapped around a congested commuter road. These zones lack the ‘density’ of the city center and the space of the suburb. And, each successive wave of greenfield development adds to the expanse of this grey space.

Active transportation routes and linear parks, on the other hand, regenerate their surroundings, bringing activity and value to blighted sections of the city. They also radically alter the political situation for the suburb and its inevitable commute. Of course, the creation of these green networks need not be at the expense of the motorist. On the 10th July London’s Transport Commissioner Peter Hendy launched a study for London that envisaged burying sections of the North and South Circular ring roads, and stretches of road close to the Thames. The initiative would create linear parks overhead, much as the Big Dig did for Boston. 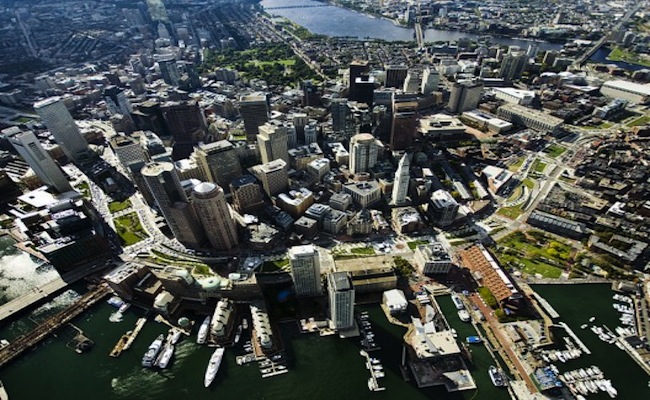 Aerial shot of the Greenway in Boston, after the Big Dig.

Although originally conceived for Manchester, I believe that Park+Jog may be adapted to any city worldwide and serve as an example for how Cycle Space could lay the ideological foundation to change our cities for the better. Combining new transportation methods that encourage the principles of a healthy life style with traditional roads can raise land values, attract investment, and activate the urban environment. The social revolution that Bazalgette offered London in the 19th century, Cycle Space might just bring to London and our world’s cities in the 21st.

Simon Henley is a teacher, author of the well-received book The Architecture of Parking, and co-founder of London-based studio Henley Halebrown Rorrison (HHbR). His column, London Calling, looks at London’s every-day reality, its architectural culture, and its role as a global architectural hub; above all, it will explore how London is influencing design everywhere, whilst being forever challenged from within. You can follow him @SiHenleyHHbR and be a fan of his Facebook page, HHbR Architecture.