A former member of the flood protection authority in New Orleans explains why legal action is being taken against the petroleum industry operating in the Gulf of Mexico. 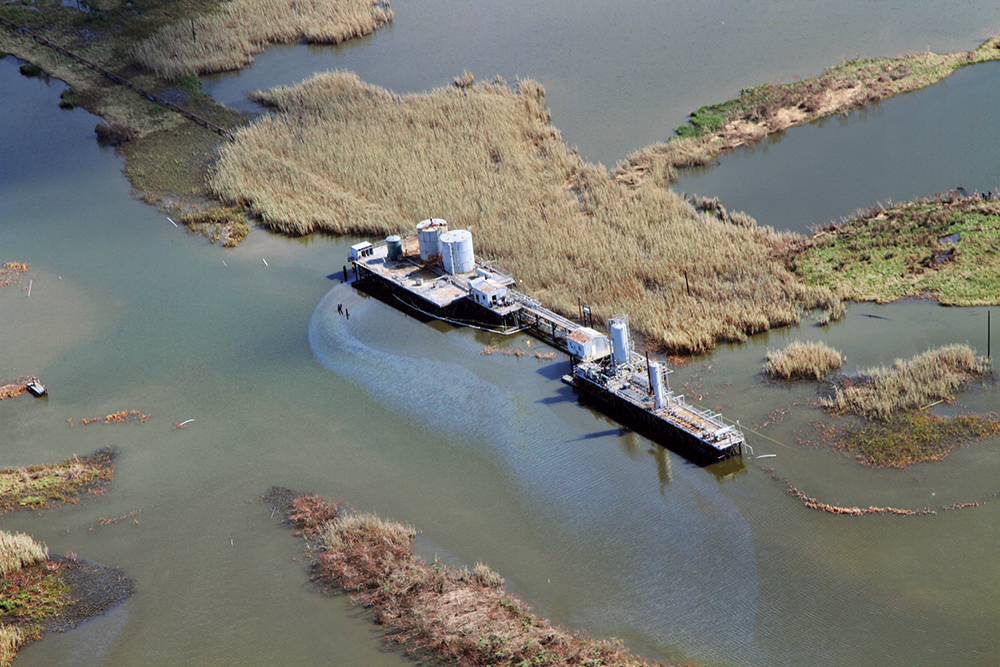 A leaking oil facility in the Pass-a-Loutre Wildlife Management Area. Production facilities like this, along with the barge traffic that they create, have helped degrade the wetlands of southern Louisiana. These protective wetlands are disappearing at a rate of about a football field–size area every 50 minutes.

Architecture fits human society into a place. In most instances, that “place” is at least relatively stable, although both it and the society that makes a home there may have to adjust to each other. In and around New Orleans, however, humans chose to develop a society and make homes in one of the most impermanent and environmentally dynamic places in the world. That society has not only failed to adjust to its environment, but has exacer-bated the place’s natural dynamism.

In essence, New Orleans is not much more than a mud castle surrounded by a roil of water, but only in the wake of Hurricane Katrina did people living there begin to recognize that reality. And only this past July did any public entity take a concrete step to address the problems that humans themselves created. That’s when the Southeast Louisiana Flood Protection Authority-East (SLFPAE)—the levee board responsible for protecting metropolitan New Orleans on the east bank of the Mississippi River—filed a lawsuit against ExxonMobil, Chevron, BP, Shell, Marathon, and 92 other oil, gas, and pipeline companies. What’s at stake in this lawsuit is the future of much of coastal Louisiana, including its port traffic (18 percent of all commercial shipping in the United States passes through Louisiana) and energy infrastructure (roughly 20 percent of the nation’s oil refining capacity).

Until mid-October, I was vice president of the SLFPAE and one of the architects of the lawsuit, an action that is the culmination of geologic history, engineering, and law—and which has opened up great seismic faults that are shifting politics in Louisiana.

No serious person, including those in the  fossil fuel industry, disputes that oil and gas operations have caused substantial land loss.

First, the geology: The Gulf of Mexico once reached north to Cape Girardeau, Missouri. As the sea level fell, the Mississippi River system built land from there to the present mouth of the river by depositing sediment into what had been water. In total, the river built approximately 40,000 square miles of land in seven states, including all of coastal Louisiana. There are no rocky cliffs on Louisiana’s coast; the entire shoreline is basically sediment held together by plant life. In Louisiana, the most densely populated areas are inland from the Gulf itself inland from the mix of water and earth that is called marsh. In the New Orleans metropolitan area, people live within a levee system as well.

Second, the engineering: Multiple human triumphs—at least they seemed so when accomplished—have been destroying this coast for decades. Approximately 1,900 square miles of land have melted back into the ocean, and land loss is continuing at the rate of about one football field–size portion every 50 minutes. Causes of the land loss include the construc-tion of the levee system, which prevents river sediment from replenishing the land it made by flooding; the decline of sediment in the river—the river now carries less than half its historic sediment load and just six dams built by the U.S. Army Corps of Engineers on the upper Missouri River retain about half of all that missing sediment; various engineering works built to benefit the shipping industry, including the Gulf Intracoastal Waterway, which runs from Texas to Florida; and jetties that extend two and a half miles out into the Gulf and escort half the sediment remaining in the river into deep water where it is of no use replenishing the land.

There is also one other major factor in land loss: the operations of the oil and gas industry. The industry has dredged about 10,000 miles of canals and pipelines through coastal Louisiana, every inch of which has allowed salt water intrusion, changed salinity, interfered with natural hydrology, and killed plant life—thus leading to the erosion of land.

No serious person, including those in the  fossil fuel industry, disputes that oil and gas operations have caused substantial land loss. A U.S. Geological Survey (USGS) study in which industry scientists participated concluded that energy industry activities accounted for 36 percent of all the state’s land loss. Evidence is growing that oil and gas companies have extracted so large a volume of material that the land has actually sunk; the impact of Big Oil’s role in subsidence may not be entirely reflected in the USGS study. 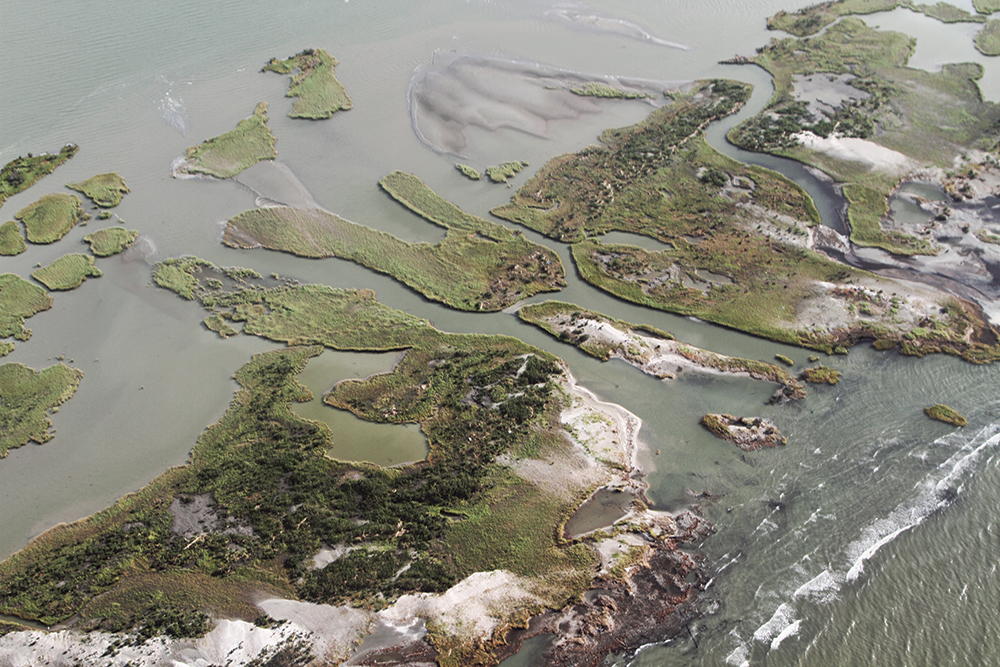 In this photo, taken by the Gulf Restoration Network following Hurricane Isaac in 2011, a barrier island in Barataria, Louisiana, “transgresses,” or moves inland, one storm at a time. The islands are further threatened by rising sea levels.

Now, finally, the law: The SLFPAE filed suit because of this land loss. Its argument is simple—and essentially irrefutable. Even the suit’s opponents don’t dispute the reasoning. There is a slogan down here: “The levees protect the people, and the land protects the levees.” The lost land once served as a buffer, which protected metro New Orleans from hurricanes by cutting down storm surges; without that protection, more devastating storm surges pound against the levee system. The increased—and increasing—storm surges require the levee board to spend more money to protect lives and property. No one disputes this either.

The board’s case is further strengthened by two facts: Most industry operations were conducted under permits, and those permits required the companies to minimize the damage they caused and restore the land when they were done. Beginning in 1985, Louisiana law imposed virtually identical requirements. (No one in Louisiana ever bothered to enforce any of this language; however, the oil and gas companies did honor both the permits and the law in the breach.) In addition, Louisiana jurisprudence is based on civil law, as opposed to the common law tradition of the other 49 states. In civil law there is a doctrine called “servitude of drain,” which prohibits one party from altering the natural flow of water on another party’s property. To the extent they increased storm surge, oil and gas operations did just that.

The board is suing to get the industry to restore the land it destroyed or, in places where this is impossible—where what was once land is now open water and no sediment is available for restoration—to compensate it so it can augment the flood-protection system. That will likely cost billions of dollars.

More importantly, the SLFPAE’s area has suffered less damage from the oil and gas industry than has any other part of the Louisiana coast. If other entities farther south follow the board’s lead, the industry’s liability rises to several tens of billions.

Thus we get into politics. Not surprisingly, the lawsuit—and the very question of “place”—is shaking Louisiana politics. People used to say, “The flag of Texaco flies over the Louisiana capitol.” We’re in the process of seeing whether that’s still true. Hours after the lawsuit was filed, Governor Bobby Jindal— at the time, he happened to be at an event in Aspen with such donors (and defendants) as the Koch brothers demanded it be withdrawn. If it wasn’t, he threatened, he would gut the board and seek legislation to kill the lawsuit when the state legislature meets in March of 2014.

The board refused to withdraw the suit, and he has tried to gut it. But the SLFPAE was created after Hurricane Katrina by reformers who insulated it from political pressure by making sure that, unlike nearly all other boards in the state, its commissioners do not serve at the governor’s pleasure. Jindal has nevertheless been able to replace three members, including me, because our terms expired, and the three new appointees passed a “litmus test” of opposition to the suit. But a 6–3 majority of the board still supports it. That majority has resisted tremendous pressure to cave in, and I am confident it will continue to resist that pressure. Now what happens to the lawsuit will be determined as much by state legislators as by the courts.

Initially, no elected official spoke up for the lawsuit. Many condemned it. It looked like we had no chance of surviving the legislature. But the logic of our arguments, and the illogic of the governor’s, seems to be eroding his position even faster than the sea is eating away at the coast.

Our lawsuit is designed to provide funding for the Master Plan, not to interfere with it.

Garret Graves, Jindal’s point man on the issue, has warned that the suit will cost jobs, end cooperation with the industry, and interfere with the state’s Master Plan to restore the coast—a plan with a $50 billion price tag for a bare-bones effort and $100 billion to do it right. But everyone knows the oil industry will operate in Louisiana as long as there’s oil in Louisiana, and the Master Plan has one great weakness: there is no funding for it. Our lawsuit is designed to provide funding for the Master Plan, not to interfere with it. True, the industry is cooperating in many areas and, true, that cooperation is worth millions of dollars a year. But with liability in the tens of billions, that amounts to letting the industry off for less than one-tenth of a penny on the dollar. Even in Louisiana, that’s a sweet deal.

Meanwhile, not only do the state’s arguments against the suit make no sense, Graves himself has been making our case for us. First, he conceded by telling local newspaper the Advocate, “I’m the first one to admit there’s liability there. The scars are on the land.” Then, a couple months later, he said, “Businesses should be operating in compliance with existing regulations.” Exactly what our lawsuit demands. Remind me, Mr. Graves, why the state opposes the suit?

Soon after we filed our lawsuit, James Carville told me that we had permanently changed the political conversation in the state. As I write this today, Jefferson and Plaquemines parishes filed their own lawsuits against oil companies. Both parishes are heavily Republican, and Jefferson has the second largest popu lation in the state with the best-organized delegation in the legislature. I expect more parishes to file lawsuits in the future. This place may have a chance to survive after all.

John M. Barry is the author of Rising Tide and the former vice president of the Southeast Louisiana Flood Protection Authority-East (SLFPAE).