“Would You Like Ear-Splitting Noise and Migraines With Your Order?”

“I said Mayor Di Blasio ought to take up the gauntlet on sound abuse in restaurants the same way Bloomberg did with his smoking ban.”

I was dining in a trendy lower-Manhattan eatery recently, and trying to discuss an old New York Times article on the “Unabated Roar” New Yorkers face at many clubs and restaurants. Unfortunately, the surrounding din rendered my logic moot as well as mute.

Loudness issues have been a sore point with me for years, and not only in restaurants. Not long ago Congress passed the CALM Act, which prohibits commercial advertisers from raising the volume on their messages beyond the level set by viewers for their personal listening comfort. Hard to imagine broadcasters intentionally flouting the law, but I know I continue to encounter CALM infractions in my channel-surfing expeditions. ​More locally, in New York, the city’s Board of Health monitors and grades restaurants on their kitchen’s cleanliness, but does nothing to mitigate the noise pollution produced by these venues.

While many people complained bitterly about the restaurant smoking ban, non-smokers supported it vigorously. Although restaurant and club owners expressed deep concern about the negative income impact they anticipated when customers were unable to light up after a meal, or during a beer, none of those fears were realized. And, look at all the money they’re saving on matchbooks.

The deafening restaurant blare grows louder and louder as people increase their volume to make themselves heard over the continually amplifying clamor. It’s a classic lose-lose situation. However, this problem can be easily and cost-effectively controlled by applying appropriate acoustical treatments to walls, ceilings, and even booth seating. Imagine people talking to their hearts’ content at dinner without having to outshout each other over their pasta. That’s sounds like a pretty appetizing concept to me. 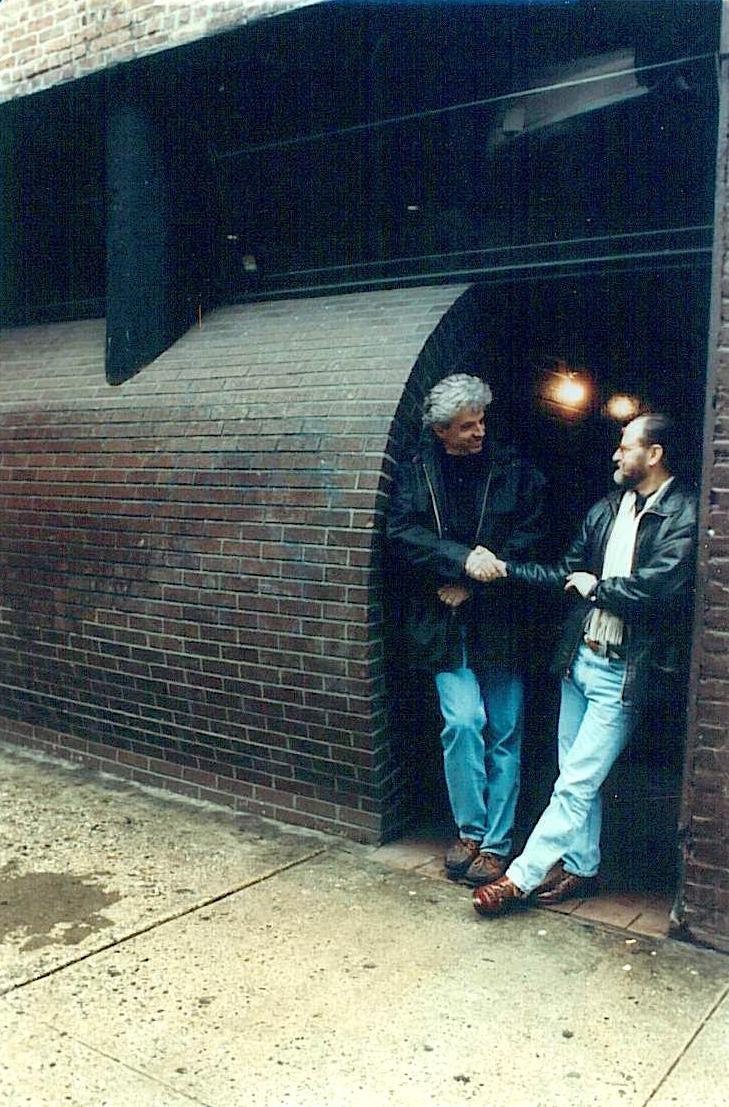 Storyk designed the Electric Lady Studios in the Village, among other important recording and performance venues. Here, he stands with Jimi Hendrix producer/engineer Eddie Kramer in the studio’s original iconic doorway on 8th Street.

I’m particularly sensitive to noise issues, as hearing is the focal point of my livelihood as an architect and acoustician. Many highly effective “fixes” are available to dampen and actually eliminate excessive ambient noise today. And, implementing them does not need to break restaurant and club owner budgets.

For example, thanks to “psychoacoustics inspired Residual Pitch” technology, club owners can now “trick” their customers’ brains into perceiving the pitch of a tone by the ratio of its higher harmonics. That is, they can make music seem louder without actually raising the volume to painful, damaging, or neighbor-annoying levels.

The Hirslanden Cardiac Clinic by WSDG Europe—an effective way of dampening noise in restaurants and other venues.

A business associate of mine says, “Architects should design with their ears as well as their eyes.” The U.S., in general, lags far behind the E.U. in terms of establishing comprehensive programs for dealing with excessive noise. Concerts, restaurants, clubs and other venues are inspected regularly, and excessive noise issues are promptly resolved according to E.U. regulations. I propose that mayors across the U.S. introduce a compulsory ban on excessive noise in clubs and restaurants. The resulting fines and penalties should appeal to their cities as a windfall benefit of this legitimate, quality-of-life enforcement issue.

Hearing may be the only one of our five senses people take for granted, until their hearing is diminished. By educating or legislating restaurant and club owners to the importance of noise control, local governments may inspire an international fix to an insidious and vociferous problem. Then, maybe we can figure out a way to “tone down” those ear-piercing sirens.

John Storyk is an architect, acoustician and co-founder of Walters-Storyk Design Group.