Dallas’s local architecture critic leads a campaign to tear down a highway in the autocentric city. 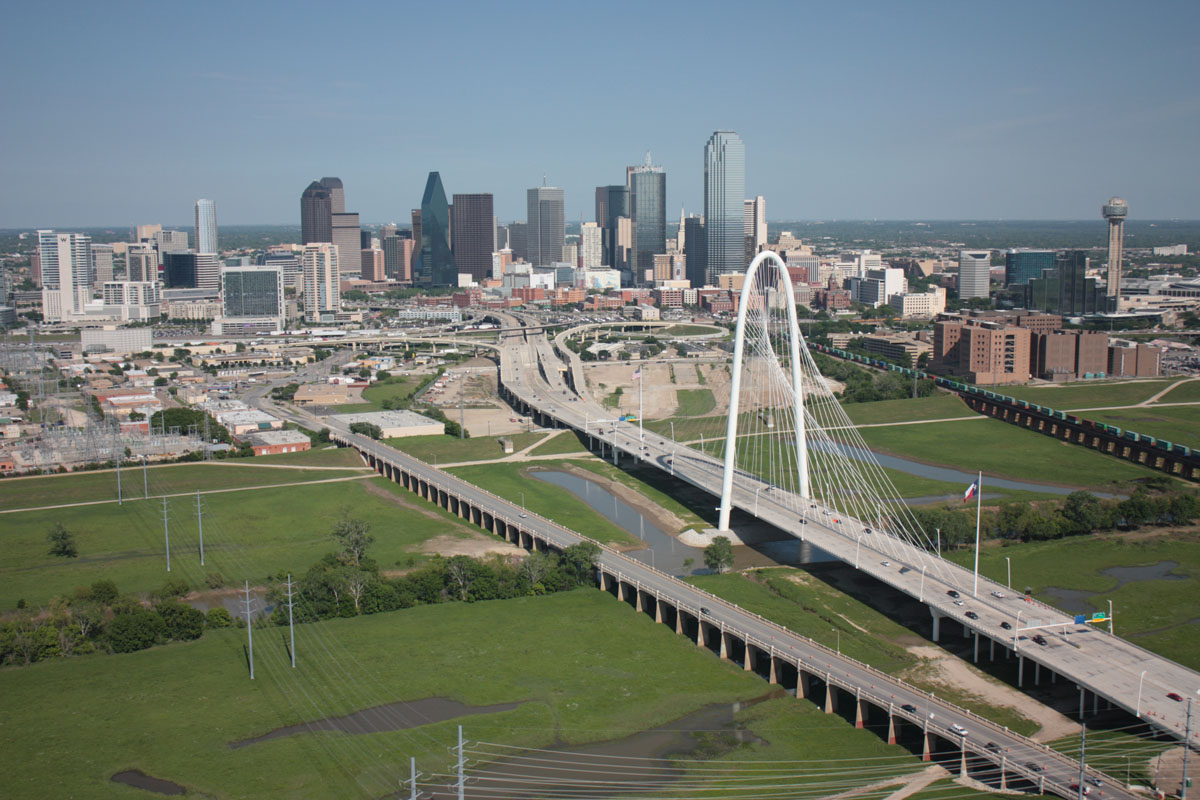 A couple of months ago, an editor pulled me into an office at the Dallas Morning News, anxious to show me his latest find on eBay. For a pittance, he had acquired a few minutes of film shot in downtown Dallas in 1939. Here was the city, in the glorious saturation of Kodachrome, as I had not seen it before: streets crammed with men and women going about their business, streetcars jockeying for space, blinking neon theater marquees, vistas so dense with buildings they could easily be mistaken for Manhattan.

Dallas doesn’t look like that anymore. In the postwar years, those crowds seemed less a sign of urban vitality than a lethal hindrance to efficiency, and, in the name of progress, the city devoted itself fully to the automobile. If you look at a map of the city today, you will see the result: Downtown Dallas is now enclosed by a ring of highways, a concrete noose that has choked off its once-lively streets, replacing them with a checkerboard of parking lots, garages, and vacant buildings.

Almost two years ago, when it opened a deck park over a sunken stretch of that highway ring, the city got an idea of just what might happen if you were to cut this noose. Klyde Warren Park—named for the adolescent son of a local billionaire, who paid for the privilege—gave Dallas a new front lawn, one that sutured the city together and proved a boon to the burgeoning neighborhoods beside it.

The success of Klyde Warren has served as the backdrop to an even more audacious proposal, one that would knock down a segment of the highway noose rather than cover it over. The idea, developed by Brandon Hancock and Patrick Kennedy, a pair of New Urbanist planners, would dismantle a dilapidated section of elevated highway, IH-345, that cuts off downtown from Deep Ellum, a historically black commercial and entertainment district, and residential East Dallas beyond.

The proposal was prompted by the precarious state of that elevated stretch of road. According to the Texas Department of Transportation (TxDOT), its repair will cost roughly $100 million. Why spend all that money when a teardown would leave some 187 acres free for development, a potential windfall in tax revenue? Why not reknit the city fabric by removing an impassable stretch of on-and-off-ramp spaghetti?

Downtown Dallas is now enclosed by a ring of highways, a concrete noose that has choked off its once-lively streets, replacing them with a checkerboard of parking lots, garages, and vacant buildings.

Last October, with TxDOT still dithering about its plans for the road—a tear-out was not an option it was even considering—I wrote a long article in support of the tear-out for the Dallas Morning News, knowing full well that the idea of removing a highway in Dallas was still something close to apostasy. The car here is understood as an instrument of personal freedom and independence, even as we often find ourselves at its mercy, and never mind that its infrastructure requires enormous public spending and debt.

That article received upward of 140 comments, an impressive number for a story in the arts section of the paper. Most gratifying was that there were as many in favor of the proposal as there were opposed to it. Dallas, it seemed, was ready for a serious conversation about its infrastructure, and how it shapes the life of the city.

Managing that discussion has proven a distinct challenge. I am by nature and profession a critic and a historian, not an activist, and it has been a curious experience to find myself somewhere near the front lines of a cause, and stranger still, being a Modernist, to be stationed at the barricades alongside local champions of the Congress for the New Urbanism.

But one of the first rules of politics is that you take your allies where you can find them, and, in cities today, New Urbanists and Modernists are not such strange bedfellows, despite years of rhetorical jousting. The progressive dream of a pedestrian-friendly, dense urban core with an active street life is one shared by both of those constituencies, and achieving it requires cooperation.

The activist role has also required the mastery of a different kind of language. Being a rationalist, my first inclination in defense of the tear-out has been a straightforward appeal to logic. To the chief objection—where will all the traffic go?—my response is that it will normalize easily, as that is what the best evidence suggests. A majority of the road’s traffic is actually not traveling to downtown and could be rerouted to avoid the core. Moreover, the road’s capacity would not be eliminated, but replaced by an arterial system that might improve traffic conditions by offering more on and off points. We have seen in Buffalo, Milwaukee, San Francisco, Seoul, and even car-centric Los Angeles, that the fears accompanying the loss of highway capacity have proven unfounded.

Yet fear is a powerful force, and it requires something more than a purely rational argument to carry the day. This has led to some uncomfortable moments. If you’d ever like to experience the feeling of complete inadequacy, try speaking at a public forum after a couple of practiced Southern Baptist ministers.

Everyone in Dallas will benefit from a regenerated, walkable core, and none more than those citizens who are forced to commute long distances from south to north on a daily basis.

But with their assistance, and with a growing coalition of supporters, logic does seem to be making headway. The business groups that have traditionally determined the course of Dallas planning and development have expressed considerable enthusiasm. I took it as a sign of momentum, in March, when one of my colleagues at the paper wrote a reactionary column in opposition, describing a “crazy town” plan that was “about the silliest notion to come along in years” and “a time waster and nothing more.” Predictably, it had precisely the opposite of its intended effect, drumming up even more attention and galvanizing supporters.

Some of the ensuing commentary was less amusing. Michael Morris, one of the region’s leading transportation officials, injected a racial component into the debate, claiming—inaccurately—that the plan’s proponents were “all white,” “very wealthy,” and not residents near the highway. He would later retract this statement, or at least parts of it, but it effectively reframed the discussion. How could the city justify the removal of the principal commuting corridor used by poor, predominantly black South Dallasites to the wealthy, predominantly white areas of North Dallas? From a certain angle, the tear-out could indeed be read as another act of exploitation, with wealthy North Dallas real estate interests enriching themselves at the expense of African Americans.

That, of course, is a distorted picture. Everyone in Dallas will benefit from a regenerated, walkable core, and none more than those citizens who are forced to commute long distances from south to north on a daily basis. Driving is a regressive tax on the poor and a burden on all taxpayers.

What will happen with IH-345 remains an open question. As it stands, the mayor has taken a Solomonic position, arguing for the necessary repairs to the road while keeping the demolition plan on the table. (The editorial board of the Dallas Morning News also has endorsed this position.) TxDOT now understands that it is a proposal with which it must reckon.

Perhaps more critically, the idea that the city needs to rethink its highway system has taken hold. Now competing with the plan to tear out IH-345 is another to sink and deck-over nearby I-30. Meanwhile, opposition continues to grow against a proposed toll road that would run inside the levees of the Trinity River floodway, cutting the city off from its greatest natural resource. Building that road would be an act of apocalyptic foolishness, one that the city would regret for generations. But the IH-345 debate suggests Dallas has woken up to the reality that continually adding capacity in an endless effort to reduce congestion is a fool’s errand, and one with human, urban, and financial costs that are simply too high to bear. In Texas, where government spending is anathema, that is a powerful argument.