Big Ideas from the 2014 Bruner Loeb Forum in Boston

2014 Bruner Loeb participants considered the intersection of design and equity.

Equity has been a common thread among Rudy Bruner Award winners over the years. Winners like 2013 Silver Medalist Via Verde illustrate the power of placemaking to tackle big challenges facing American cities like the need for affordable housing.

Last month, 125 professionals from diverse fields—design, community development, the arts, urban planning, philanthropy, advocacy, and city government—joined us in Boston to consider Design for Equity at the annual Bruner Loeb Forum. The 1-1/2 day event was sponsored by the Bruner Foundation and the Loeb Fellowship at Harvard Graduate School of Design, in partnership with Enterprise Community Partners, Codman Square Neighborhood Development Corporation and the Boston Redevelopment Authority. 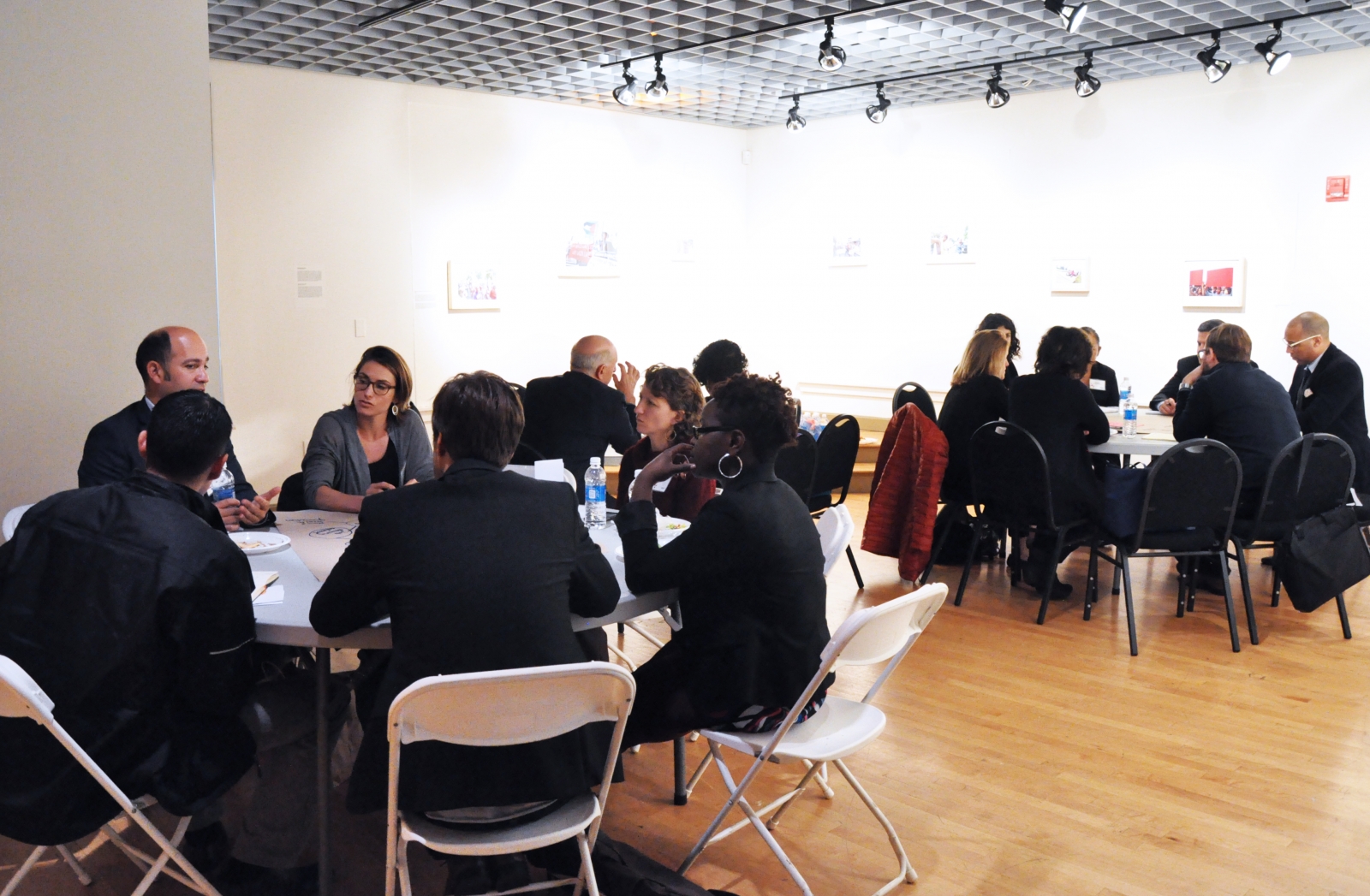 The interactive forum provided a platform to consider the increasing economic and social disparity in our cities and explore how design can contribute to greater equity and opportunity for everyone. We were excited to explore the topic of equity in Boston, as the issue is a growing concern and is central to newly elected mayor Martin Walsh’s agenda.

The forum began with a neighborhood tour of Dorchester, where we learned about local community development efforts like the Fairmount Indigo Planning Initiative—a plan that will increase access to affordable rail transportation between downtown Boston and predominantly lower-income neighborhoods. That evening we gathered at Boston University’s Initiative on Cities for presentations by the outgoing class of Enterprise Rose Architectural Fellows, who shared their work with community-based organizations in Boston, Burlington, VT, Detroit, Saint Paul, MN, and Yakima, WA. Initiative on Cities executive director Katherine Lusk referred to Boston’s late mayor Thomas Menino, his work as the Initiative’s founding co-director, and his belief in the “importance of investing in physical and social infrastructure of cities.” 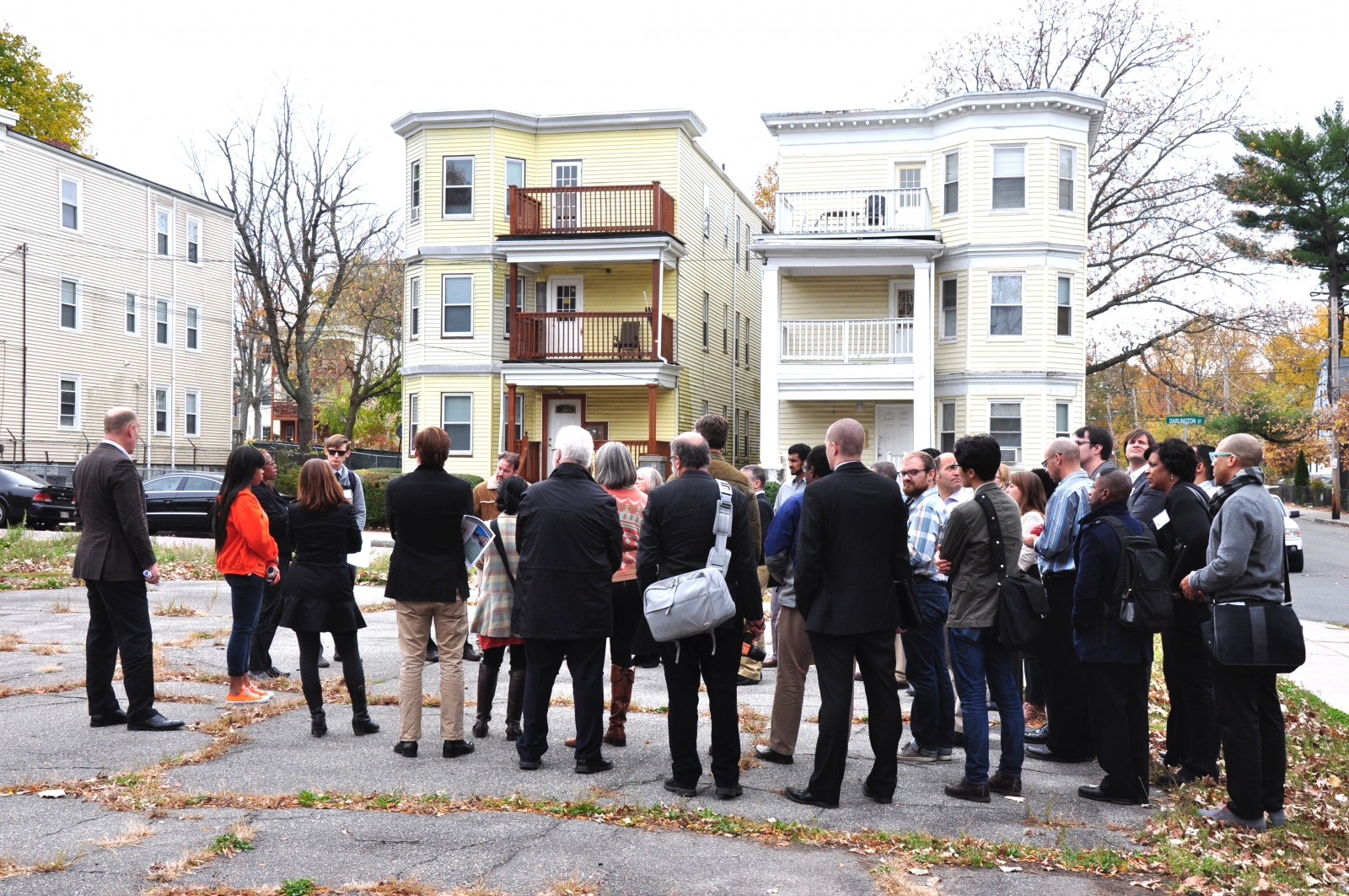 Neighborhood Tour
A tour of Dorchester highlighted community development initiatives that are increasing access to employment, housing, and green space for local residents.

The next day we gathered at Villa Victoria Center for the Arts, the headquarters for Inquilinos Boricuas en Accion, a Boston-based community action organization founded in the South End in 1968 to develop low- and moderate-income housing to preserve Latino artistic expression. John Barros, chief of economic development for the City of Boston, offered a “state of the city” concept, explaining that while Boston is enjoying a period of unprecedented growth, it is also one of the fastest gentrifying cities in the country—80% of the construction cranes in the city are building luxury housing. He proposed that equity is about “enabling all residents to engage in the prosperity of the city.” 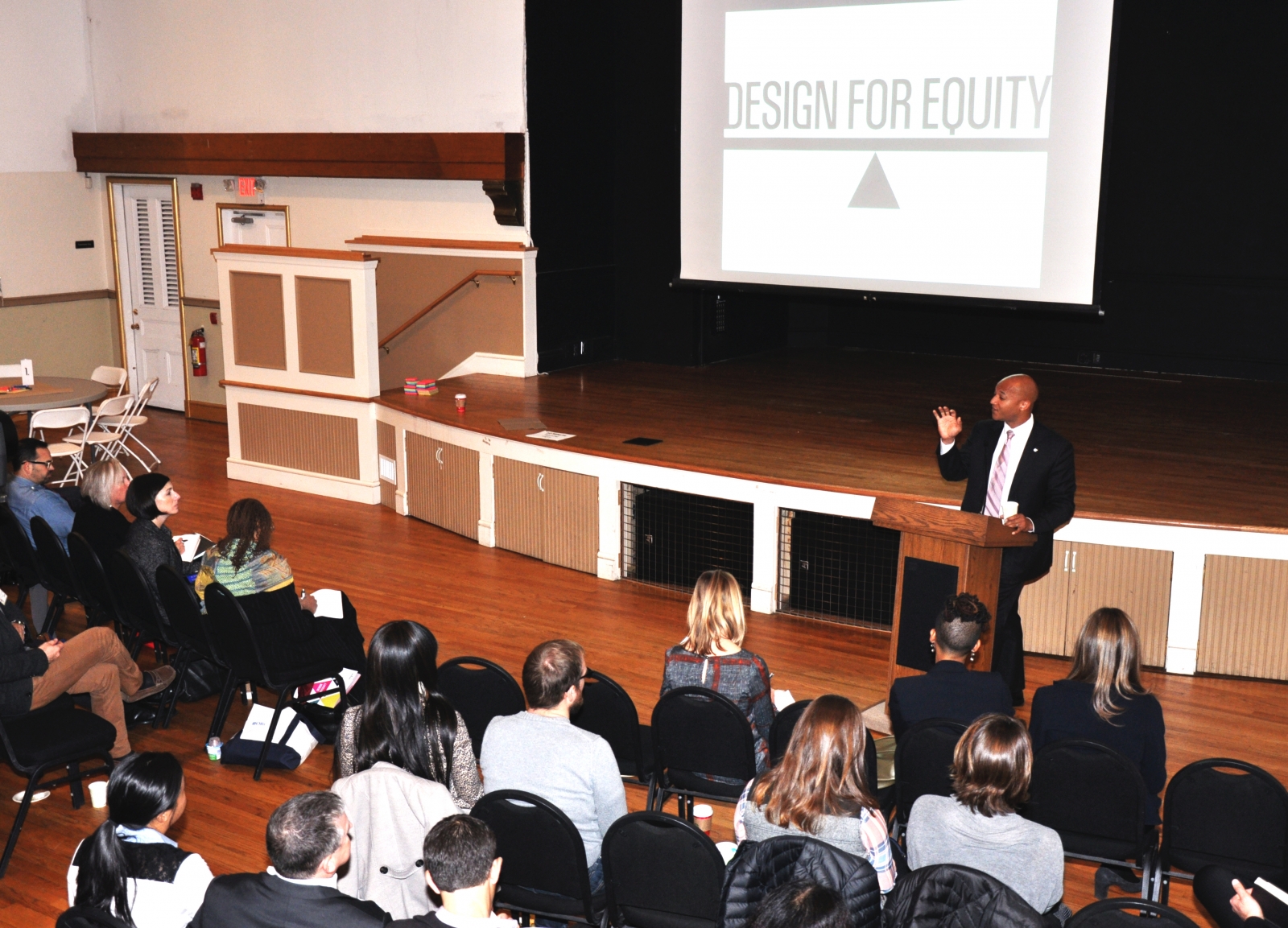 John Barros, Chief of Economic Development for the City of Boston, kicked off the conversation by providing a “state of the city.”

Over the course of the day, we exchanged facts and ideas about how to define “equity,” and examples of place-based initiatives in the Cleveland, Minneapolis, New York City, Pittsburgh, Portland, and Santo Domingo, NM. Common themes included the importance of “leveling the playing field”—providing access to opportunity, including power and choice, and the value of education and knowledge, and engaging people in the process. The day concluded with a series of energetic and creative group presentations by participants who shared what “equity” meant to them. Roger Cummings acknowledged the value of “civic self-determination,” and Alexie Torres Fleming proposed that the term is about “creating space for people to set their own tables.” 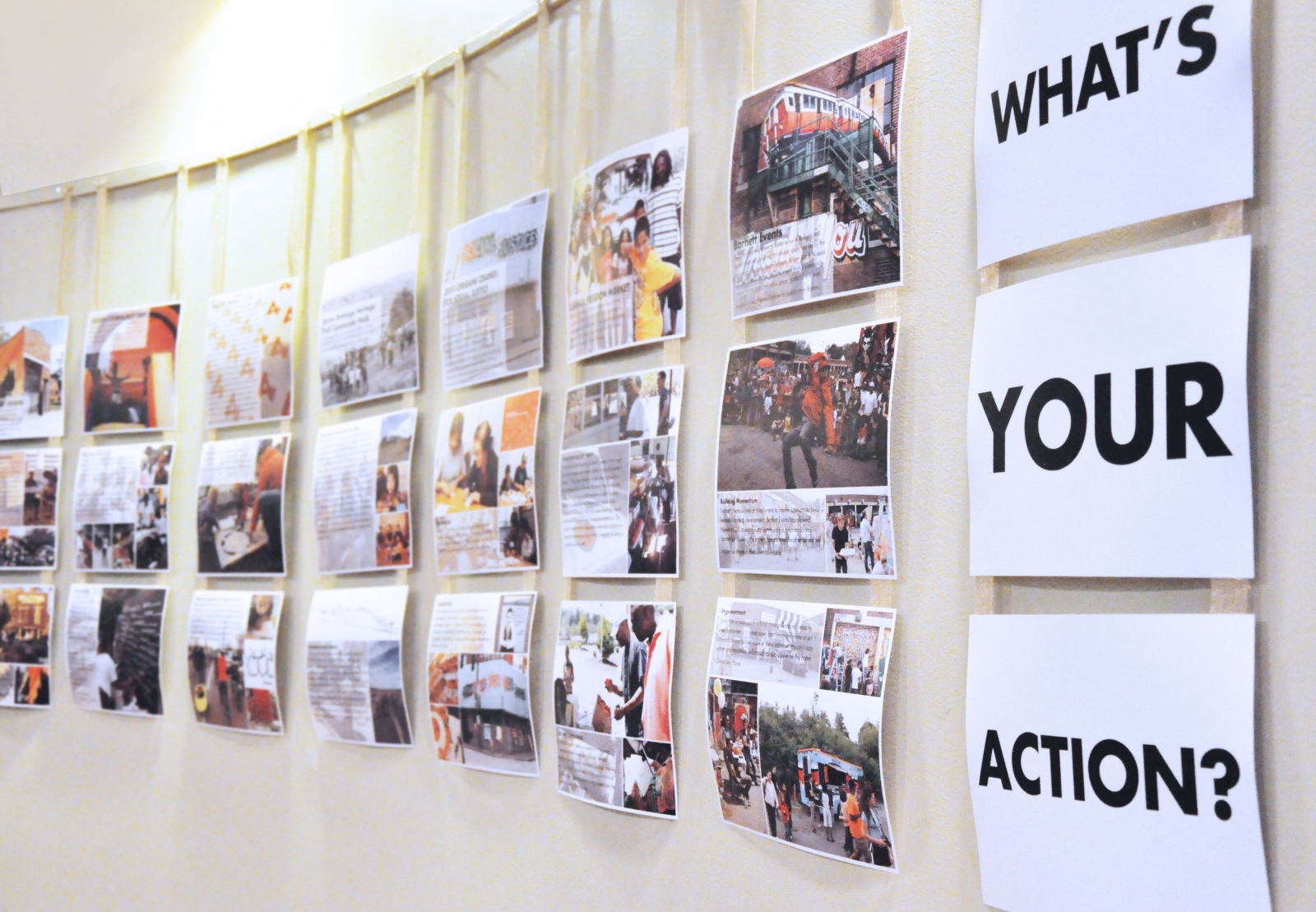 What’s Your Action?
An exhibit produced by Enterprise Community Partners in collaboration with Rose Architectural Fellows explored the value of collaborative action.

The forum concluded with a key note panel at Old South Meeting House in downtown Boston with a welcome from Mayor Walsh, who remarked that “sharing ideas will change the future.” He highlighted the role of cities as laboratories of innovation, citing his work as vice-chair of the U.S. Conference of Mayors Cities of Opportunities Task Force, the creation of Boston’s first Cultural Plan and an ambitious housing agenda that includes the goal of building 53,000 new housing units in the next ten years to ensure “a city for all that can house all.” Nigel Jacob, co-chair of the Mayor’s Office of New Urban Mechanics, moderated a panel discussion with Rick Lowe, founder of Project Row Houses (1997 Rudy Bruner Award Silver Medalist), Marc Norman, director of UPSTATE, a Center for Design Research and Real Estate at Syracuse University School of Architecture and current Loeb Fellow, Geeta Pradhan, The Boston Foundation, and Theresa Hwang, community architect at Skid Row Housing Trust. Ultimately, as Geeta Pradhan suggested, one way to think about equity is to consider the investments we make in our cities and ask ourselves “for whom”—who will benefit? 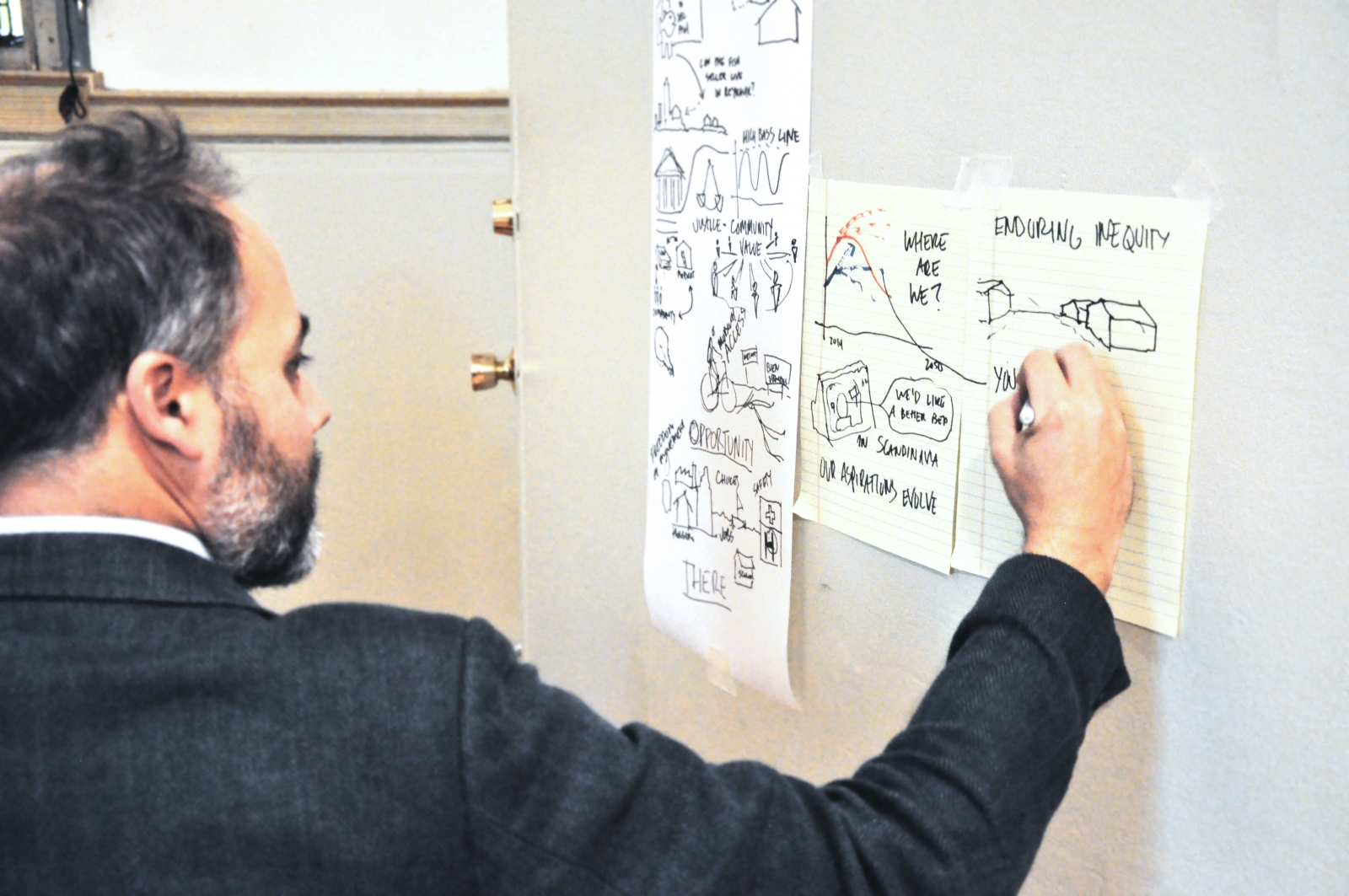 More on the topic of equity…