Architectural criticism has long been the domain of a rarefied few. But it needn’t be that way, argue these Paris-based filmmakers, who cast their lens on the unassuming characters who interact daily with some of the world’s most iconic buildings. 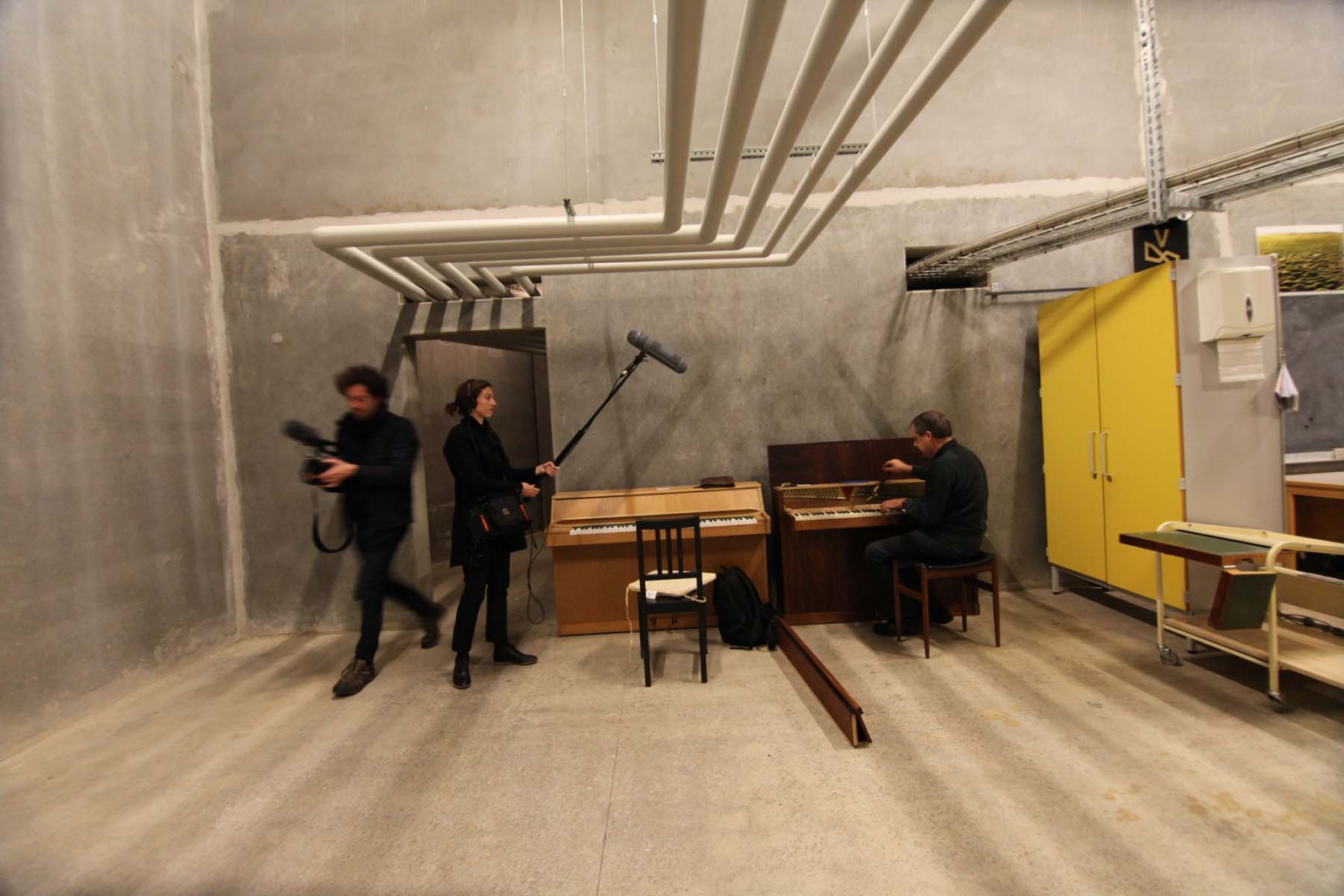 The pair on location for their latest film, The ∞ Happiness

If walls could talk, what stories would they tell, not only about our intimate selves but also about our cultural assumptions, our social interactions, and the values we cherish most? Short of getting the inside story directly from walls, filmmakers Ila Bêka, 45, and Louise Lemoine, 33, strike up conversations with that other silent cast: the people who sweep the rooms, wash the windows, fix the leaks, and change the light bulbs.

“Our goal is to democratize the highbrow language of architectural criticism,” says Bêka, an architect and filmmaker trained in Italy and France. “Free speech on the topic of architecture is not the exclusive property of experts.”

For the last five years, the pair has interviewed countless individuals in charge of maintaining a number of landmark buildings designed by renowned architects, from Auguste Perret to Frank Gehry.

They’ve talked to employees such as concierges, cleaning ladies, repairmen, security-system installers, and house painters, but also residents, neighbors, dog walkers, and occasional tourists eager to get a tour of the premises. The result is Living Architectures, a series of documentaries on important buildings as seen through the eyes of everyday people. No talking heads, no voice-over, no off-camera commentaries—just the raw stuff of lives whose relationship to the built environment is as much part of the architecture as the walls, the windows, or the roofs.

The first film, Koolhaas Houselife, was shown at the Venice Architecture Biennial in 2008. Having now earned cult status, it features Guadalupe Acedo, the formidable housekeeper who cares for a villa near Bordeaux, France. A masterpiece of contemporary architecture designed by Rem Koolhaas’s OMA in 1998, the structure is beginning to show some wear and tear and requires significant upkeep. Fifty years after Mon Oncle, the documentary has been described as an accidental remake of Jacques Tati’s iconic comedy. But far from being candid, the humoristic tone of the film is mired in ambiguity. “There are many funny sequences in it,” says Bêka, “but our intent is serious. We are exploring the impact of architecture on people’s daily existence, as well as their sense of self.”

This first foray into cinéma vérité was not meant to be a critique of contemporary architecture, but rather of the kind of architectural criticism that prevails today. Instead of reflecting on the discourses of the architects and how they meet their objectives, the filmmakers assessed the results from the point of view of the users— people who, for the most part, have no grasp of the theoretical issues at stake. 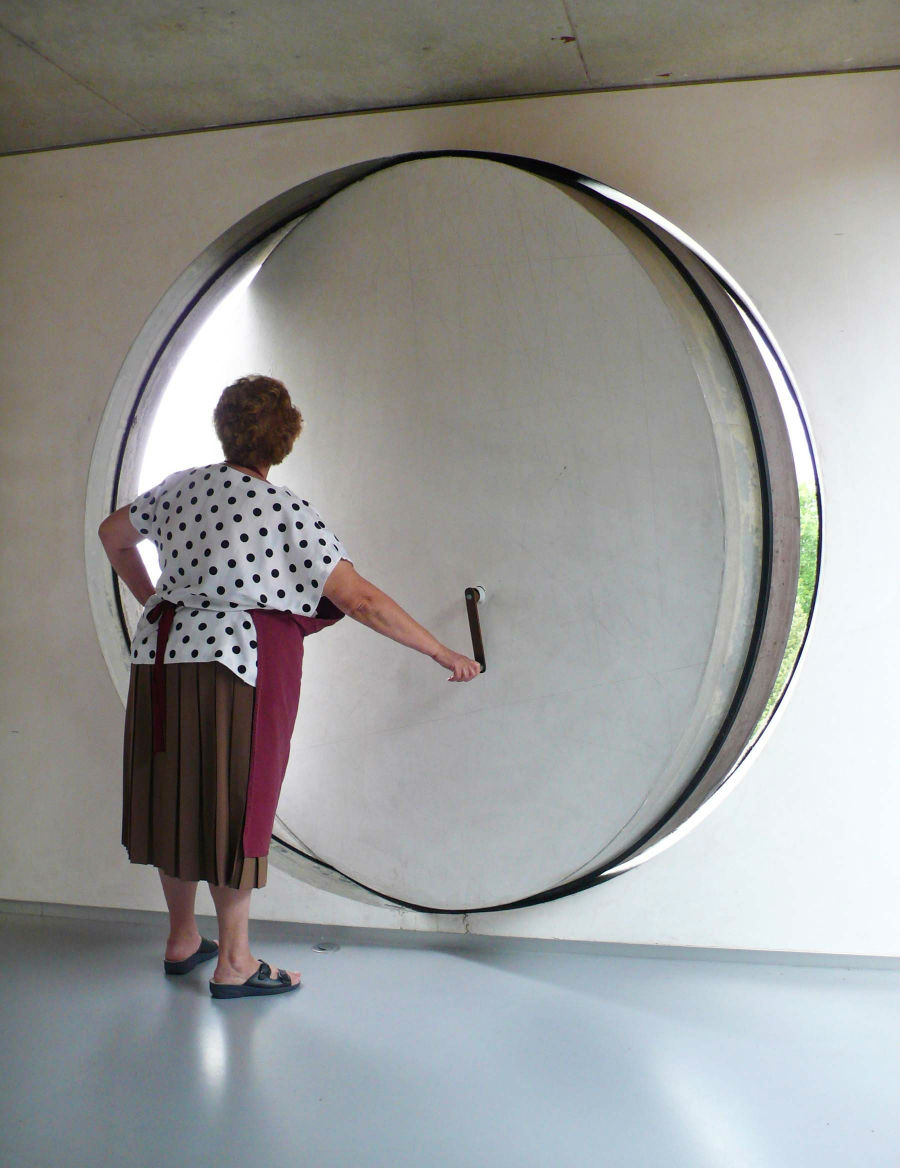 Lemoine, a French filmmaker who also studied philosophy, knows how difficult it is to do fieldwork. “Our challenge, when we approach strangers in the streets, is to earn their trust,” she says. “But people relax as soon as they understand that we are artists, not journalists.” Self-financing, a deliberate choice, assured creative freedom, but getting access to the architectural projects was never easy. The filmmakers turned their reduced budget and low profile into a signature style—tightly edited sequences of short epigrammatic scenes that never belabor the point, exquisitely understated interior shots, and unexpected soundtracks that contribute to the spatial illusion.

Bêka and Lemoine’s newest film, The ∞ Happiness (pronounced “the infinite happiness” ), explores the inner workings of 8 House by Bjarke Ingels Group in Copenhagen. Rather than perpetuating the idea of perfection, virtuosity, and infallibility usually attributed to famous architectural works, the filmmakers seek a building’s vitality, fragility, and vulnerable beauty, as seen through the eyes of those who interact with it.

After the initial success of Koolhaas Houselife, Bêka and Lemoine were able to shoot four more independent films, arrange for their limited distribution in festivals, and produce a handsome box set along with a book. Pomerol, Herzog & de Meuron is a documentary about a dining hall built for party-loving grape pickers in the Bordeaux region. Xmas Meier explores the life of the working-class neighborhood that thrives around Richard Meier’s Jubilee Church in Rome. Gehry’s Vertigo is a cliffhanger, with the camera following a trio of acrobatic window washers working at the Guggenheim Museum in Bilbao, Spain. Inside Piano investigates three of Renzo Piano’s smaller masterpieces: the B&B Italia Offices, the underground IRCAM center in Paris, and the Fondation Beyeler in Basel.

Some scenes are precious ontological moments. The carefree concierge of the Auguste Perret apartment building runs up and down the stairs all day long, like a good-natured hamster in a cage. A maid, during a break sweeping the floor of the Giacometti gallery at the Fondation Beyeler, sings a doleful ballad. The animated conversation of the three Bilbao window washers is completely blocked out by a racket of pneumatic drills. And the priest of the Jubilee Church, in the middle of an eloquent speech, inadvertently knocks down the broom and the dustpan that one of the volunteer cleaners forgot to put away.

Today, Bêka and Lemoine are accepting commissions from architects, museums, and art institutions. The scale of their projects has changed—they now can tackle larger architectural complexes and spend more time doing research. A recent film is Barbicania, a collage of 30 video portraits shot during a month-long exploration of the Brutalist Barbican Estate in London. In the works is an assignment from Bjarke Ingels Group (BIG) for the mixed-use development 8 House in Copenhagen—a lively self-contained neighborhood built in horizontal layers. “Likewise, we will structure our film as a layering of micro cells,” says Lemoine.

But with success, will they still be able to deliver those fragile magic moments? And as they gather accolades, will their unencumbered vision of architecture still offer an antidote to academic jargon? “Regardless of the size of the project, we spend a lot of time listening to what people have to say,” says Bêka. The quality of the images in their films, he contends, is the reflection of the quality of their listening. “We are all ears when they talk, and they feel it.”