How to Read A Political Ad

Without taking a political stand, a new exhibit aims to give its visitors the tools to see through any ad—and become savvier, more critical political consumers.

As is by now obvious to any observer of this presidential election, this is no contest between two parties. Rather, it’s a war between two entirely different countries, worlds, monads—each with its own irreconcilable set of facts, laws of physics, and common sense. She who in one world is considered a history-making role model is dreaded in the other as the architect of global demise; he who’s reviled in one world as the orange offspring of sleaze is extolled in the other as the crusader of truth.

While the culprits for this political siloing range far and deep, one accomplice is unmistakable: advertising. Last week, The Toledo Museum of Art opened a new exhibit exploring how political TV ads have, for the past 60 years, used raw human emotions to build an impregnable, fact-resistant wall keeping the nation’s ideological differences bulwarked and segregated. Without taking a political stand, the new exhibit—I Approve This Message—aims to give its visitors, whether red or blue, the tools to see through any ad—and become savvier, more critical political consumers.

Adaam James Levin-Areddy: Harriett, you founded HonestAds to combat misinformation in political campaigns. What got you started?

Harriet Levin Balkind: My background is brand strategy and marketing. Advertisements and the psychology of how people think have always fascinated me. But when I started canvassing for political campaigns at swing states it was like my eyes were opened. Spending two weeks in Ohio watching political ads really made me angry. These ads were so deceptive. In marketing there are truth in advertising laws, and yet in political ads politicians could get up there and just not tell the truth.

AJLA: When did this frustration turn into an exhibit in The Toledo Museum of Art?

Adam Levine: Harriett and I knew each other from a previous life. She was talking to me about ways to package some of her content into an exhibition. So I said, “Hey, I think it might make a lot of sense for our museum.” For two reasons. First, we’re in the middle of a swing state, which means we’re going to be inundated with political advertising this election season. Second, The Toledo Museum of Art’s purpose is to teach people how to see. We don’t say, “Come to our museum and look at great works of art.” We say, “Come to our museum and engage with great works of art, in the service of learning how to see them.” We call it visual literacy.

AJLA: What do you mean by “visual literacy”?

AL: We create tools with which people can better interpret the visual world. This is part of the museum’s larger mission. This exhibition is just one narrow application of our methodology. The purpose of the show is not to demonstrate how those ads discuss issues – we don’t want to focus on politics at all. The purpose of the show is to focus on how those ads use visual language to stir emotion in viewers.

AJLA: Tom, what was your angle coming into the project?

Tom Hennes: It sounded like an epic project to join. I am an advertising skeptic. If somebody advertises at me it’s a way to send me in the opposite direction. Ads fascinate me and I approach them with a very jaundiced eye.

AJLA: The show sorts political ads by the emotions they convey. Why emotions?

HB: We talked about doing them by party, by candidate, but what really just rose to the top, was that it should be about the voter. How the voter experiences the ads. What we decided to focus on is that facts don’t change minds. Research shows people feel before they think and vote less on issues and more on emotions.

TH: James Hicks, who was our lead designer, did a huge amount of the legwork filtering through literally thousands of ads along with Harriet and Adam. Through his research, he was able to show us the pattern: political ads utilize an emotional spectrum ranging between fear and hope. So we began to categorize the ads that way. Later we also distinguished anger, clumped under fear, and pride, clumped under hope.

AJLA: Will the exhibit let visitors experience these emotions?

AL: We knew that the experience needed to be immersive. There will be four theaters: one dedicated to each of the four emotions (anger, fear, pride and hope) and a fifth devoted to “change” and to what happens to ads when the sensibilities of society evolve. We want to flood visitors with political ads, we want the ads to work on them and stir their emotions, but as an outcome we also hope that people will become more aware of exactly how their emotions are being triggered by the ads.

TH: We came to this idea of a wedge that symmetrically divides the room. From the first moment you enter the exhibit you face the point of the wedge and then your path diverges: fear is on one side, hope is on the other. You choose your emotional path and then let it lead you. On the other side of the wedge there’s “the mood room.”

AL: The mood room will be totally surrounded, floor to ceiling, by images and sound. It will be noisy. It will be bright. An extraordinary sensory stimulation throughout.

AJLA: So do you hope visitors will emerge from the exhibit better armored to face the flood of manipulation coming their way?

AL: Sorry, but we’re very careful about the language that we use, and we have gone to great lengths to use the term “persuasion,” as opposed to “manipulation” or “propaganda.” The purpose of the show is to empower people, and we’re worried these words can turn people off. 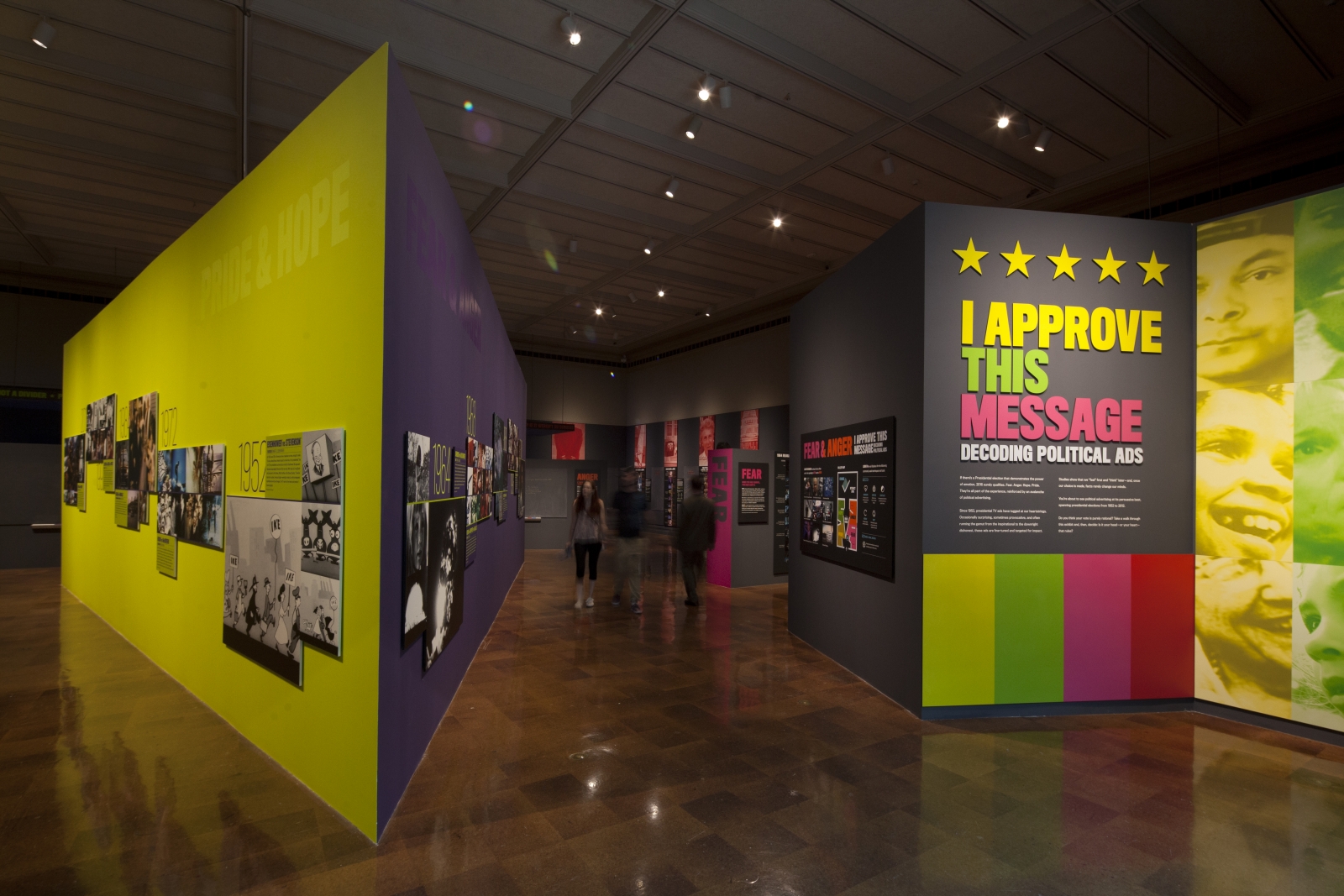 AJLA: Is there a real distinction, or is it just better marketing?

AL: You can argue that there’s only a semantic difference between all of them, but “manipulation” and “propaganda” have historic resonance. They suggest that people are automatons that can be made to act in a particular way, as if by the pull of strings. That’s not how political ads work. What happens here is that emotion is being leveraged to cause people to feel a particular way, and in this way to influence their decision-making. But there’s no 1-to-1 correspondence. What we do is help people unpack the persuasion techniques ads use, but we want to make sure nobody leaves feeling disempowered, as though they don’t have free will, because they do. The very premise of the show is that we’re re-activating, or re-energizing that free will.

AJLA: How do you do that?

AL: For some of the ads we offer annotation dissecting the techniques they employ. But when you’re in one of the theaters, you won’t need our commentary. People are smart. If we just play all the ads chronologically, straight through, in a 10 minute loop, people will realize that these are the same ads, running over and over again, with the same soundtrack and the same editing, and it doesn’t matter what political party you’re in.

AJLA: How have ads changed throughout the years?

TH: There’s this inter-generational learning among ad makers and among campaigns. To see the degree to which one idea gets handed off four years later to someone else, then picked up again eight years later… To begin to see these long threads, and connecting them together, was striking.

TH: Yes, exactly. You can see the evolution of the medium over time, how the instruments used—the visual language, the timing of the editing—become more sophisticated and less blunt. Yet a fear ad today is not fundamentally different from one that was in the Johnson campaign. Reagan used the imagery of a bear prowling in the forest, alluding to the Soviet Union of course. Then Bush, the Second, ran practically the same ad only with a pack of wolves. Romney, I think, used snakes.

TH: The same archetype, even almost the same music and the same cuts. It’s fascinating to see how the metaphor evolves and what represents the threat. We moved from a monstrous unitary threat to the idea of several flesh-eating dogs and finally to this idea that they’re everywhere. They’re now crawling on the ground and they’re poisonous. This evolution tells you how the focus of anxiety changed over time.

AJLA: But not all ads are created equal, right?

TH: All of them are attempting to persuade. Some of them do it with probably a greater grasp of the factual world as we know it than others, others use a more fabricated reality.

AJLA: What kind of problems did you face in figuring out how to present your findings?

AL: One thing that was very important to us was that it’s a totally non-partisan exhibition. We’ve taken great pains to keep it that way.

HB: This gave us trouble in deciding on a color scheme. We needed clear colors to express the emotions spectrum, but didn’t want anything to be red, white, and blue – people automatically think blue means Democrats and red means Republicans. We ended with purple and pink on the fear/anger side and yellow and green – that isn’t environmental green! – on the pride/hope side. And the best thing was that we were able to pull these colors from the TV’s color bar.

AJLA: You started this exhibit a year ago. Did you feel it has become more urgent as the election cycle progressed?