New studies show that interior designers can have a much bigger impact on climate change than they ever imagined.

In November 2018, interior designer Lily Weeks attended the Greenbuild International Conference + Expo in Chicago with a mission. Just a month prior, the United Nations’ Intergovernmental Panel on Climate Change had released an alarming report marking 2030 as a point of no return for global warming caused by the emission of greenhouse gases. At the time Weeks was working on an expansion of her firm WRNS Studio’s San Francsico offices, and wanted to learn as much as she could about lowering carbon emissions on the project. She came to the conference determined to dig up more, but was soon frustrated. “I found a session on embodied carbon,” she remembers. “But they didn’t talk much about interior design. There just wasn’t much information out there.”

We’ve known at least since 2003 that the building sector contributes 40 percent of worldwide carbon emissions, and the movement to reduce that impact has largely been spearheaded by architects. Over the years they’ve created initiatives like Architecture 2030 and added commitments to fighting climate change into the code of ethics of their professional body the American Institute of Architects. As buildings have become more energy efficient in their operations, architects have also started paying more attention to embodied carbon (i.e., the emissions associated with manufacturing products, transporting materials, and constructing buildings).

“People looked for the big pieces of the pie first,” explains Kate Simonen, executive director of the Carbon Leadership Forum (CLF) and chair of the Department of Architecture at the University of Washington. “That’s where the focus on operating energy came from, because that tends to be bigger than embodied carbon emissions.” Of the latter, most estimates have pegged concrete, steel, and glass as the big carbon culprits—all materials that architects have the most influence over.

By contrast, when WRNS Studio analyzed the embodied carbon footprint of its award-winning LEED Platinum building for Sonoma Academy’s Janet Durgin Guild & Commons, interior finishes came in at about 7 percent of the total. “When my interiors team sees a number like that, they feel like they can’t make much of a difference,” Pauline Souza, the firm’s director of sustainability, says ruefully.

But experts might have seriously underestimated the carbon footprint of interiors, according to studies completed in the past two years. Research conducted by CLF and Seattle-based LMN Architects indicates that interior designers may be responsible for emissions at least equal to those associated with the structure and envelope of a building. Interior design, it turns out, has been doing great harm.

The primary way of assessing the carbon footprint of buildings is through a life cycle assessment (LCA), and therein lies the rub—the life cycles of architecture and interiors are completely different. Take a commercial building: Every few years, leases end, spaces fall vacant, and new tenants move in and fit out the space to better suit their needs.

Estimates of how often this happens can vary from 7 to 20 years per space, depending on a host of factors. Tech companies are notorious for outgrowing their offices rapidly, while 70 percent of U.S. homeowners who renovated their homes in 2019 said they had undertaken interior remodels. Such cycles are the engines of growth for interior design.

“I started really wondering what the impact would be for cyclical renovations,” says Jenn Chen, an associate interior designer at LMN Architects. Along with Kjell Anderson, the firm’s director of sustainable design, Chen began to investigate this by analyzing LMN’s own office space in Seattle’s Norton Building.

“We used our office because we were able to find the information on our past renovations,” Chen says. “We moved into the Norton Building in 1984, and since then we’ve done a fairly major renovation about every nine years.” Anderson and Chen assumed that at least one other renovation had taken place before LMN moved in, making for a total of five renovations in four decades. They then pulled together environmental data for all the materials in those renovations, fed them into a tool that CLF created to calculate the embodied carbon of tenant improvement projects, and made a shocking discovery.

“If we add all that up together, the cumulative embodied carbon of the interior renovations actually surpasses the emissions of both structure and envelope,” Chen says.

To make matters worse, Anderson and Chen’s numbers are conservative estimates. For one, even though many interior products and materials are more sustainable today than they were in the 1990s, the duo used today’s carbon footprint data as the basis of their calculations. Secondly, they did not include any updates in electrical fixtures or lighting. Third, concrete mix has become at least 30 percent more carbon efficient than it was in 1960—so for a building constructed today the scales would tip even further. All signs point to the conclusion that, over the course of a building’s life, interior renovations could have the biggest embodied carbon footprint.

This research lands at a time when awareness of climate change and carbon emissions is at a fever pitch. “Corporate clients are becoming more sophisticated about their climate impacts and their climate commitments,” CLF’s Kate Simonen says. This past January, Microsoft pledged to become carbon negative by 2030, while in June, Amazon announced that three major partners had signed on to its carbon neutrality commitment. Starting this year, Salesforce has committed to undertaking the International Living Future Institute’s Zero Carbon Certification for all its workplaces. “If we go down to a much smaller scale, where clients had one tenant improvement project every ten years or something like that, they’re going to be slower to take that on, as part of their own climate commitments,” Simonen predicts. “What does that mean for how interior designers practice?”

Chen jokes that as LMN was conducting its study, she’d often say, “I’m going to research myself out of a job.” However, as the COVID-19 pandemic has proved, interior renovations aren’t frivolous. In addition to improving air quality or responding to new findings on health and wellness, “there are cultural and societal changes, and shifting organizational needs,” she points out. One can’t simply wish renovations away.

Instead, says Meghan Lewis, a senior researcher at CLF, interior designers should be deliberate about where they “spend” their carbon. Before joining CLF, Lewis was head of global energy and sustainability at WeWork, where she conducted a study of one of the company’s tenant improvement projects. “WeWork spaces aren’t all open-plan, so the largest element for us to consider was storefront, and following that, the interior walls,” she says. “With low-carbon options for the wallboard, the installation, the studs, there’s a lot that can happen before you need to think about sacrificing aesthetics.” 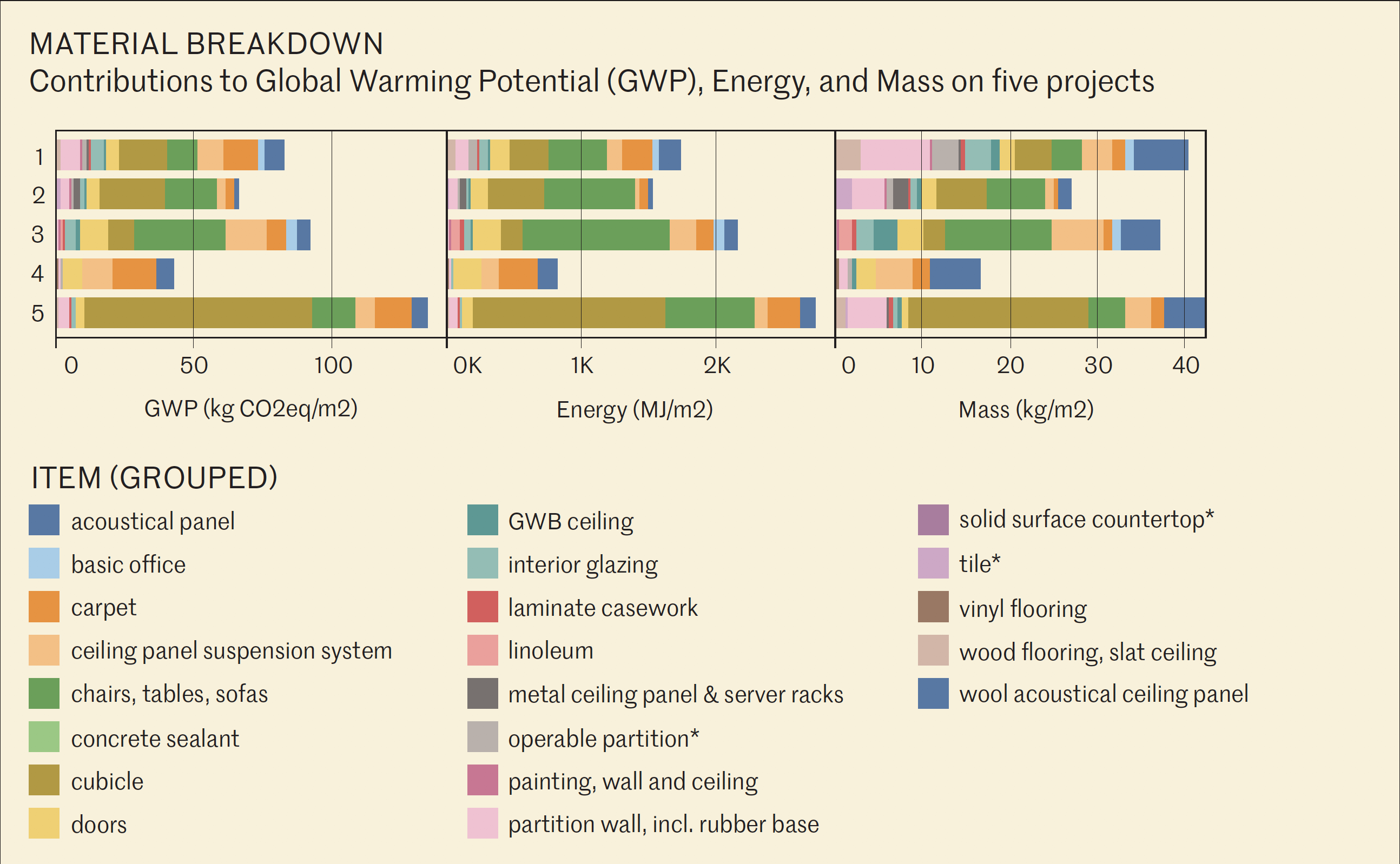 Interior designers have great power through the specification process. Many manufacturers of interior products have made significant progress on their own carbon footprints, while scores of others have released their data through Environmental Product Declarations that can be accessed through databases like mindful MATERIALS and compared using tools like EC3. “When you talk to a manufacturer or a product rep, ask them what the carbon footprint of their material is and what their de-carbonization strategy is,” Simonen advises. “Manufacturers that are doing good work will have a chance to talk about it, and the ones that haven’t started will see that they should.”

In the long term, though, interior designers will have to adopt structural changes. Since the biggest carbon impact of their profession is through the renovation process, reuse and reclamation of furniture and interior elements will have to become mainstream. Similarly, end-of-life strategies and design for disassembly must be adopted as basic ethics of the profession, so each designer can responsibly pass the baton to the next. None of this should stall the vital momentum that interior design has built by centering human wellness, health, and inclusivity.

It will be a tough balance to strike, and not all answers are immediately clear. When Chen and Anderson presented their study’s findings at a virtual event hosted by Designer Pages this October, an audience member asked: “Well, if you don’t have acoustic panel ceiling[s] because you’re going for minimizing material use, how do you deal with acoustics?” Chen’s response: “You don’t want to sacrifice human comfort, but you want to make the best decision. And sometimes that doesn’t mean going straight to the lowest embodied carbon material that you can think of.”

If you are an interior designer and want to join a group of professionals exploring how you can fight climate change, visit our sign up page here.