As part of programming for the 2017 Chicago Architecture Biennial and EXPO CHICAGO, this relationship is being investigated once again in a series of site-specific performances conceived by Nick Cave, the visual artist known for his surreal Soundsuits, in partnership with architect Jeanne Gang. One of the performances, a giddy blaze of color and movement called Up Right Chicago, was staged yesterday evening at Navy Pier as a preamble to a weekend of design-related festivities.

Attendees fortunate enough to attend the sold-out show in the pier’s vast Aon Ballroom were greeted with a curious sight: a series of sawhorse tables, piled high with plumes of neon fur, beaded masks, swaths of flamboyant fabric. Behind these tables, abutting a stage, was a fence-like row of gleaming “Stage Buoys,” silver columns weighted on the bottom so that when touched, they lean—but not topple—like roly-poly toys.

The performance began at a deliberate plod, backed by a dirge-like accompaniment by musician Kahil El’Zabar: Male performers filed onto the stage and purposefully removed their shoes, sweaters, and pants, until they stood only in shorts and cotton tanks. Another group of performers, dressed in white smocks and gloves reminiscent of couturiers, in turn, helped the dancers into a pair shaggy, grass trousers. 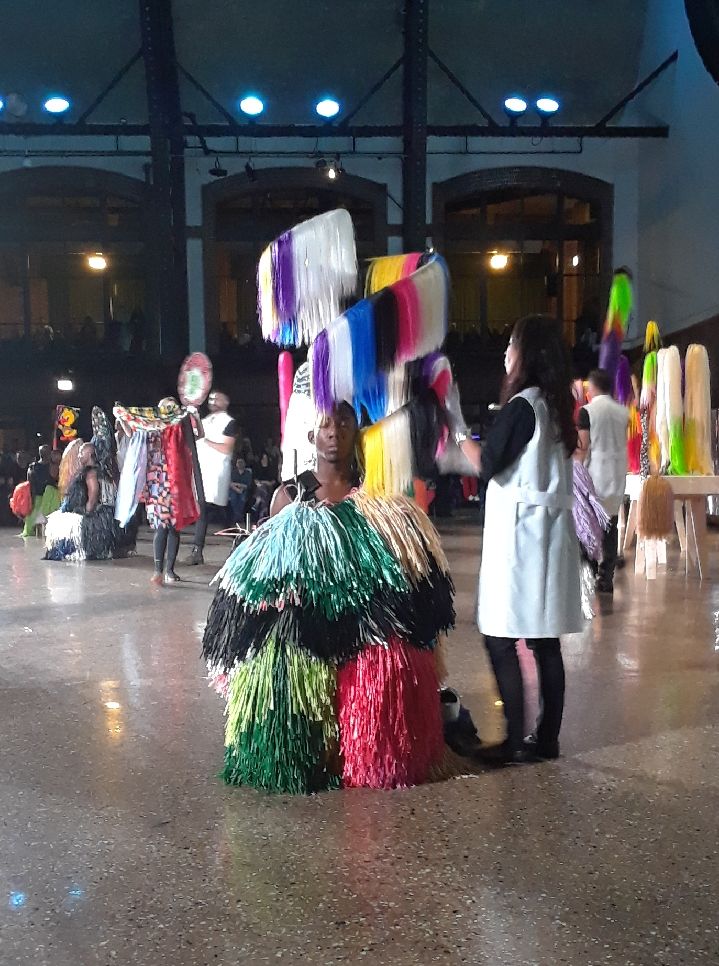 Then Cave’s signature shapeshifting began. The “assistants” ritualistically placed metal armatures over the dancers shoulders, approached the heap of objects, and began carefully festooning the frames. They continued to heap on an implausible number of hairy, beaded, and gauzy accoutrements until the tables were emptied and the performers were transformed into towering, shaggy creatures—Maurice Sendak’s beasts on acid.

The dancers, entirely concealed by the Soundsuits, began traversing the stage. On occasion, they would approach the audience, inviting onlookers to touch the costumes, or clasp their palms. As the score swelled from baleful to exuberant, the movements became increasingly frenetic and the music was punctured by hyena-like yips and whoops. The stage became a dreamlike, polychromatic vortex of waving tendrils and rustling straw.

Though a visual delight Jeanne Gang’s glimmering columns weren’t as integral to the performance as one would have hoped. In the final moments of the performance, a single dancer ran his arm along the columns, causing them to sway precariously as he disappeared from the stage.

But there are more performances to come: A series of Cave and Gang performances, including an outdoor performance called Heard Chicago, will take place September 16 and 17.