A viral video of the massive building project says a lot about Foster + Partners’s magnum opus and the possibilities of unmanned aerial vehicles.

It took a drone to find a way around Apple’s famed secrecy. Last week, Youtube user JMCMinn uploaded a video (below) that offered the world a first, real-life glance of Apple’s Campus II, designed by Foster + Partners. Parked safely outside the green fence encircling the site, JMCMinn sent up a DJI Phantom Quadcopter, equipped with a GoPro camera, to capture the giant construction pit. (He was wearing Carl Zeiss Cinemizer video goggles, which allowed him to see what the drone’s camera was seeing.)

A year into construction, the $5 billion project appears more landform than building. A spectacularly huge circular trench has been dug, and the concrete foundations of Lord Foster’s spaceship of a campus are visible. The design’s geometry—a donut superimposed on a huge rectangle—is astonishingly delineated.

The video has taken the internet by storm, with over 2.5 million views so far. Here’s what the 8-minute footage tells us about Apple’s gargantuan spaceship.

1. The contest for architectural event of 2016 has been won, if the obsessive media tracking the project is anything to go by. Maybe the Design Museum London should just give Foster + Partners their Design of the Year award already.

2. The scale of Apple Campus II is immense. It’s one thing to know that the site is 175 acres and that the ring itself will be almost a mile across. It’s another to see the video evidence—the sci-fi metaphors that have dogged the project from the start take on a whole new meaning now. It’s almost as if the thing was meant to be visible from space.

3. Drones are still the Wild West of technology; Apple is still a scary litigator. Lawmakers haven’t dealt with the privacy or security issues raised by unmanned aerial vehicles yet, so what JMCMinn has done isn’t illegal. But he felt compelled to add a disclaimer for the benefit of the Apple attorneys: “The quad copter remained under 400 feet as per FAA Advisory Circular 91-57 for remote controlled airplanes and helicopters and the helicopter did not encroach into any airport no-fly zones. No people were present and no equipment was operating at the construction site at the time of filming.” (As an aside, JMCMinn’s Youtube history shows that he recently liked a video called “Police Harassment Cops Afraid Part 1 Taking Pictures NOT a Crime.”) 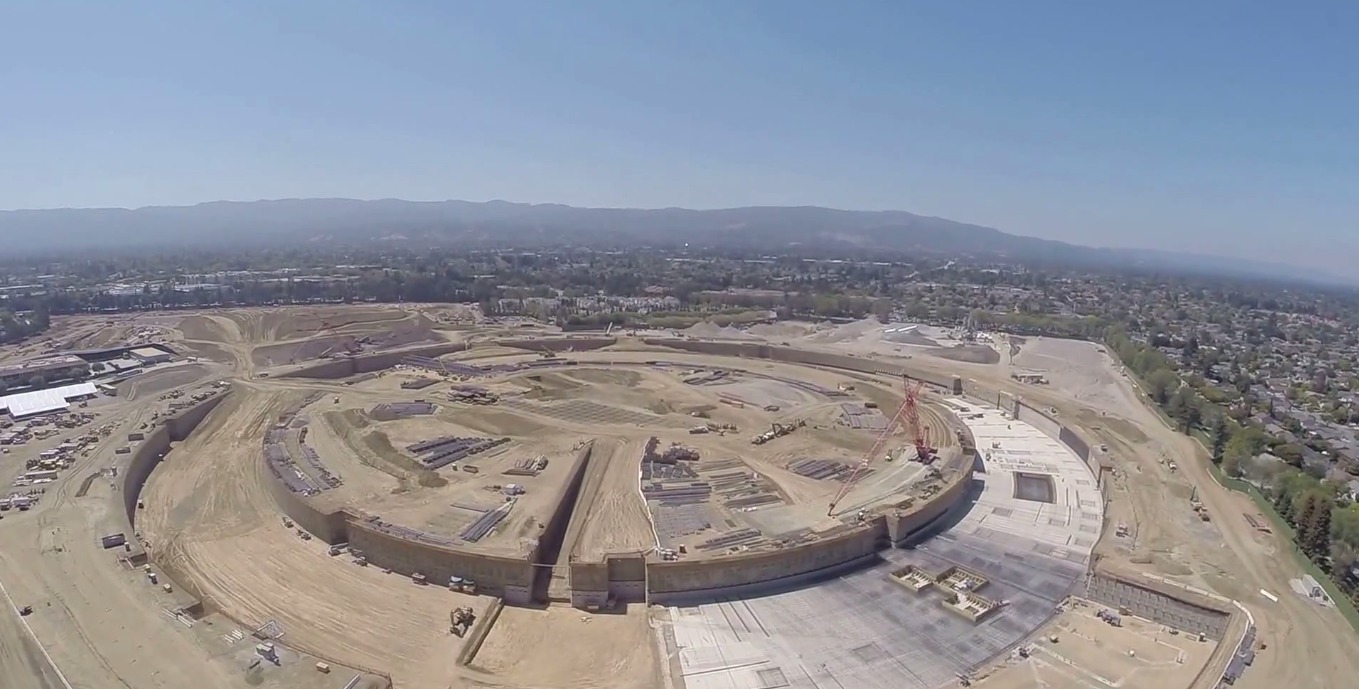 4. Pulling off a stunt like this is expensive, but cheaper than a Mac Pro. The cost of all the equipment JMCMinn used adds up to $2,419.85. The drone itself costs $959. That’s a pretty penny to pay, even for a week’s worth of internet fame. But it’s a surprisingly low cost for a technology that’s still in its infancy. Computing power has grown cheaper over the years—for $2,999, the Mac Pro offers power that supercomputers couldn’t even dream of in the 80s. How much more powerful and cheaper will drones and consumer robots get, given three decades?

5. Apple is missing out on a disruptive technology. Deciding not to get in the robotics race might turn out to be a mistake. After all, Jobs had his eye on touch technology long before the iPhone came out. But as the Washington Post reported recently, Tim Cook remains insistent that Apple will not indulge in the sort of side projects that Google and Facebook have been investing in—drones among them.