What’s the Role of Sacred Architecture in Our Cities?

Reverend Thomas Pike, who was inspired by a 1983 Metropolis conference to become a leader in historic preservation, looks at the importance of sacred spaces in urban areas. 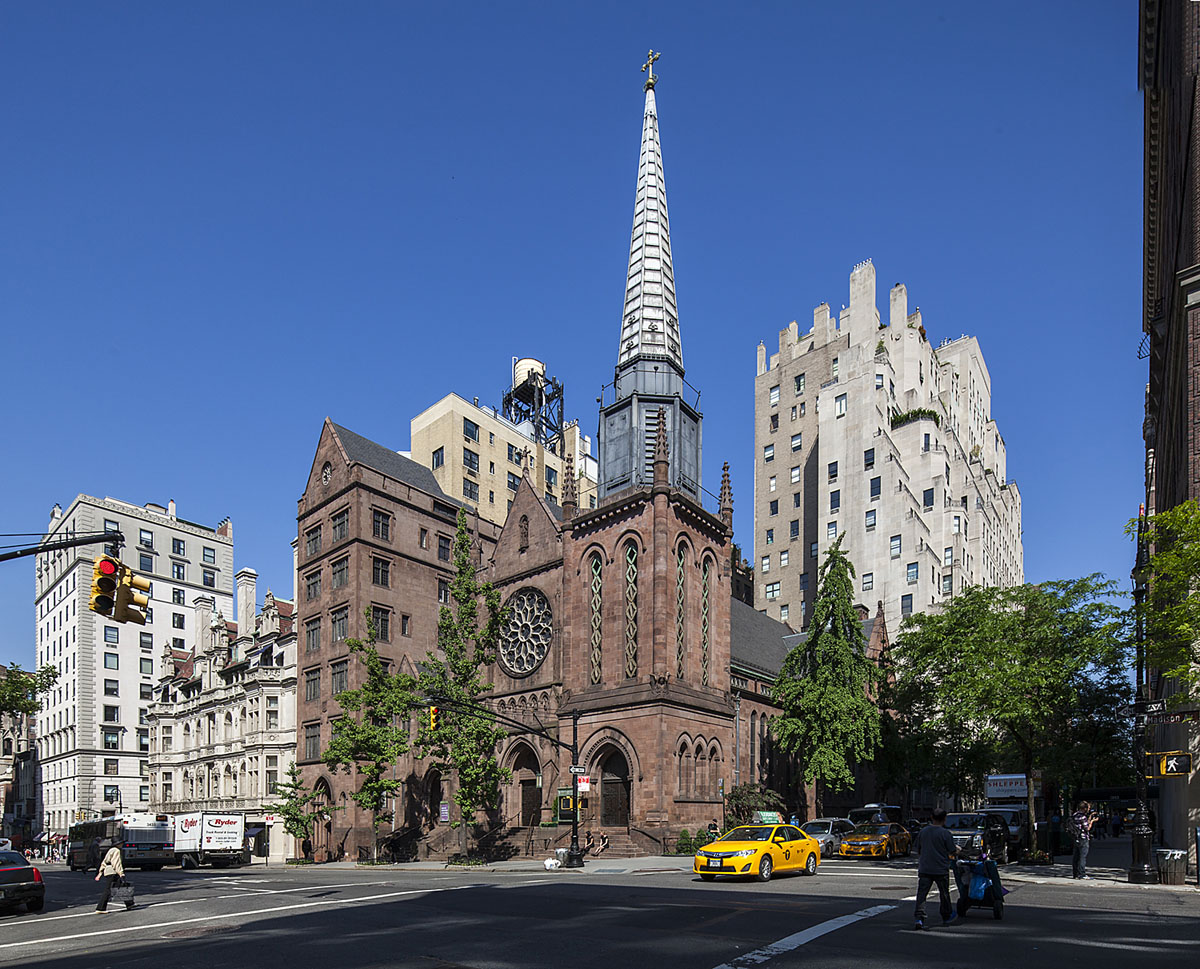 St. James’ Church
In 1924, the renowned Gothic Revival architect Ralph Adams Cram transformed St. James’ Church’s original 1884 building, designed by R. H. Robertson, by reorienting the entrance to Madison Avenue. Cram’s original tower, which had begun to deteriorate, was replaced in 1950 by the present-day steeple, designed by Richard A. Kimball.

I came of age as an Episcopal minister in the 1960s, during the height of the civil rights and antiwar movements. And I was very much caught up in the fervor of those times. I was arrested a handful of times, marched with Father Daniel Berrigan and Rabbi Abraham Joshua Heschel, spent a night or two in jail following sit-ins and public demonstrations. The church, I believed, had a critical role to play in promoting social justice. And I believed even more deeply that these concerns superseded the physical church, the architecture. The buildings were not only relics, but almost obstacles to a larger truth. I was more than ambivalent about that role for the church—its presence on the skyline and place on the street—I was openly hostile to it. As someone who has served on the landmarks commission for three New York City mayors, it’s difficult for me to recall that I once stood up at a meeting and proclaimed that the best thing that could happen to the Episcopal Church would be if we burned down the buildings and started all over again. I was that extreme.

Two events changed all that. The first occurred in 1983, when I was invited to participate in the planning conference Who Owns the Room at the Top?, convened by Horace Havemeyer III and Metropolis. The event—held in the wake of the uproar over the demolition of the Helen Hayes and Morosco Theatres near Times Square, and the development controversies swirling around St. Bartholomew’s Church on Park Avenue—knocked me off my hinges, upending many of my long-held views about architecture and churches. Especially the notion that the buildings themselves were liabilities. The architects, planners, and preservationists who attended the conference planted a different idea in my head. It was a profound and simple one: Religious buildings belonged not just to the people who worshipped in them, but to the communities they anchored. They were a shared spiritual and civic resource. Now, I didn’t leave that incredible event with that belief fully formed (there were no biblical bolts of lightning); I left it open to the possibility of a new point of view.

Religious buildings belong not just to the people who worship in them, but to the communities they anchor.

A new perspective began to emerge during a visit to Sabbathday Lake, Maine, home of the last active Shaker community. An elderly woman from the village, Sister Mildred, was giving me a tour of the museum. I love Shaker furniture, and all of it was magnificent until we reached the last room, when suddenly the purity of the work disappeared in a riot of etched gargoyles and fleurs-de-lis. It was awful. And it was also obvious that, at some sad point, even the Shakers here had succumbed to the marketplace. “Sister Mildred, I’m surprised you’re showing this work,” I said, “because I know how you feel about it.” And she said, “Tom, it’s a Shaker principle. When we tell a story, we tell the whole story, and we tell it truthfully. And the truth is, we did not live up to our principles.”

That exchange helped change the way I thought about buildings. They were no longer inert objects; they were a way to tell the whole story. Eventually I came to believe that the preservation of the built environment could help keep a society honest. To that end, it was as important for Western civilization to preserve Auschwitz as Chartres Cathedral, because both tell the truth about our society. At the same time, I also came to believe that our churches and other religious buildings—the architecture I once scorned—offered up powerful, positive lessons for us as a society. There is no place in America where the diversity of our culture is more celebrated than in the architecture of religious buildings. These historic buildings are both present in the here and now—as centers of faith and community—and physically connected to our past.

Eventually I came to believe that the preservation of the built environment could help keep a society honest.

Several years ago, as a member of the landmarks conservancy, I traveled to Brooklyn for a ceremony commemorating the repainting of a church steeple. It was a white colonial church located in the middle of a poor neighborhood. When I got off the train, I immediately wondered if this was the best use of our money. On my way over, I asked a neighborhood woman for directions, and she shared with me her admiration for the church and excitement about the repainted steeple. Without prompting she said, “It gives me hope.” This reinforced my belief, first cultivated 30 years ago at a planning conference, that there was nothing at all inconsistent about being concerned about the preservation of buildings and the quest for social justice. Indeed, they are linked. 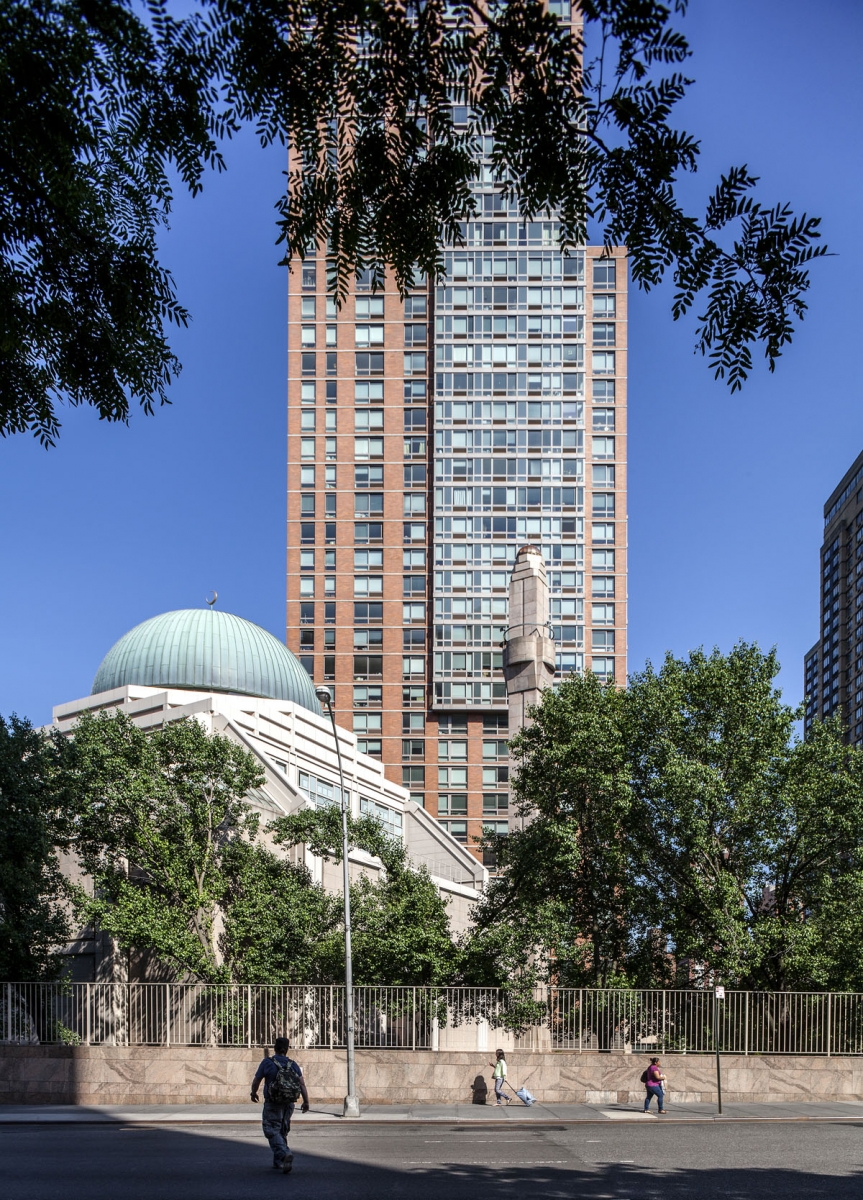 The Islamic Cultural Center of New York was the first building erected as a mosque in the city. Like most mosques, this one, located on Third Avenue and 96th Street—and designed by Skidmore, Owings & Merrill, with the minaret designed by Swanke Hayden Connell & Partners—faces Mecca. 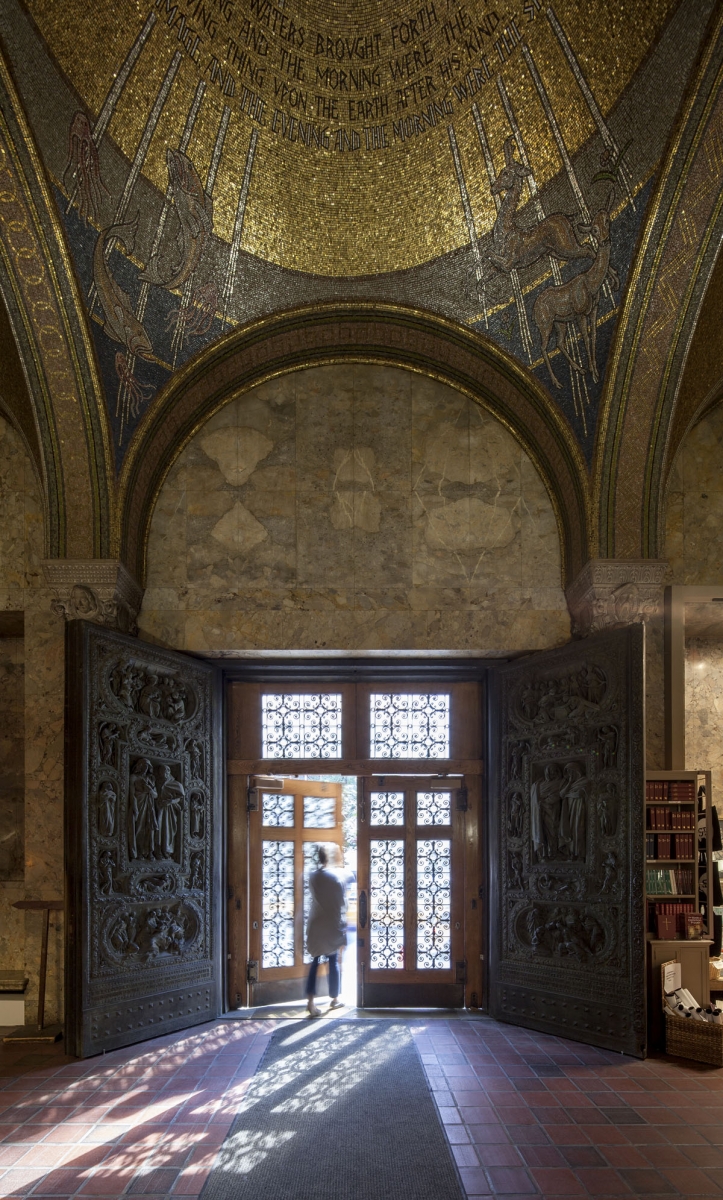 The French Romanesque portal to St. Bartholomew’s Church in New York City was preserved from the previous church on-site. It was designed by McKim Mead & White (1902–03) as part of a memorial paid for by the family of Cornelius Vanderbilt II. 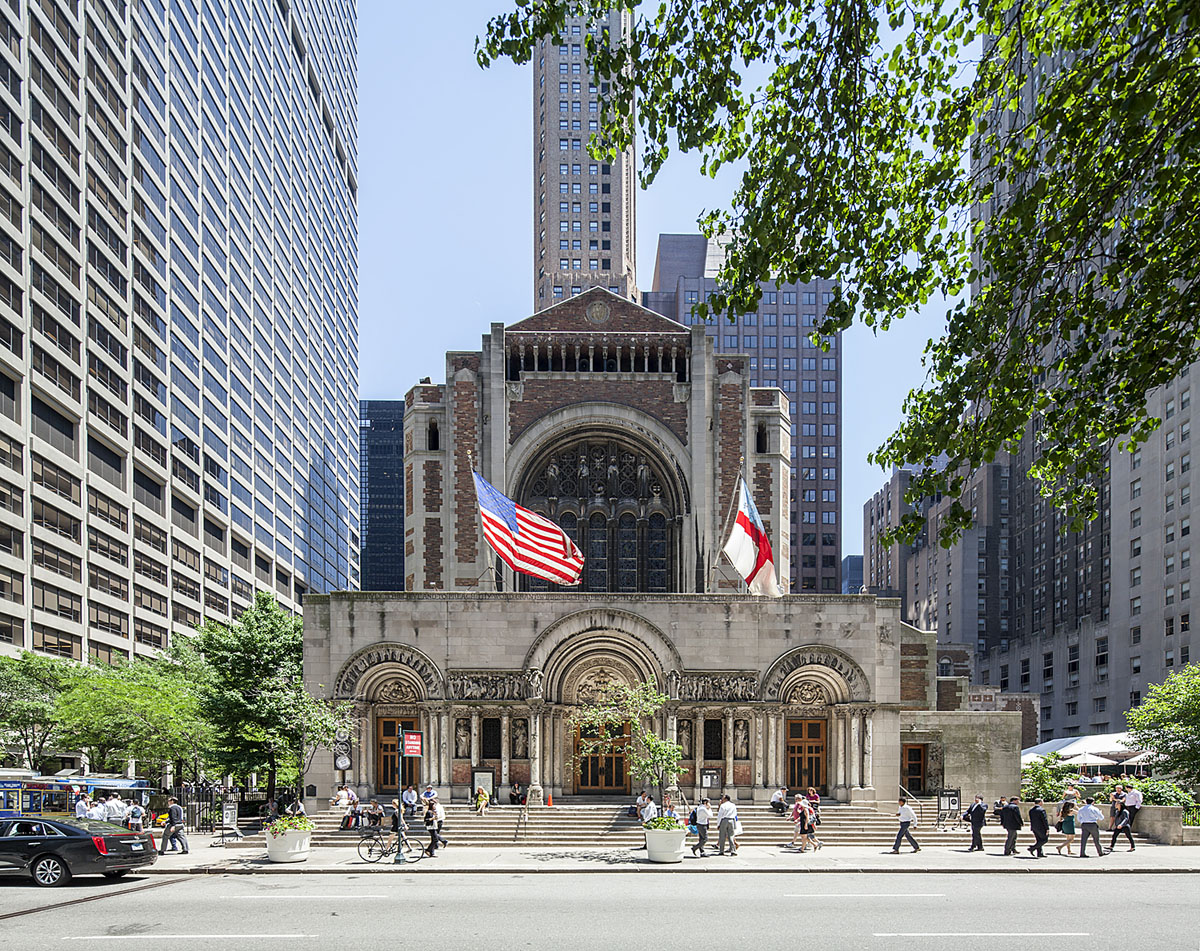 The 1918 church, designed by Bertram Goodhue, was embroiled in controversy in 1981. Strapped for cash, St. Bartholomew’s wanted to raze its adjoining community house and open terrace (to the right of the church) and build a high-rise office tower. A huge legal battle ensued between the church and preservationists, one that went all the way to the United States Supreme Court. The preservationists prevailed when the court refused to hear the church’s appeal. 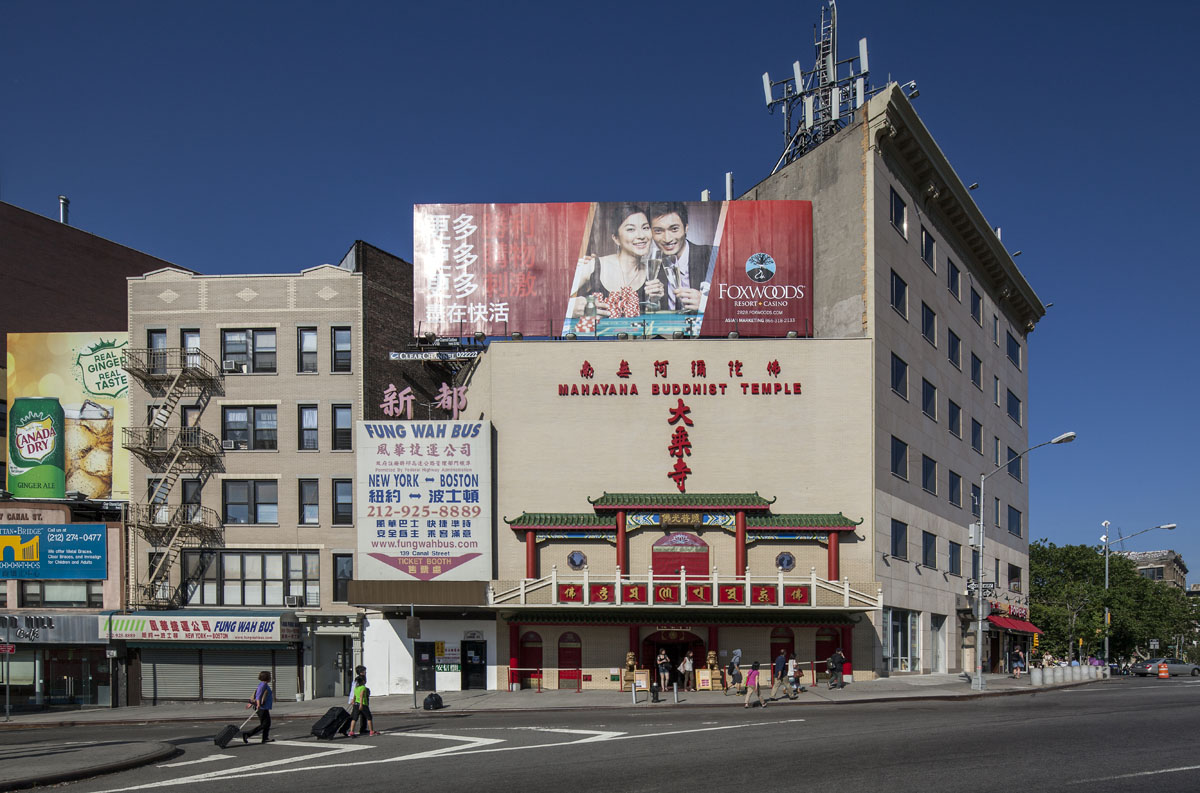 Located at the foot of the Manhattan Bridge in the heart of Chinatown, the Mahayana Temple has one of the biggest Buddhas in the city—a 16-foot gold statue (below). Prior to 1966, the building was an adult movie house, The Rosemary Theater. 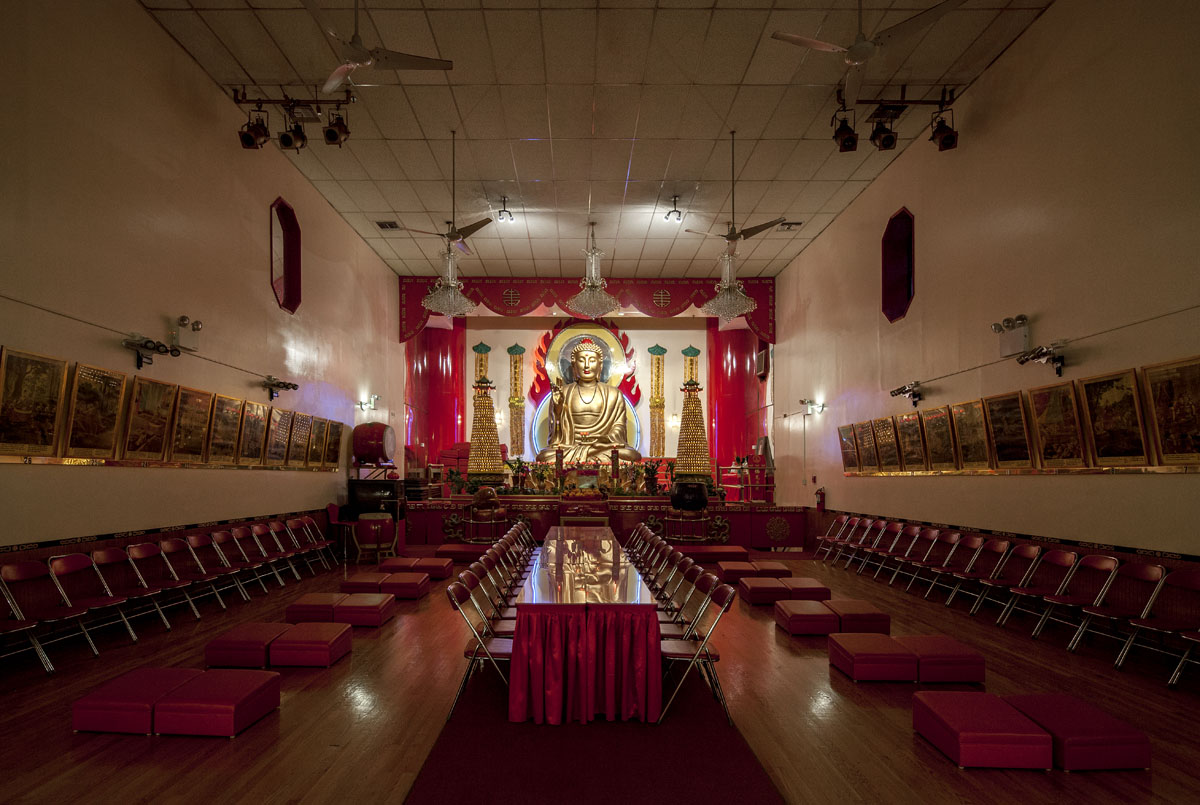 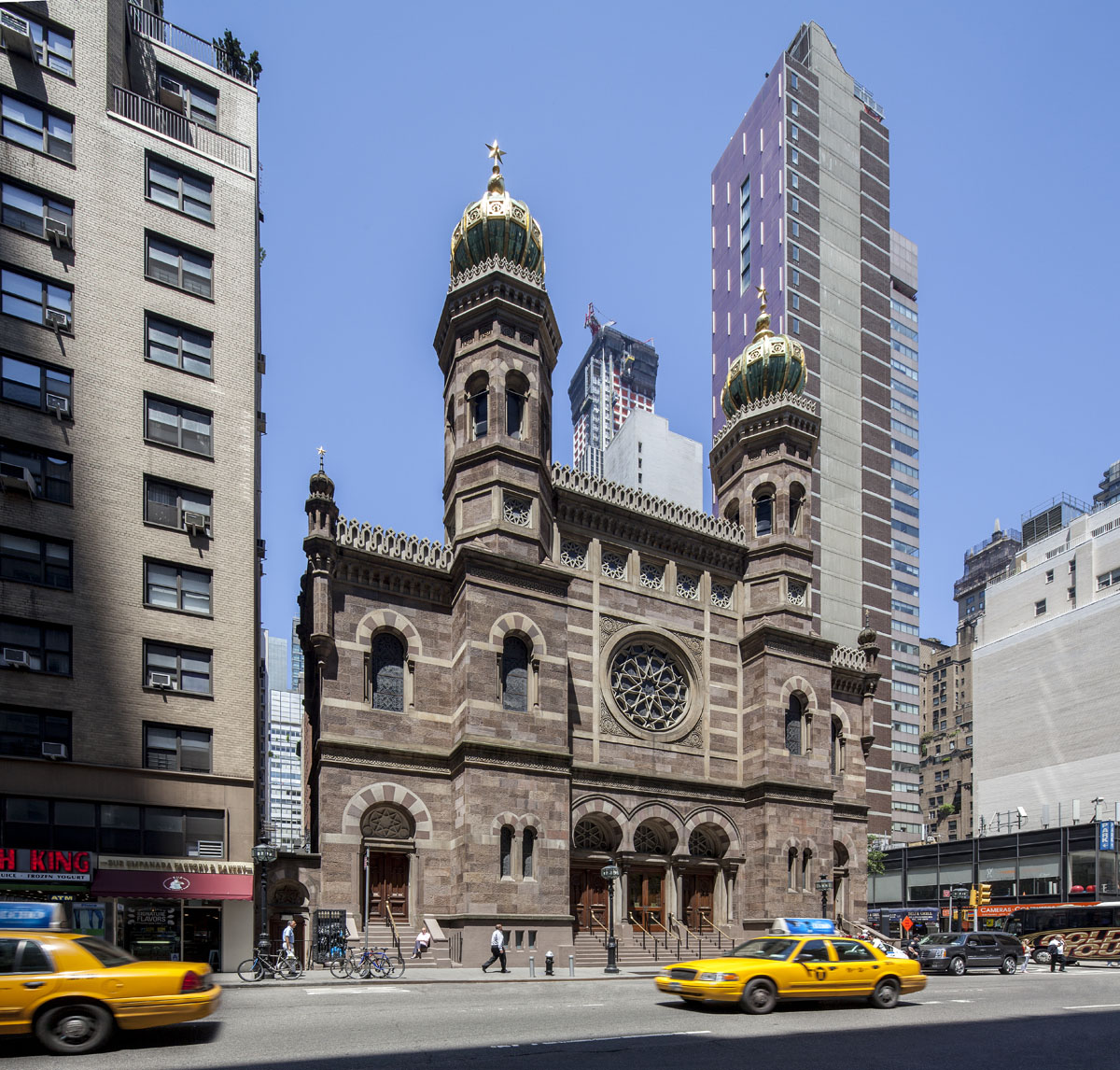 Located on Lexington Avenue in New York City, the 1872 Central Synagogue, designed by Henry Fernbach in the Moorish Revival style, was restored by Hardy Holzman Pfeiffer Associates after a devastating fire in 1998.