Susan Szenasy sits down with William McDonough—the developer of Cradle to Cradle design—to understand why we must employ a new language regarding carbon and sustainable design.

Metropolis editor in chief Susan Szenasy sits down with William McDonough—the designer, author, and developer of Cradle to Cradle design—to understand why we must begin to employ a new language regarding carbon and sustainable design.

Susan Szenasy: Your article in Nature, “Carbon is Not the Enemy,” really caught my attention. You’re redefining how we think about carbon, what it is, and what we should be looking for. It seems like a new phase that you’re leading us to. How did you come up with this idea, that there needs to be a new language on carbon? Can you trace back your thought process?

William McDonough: [With the UN’s Climate Change Conference in Paris in 2015,] everybody kept saying, “Oh, we have to do this, to reduce our carbon 20% by 2020.” Well, when you think about that Susan, it’s absurd. What you’re telling us is what you’re not going to do. You’re going to reduce your badness by 20% by 2020? That would be like getting in a taxi and saying to the driver, “Quick, I’m not going to the airport.” It doesn’t tell us what you’re going to do.

At this point in history, for most scientists, carbon in the atmosphere is a real problem. It actually meets the definition of a toxin. A toxin is a material in the wrong place at the wrong dose and duration. Water is highly toxic at the wrong dose and duration. If I surrounded you with it, for six minutes, you’d be dead. Wrong dose, wrong duration. If you jump out of an airplane over the ocean and hit the ocean at terminal velocity, it’s a very short duration and a very big dose. Either way, you’re dead. Water can be highly toxic.

SS: How we should be thinking about carbon?

WM: Let’s think of carbon on its own terms. Let’s define the circumstance the carbon finds itself in. Okay, if I burn carbon and I release it into the atmosphere, I call it fugitive. It’s escaped. You don’t want to do more of that. In the case of plastic, it’s a form of carbon that’s often in the ocean. It’s fugitive carbon. It’s escaped. It’s where we don’t want it. It’s causing a problem.

Then, if we look at carbon that is sitting still or being recycled across generations, we can call that durable carbon. It lasts. Limestone Mountain is calcium carbonate. It’s sitting there quietly, the clustered carbon. Carbon at the bottom of the ocean’s forming limestone. It’s stable. It’s raw. That is durable.

Then, within that, you have things like a plastic bottle made from oil or a wood beam in a ceiling or a book in a library. These are carbon. The beam in the ceiling, if it’s there for 500 years, that is durable carbon. It is a form of carbon sitting there quietly for 500 years, durable. A plastic bottle is holding water. If I burn that bottle, then it becomes fugitive. If I throw that bottle in the ocean, it becomes fugitive. Different forms, you see?

The third kind I call living carbon. That is carbon in soil. Carbon comes from the atmosphere and nitrogen comes from the atmosphere to the earth’s surface and combines with water and the sun and minerals and guess what? Magic happens. Life. Physics meets chemistry and voila, biology, us. This is life itself. It accrues in the earth as soil. This is what I call living carbon.

With these terms, you can quickly ask yourself: is it living carbon? Then it must be safe for soil. Is it durable carbon? Then we should be recycling it or let it sit there. Is it escaping and causing problems? That’s fugitive carbon.

Then, there’s another layer, which is human behavior. What is the human behavior that yields these results? If you release carbon into the atmosphere, at this point in history, in natural and unnatural amounts, I call that carbon negative. You’re making a problem, causing a problem. You’re toxifying the atmosphere. It would be like pouring lead in a river. It would be lead negative.

If you keep the stuff and recycle it, or let it sit there for generations and take care of it, that is carbon neutral. That is a balance. It’s sitting there quietly. You’re not causing it to be fugitive, et cetera. It’s inert.

We have these types of carbon; living, durable, fugitive. They can cross, right? A wood beam that’s durable carbon for 500 years in a building in Oxford, can become soil still, if it hasn’t been contaminated. It goes from being durable back to being living.

SS: You’re really making a distinction between a resource and a poison.

WM: That’s one way of looking at it, yeah. I would say living carbon is a source. It’s the source of life itself. Then, durable carbon is a resource. You’re re-sourcing it, over and over again. You’re recycling the plastic. You’re reusing the earth-bound carbon as wood. You’re reusing it. The fugitive carbon, in the wrong place with the wrong dose and duration, is a toxin.

SS: How would you ask architects to think about this resource/poison dichotomy that we just identified?

Another is when people say, “I’m going to use a megawatt of electricity and it’s going to release this much carbon from combustion. I’m going to offset that, to be net zero, with that amount of renewable power somewhere.” This is famously known as renewable energy credits.

SS: How can you explain that in laymen’s language?

WM: Just stop it. Don’t offset it. Carbon dioxide in the atmosphere is like lead in a river, right? You don’t put lead in rivers. You don’t start saying, “I’m going to reduce my lead in the river by 20%.” You stop it. It’s a toxin. Here’s a graphic example. How sad would it be if we went to the children of Flint, Michigan and said, “Hey kids. You know, you’ve got a lead problem. We’re going to take out the lead in some other city somewhere because it’s cheaper. You’re going to be net zero lead.” What? It’s so absurd. Just say, “We stop doing this.” That’s all you need. The key graphic message to everybody is: this is not easy, but we’re meant to stop putting carbon in its various forms into the atmosphere and in the oceans deleteriously.

SS: How do you think we can realize the old dream of buildings like trees and cities like forests? How do we begin to adopt that as a kind of mantra of humanity for the 21st century?

The reason I get to do my work is because I produce immense value for my clients. They make money, sell buildings in markets that are dead because our buildings are so beautiful. Everything we do is productive in terms of its value and creation. How do I get to the value? You go, “Oh, my building will be cheaper than that building. I’ll use less energy than that building.” You end up benchmarking everything.

Part of the issue is things like certification standards or rating systems. You end up in reference to other things. You try to be less bad or make more money or whatever. It’s numbers. It’s statistical significance. I start with values. What is right? What is wrong? That’s why we say; being less bad is not being good. Less is a relationship. It’s numerical. Bad is a human value. You can’t mix mathematics and ethics like that.

From there, we move to principles. That’s why I wrote the Hannover Principles. Those are principles that insist upon the right of humanity and nature to coexist. Eliminate the concept of waste. Rely on natural energy flows. Respect the limitations of design. Be humble. Those kinds of things. 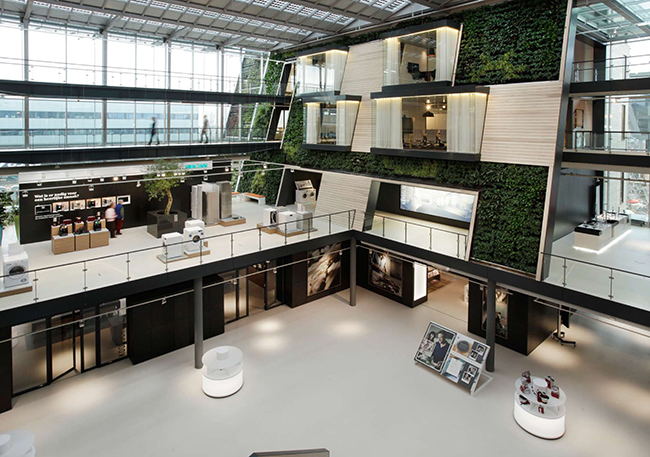 The BSH atrium at PARK 20l20, a large-scale urban development in the Netherlands by William McDonough + Partners

Then, from principles you move to visions. I have visions of cities like forests, buildings like trees. These are visions. Without execution, they’re hallucinations. I know that.

From your visions you move to your goals. My goals are not to be less bad or to use 10% less carbon. It’s to be like a tree. My goal is very simple. My goal is a delightfully diverse, safe, healthy and just world with clean air, water, soil and power. Now, that’s a goal.

SS: Here we are in the first 17 years of the 21st century, and every city is building massive developments. They look like they came from the 1970’s. Cities like forests and buildings like trees, those concepts have been around for quite a long time. It’s not that architects and other people are not aware of them. What is your reaction to these buildings looking and feeling so much like those of 50 years ago or, to be more generous, 20 years ago? Can you offer a critique of this from your point of view—what in the hell are we doing now?

WM: I just have to have hope, Susan. I think people are doing the best they know how, but it’s unprincipled and it’s unprincipled behavior. The issue, to get some core principles in. That’s why we need this new language.

Part of what I’m hoping to do is wage peace with these words. I’m not here to fight. I’m hear to wage peace with the planet. The last century became the pollution century. We had the equity century of the 1700’s. We had the economy century of the 1800’s. The 1900’s was the pollution century. This century must be the ecological century because we’re destroying our home.

I think the other thing that is there, and I know it is a vague and big answer to your question, is a fundamental, psychological concern humans have as a result of the atom bomb. For people my age, even though I didn’t grow up in the United States, I remember coming to visit and being in third grade for a few months with my grandparents. They were teaching us how to dive under our desks during a nuclear attack, as if that would help us. I think there’s a whole generation that thought maybe the world could end at a moment, so it’s time to just go and get what you can while you can.

I think that underlying all of this is the need for peace. Yeah, it’s big. Yeah it’s hopeful. Yeah it’s probably wishful and not effective. What I can do about it is a small thing, maybe change some language, help people change the way they think.

SS: We need hope now more than ever. I just worry that it’s going to be a little bit too late for us.

WM: It’s always too late and it’s always time to start. That’s the way life is.