Charles de Lisle’s wild ride as an award-winning designer is fueled by a deep love for making. 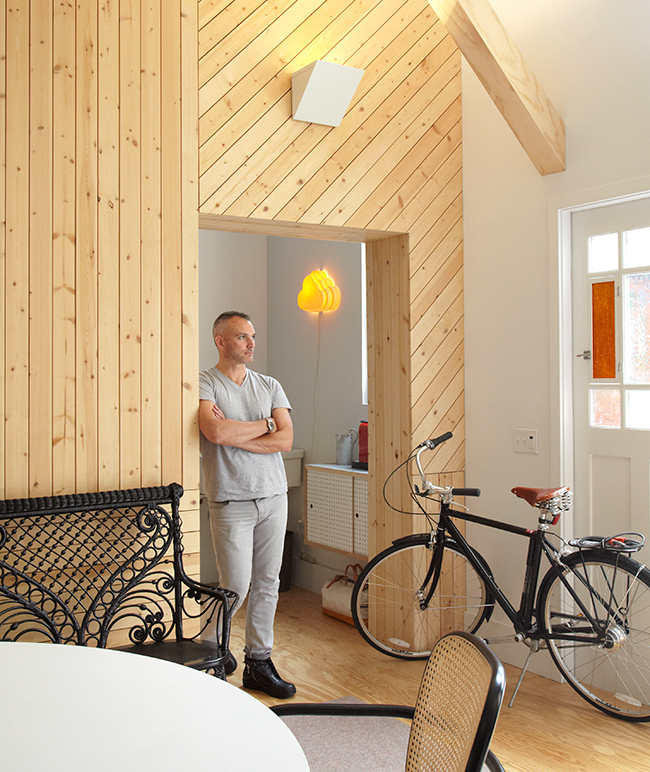 The product and interior designer Charles de Lisle is shown inside his studio, which is located in San Francisco’s Hayes Valley neighborhood.

When the tiny mom-and-pop restaurant State Bird Provisions opened last year in San Francisco, the dim-sum-cart-meets-California-forager joint immediately fit into the city’s existing culinary—and design—landscape. With a menu that featured variations on savory pancakes; a deep-fried quail; and a clean and simple, hand-hewn design aesthetic, the place was perfectly emblematic of contemporary directions in restaurant design. Pegboard walls, an open butcher-block counter, and spare wooden chairs brought together a handmade nostalgia, sleek globalism, and grounded sense of craft.

The success of the concept, which won the James Beard award for restaurant design, was largely due to San Francisco–based interior designer Charles de Lisle’s input, a contribution he terms a sense of “direction and ideas,” a way of detailing “the concept and the process and how you actualize that.” Practically, this meant trading emails with owners Nicole Krasinski and Stuart Brioza, advising them on chairs, lamps, and material surfaces. Conceptually, it meant continuing the restaurateurs’ careers that started almost 30 years ago and have since been woven—sometimes loosely, sometimes tightly—into the changing design and financial landscapes of the past three decades.

A sense of concept and process and working everything out materially—with the hand—underpins all of de Lisle’s work, from a restaurant in Mexico (his first stand-alone independent project) to a pop-inspired Japanese-themed hotel in San Francisco’s Japantown, to the lamp that started it all. The designer has been working for more than 15 years, first independently as an industrial designer, then with two partners as an interior designer, and now with his own four-person firm in the city’s Hayes Valley neighborhood. His circuitous career path exemplifies the new randomness of design careers, where rather than a perfectly linear trajectory—school, small firm, bigger firm, own small firm, own bigger firm—the threads are more conceptual. Here it’s based on tactility, a love of making, and a deep sense of traditional roots.

De Lisle’s tradition begins on the east coast. He grew up in Massachusetts, the son of a colonial reproductions manufacturer and grandson of an “amazing machinist, wallpaper hanger, and jack-of-all-trades.” His father and grandfather ran a manufacturing shop that made small parts for bigger companies. “My grandfather would make these really intricate handmade jigs and tools,” de Lisle says. “They built the house I grew up in. It was just this Yankee mentality of, if it’s broken, you fix it.” At Hartford Art School, de Lisle wanted to be a graphic designer “like everybody else in the eighties.” Then an accident landed him a work-study position in the ceramics buildings, where he got to build all the kilns. “I started working with clay because I fell in love with it,” he says. A ceramics professor noticed the untrained potter’s enthusiasm, suggested he take a class, and within six months de Lisle had changed his major: “I loved this complicated nature of something that was cultural and craft-oriented and functional.” 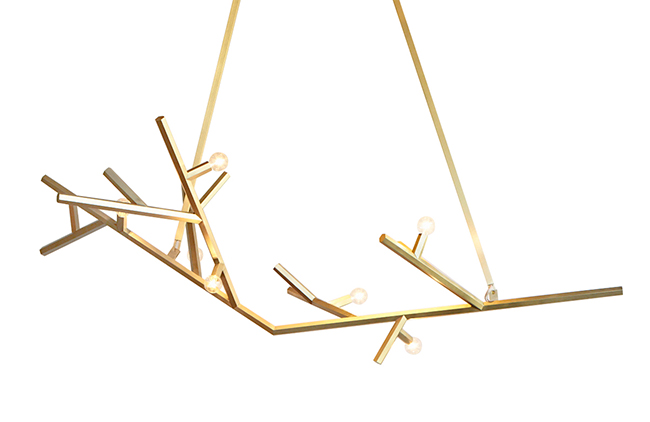 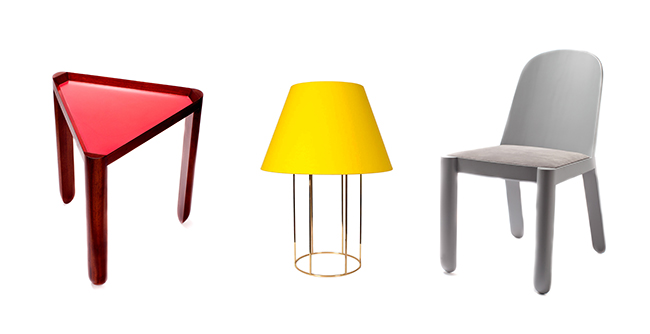 He graduated and moved west, to San Francisco, and worked in a studio in Oakland for two years. California College of the Arts was just down the street, and he soon met the head of the sculpture department there. He took welding lessons, and learned that as quickly and well as he had learned ceramics, because to him, they were cut from the same creative cloth.

“I could make things that were creative but referencing function,” de Lisle says. He began making tables and different types of lamps. “The way that you work with metal, the way you have to keep it in process, understand how to engineer it,” he says. “How you have to build a jig to hold the pieces of metal, so that you can construct the right kind of piece. I always loved that complicated nature of those specific ways of making art.”

Randomly, de Lisle met people in San Francisco who needed help welding stuff for their stores, like display racks, and then he did a little shoe store and “ended up falling in by accident with this guy who does events.” Suddenly he was welding objects for extravagant parties. And part of doing things for extravagant parties was being in really extravagant houses that, he realized, had been designed. “I’d never been in a kind of decorated house like that in my life,” de Lisle says of his first exposure to upscale Bay Area homes, “and then it started to register in my head, and    I remember asking the family that I worked with: What is this house?” It was more than just another cool discovery; it was an entire change of perspective. 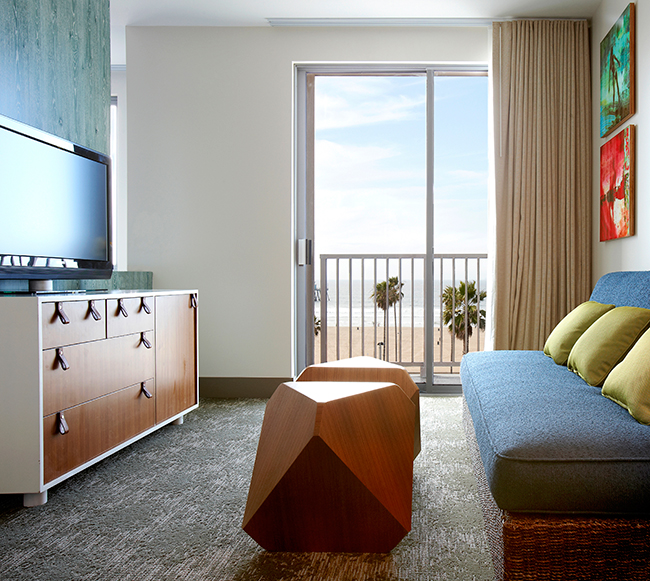 The Shorebreak Hotel (2006) was designed by de Lisle while he was a partner at De Lisle, Philpotts & Staub.

“I had this epiphany that this seemed like something I wanted to do—it used all these different skill sets that I had developed.” The interiors, according to de Lisle, “weren’t just rooms filled with furniture, they were an experience.” Except it isn’t necessarily easy to jump from being a welder and ceramist—even if you’re one as skilled as de Lisle was—to being an employable interior designer. A woman he met, who worked at Knoll in San Francisco, was excited about de Lisle’s new ambition, and introduced him to multiple Bay Area designers. They loved the work he was able to show them, but when they asked if he had any experience he had to admit: No, he just made stuff.

“It was a dead-end, a catch-22. You can’t get a portfolio unless you have a client, and you can’t get a client unless you have a portfolio.” He thought about going back to school to develop a portfolio, but decided instead to double down. “I spent a year developing a lamp,” he says. “I waited tables and quit my job so I could work at night.” His days were devoted entirely to product development. He found a company in Hayward, in the East Bay, that made exhaust manifolds for trucks and had bending machines he could use; he made a production model, found a lampshade manufacturer, figured out how to scale it, how to make it right, created a box and a label and put it all together. And then he did what every ambitious late-nineties designer did. He took it to New York City. 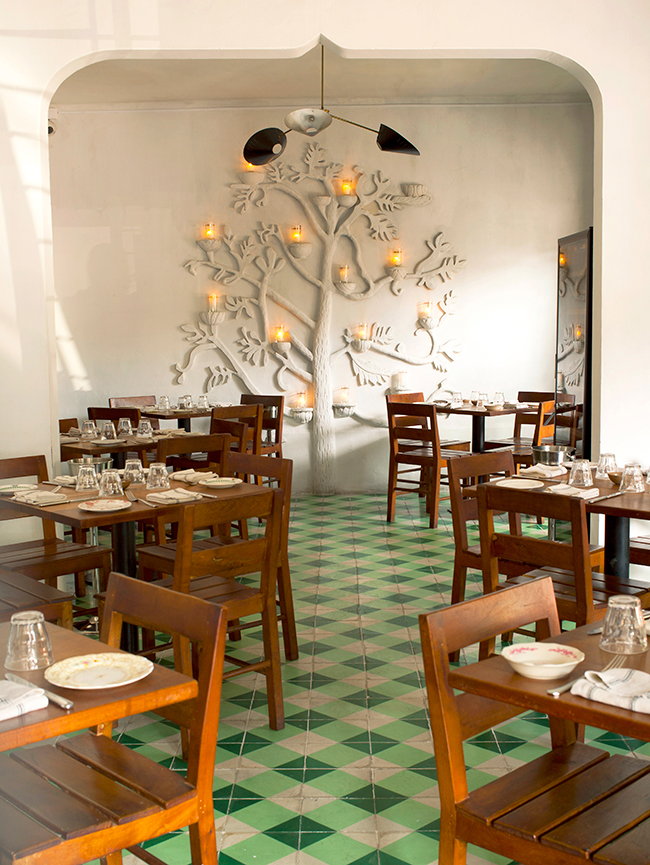 Maximo Bistrot (2011), which is rated number one in the Mexico City Zagat guide, was de Lisle’s first stand-alone project.

It was 1997 and one of the stores he went into was Troy, and Troy Halterman himself was at the front desk. He told de Lisle that he loved the lamp and would take 20. “I started making them in my kitchen, and then it got to the point where I was selling them in New York and L.A. and San Francisco.” A year later at the International Contemporary Furniture Fair he met Zahid Sardar, the former design editor of the San Francisco Chronicle. Sardar introduced de Lisle to a friend, Jonathan Staub. Staub bought 40 of de Lisle’s lamps for a hotel project, and asked him if he wanted to come work for him and his cousin Marion Philpotts. They had just started an interior design firm that eventually became De Lisle, Philpotts & Staub.

“A week later I was wiring lamps in my kitchen, and I was like, maybe this is what I was looking for,” he says. The internet had exploded and newly wealthy engineers needed designers. Within three months the firm had so many clients that Philpotts started giving de Lisle entire projects to manage.

The three of them worked together until four years ago, when de Lisle started his own company, and quickly realized that 2009 was the worst possible time to do so. “I didn’t have a lot of work going on, so I decided to take a break and booked a flight to Mexico.” It was there, in an eight-room hotel, that he ate a piece of fish at lunch and says it was “the best-prepared piece of fish I’ve ever had in my life.” Coming from the Bay Area, where people eat great food all the time, this was a surprise. 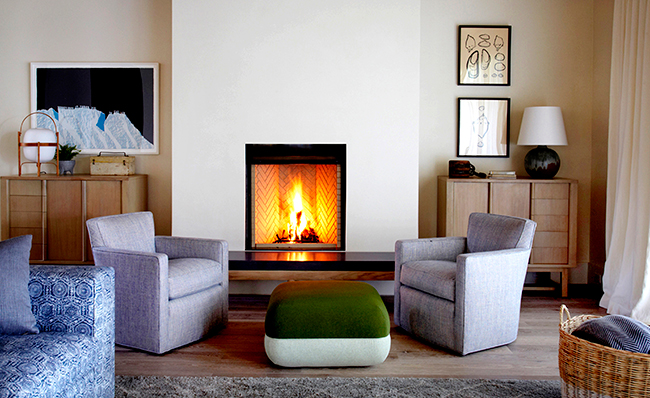 It turned out that the chef and his girlfriend wanted to open a restaurant, and six months after his vacation they got in touch and said they’d found a space. They couldn’t pay him, but could he help them in exchange for showing him around Mexico City? “They had no real budget, so we had to figure out how to make things.” The furniture was produced by a guy who cut up a tree from his field with a chainsaw. The ceramics came from a second-generation ceramics shop in Mexico City, and the linens came from a couple in Oaxaca. Everything was made by hand, and six months after the opening, it was named the number-one restaurant in Mexico City by Zagat. Now de Lisle is working with them on a six-room restaurant across the street (this time he’ll be paid).

High off the joy of working with a mom-and-pop operation, de Lisle was thrilled to be able to repeat it with his consulting for State Bird Provisions. And that, in turn, reminded him how much he missed making objects. He started creating lighting and furniture, collaborating with local craftspeople, such as a glassblower in Berkeley, a woodworker in San Francisco, and a chainsaw artist named Rick Yashimoto, with whom de Lisle made mirrors, chairs, and soon a dining table and wall shelf. And then, he went to Milan’s Salone del Mobile to check things out because he loved Italian furniture, and he met Dave Alhadeff, owner of New York City’s The Future Perfect, with whom he’s now collaborating on a collection that launched this year with a tree-branch chandelier.

So he’s back to a lamp, and craftsmanship, and selling a product in a game-changing design store, except that in the last 20 years design culture has shifted so much that even though it seems like he might just be circling the target, this is actually the next big step for de Lisle, the next move in a multivalent, all-encompassing career. “It’s like getting dressed,” he says of making design decisions. And in this case, the suit fits. 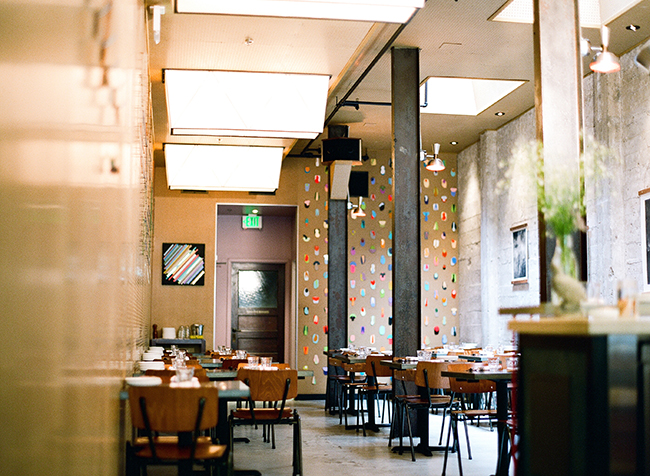