At Copenhagen’s Amass, Come for the Food and Stay for the Design 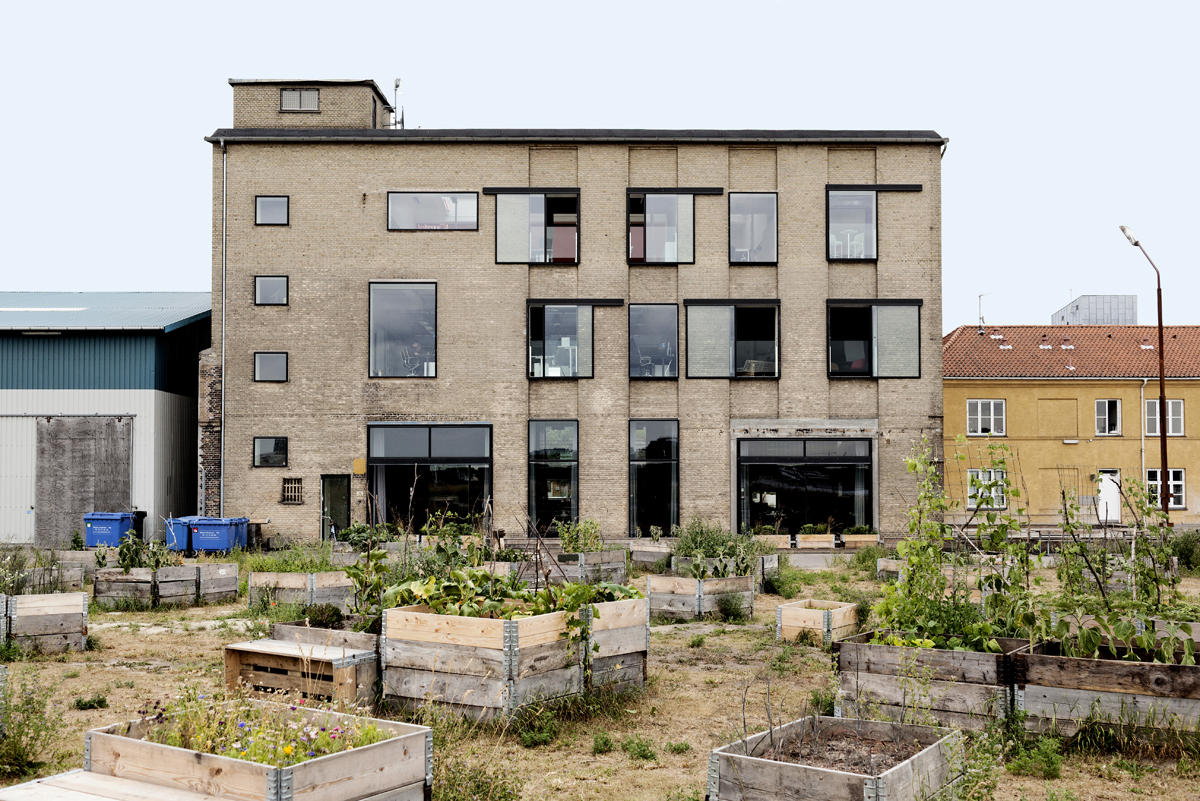 Come summer, guests at Amass can spill out into the garden that’s still growing outside Amass’s postindustrial home.

When you get off the Copenhagen harbor bus at Refshaleøen, you see raised-bed gardens that are spread out in front of an old industrial building. Some garbage containers stand among the gardens, but, in the summer, guests of a restaurant will stand around here, chat, and have their apéritifs. The building, with exposed brickwork, fading colors, and precise new window frames in black aluminium, is now home to Amass, the first restaurant opened by Matt Orlando, the former first chef de cuisine at Noma, a two–Michelin star restaurant repeatedly rated the world’s best in the San Pellegrino Top 50.

The Refshaleøen island has awaited gentrification since its former occupant, the world-renowned shipbuilder Burmeister & Wain (B&W), went bankrupt in 1996. The area lies at the other side of Copenhagen’s harbor front, a 30-minute ride from the city center through the campus of the The Royal Danish Academy of Fine Arts, The Royal Danish Theatre, and past some military institutions. Today, the creative industry is starting to move into the industrial neighborhood, with architects, designers, and artists setting up shop there. In 2014, the Eurovision Song Contest will be held in the old B&W assembling halls. Here, hidden in the former dockyard, is the widely celebrated Amass, which opened last July with a highly ambitious program and rather decent prices. 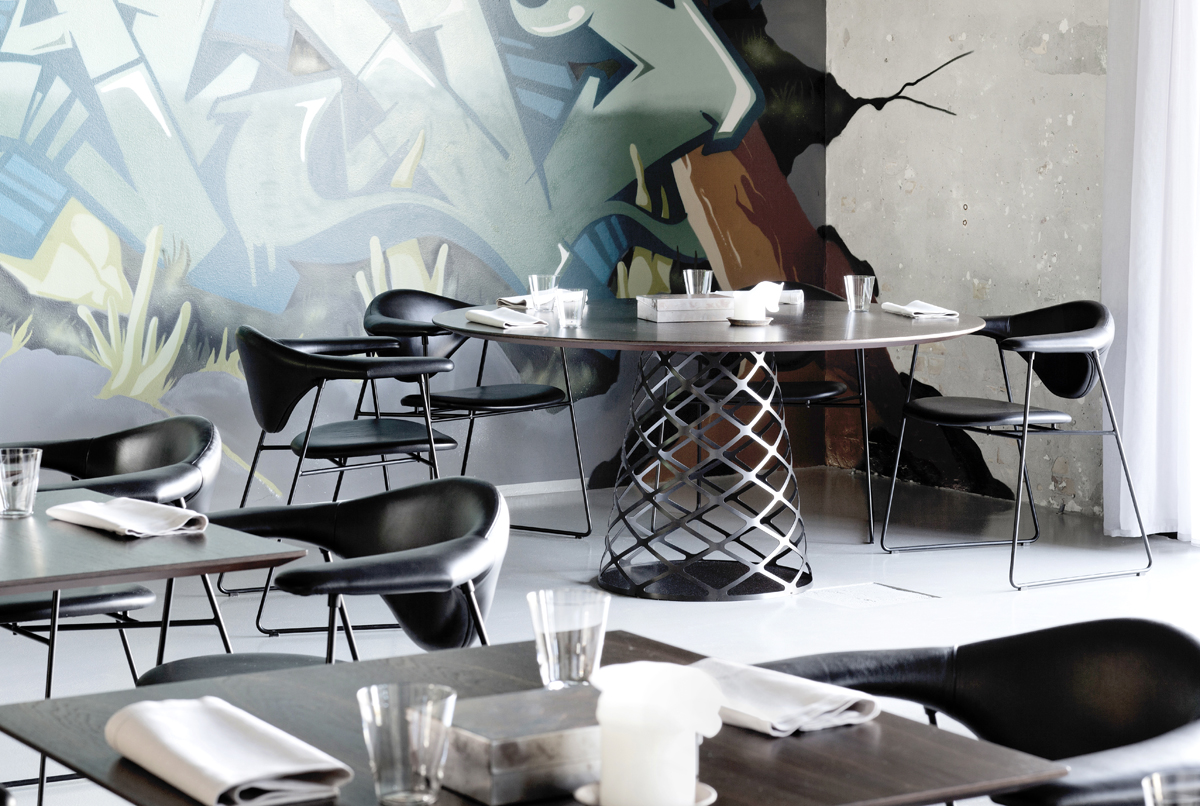 Inside, on the Aoyama table (designed with a distinctive spiral base by Paul Leroy, above), diners will reach for little metal boxes that contain their flatware.

The interior design of the restaurant, by Gubi A/S, is itself worth the visit. Jacob Gubi and his team designed and furnished Amass within a tight budget. “We aimed to create a crossover between industrial and luxury,” Gubi says. You enter the space through a staircase from the first floor, going down to the bar and a community table where—at least in theory—you can always find a place without booking in advance. The kitchen, the dining room, and even the office space of the restaurant, are in one big spatial continuum, emphasizing the idea of a restaurant as the collective experience and activity of the people who administer and order the ingredients, the ones who prepare and serve the food, and those who enjoy eating it. “The dynamics of the dining room changes completely and it instantly makes people more relaxed,” Orlando says.

So, despite the rough neighborhood outside and the industrial character of the building—the walls are all gray concrete, enlivened only by the occasional mural—the design manages to establish a wonderful atmosphere. The journey out to Refshaleøen ends with you sinking into the Masculo chair, designed by the emerging Italian-Danish duo GamFratesi for Gubi. Its fine leather finish makes you feel comforted as soon as you sit down to await what you know will be a wonderful dinner. 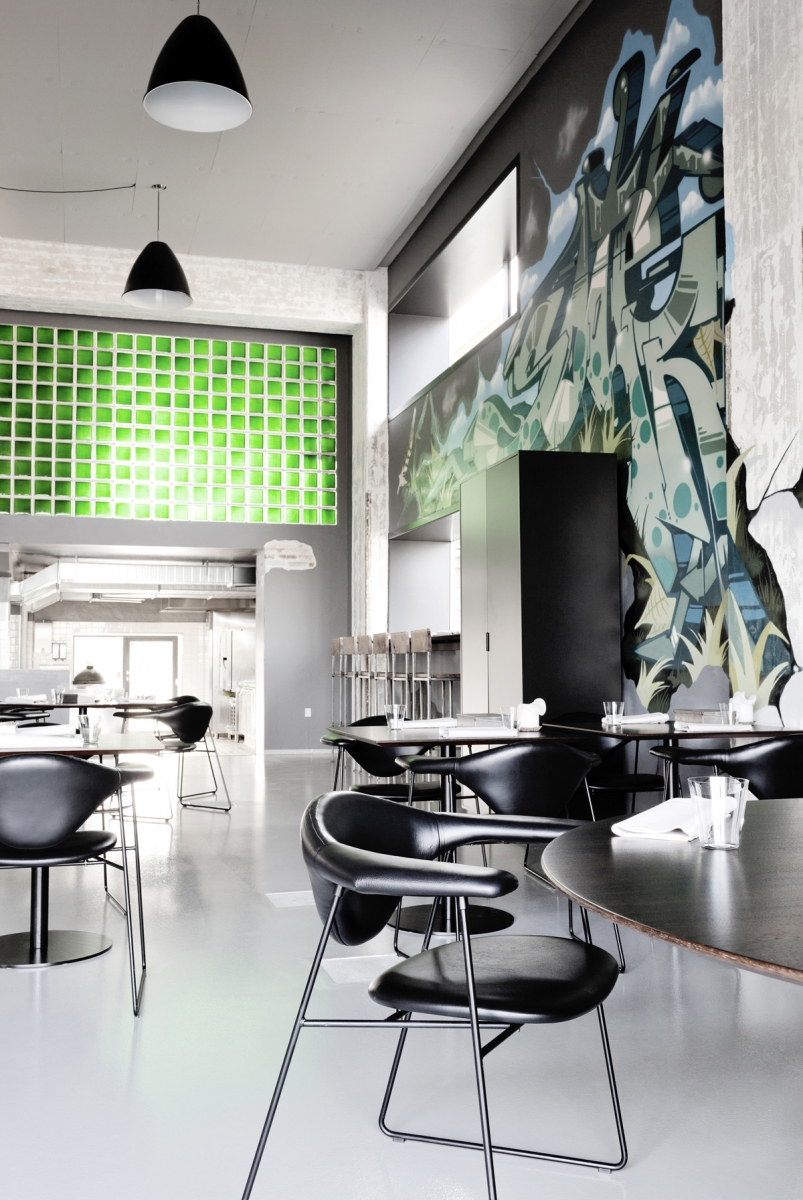 The austerity of the gray-and-concrete walls at Amass, a fine dining restaurant on Copenhagen’s water- front, is offset by the warm glow of the leather Masculo chairs, the soft light of the classic Bestlite pendants, and the matte reflections in the smoked-oak Gubi tables. Multiple seating options, including the bar or a community table, provide a casual contrast to the haute cuisine.

At the community table at Amaas, piled in little steel boxes, is a design icon—Grand Prix Flatware, designed in 1938 by the silversmith and craftsman Kay Bojesen, and recently reissued by his graddaughter Suzanne Bojesen Rosenqvist. In retrospect, Bojesen was one of the first industrial designers in Denmark, though he never described himself as such. A collaborator with legends like Finn Juhl and Arne Jacobsen, Bojesen brought a strict practicality to silverware, declaring that “the spout on a teapot must be made so it doesn’t drip.” His aim was to create “perfect” silver cutlery, and he came pretty close—Grand Prix gets its name from the award it won at the 1951 Milan Triennale, and became known as Denmark’s national flatware. Even when it fell out of production, it continued to be the de facto silverware at every Danish embassy. Now, it has a chance to shine again.—Avinash Rajagopal 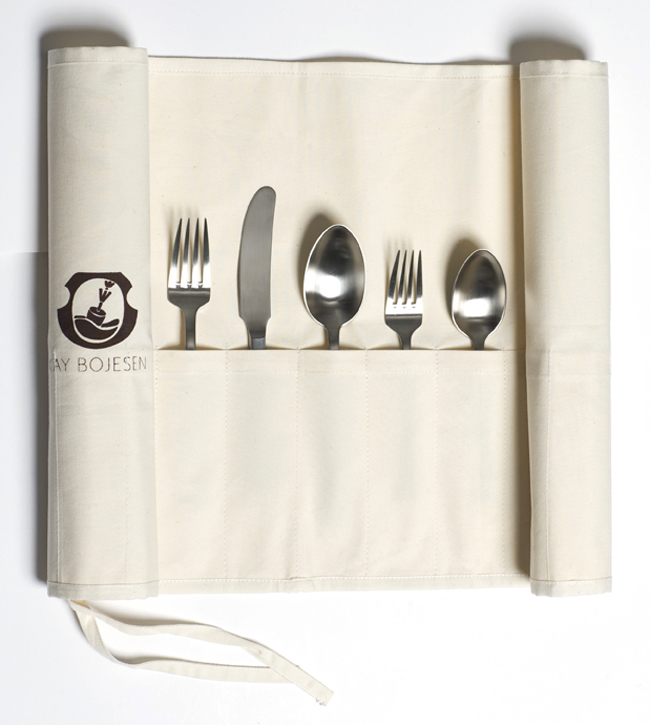